18 Great Big Things That Are Both Big and Great - Atlas Obscura
Want to see fewer ads? Become a Member. 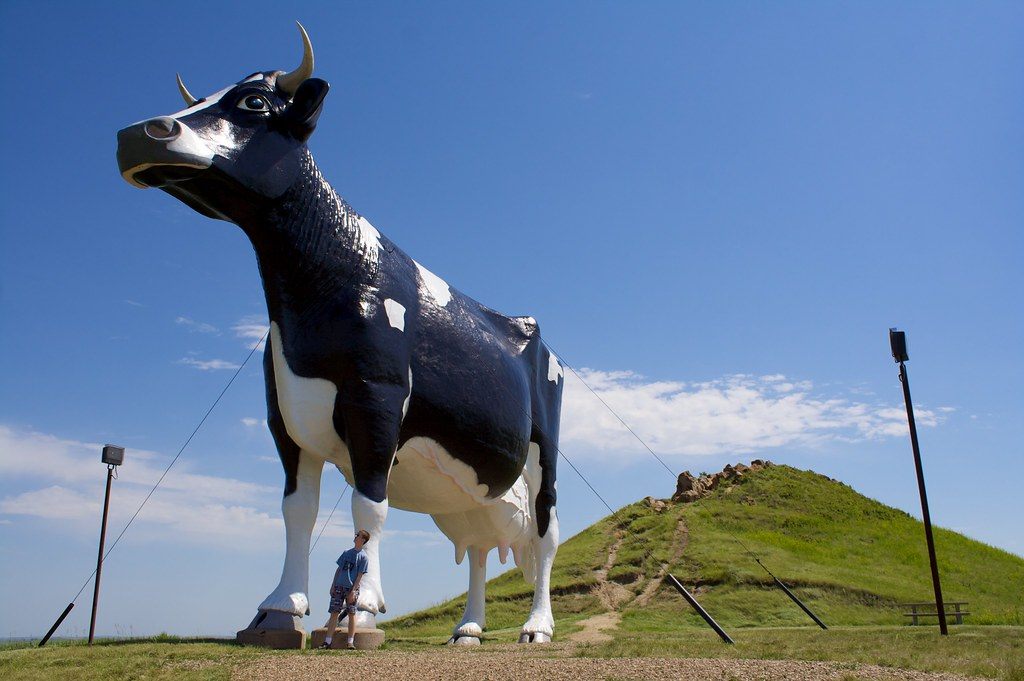 Some things are bigger than others. Nic McPhee/CC BY-SA 2.0
In This Story
Place

Seattle's super-sized cowboy apparel once belonged to a themed gas station that wrangled in herds of tourists.
Place

The record holder for the world’s largest peach.
Place

The largest axe on the planet contains a time capsule that seems like it may never be discovered.

What’s better than a duck? An absolutely huge duck, of course! All around the world (though especially in the U.S., Canada, and Australia), you can find “world’s biggest” versions of animals, fruits, everyday objects—essentially monuments designed make the mundane seem incredible. Erecting giant versions of things is such a popular pastime, in fact, that it’s almost impossible to catalog them all (though we can think of at least one person who’s giving it a go). Recently we asked Atlas Obscura readers in our Community forums to tell us about their own favorite big things. We got a large response.

Check out some of the best submissions below, and if you have a favorite “world’s biggest” attraction of your own that you’d like to recommend, head over to the forums, and keep the conversation going! It’s always a great time to be a great big thing.

“The Hat ‘n’ Boots, originally at this gas station in Seattle (hat hung over the office, and boots held the bathrooms). They were later restored and transferred to Oxbow Park.” — Asta

“The 15-feet-tall painted sculpture in front of City Hall.” — Asta

“Maybe not my favorite, but a fun one none-the-less. It can be found along Interstate 94 West, between the Southfield Freeway Interchange and Outer Drive overpass in Allen Park, Michigan. It was created by the Uniroyal Tire Company for the 1964 New York World’s Fair, as a Ferris wheel.” — PQPP3

“I was sure I had more of these, but particularly the Brobdingnagian Paul Bunyan and Babe at Trees of Mystery outside of Crescent City, California.” — MisterCustomer

“The world’s largest pysanka is in Vegreville, Alberta, Canada.” — ronlavoie

“The Peachoid, in Gaffney, South Carolina! My family drives past it almost every year, and never fails to gawk at it.” — quinnm321

“The tiny town of Casey, Illinois, along Highway 70, about an hour from Indiana, is home to seven of the world’s largest things (verified by Guinness) and a bunch of other big stuff. Golf tee, knitting needles, crochet hook, wind chimes, mailbox, rocking chair, wooden shoes. My family discovered it by accident a few years ago and we return once in a while to see what they have added.” — JeffSTL

“Next time you’re in Tulsa, pack a picnic lunch and head for the Blue Whale.” — maddie_on_the_move

“Also, right across the street at the amazing Marsh’s Free Museum (home of Jake the Alligator Man) there are a pair of the world’s largest chopsticks right in front.” — val

“I’m certain I’ve mentioned this before in another thread, but I love the Flanders Duck on Long Island. Much cuter than most oversized road attractions I think!” — maren

“Don’t know how I could have overlooked this as an Angeleno, but Randy’s Donuts and FREE THE TAIL-O-THE-PUP!” — MisterCustomer

It's check-in time for your memories of unforgettable travel lodgings.
world record

In the shadows with the world's best second-bests.
world's largest

How the U.S. Lost the Title for the World's Largest Chair

After a century of states battling it out for the honor, the current record holder is in... Austria.
science

But it's not the biggest.
Video • Wonder From Home