A Guide to the 58 Crazy Different Terms for 'Water' - Atlas Obscura
Want to see fewer ads? Become a Member. 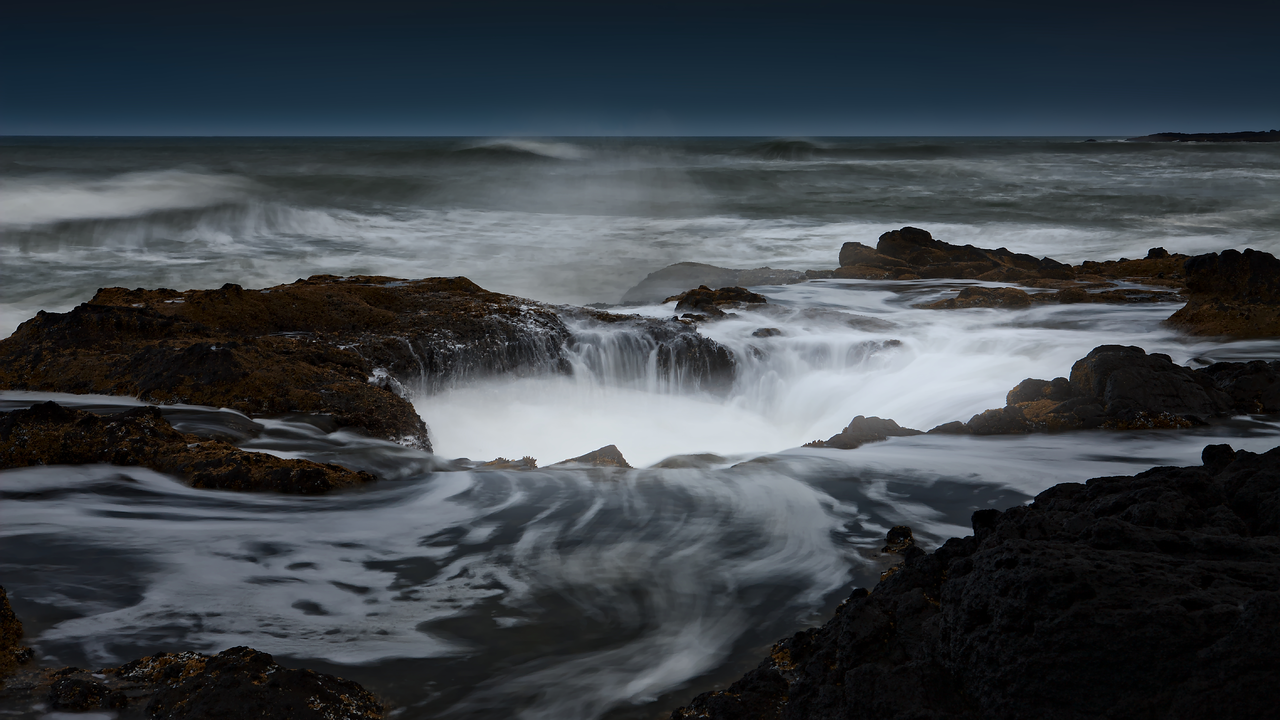 A sinkhole, Thor's Well, swallows the sea off the Oregon coast. Michel Matton/CC BY-SA 4.0
In This Story
Place

Where the sleeping monsters of Scotland's oil industry are left to rust.
Place

Source of the Nile at Jinja

A strangely forgotten claimant to the much contested title of "Source of the Nile."

Considering that humankind has from the very beginning subsisted on, resided near, and built civilizations around water, it’s not too surprising that English and other languages are overflowing with terminology to describe the various forms of aquatic geology. The precise definitions can be blurry, however. What exactly is a sound? What’s the difference between a bight and a bay? A sike and a ghyll? Why are there nearly 20 different words for a small stream?

If you live on the American seacoast, you may be pretty familiar with shoals and inlets, but perhaps things get fuzzy when trying to pin down the definition of the fjords found in Norway or a Scottish loch. If you’ve ever wondered about the wetter parts of the world, this guide is for you. Here is a rundown of the many different types of bodies of water, illustrated with examples of beautiful and unusual watery wonders in the Atlas. Dive in.

The distinction between the most common terms for flowing water—anything with a natural current moving from high to low—is roughly defined by size. As the old adage goes, “you can step over a brook, jump over a creek, wade across a stream and swim across a river.” A stream (#1) tends to be the generic term for flowing water; a river (#2) is the largest, while a creek (#3) is a small stream and a brook (#4) is even smaller, generally used in Old English and often babbling.

What about a large stream? In Scotland and England that’s sometimes called a burn (#17). A spring (#18) is when water flows up from under the ground to the surface. A bayou (#19) is very slow moving water, generally a tributary of a lake or river that is sluggish and marshy and filled with vegetation. A tributary (#20) for that matter is any stream that flows into a larger main stream or river, while a distributary (#21) is the opposite: a stream that branches off from the main river and flows away from it. A meander (#22) is just what it sounds like, a turn or bend in a winding river.

A horseshoe-shaped meander of the Colorado River swirls around a 1,000-foot-high pedestal before flowing back through the Southwest. (Photo: MassimoTava/CC BY 3.0)

A freshet (#23) is a sudden flow of freshwater from rapid heavy rain or melting snow after a spring thaw. (It can also mean the place where a river or stream empties into the ocean, combining freshwater into salt water.) In that realm, an estuary (#24) is where a river empties into the sea—the place where the mouth of the river meets out the ocean tide. And the headwaters (#25) is the source, the very beginning of a river or stream.

This small spot along the shoreline in Jinja, Uganda marks the place where, 1858, John Hanning Speke “discovered” the Nile’s headwaters at Lake Victoria, though the claim has long been contested and controversial. (Photo: Stefan Krasowski/CC BY 2.0)

There is sweeping category of bodies of water that are either partially or entirely surrounded by land. The former is often found in coastal areas where the shoreline curves in, like a long broad indentation, so the sea is partially surrounded by land but with a wide mouth connected to the open ocean. A gulf (#26) is the largest of these broad inlets, and tends to have a narrow mouth opening to the sea. Smaller than a gulf is a bay (#27) which is also largely landlocked but with a wider mouth. Smaller still we call a cove (#28), a small recess or indent in the shoreline that forms a sheltered nook with a narrow entrance. A cove will have just a narrowing opening to the sea, while a bight (#29) is a wide indent of the shore, like a bay but smaller and broader—these bights were historically a perfect safe harbor for pirates.

Speaking of harbors (#30) these are defined as any area of water where ships can anchor and be sheltered from the rough waters and winds of the open ocean. That’s slightly different than a port (#31), which are specifically defined as any geographical area where ships are loaded and unloaded. In a similar vein, a sheltered body of water near the shore but slightly outside the enclosed harbor is sometimes called a roadstead or “roads” (#32). Here, ships anchor while they wait to enter the port.

We all know the term for a large body of water surrounded by land on all sides; that would be a lake (#33). A pond (#34) is just a smaller version, and often formed artificially. A particularly shallow but broad sheet of standing water is sometimes referred to as a mere (#35), particularly in Old English dialects or literature. Even smaller and shallower is a puddle (#36), typically consisting of dirty rainwater. On the flip side, a deep body of still freshwater forms a pool (#37). And a tarn (#38) is a small pool or lake found in the mountains, sometimes with steep banks formed by a glacier.

Things get interesting when the body of water is almost entirely surrounded by land. An oxbow lake (#39) is formed when a wide bend in a river is eventually cut off from the main stream entirely by erosion and becomes a free-standing pool of water. It’s named for its characteristic U-shaped curve, resembling an oxbow. A lake or inlet of the sea that is nearly landlocked is sometimes—primary in Scotland—called a loch (#40).

A freshwater Scottish loch on the Highland Boundary Fault, Loch Lomond is the largest lake in all of Great Britain as measured by surface area. (Photo: wfmillar/CC BY 2.0)

The English language has various ways of defining places where the sea projects inland—either as an indent in the shoreline like a bay or gulf, or as a more narrow water passage opening from the coastline. The common term for this is an inlet (#41), also called an arm of the sea or sea arm (#42).

A firth (#43) a regional word used in Scotland, is similar in that it’s a narrow inlet of the sea, or a large sea bay, or long arm of the sea. A fjord (#44) is a long, narrow inlet flanked by steep cliffs on three sides and is connected to the sea. It’s formed when a glacier cuts a U-shaped valley below sea level that fills with sea when the glacier retreats. They’re common along the Norwegian coast, an elongated arm of the sea that’s longer than it is wide.

A sound (#45) is an ocean inlet even larger than a bay and wider than a fjord—specifically a part of the ocean between two bodies of land, like a wide inlet parallel to the coastline flanked by a nearby island. A channel (#46) is also constrained on two sides by banks, but is specifically a bed of water that joins two larger bodies of water. A strait (#47) is similar to a channel only narrower.

A lagoon (#48) is a shallow elongated body of water separated form a larger body of water by a sandbank, coral reef or other barrier, while a barachois (#49) is a coastal lagoon separation by the ocean by a sand bar that may periodically get filled with salt water when the tide is high.

Giants chunks of ice may not be exactly what comes to mind when you picture a lagoon, and yet the largest lagoon in Iceland is a beautiful pool of stunning multicolored icebergs formed by melting glaciers. (Photo: Daniel Knieper/CC BY-ND 2.0)

There are some aquatic terms that are a bit more unusual. A billabong (#50) before it was a surfwear company making boardshorts, defines where a river changes course and creates an isolated stagnant pool of backwater behind where the former branch dead ends. A kettle (#51) in addition to boiling water for tea, is a sort of pothole formed from retreating glaciers or draining floods, hollowed out when buried blocks of glacier ice melts.

These Massachusetts glacial potholes, or “kettles,” were ground down by granite by a whirlpool effect of water and gyrating stones. (Photo: aliwest44/CC BY 2.0)

A narrows (#52) is a narrow water passes where a strait or river passes through a vertical bed of hard rock. A lee (#53) can refer to as a natural body of running water flowing under the earth (though more commonly means the sheltered side of a ship or other object facing away from the wind). A canal (#54) is an artificial waterway meant for travel, usually connecting two other water bodies for ships to navigate. A shoal (#55) is a place where the sea, river or another body of water is shallow but the submerged sandbank is exposed at low tide. An oasis (#56) is a fertile spot in the desert where water comes from an underground spring.

Known as the “Oasis of America,” Huacachina in Peru is one of the only true desert oases in the Americas. (Photo: Carlos Adampol Galindo/CC BY-SA 2.0)

Finally, though they’re often used interchangeably, there’s a linguistic difference between the ocean and sea. An ocean (#57) is the largest body of water there is, divided into five geographic bodies. Seas (#58) are generally parts of these oceans, located where the ocean and land meet. Used in the singular, however, “the sea” is used to mean the continuous body of salt water that covers most of the Earth’s surface—an interconnected global ocean blanketing the planet.

You can thank the moon's gravitational pull for these nine extraordinary sights.
science

The explanation behind a "drastic," bone-chilling, mysterious weather event in the Upper Midwest.
mythology

It's not just a recreational hotspot—it's also an ecosystem.
Video • AO Docs