Why Winemakers Are Adding Seawater to Their Wines - Gastro Obscura
Want to see fewer ads? Become a Member. 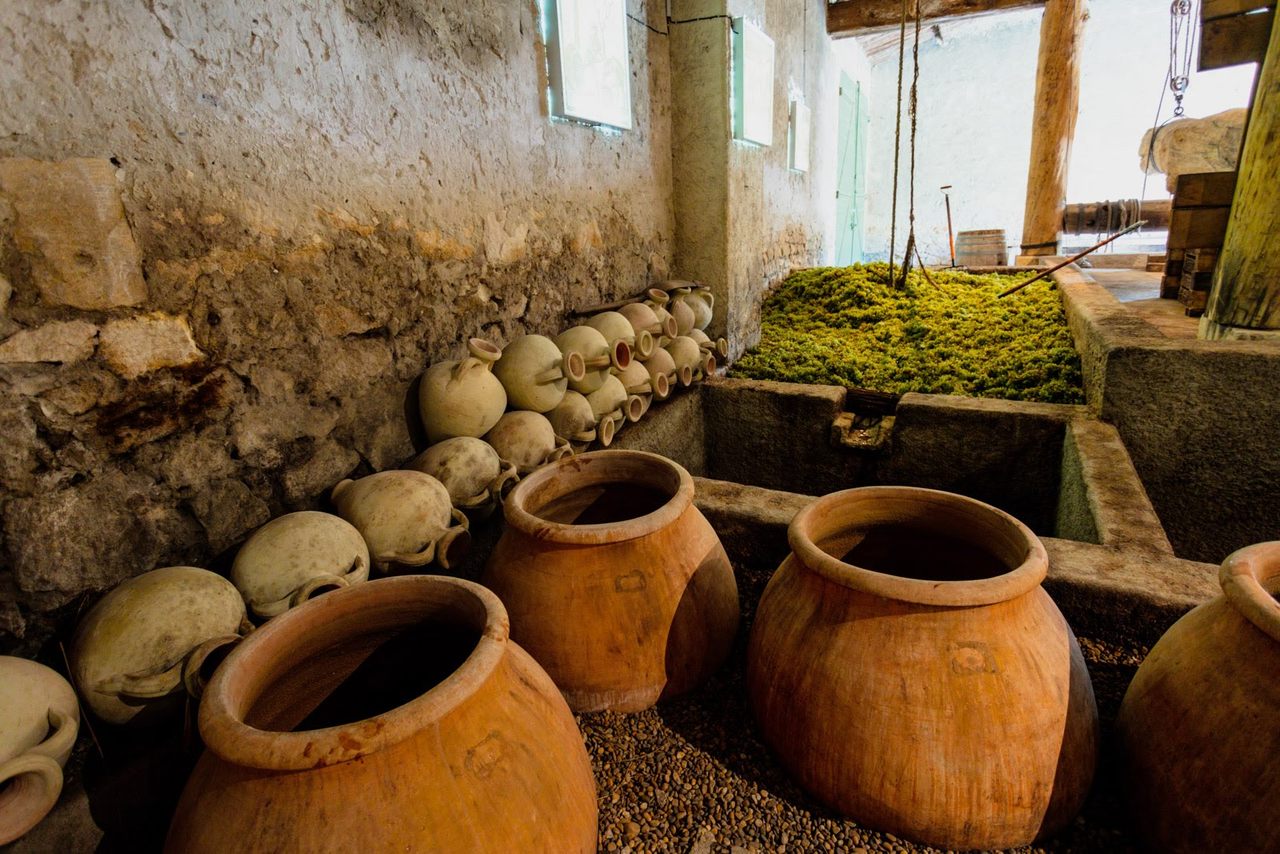 A winery built on the site of a Gallo-Roman estate uses historical tools to recreate ancient vintages.

For more than two decades, Hervé Durand has been offering visitors the opportunity to travel back in time some 2,000 years. Not by operating a time machine. Instead, he hands out glasses of wine.

Each year, on the second Sunday in September, Durand leads an “experimental archaeological adventure” at his Mas des Tourelles vineyard in the lower Rhône valley. In partnership with the French National Center for Scientific Research, he turns his harvest into wines that taste like Roman times, made according to the historical writings of authors such as Pliny the Elder and Lucius Moderatus Columella, a prominent authority on agriculture in the Roman Empire. Even amid the pandemic, visitors came to (safely) sample wines not found on the shelves of any wine store.

Durand’s interest in the winemaking techniques of ancient Rome goes deep—his family estate stands atop the remains of a Gallo-Roman villa, one of the largest sources of Roman wine production during antiquity. While Durand uses modern techniques to make Syrah and other popular varieties, he also mixes honey, plants, and fruits into his wines, following recipes popular among the Greeks and then the Romans. Out of his amphorae pours Mulsum, which literally means “honeyed” in Latin and was enjoyed as an aperitif by the Romans, and Carenum, whose recipe calls for warming the wine with quinces and was left to posterity by the poet Rutilius Taurus Aemilianus Palladius.

The wine that draws the most attention, though, is Turriculae, which Durand makes by following Columella’s writings to the letter. After trampling the grapes, Durand and his staff fill the 2,000-year-old dolium (a sizable ceramic storage jar used by the Romans) with the must. “They will be filled to the brim, so that when fermenting, the wine is purged well,” Columella explained in De Re Rustica, his memoir filled with notes on farming. In the Tourelles wine cellar, which recreates the historic site, complete with pottery kilns, a wooden lever press, and earthenware vessels, they sprinkle in ingredients favored by the Romans, such as ground fenugreek and iris. Then they add a surprising final ingredient: seawater, which gives the wine a curious and unexpected salinity.

By pouring seawater into his wine, Durand is following a great, if largely forgotten, winemaking practice. The first references to it appear in writings on Coan wine produced on the Greek island of Kos, known for its mix of sweetness and salinity. Around 160 B.C., indicates Jennifer P. Moore, an associate professor of Anthropology at Trent University, Cato the Elder included a step-by-step recipe in a farming treatise. The seawater, she notes, was to be collected far from the shore and in calm waters—conditions under which the salt content would have been optimized. Adding seawater to wine helped the perishable beverage last longer in the same way that salt was used for millennia to preserve meat and other foods.

Durand is not the sole winemaker to splash seawater in his vintages. Portuguese winemaker Dirk Niepoort heard about the practice not from Pliny’s notes, but through a traditional wine producer from the Azores who used the technique to allow his bottles to endure longer. Since Niepoort, who produces some of the most esteemed Port wines in Portugal, wanted to make his wines lighter, he decided to try it out. “Especially because minerality,” he says, “has become a growing trend in the wine scene.”

He encouraged two distinguished vintner friends, Anna Jorgensen, in the Alentejo region, and Anselmo Mendes, in the Vinhos Verdes region, to join him in the experiment. Jorgensen added seawater to a 500-liter barrel—filled with grapes grown just two kilometers from the Atlantic—until it was 1 percent saltwater. Mendes went further, testing 1 percent, 5 percent, and 10 percent mixes in 25,000-liter stainless-steel vats. When the winemakers tasted the results at the Mendes winery, they agreed the 5- and 10-percent dilutions were unpleasant. But they enjoyed the tangy, salty flavor of the 1-percent wine. According to Mendes, the water dilution was imperceptible, but the salinity gave “more life” to the wine.

“As it is common with food, a pinch of salt is important to ‘awaken’ other flavors,” says Mendes. “Wine already has the sweetness from the grape sugars, the acidity from the fruit, and its tannins’ bitterness. So salinity is very welcome to balance the flavors.” (To experience this at home—without stomping grapes or taking a bucket to the beach—try adding a pinch of salt to red wine.)

For him, the experience showed that saline notes can produce a more harmonious, “well-balanced,” “round” wine—regardless of whether that salinity comes from mixing in saltwater or from the grapes themselves. “When looking for a way to make wines that could last longer, these ancient winemakers showed us that we can be inspired by their ideas to make better wines even today,” says Mendes. With more technology and more knowledge, of course, but still by learning from the past.

In 1936, the Party suddenly switched from denouncing bubbly to mass producing it.
wine

It's a reminder of when Florentine families sold wine from their palace cellars.
bars