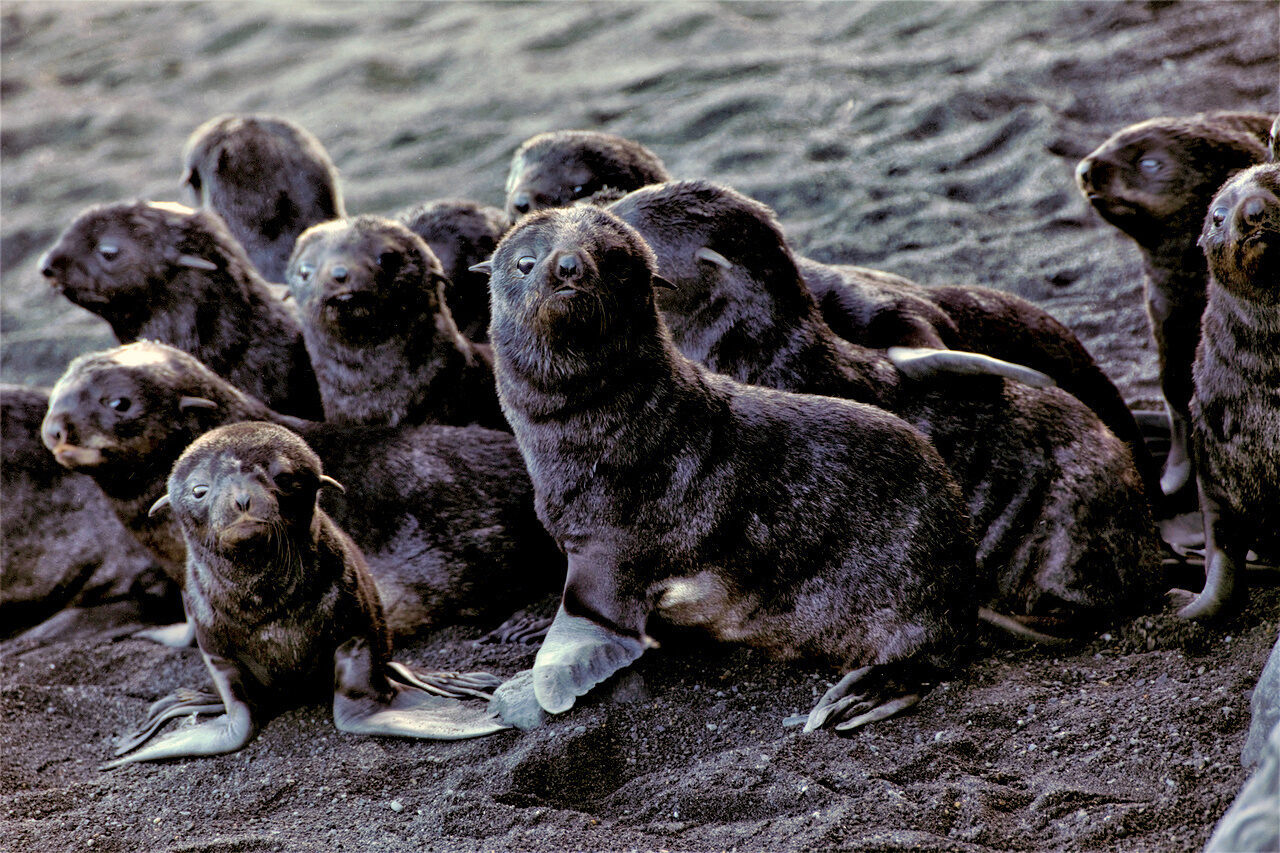 For certain Alaskan seals, home sweet home is a steaming volcano. Northern fur seals were once hunted to the brink of extinction by Russian fur traders, and are currently competing for prey with commercial fishing fleets. Yet they have found a strange sort of oasis on Bogoslof Island, a tiny patch of land that is technically the tip of an undersea volcano, Dan Joling reports for the AP. Bogoslof is riotously active, constantly burping mud and hissing boiling-hot steam. It’s a curious choice of breeding grounds for any creature, let alone a fur seal.

Located around 31 miles north of the main Aleutian Islands, Bogoslof is little more than a speck, with a land area of about half a square mile. “Only about a tenth of a percent is sticking out of the water,” says Chris Waythomas, a research geophysicist who works for the U.S. Geological Society at the Alaska Volcano Observatory, and who studied Bogoslof’s activity in two expeditions in 2018. “You could easily walk all over the place, if it weren’t for the seals,” he says. The animals are fiercely territorial, with big bodies and teeth. Waythomas calls them “girthy.”

Bogoslof is a richly studied volcano, with a history of eruptions dating back to the 1700s. The island first landed on a map in 1772, after a Russian expedition surveyed the Aleutian Islands under the command of Empress Catherine II. According to a 2018 USGS report Historical Eruptions and Hazards at Bogoslof Volcano, Alaska, authored by Waythomas and geologist Cheryl E. Cameron, the island also has various indigenous names, including Agashagok, Tanaxsidaagux, and Agasaagux, a name given by the Aleut inhabitants of the Aleutian Islands. In 1778, Captain James Cook spotted the island and described its tower-like outcropping.

The first mention Bogoslof’s seals appeared in an 1817 monograph by the German scientist Heinrich von Langsdorff, but no one dared go near the island, due to a persistent layer of fog that never went away. When a local Aleut man attempted to go to the island to harvest the seals, he returned “in the utmost terror and astonishment,” having discovered that the sea surrounding the rock was literally boiling, von Langsdorff wrote. Some historical reports describe fur seals with their skin scalded off, Waythomas says. “This was probably the result of hot water being expelled without warning and landing on the seals,” he says.

In 1906, a scientist named Robert Dunn managed to visit Bogoslof and climbed on top of the cooling lava, which he wrote “was as stable as chocolate fudge” in a 1908 piece for Outing. Dunn’s purple prose compared the lava dome to “the beak of a parrot with head in air” and described the spire within the lava dome as “almost sheer, and smooth as a billiard ball, as if tempered and polished in its hot excursion up from Hades.”

The center of Bogoslof contains a veritable field of fumaroles, vents that release volcanic gases into the atmosphere. They roar as loudly as jet engines and spurt mud geysers as high as 16 feet, Waythomas says. And each fumarole is around the boiling point of water, 212 degrees Fahrenheit, which can prove deadly to mammals. “What with the small geysers and boiling mud pots, it’s pretty steamy,” he says.

This boisterous environment makes it incredibly difficult to study Bogoslof’s seismic activity. The researchers wanted to place a seismic station on top of solid rock, but the only solid rock on the island is surrounded by fumaroles and steam. So they placed a station on a pile of less-stable pyroclastic deposits, resulting in less-reliable data on Bogoslof’s quakes.

The seals, at least, are easier to study by virtue of being, well, everywhere. Waythomas says Bogoslof has the densest population of seals he’s ever seen in his years surveying Alaskan islands. Their abundance at Bogoslof is significant because—even after commercial harvesting ended in 1988—the seal population never quite bounced back, Tom Gelatt, a fisheries biologist with the National Oceanic and Atmospheric Administration, tells the AP. In fact, Gelatt estimates that the population of pups on Bogoslof in 2019 will top 36,000. Gelatt theorizes that the seals come to to hunt in nearby deep waters, which contain such seal delicacies as squid and Northern smoothtongue. Because food is plentiful, nursing mothers can wean larger pups faster than fur seals at other islands, Gelatt says.

The sheer abundance of fur seals also brings about an unwelcome abundance of other species. “That first summer we saw a lot of pups on the beach learning how to swim,” Waythomas says. “At the same time, we saw killer whales in the area teaching their pups how to hunt.” He remembers watching the seals racing back to shore in an attempt to escape the orcas. “The seals’ moms and dads were more than a little stressed out,” he says.

But the colony of seals seems to have a handle on their unstable home. “I get the sense that they’re pretty tuned into their surroundings,” Waythomas says. “When things start to get going, they head into the water.” His team did spot a few dead seals on their two expeditions, but he says it seems unlikely the animals were killed by any kind of volcanic activity.

According to Waythomas, the real danger to Bogoslof’s seals isn’t a future eruption, but the surrounding seas. In 2016 and 2017, eruptions shrank parts of the island with explosions. It also created new real estate with chunks of rock blown from lava vents, but the new land is vulnerable to wave erosion. “A couple of big storms could remove a lot of the island,” Waythomas says. “We don’t know how long it will stay like that.”

Signs of recovery for the so-called "puppies of the sea."
islands

Why Scientists Snorkled Behind Bumphead Parrotfish in Pursuit of Their Poop

To learn whether these giant, goofy fish are good or bad for beleaguered coral reefs.
islands

Though not much to see, Mount Stromboli is a scientist’s dream.
islands

Human harm is burned into Réunion’s ecological record.
Read more
Thanks for sharing!