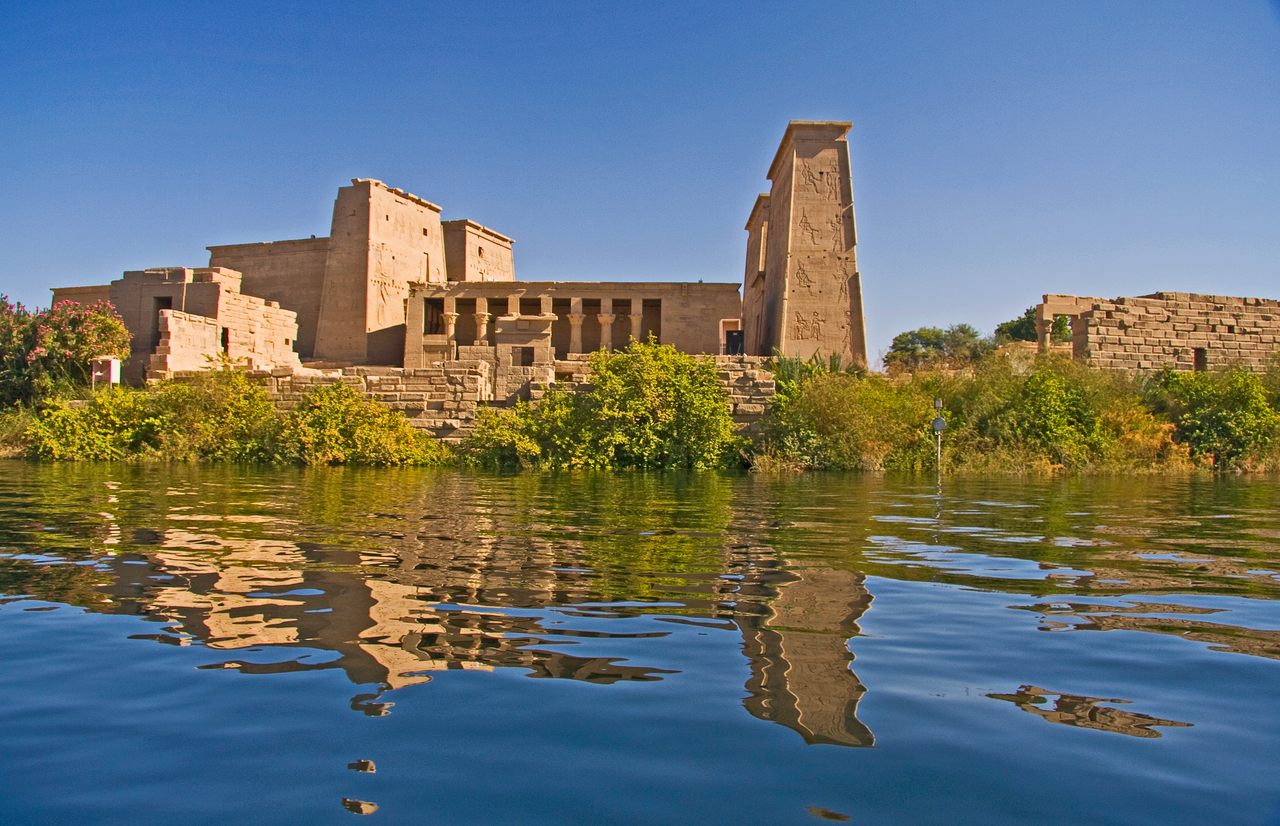 Near this ancient Nubian island temple dedicated to the goddess Isis, the Nubian Queen Amanirenas defeated the Romans. Matt Champlin/Getty Images
In This Story
Place

These Nubian pyramids are strange and unique, even by pyramid standards.
Destination Guide

It’s 30 B.C. and Cleopatra is dead. Egypt is a Roman colony, but Rome (being Rome) wasn’t satisfied. And why would they be when the wealth of Nubia—with its gold mines and elaborate temples—lay just to the south? But Nubia’s queen and sole ruler, Amanirenas, wasn’t going to sit idly by. In a preemptive attack, Amanirenas and her forces bested the Romans at Philae and Syene (Aswan, Egypt, today). She toppled statues of Roman Emperor Augustus and even buried one statue’s decapitated head under the grand entrance of her palace—an elaborate, and no doubt costly, insult. In 24 B.C., Rome had finally had enough and the two kingdoms negotiated a peace.

Amanirenas’s rise to power in ancient Nubia, or Kush, as the political state was called, wasn’t unprecedented. For more than 3,000 years, three Kushite kingdoms—Kerma, Napata, and Meroë—dominated the Middle Nile Valley, in what is today southern Egypt and northern Sudan. These kingdoms had many periods with strong female rulers like Amanirenas. “It just gets better and better for women” during each of these successive kingdoms, says scholar Solange Ashby of the University of California, Los Angeles. By the later Meroë period, five sole female rulers had come to power, including Amanirenas. Even the queens who ruled alongside kings still possessed immense power. The queens of Kush were no consorts.

While Egypt’s Cleopatra and Hatshepsut are household names today (by ancient Egyptian standards), few people have heard of Nubia’s mighty queens. Atlas Obscura spoke with Ashby about the Nubian legacy, expressions of female power, and how the study of ancient Nubia connects to Black Lives Matter.

How did you first become interested in Nubia’s queens?

I think that Nubia, certainly in the African-American community and probably in the larger African diasporic community, has had an important place in the cultural understanding of ourselves as African people. I mean, there’s easily 100-plus years of African Americans studying and writing about ancient Egypt and Kush. There’s this expression on Black hair products, “the Nubian Queen,” or people will say to a woman on the street, “Good morning, Queen, my Nubian Queen.” So that is very much woven into popular Black American culture.

And so I always had it on my radar, but thought of it as sort of a mystical, made-up place. But then I went to visit the Boston Museum of Fine Arts in my 20s, which has an amazing Nubian collection. Seeing actual objects, such as amulets from queens or jewelry or stele with depictions of queens on them, made it real and really gave me a hunger to know more about it.

What do we know about the role of women in ancient Nubia?

They seem to have had a very profound ritual role. Throughout Nubia and also into Egypt, there are these really large prehistoric rock art depictions of voluptuous women, often decorated with swirling designs or triangle shapes. The fact that women could bear and bring forth life seems to have been very important to the ritual practice in the ancient Nile Valley. Then we see the Nepatan queens, starting around 900 B.C., holding titles that say that they are chantresses of Amun. They are priestesses of Hathor. Women seem to have been very deeply incorporated into the ritual life of Nubia from prehistory, all the way down through the end of the Meroitic period, certainly, and even into Nubian Christianity.

That is very debated. But what I see are kings such as Amanikhabale, who explicitly lists seven generations of his female lineage. It seems to me, and I’m certainly not alone [in thinking this], that he is claiming his right to ascend to the Kushite throne because he is descended from this lineage of prominent women.

How does the role of women shift during each Kushite kingdom?

It just gets better and better, and they become more and more powerful.

We don’t know the names of any of the Kerma rulers. I think it’s assumed that they were all men. Elizabeth Minor has written an article about one very high-status woman who was included as a subsidiary burial within one of those great Kerman tumulus burials. And we do see women depicted in ritual roles.

In the Napatan period, we see the queens become almost co-rulers. Their presence seems to be essential to this idea of maat, the balance between the male and the female in royal power. The mothers of kings need to be present when their sons are having their coronation rites. We have Nubian princesses who are serving as the ritual role of god’s wife of Amun in Egypt.

And then it just sort of goes into turbo drive in the Meroitic period. The period starts off with Meroitic kings. And then probably in the second or first century B.C., we have the earliest sole ruling Meroitic queen. And because the Meroites did not write down things anywhere near as frequently as the Egyptians did, the chronology of these rulers is still disputed. But the woman who was buried at Begrawiya North 11 [a lavish pyramid in an ancient Nubian cemetery complex 150 miles north of Khartoum], whatever her name was, she seems to have been the first sole ruling Meroitic queen.

Interestingly, it seems that during her reign, the indigenous Meroitic writing system came into being, so she was a very innovative ruler. She’s followed pretty quickly by another three ruling queens. Even when we get out of this classical period for the Meroitic Kingdom, which was the time when these women were ruling back-to-back, women continued to come to the throne.

Do you have a favorite Kushite Queen?

I do! Her name is Amanitore, and she ruled with her husband. And they just built so much, and so they’re really well-attested for throughout the Meroitic heartland, especially at a site called Naqa. There’s a whole series of temples dedicated primarily to the god Amun, who’s very tightly related to Kushite kingship. It was the golden age for the Kingdom of Meroë, and they were seemingly at the peak of their power and had incredible wealth.

The most dramatic image of this couple is the two of them on the pylon, the monumental gate at the lion temple at Naqa. They are each holding enemy people by the hair and getting ready to bash their brains out. It is a really powerful image of female power in ancient Africa.

Why have scholars so overlooked ancient Nubia?

You can’t just say I want to get a doctorate in Nubian history, language, culture. All of us who study ancient Nubia are trained as Egyptologists. And Egyptology has a very condescending and negative attitude toward Nubia. Since Egypt ruled Nubia as a colony for 500 years, the discipline absorbs and stresses the negative description of Nubia that we find in the ancient Egyptian texts. The Egyptians present Nubians as their wretched colonial subjects, and then 19th-century European scholars also came in with a colonial mindset and perpetuated that.

I think it is continuing. I’m certain the reason is that Egyptologists don’t receive any training about Nubia. That is part of what I will be changing as I become a professor at UCLA. I’m really hoping to grow an entire program where a student could elect to specialize in Nubian history.

Having said that, I think several factors are shifting or inspiring a change. The government of Qatar has funded a lot of excavations in Sudan. And so much more fieldwork is being done by international archaeological missions—the Polish, the Czechs. There are American excavations there. We’re just every year learning more and more about ancient Nubia.

And then there’s the whole reckoning with the murder of George Floyd and the prominence of Black Lives Matter. We seem to have endless cyclical racial reckonings. But the fact that we are in this moment again has made even conservative organizations, like our academic organization for Egyptology here in the States, sponsor a series of four lectures on Nubia. I mean, that’s new and very radical for my supremely conservative field. So, little by little. I am 100 percent certain that that is the reason why I have a position now at UCLA. All of a sudden Egyptologists are saying, “Oh, maybe we should deign to learn, teach, and write about Nubia.”

What surprised you most about researching these Nubian queens?

What I loved the most, and I don’t know if it’s the same as being surprised, is that this period of almost exclusively back-to-back rule by women coincides 100 percent with what we call the Golden Age of Meroë. And to me, that’s really gratifying. It reinforces that rule by women can really amplify what is good about a culture.

As queens or captains, women deftly operated ships across the Red Sea and Mediterranean 2,000 years ago.
ancient cults

A new book tells the tales of the queens of Jerusalem.
Video • AO Docs

4:00
Want to see fewer ads? Become a Member.
From Around the Web
Atlas Obscura Trips
Ancient Wonders: Egypt & The Nile
View This Trip
Thanks for sharing!