Why Are Paleontologists Getting Into Florida's Oyster Business? - Atlas Obscura
Want to see fewer ads? Become a Member. 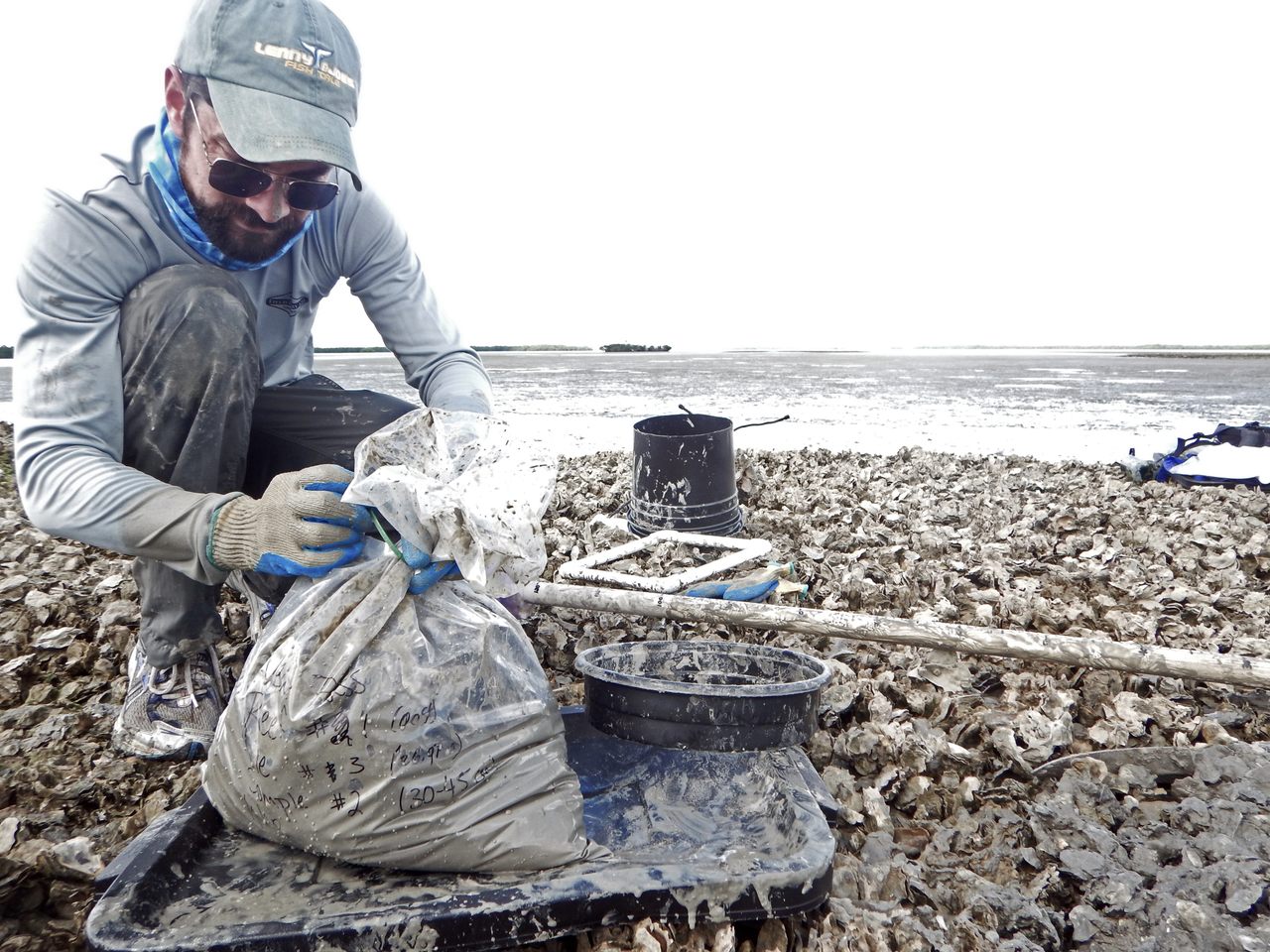 Paleontologist Stephen Durham closes up a bag of oyster samples on the Florida coast, where conservationists are preparing for the future by reconstructing the past. Courtesy Stephen Durham/Florida Department of Environmental Protection
In This Story
Destination Guide

As the tide slowly recedes out of Apalachicola Bay, a rugged swell of oysters breaks the surface. Paleontologist Greg Dietl gingerly navigates the uneven, slippery surface of exposed reefs. Dietl jokes that he’s “now in the oyster business,” but the curator of Cornell’s Paleontological Research Institution (PRI) in Ithaca, New York, has not come to harvest the living assemblage of eastern oysters (Crassostrea virginica) poking above the water. He’s here to sample the dead shells entombed below.

For the past few years, Dietl has collaborated with Florida’s Department of Environmental Protection (DEP) to collect tens of thousands of oyster fossils from reefs like this one. The work is about more than paleontology: These ancient shells are crucial to understanding the decline of modern oyster reefs throughout the Florida Panhandle, and to restoring this vital habitat.

The Florida Panhandle had long been an oyster paradise. Apalachicola Bay—which is one of the last places in the country where oystermen are still required to use wooden tongs to harvest wild oysters, rather than dredging—has been its epicenter. These salty waters once produced 90 percent of Florida’s oysters, which were slurped up by connoisseurs throughout the Southeast. Over the past century, however, overharvesting and suffocating sediment have caused many of the panhandle’s oyster reefs to vanish. The decline hastened in the 1960s with the influx of industrial waste along the coast. In 1971, the poor water quality led to an outbreak of disease that wiped out more than 90 percent of the region’s harvestable oysters. In 2020, Apalachicola Bay shuttered its once-vibrant oyster fishery for five years.

The loss of oysters sent ripples throughout the entire coastal environment. Oysters are vital ecosystem engineers and top-notch water filters—a single adult oyster can filter up to 50 gallons of water in just 24 hours. Oyster reefs even buffer coastal areas against waves and storms. Due to their economic and ecological importance, the need to restore the area’s oyster reefs was obvious. However, when restoration attempts in the region began in 2018, they hit an unforeseen snag: Thanks to poor environmental monitoring before the reefs collapsed, no one knew what successful restoration looked like. “The question I get asked all the time is, ‘what was this area like before?’” says Jonathan Brucker, manager of the Florida Panhandle’s aquatic preserves. “All I can say is, ‘I don’t know.’”

Which is why the conservationists turned to an unlikely ally: paleontologists. “It’s the only way possible to answer these questions,” Dietl says.

“By digging down into the reef, we can essentially go back in time,” Dietl explains. “We’re filling in the data they never collected.” To accomplish this, Dietl and his team used sediment cores to dig through the top layer of living shells and access the compacted underworld of the area’s once-thriving oyster community. Like sediment layers, the shells get older the deeper you dig. “The shell that was at that location in the past gets entombed in the reef framework,” says paleontologist Stephen Durham, who obtained his Ph.D. under Dietl at Cornell and now works for the DEP. “It was these historical buried shells that we were after.”

But harvesting the oysters was far from easy. At low tide, the oyster reefs are surrounded by viscous, sometimes thigh-high mud. The shells themselves are razor-sharp and covered with infection-causing bacteria. This made heavy gloves and sturdy balance essential when maneuvering around the exposed reefs.

The gray, fossilized oyster shells, rough and often stippled with barnacles, don’t look like much, but collectively they preserve decades-worth of crucial data. The researchers were particularly interested in how oyster size had shifted over the course of the fishery’s collapse. According to Durham, the size of an oyster’s shell can tell you how fast the animal grew, how long it lived, and how it responded to changes in water quality during its lifetime, among other information.

Measuring the shell sizes of past generations and creating a timeline based on that data also helped the scientists combat the phenomenon of shifting baselines—what Dietl calls “generational amnesia.” Because environmental decline occurs over time, it can alter perception of natural conditions. For example, the size of the oysters poking above the waves today may seem normal, but, once the project is complete, the researchers may find the animals are half the size of more robust ancestors.

After they are measured, the shells are deposited in PRI’s collection. Some 40,000 shells harvested from Florida’s oyster reefs have already made their way up to Ithaca, neatly arranged in drawers or swaddled in plastic and stored in buckets. Each shell preserves a crucial data point that informs the future of oysters in Florida. All of the information is added to a database that will help environmental managers determine which reefs have declined the most—and which have the potential to be saved.

Dietl’s Historical Oyster Body Size Project is just one of several projects in the burgeoning field of conservation paleobiology, where fossil data informs modern conservation efforts. Karl Flessa, a geologist at the University of Arizona who has worked with Dietl on other projects, likens the effort to “putting the dead to work.”

In his own work, Flessa uses clam fossils to chart the decline of the Colorado River Delta. When the river was dammed in the 1930s, the amount of water reaching the delta’s wetlands slowed to a trickle. This left entire islands of desiccated clam shells for Flessa to study. Recently, his work helped restore pockets of riparian habitat to the parched riverbed.

Environmental managers in Florida are already reaping the benefits from Dietl’s work. As they re-establish reefs by laying down limestone or fossilized oyster shells to provide sturdy surfaces for oyster attachment, Brucker’s team also collects living oyster samples. Back at the lab, these oysters are measured, weighed, and entered into a database, much like their fossilized kin in Ithaca. The work, while early, is promising. “We have seen more adult oysters than the last time we were out there, more than a year ago,” Brucker says.

This is especially encouraging given the dismal current state of oysters globally. Some estimate that 85 percent of oyster reef habitat around the world has been lost over the past two centuries. The eastern oysters found along the Florida Panhandle are a microcosm of this larger trend. Once found from Texas to Maine, they are functionally extinct along large swaths of the New England coast. Says Durham: “It’s an all-hands-on-deck moment in the oyster world.”

Fossils unearthed in the Bahariya Oasis tell a story of giant predators hunting on land and in the water.
science

The monstrous menace known as Whatcheeria hints that our distant ancestors may have been more like us than we thought.
science