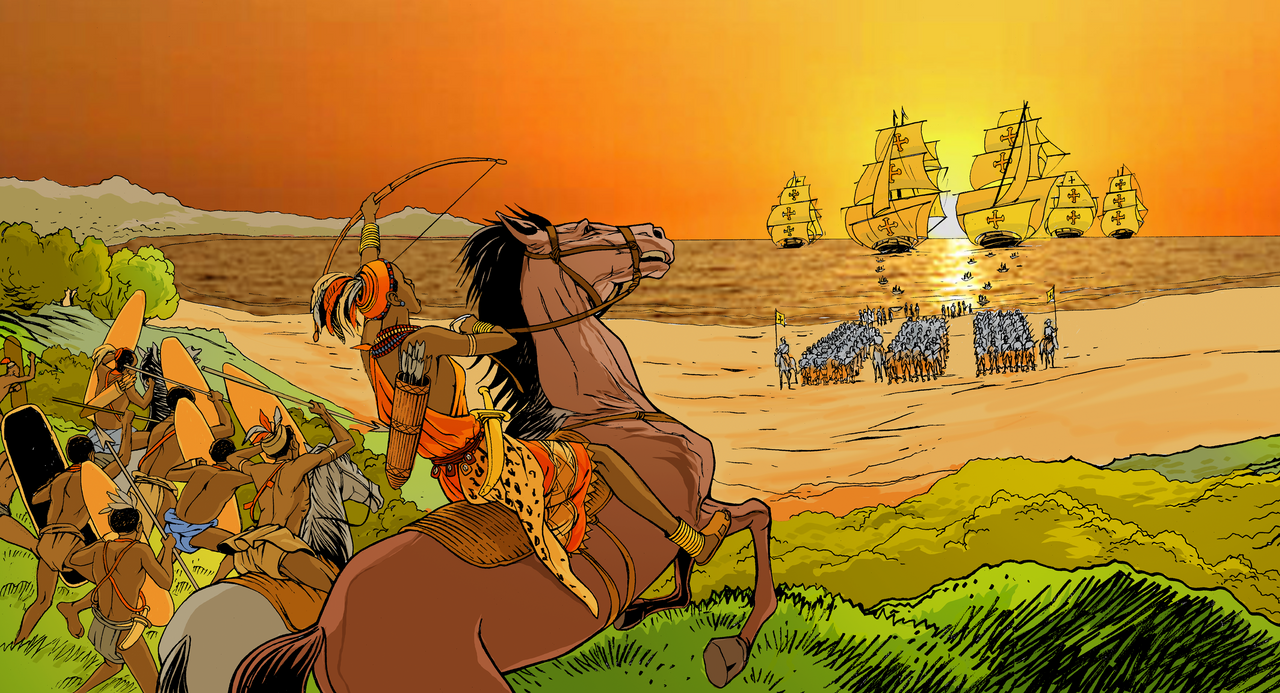 Nzinga Mbandi as illustrated by Pat Masioni for UNESCO's series on women in African history. UNESCO/CC BY 3.0
In This Story
Destination Guide

In the 16th century, Portuguese slave traders turned to the Congo and southwest Africa, after their stake in the slave trade was threatened by England and France in the northern part of the continent. Their most stubborn opposition came from an unexpected source: an Angolan queen who ruthlessly maneuvered her way into power, fought off the slavers for decades, and, rumor has it, immolated her lovers.

Nzinga of Ndongo and Matamba, also known as Nzinga Mbandi, Anna Nzinga, and Rainha Ginga, was born in 1583 to the king of Ndongo, a kingdom of the Mbundu people in modern-day Angola. The story goes that Nzinga was so named because she was born with her mother’s umbilical cord wrapped around her neck, and the Mbundu word for “to twist” is kujinga (an alternate spelling of Nzinga is “Njinga”). This circumstance was believed to indicate that the child would grow to be proud and haughty.

The king, Ngola Kiluanji, allowed Nzinga and his son, Ngola Mbandi, to witness his governance of the kingdom, which included numerous guerrilla raids against Portuguese invaders who were trying to infiltrate the territory. His children, as a result, grew up with a sharp understanding of the horrific implications of Portuguese colonization, which depended on slavery to expand its reach and riches.

According to Joseph C. Miller’s Nzinga of Matamba in a New Perspective, Nzinga first appears in the historical record in 1622, when she arrived in Luanda as the emissary for her brother, the ruler at the time. He had been dedicating all of his efforts and forces to keeping the Portuguese out of the highlands east of Luanda. During her visit, Nzinga converted to Christianity, and was baptized as Ana de Souza, a fact that would help her in her later negotiations with the Portuguese. Within two years of his sister’s visit to Luanda, Ngola Mbandi had died under unknown circumstances, and Nzinga had staked her claim as ruler of the kingdom.

Though Nzinga was about to revolutionize diplomatic relations between the Portuguese and the Mbundu state, she seized her title with great opposition from the internal political factions in the kingdom. The 17th-century Mbundu kingdom was made up of a hierarchy of linked political titleholders each with their own followings. After Ngola Mbandi’s death, the king’s title would normally have gone to the leader with a combination of the most number of followers and the most deft political maneuvering.

“The scant evidence available on Nzinga’s place in this general structure indicates that her claim to the royal title of the ngola a kiluanje violated established Mbundu norms,” writes Miller. “The Mbundu harbored strong feelings against females assuming any political title and explicitly prohibited any woman from assuming the position of the ngola a kiluanje.”

Initially, the Portuguese did not recognize Nzinga as the rightful ruler of the Mbundu people, either; they suspected that she was somehow implicated in her brother’s death and refused to honor her right to succeed him. They instead assumed that the heir apparent to the Mbundu throne was Ngola Mbandi’s son.

As a result, Nzinga was forced to turn to support from outside the state: from a band of Imbangala warriors who inhabited the borders of the Mbundu kingdom and had expressed hostility against both Mbundu and Portuguese armies in the past. She also offered asylum to slaves escaping from Portuguese territories, eventually recruiting them as manpower.

The Imbangala in particular were crucial to increasing Nzinga’s position in domestic politics. Not only were they notorious for their fierce ways and highly effective war strategies, they did not have the same hierarchical structure as the Mbundu and frequently recognized women under the title of tembanza: a leader in both war and politics. Nzinga manipulated the Imbangala’s readiness to accept a kinless woman as their leader by assuming the tembanza position in a group of Imbangala led by the kaza, one of the most powerful warlords in the region.

The Mbundu recognized Nzinga’s situation with the kaza as a marriage of sorts, and so did the Portuguese. According to Miller, Nzinga then used the kaza to help her kill her brother’s son, the heir apparent, in an effort to secure her position as the leader of the Mbundu. However, eventually the Imbangala left Nzinga and defected to the Portuguese due to her lack of Imbangala ancestry. By 1629, Nzinga was left without allies and with the Portuguese army in hot pursuit.

She fled to the old Mbundu kingdom of Matamba, a safeground that had in recent years been ravaged by Portuguese and Imbangala raids. In the 16th century, Matamba had flourished under the rule of several queens, although they had long since ceded rule to Nzinga’s father, Ngola Kiluanji, and later her brother. The disarray after his death and various raids had created a political vacuum which Nzinga was quick to fill, using their willingness to accept female rulers to buttress her position as leader of the Mbundu.

Nzinga increased her wealth, her armies, and her power by blocking Portuguese access to slave trade routes and diverting the slaves into Matamba. She continued to resist Portuguese troops well into her 60s, and it is said that she would wear male dress and lead her armies into battle herself.

Legends of Nzinga extend outside of her brilliant military tactics and political strategy. In Philosophy in the Boudoir, the Marquis de Sade wrote that Nzinga “immolated her lovers,” obtaining a large, all-male harem after she became queen and having each man she slept with killed after their carnal encounter. Though there is no way of knowing if there is truth to these rumors, there is no denying Nzinga was a ruthless ruler, unafraid of sacrificing men who came in her way.

In 1657, at the age of 74, Nzinga entered peace treaty talks with the Portuguese, after having fought and been worn down by colonial and slave-raiding attacks for decades. After conceding much of her power, Nzinga devoted her efforts to rebuilding her war-torn nation. Following her death in 1663, the Portuguese lost their most valiant opposition and were able to accelerate their colonial occupation.

As Donald Burness points out in “Nzinga Mbandi” and Angolan Independence, up until the 20th century, not much had been written by African writers on historical African revolutionaries. But during Angola’s fight for independence from the Portuguese in the 1970s, an MPLA leader named Manual Pacavira wrote a novel about Nzinga called Nzinga Mbandi while imprisoned by the Portuguese, drawing many parallels between her fight and the ongoing civil war.

“The spirit of Rainha Ginga is not dead; it serves as a source of inspiration and pride to a people and its leaders who face new challenges and new opportunities,” writes Burness. Angola is now independent, and a statue dedicated to Nzinga in Luanda serves as a tribute to one of the first people to have fought for its freedom.

From California’s mythic warrior queen to the swole women of Sparta to female hunters in ancient Peru.
war history

She trained a regiment of women and led armies—with a baby in tow.
military history