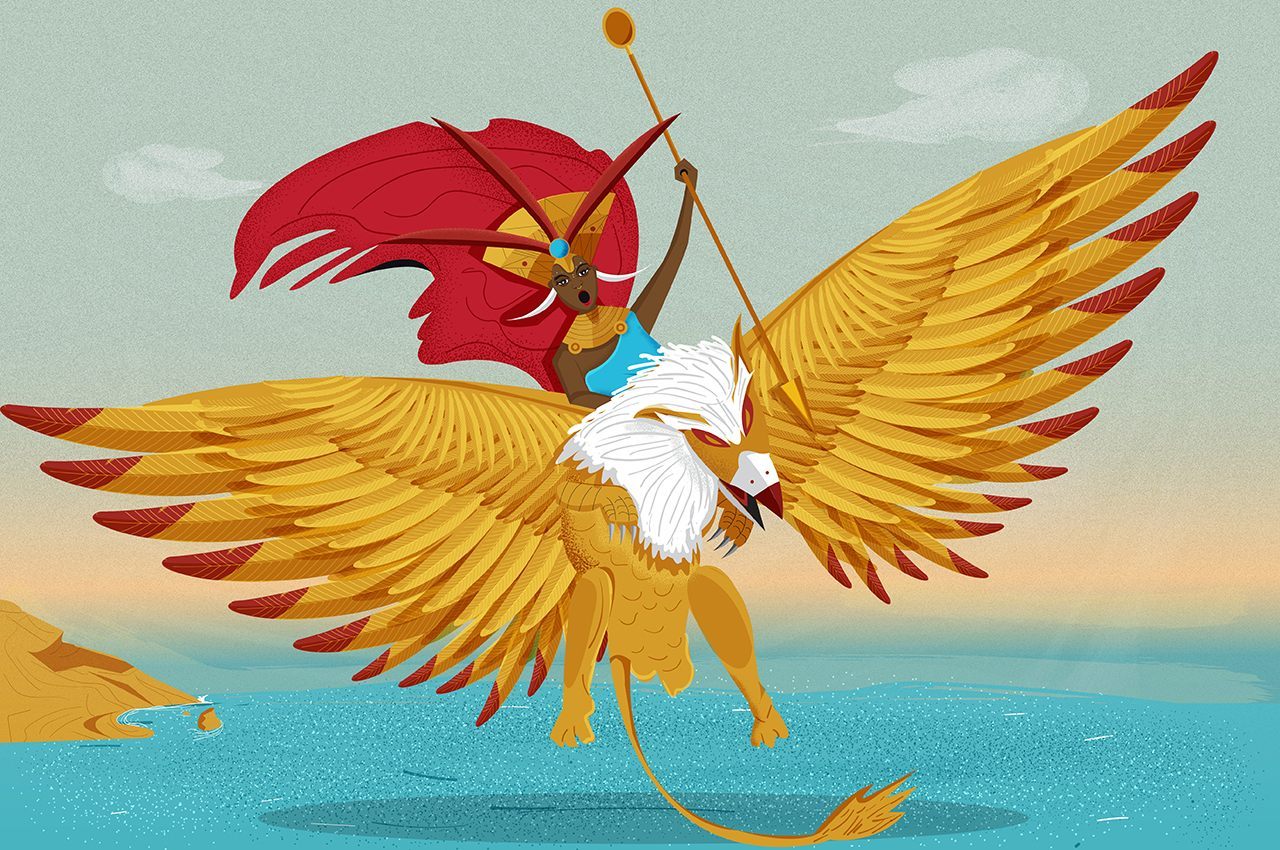 The Black griffin-riding Queen Calafia is the fierce namesake of California. CHERYL THUESDAY FOR ATLAS OBSCURA

In California, a Black warrior queen rides a griffin at the head of an all-female army. In Sparta, girls get ready to race one another around a dirt track lined with columns. In ancient Peru, a huntress takes a shot at a galloping deer. Throughout human history, women have fought. They’ve led armies. They’ve taken down big game. They’ve trained to cut down prey on the hunt and enemies on the battlefield. Both archaeology and history are telling increasingly complex stories around gender roles, upending decades-old beliefs that men hunted and fought while women stayed home. Many past societies were structured around individual strengths. If you were a strong fighter in the Viking world, you fought. It didn’t matter if you happened to be a woman. As we continue to celebrate Women’s History Month, Atlas Obscura went digging in our archive to uncover some of our favorite female warriors.

The subject of a popular medieval romance, Queen Calafia, namesake of the state, rode griffins and led a Black female army.

Few people today know that a legendary Black queen gave California its name. The fictional Queen Calafia first pops up in Garci Rodríguez de Montalvo’s Las Sergas de Esplandían, an epic medieval romance that centers around an Amazon-like leader who is eventually tempered by patriarchial European society. As the Spanish conquistadors were carving a devastating path through 16th-century Latin and Central America, they were also obsessing over stories of chivalry, knights, and, yes, Black, griffin-riding queens. So when Hernán Cortés arrived in the Golden State in 1530, he decided to christen the land “California.” But Queen Calafia’s story did more than inspire the naming of a state, it also reveals the complicated way medieval people understood race.

In Sparta, Women Also Got Swole

These ancient women worked out, drank wine, and enjoyed their poetry.

Welcome to ancient Sparta, where drinking and working out isn’t just for boys. Women in the ancient Greek city-state exercised rights and privileges—and straight-up exercised—more than their peers in Athens and elsewhere. From a young age, girls grunted their way through physical training, drank wine (something women beyond Sparta didn’t do), and participated in foot races. While boys were marching through military drills, girls also learned mousike, the arts of the muses—playing music, reciting poetry, and popping some badass dance moves.

The Women Who Hunted Big Game in Ancient Peru

Of 27 prehistoric burials with hunting artifacts, 11 are women—flying in the face of traditional academic bias that only men were hunters.

“​​The past can serve to legitimize the present,” warns Marin Pilloud, an anthropologist from the University of Nevada, Reno. For decades, anthropologists and archaeologists assumed that only men hunted in hunter-gatherer societies, while women gathered berries and had babies. It was a convenient assumption that reinforced modern gender norms. But when scientists look harder, they find a material record that often tells a different story. Men weren’t the only ones hunting in ancient Peru, for example. Women were taking down big game with the best of them.

Lakshmibai trained a regiment of women and led armies—all with a baby in tow.

One of the fiercest opponents the British faced in India was a warrior queen they never saw coming. Lakshmibai grew up learning martial arts, sword-fighting, and riding alongside the boys at court. When she married the king of a small territory in northeast India, she exercised and practiced her sword skills with palace weapons. She even trained and drilled a regiment of women to serve as her personal guard. But after the death of her husband, the British started moving in on her kingdom. She was having none of it. Because of her wiles and bravery, even her enemies declared that she was “the most dangerous of all the rebel leaders.”

The African Warrior Queen Who Fought For Freedom

Nzinga Mbandi grew up watching her father deftly use guerrilla warfare and raids against Portuguese invaders. But when her brother inherited the throne, things went downhill. He failed, again and again, to drive out the colonizers. Then he died. Tired of looking on while her world fell apart, Nzinga took up the throne herself. After solidifying her hold on power, she got to work. For the next 33 years, Queen Nzinga fought the Portuguese, led armies, and succeeded in expelling them from her kingdom.

The True Story of the Valkyries

For centuries, valkyries were assumed to be nothing more than legend—until a Viking burial of a female warrior in Sweden changed everything.

She was buried with every weapon known to the Vikings—swords, spears, bows, a long knife known as a scramasax. Two horses were sacrificed alongside her. For more than a century, her grave was considered the preeminent male Viking warrior grave. That is, until DNA evidence proved she was no man. In this Q&A with author Nancy Marie Brown, part of Atlas Obscura’s “She Was There” series, Brown discusses what life might’ve looked like for the Viking buried in Birka, Sweden. Brown delves into why she and other real Viking warrior women have been shrugged off as mere myth.

From Italy’s fortress-seizing countess to Angola’s battle-hardened Queen Njinga, these women didn’t back down from a fight.
kickass women

From wielding lethal bows to commanding troops, the female soldiers of the Central Asian steppe were formidable foes.
war history

She trained a regiment of women and led armies—with a baby in tow.
Video

1:15
Want to see fewer ads? Become a Member.
From Around the Web
Atlas Obscura Trips
Rewilding: Tracking Wolves in the Forests of Sweden
View This Trip
Thanks for sharing!