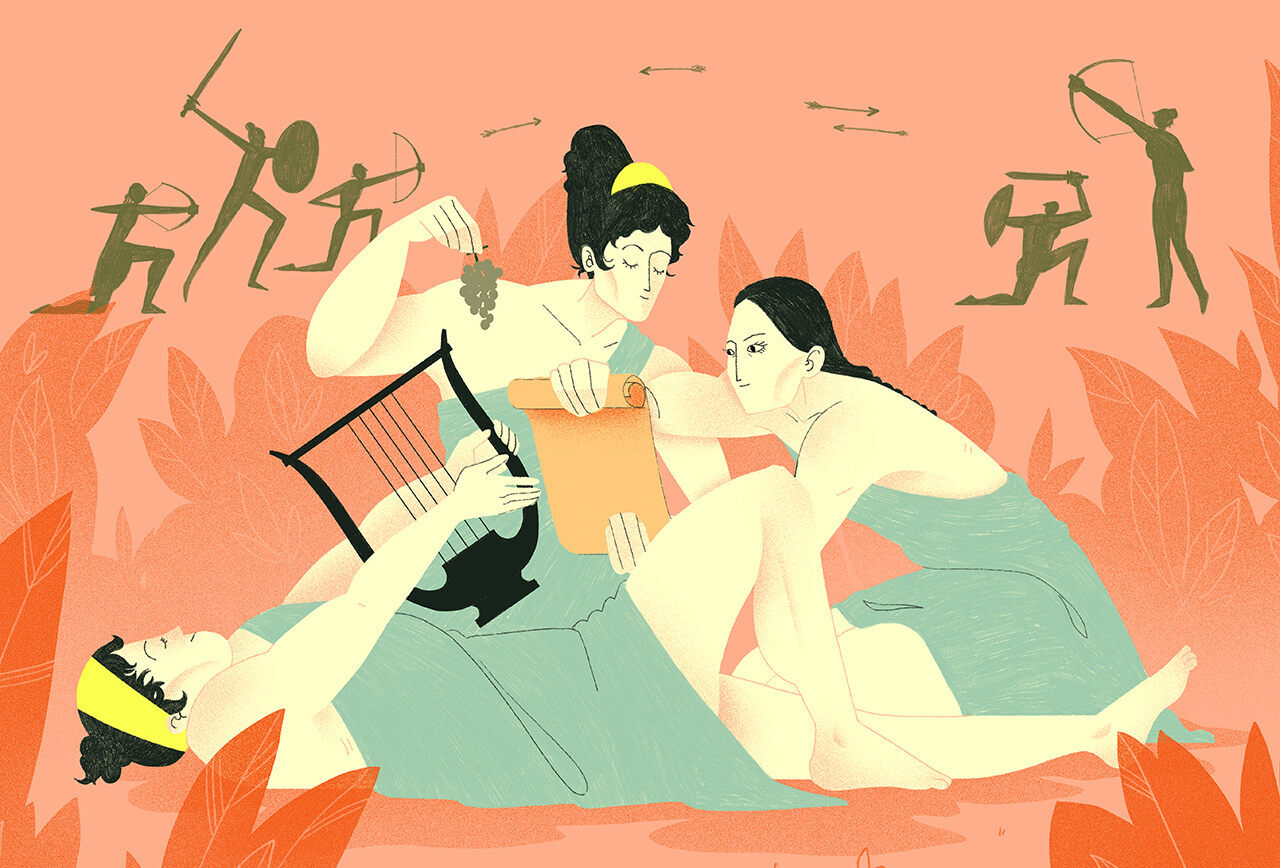 This week, we’re remembering historic leisure activities—ways that people kicked back, chilled out, and expressed themselves throughout the centuries. Previously: Did ancient hominins paint for fun?

The maidens of Sparta spent long hours under the bright sun. They pumped their legs and swung their arms, they sprinted and grappled, they lifted their voices in choruses. One song likened a beautiful woman to a horse with strong haunches and clamorous hooves.

At least, that’s what scholars suspect. Piecing together what we know of the women of Sparta, the famously ferocious Greek city-state that flourished from the seventh to the fourth centuries BC, is a bit like reassembling the jumbled fragments of a mosaic. The ancient world exists only in pieces, literal and figurative—and that’s especially true for Sparta.

Classicists point out that Sparta’s oral traditions were less robust than, say, Athenian traditions, and the city-state hasn’t yielded as many archaeological clues. Spartan households were, after all, fairly spartan. (Elsewhere, scholars glean hints from female figures on funeral reliefs or locally minted currency; for a long time, Sparta had neither.) “Almost all of our major sources on Spartan women are the work of authors who were not Spartans, and who lived much later than the times they discuss,” writes Sarah B. Pomeroy, an emeritus professor of classics at the Graduate Center of the City University of New York, in her book Spartan Women. Many of those chroniclers were men, who chose to train their focus on other men. “Remarks about women usually constitute a small fraction of a text devoted to another subject.”

But Pomeroy and other scholars have now tried to flesh out what, exactly, Spartan women got up to. Despite the relatively sparse historical record, they have contemplated everything everything from sexuality to political participation and religion. Their accounts offer some hints about what relatively elite Spartan women might have done for kicks.

As girls, they grappled and grunted their way through physical training. They weren’t preparing for combat, but they still got swole. In Sparta, “physical fitness was considered to be as important for females as it was for males, and girls took part in races and trials of strength,” notes the historian Sue Blundell in her book, Women in Ancient Greece. Plutarch describes workouts (and public spectacles) in which girls ran, wrestled, and flung javelins.

Spartan girls were educated in mousike, or the arts of the muses, too—and while their brothers’ worlds revolved around military drills, the girls probably also fine-tuned their skills in music, reciting poetry, and dancing. Girls recited choral lyric poems written by Alcman, including one that mentions the “silver” face of a woman; Pomeroy interprets this to mean that she was glistening with sweat. Grown-up Spartan ladies were reportedly famous for a dance called the bibasis, whose cheeky and challenging choreography, Pomeroy writes, required a dancer to leap into the air and “thump her buttocks with her heels.”

As they grew, women lived a sporting life, sometimes hunting, running in competitions, or racing horses. They were probably the only Greek women to glug wine, Pomeory writes. Spartan women tended to marry at 18 or so—an age Pomeory describes as “substantially later” than the marriage age elsewhere in Greece—and though many privileged women owned property, they weren’t typically encumbered by it.

That’s not to say that Spartan society was equal. One of the reasons that Spartan women could savor so many freedoms was that their culture subjugated others that their army had conquered—and women often offloaded domestic tasks to people such as helots, a group that the second-century Greek scholar Julius Pollux described as having a status “between free men and slaves.”

The primary task of Spartan women—to conceive and raise strong sons, or daughters who would do so—“did not require the full-time practice and scrutiny that was imposed upon the boys,” Pomeroy writes. “Thus, it would appear that they enjoyed some privacy and leisure.” Compared to other ladies of Ancient Greece, the womenfolk of Sparta “had plenty of time to do whatever they wanted to do.”

Still, many of the activities that occupied Spartan women’s time—working out, busting a move, throwing back a couple of drinks—weren’t just recreational. Poetry and music, for instance, were likely part of initiation rituals that signaled community values, such as marriage and motherhood. Ellen Millender, a classicist at Reed College, says as much in a chapter about Spartan women in the two-volume A Companion to Sparta. “This training instilled in Spartan girls the polis’ system of values through the medium of the poet’s verses, and thus prepared them to adapt to those gender roles, behaviors, and responsibilities that sustained Sparta’s body politic,” Millender writes.

Ancient writers also highlighted the way that strong individual bodies helped a culture flex its muscle: strong women begat strong children, they argued. Millender suspects that the emphasis on “cultivation of vigorous mothers of Spartiate warriors” was partly responsible for the prime place of athletics in Spartan life.

Thankfully, modern-day women don’t need to partake in an initiation ritual to enjoy a truly old-fashioned foot race, or a healthy pour of wine. This summer, go ahead and take a cue from a glistening Spartan lady. Whether you want to raise young warriors is up to you.

The Dinner Party That Served Up 50,000-Year-Old Bison Stew

To chill like a marauding Norseman, drop your sword and take up these ancient winter sports.
art

This summer, chill like an ancient hominin and make some art.
temples

Geological features, toxic fumes, and visions of the future.
sports

The modern pentathlon has a brutal history.
Video • Wonder From Home

3,000 years before the Aztecs, Mesoamericans were already playing ball.
Read more
Thanks for sharing!