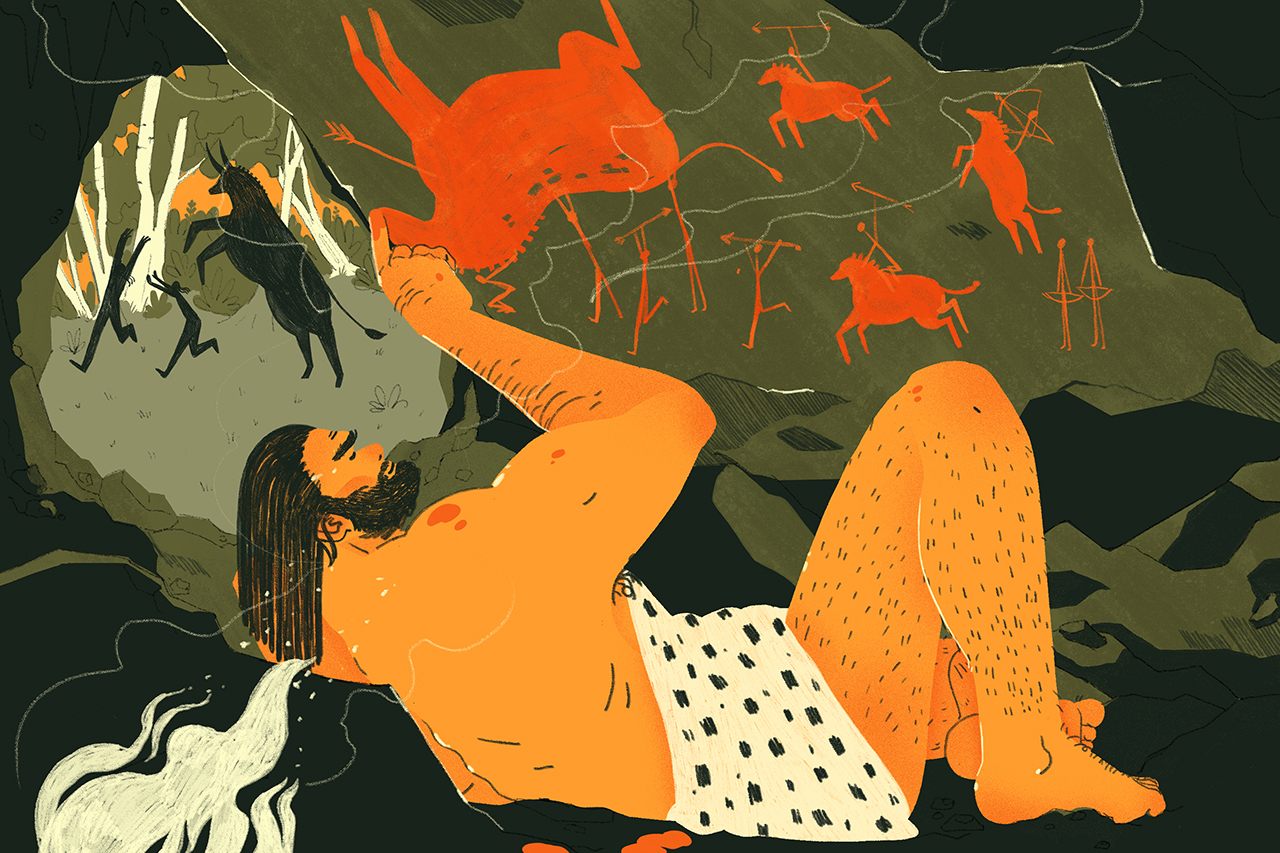 Mighty scary world out there. Why not do some doodles? Chelsea Beck

This week, we’re remembering historic leisure activities—ways that people kicked back, chilled out, and expressed themselves throughout the centuries.

Life in the Stone Age wasn’t easy. Tens of thousands of years ago, during the most recent ice age, Neanderthals and humans shared a world chock full of dangers: lions, sabertooth tigers, mammoth hunts gone awry. But despite these threats, our ancestors found time to express themselves. In the secluded recesses of caves, communities would spend time working on the walls and ceilings, creating artworks—many depicting the deadly beasts they dealt with—that had no obvious practical purpose.

With modern humans currently spending their summer days strolling in the park or chilling at the beach, we got to wondering: were these early artworks a form of leisure? Were they a way of passing the time, of unwinding after a hard day’s hunt? Could they be the Stone Age equivalent of, say, kicking back and watching Netflix?

For early humans, survival was more than a full-time job, says Steven Kuhn, a paleontologist at the University of Arizona. It’s not like you got to take vacation. “If your life is just…keeping alive, it’s not like you say, ‘Okay, it’s 6:30, I’m going home,’” he says.

All the same, there was plenty of down time. Nightfall brought on new threats, and made foraging and hunting more difficult and more dangerous. To survive, ancient communities would withdraw into cave systems at night, where they were less exposed. “For most of the world, for most of history, when the sun went down you couldn’t really do much,” Kuhn says.

Different kinds of hominins seem to have spent those empty hours in intriguingly similar ways. Scientists used to think that early humans were the sole artists of their time, but research last year suggested that Neanderthals, too, did arts and crafts in cave systems. Though not as widespread or elaborate as human art, Neanderthals appear to have painted figures, handprints, and dots on walls, and may have even done some body painting.

Some art by early homo sapiens was remarkably complex: in the karst deposits of modern-day Spain and France, our hominin ancestors painted abstractions, geometries, animals, and handprints, the purposes of which are still hotly debated. Some say the depictions of animals were to commemorate past hunts, or to ensure successful hunts in the future. Some scholars have noted similarities between the geometric patterns and the patterns that materialize on hallucinogenic trips.

Whatever their function, Kuhn says that they took time. “It wasn’t like somebody was watercolor painting,” he says. “They were hard to do, and deeply meaningful and significant.” When asked whether he considers cave painting a form of leisure, Kuhn makes an analogy. In our own time, he points out, some hardworking artists are always busy creating. For them, art isn’t calming. It’s a calling. “An artist doesn’t consider making art a leisure activity,” he says.

Scores of ancient paintings and other works will soon succumb to the sea—but a passionate team is determined to preserve this 'bubble of memory.'
science

Prehistoric people may have created 'proto-cinema,' with galloping bison and tail-swishing horses.
vikings

To chill like a marauding Norseman, drop your sword and take up these ancient winter sports.
Video