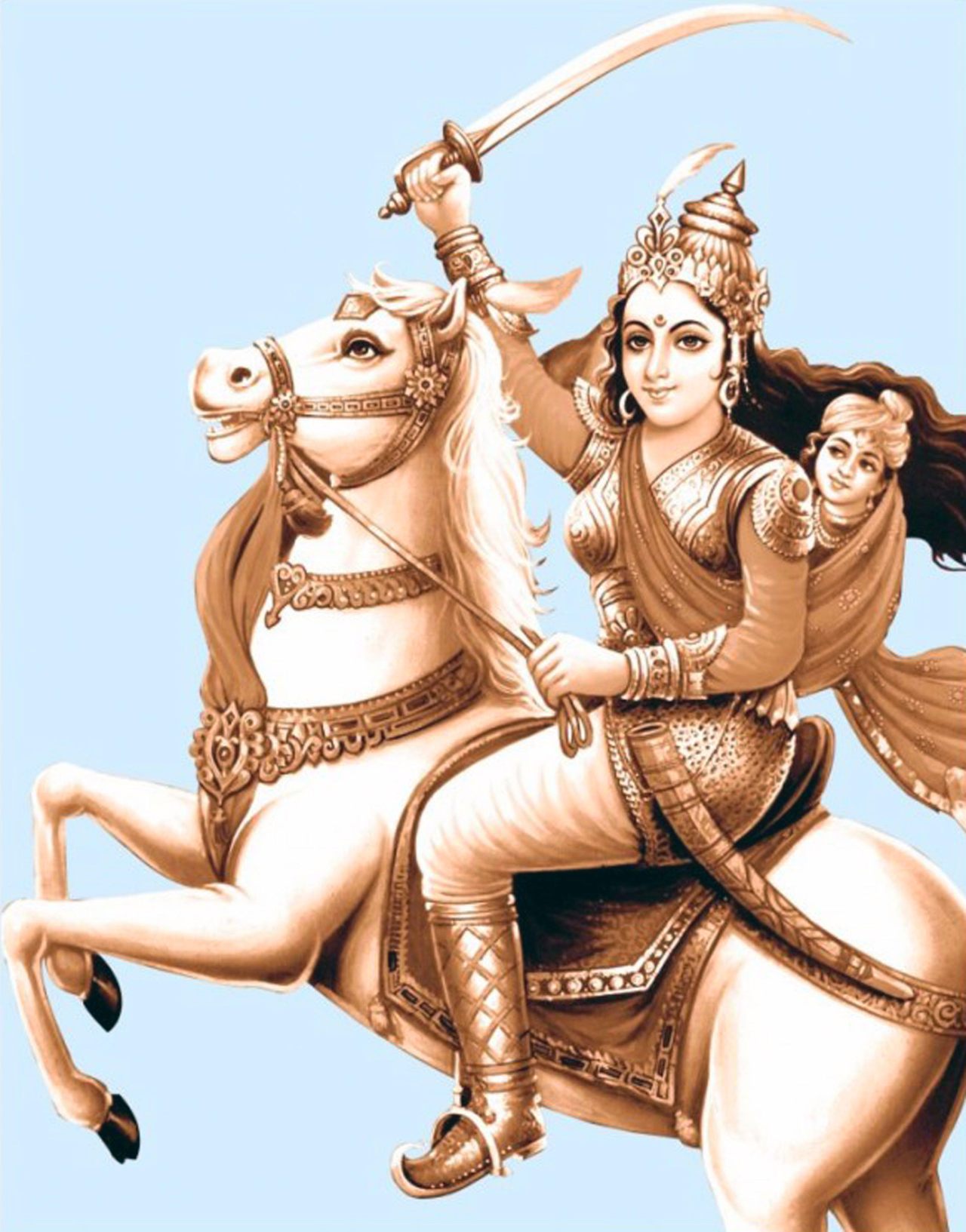 In addition to fighting off the British, Lakshmibai also drilled and trained a regiment of women. CPA Media Pte Ltd/Alamy Stock Photo
In This Story
Destination Guide

In the early uprisings against the British Raj in India, a new kind of freedom fighter emerged: a rebel warrior queen who led her troops into pitched battles for independence. The rani of Jhansi was one of the leading figures in the Indian Rebellion of 1857 and a symbol of resistance against the British. What’s more, she was a total badass.

The rani, or Hindu queen, was born in the holy town of Varanasi sometime around 1828, and was given the name Manikarnika–“mistress of jewels.” From an early age, she is said to have had several tomboyish tendencies. Her mother died when she was only a toddler. As a result, Manikarnika was brought up in the court of a chief minister, the Peshwa, where her father was an advisor. She was educated alongside the boys in the Peshwa’s court, and so learned skills unusual for a young girl at the time: martial arts, sword-fighting, and horse-riding.

When she was a teenager, Manikarnika was married to Gangadhar Rao, who was the maharaja (king) of Jhansi, a small territory in northeast India. Upon her marriage, as was customary for Indian queens at the time, Manikarnika took a new name: Lakshmibai. The maharaja was 20 years her senior, and she was his second wife. She was far more active than he, and had a keen interest in horses. The rani exercised and practiced with the palace’s weapons, and even drilled and trained a regiment of women.

“This may not have been quite so unusual as it appears,” writes Allen Copsey, who has extensively researched the rani’s life. The women’s quarters of a palace were often guarded by armed women, and these women warriors would occasionally take part in battles. “What was unusual was for the rani to be in charge of their training.”

In 1853, just 11 years after his marriage to Lakshmibai, the maharaja died. On the day before his death, the childless king adopted a son in order to make him heir to the throne, since his wife, as a woman, was not entitled to that right. Up until then, the princely state of Jhansi had been independent of British India, but had maintained a pro-British stance.

After the maharaja’s death, the British seized the territory and refused to recognize the rani or her adopted son as rulers of the territory, despite the queen’s repeated appeals.

The following year, the rani was ordered to leave the palace and the fort of Jhansi. Lakshmibai took up residence in a palace called Rani Mahal. She had refused to confine herself to the usual fate of a childless Hindu widow, and had forgone most of the traditions associated with widowhood, such as shaving her head and breaking her bangles. John Lang, a British counsel, visited her at Rani Mahal to listen to her appeal. According to Lang’s memoir, the rani, who was around 26 years old at the time, emphatically exclaimed, “Mera Jhansi nahin dengee!”–Hindi for “I will not give up my Jhansi!”

It was not as though the members of the East India Company thought she was incapable of rule. One political agent at the time wrote that the maharaja’s widow, “in whose hands he has expressed a wish that the government should be placed during her lifetime, is a woman highly respected and esteemed, and I believe fully capable of doing justice to such a charge,” Antonia Fraser reports in the book, Warrior Queens.

Tales of the rani’s formidable strength and resolve abound; Fraser writes of an account which describes the Rani on horseback, “with the reins in her teeth and two swords in her hand.” Despite her abilities, the rani was reluctant to rebel against the British–until 1857.

Mutiny broke out across northern India in 1857, beginning in Meerut and traveling to Jhansi. The Jhansi Fort was besieged by mutineers, who entered and slaughtered every British man, woman and child within. Though the rani’s involvement with the mutiny is still debated, she was associated with the massacre from the very beginning. A British army doctor, Thomas Lowe, described her as “the Jezebel of India … the young, energetic, proud, unbending, uncompromising Ranee, and upon her head rested the blood of the slain, and a punishment as awful awaited her.”

Following the rebellion, Lakshmibai returned to Jhansi under the intention of holding the fort for the British, and defended it against attackers. The British, however, ignored her pleas for help in defending the territory. To them, Jhansi had become a rebel encampment, and Lakshmibai its warrior queen.

The next year, Sir Hugh Rose, a commander in the British army, was tasked with cleaning up the remaining rebel encampments in India following the mutiny. He set off for Jhansi, and as a result, Lakshmibai set aside her peaceful mien and began preparing for war. According to Fraser, she secured 14,000 volunteers from a population of 220,000, as well as 15,000 Indian soldiers who had been serving under the British (sepoys). She also set up a foundry to cast cannons over the walls of the fort.

In March of 1858, Rose’s troops descended on Jhansi, and the warrior queen led her troops into battle. Eventually, Jhansi’s resistance faltered, and the queen escaped into the night with her adopted son, decamping in a nearby town. The British attacked the town in May, and the Indian troops led by the rani were defeated. She fled again, this time to Gwalior, with the intention of taking the strategically positioned Gwalior Fort alongside other rebel leaders.

In June of that year, the wrath of the British arrived in Gwalior, and it was here that the rani of Jhansi was finally defeated. The other rebel leaders had not listened to her suggestion to prepare for an attack on Gwalior, and the fort fell on June 16, 1858. The rani was commanding a large Indian force the next day when she was killed in battle. The rebel troops were demoralized and left Gwalior; it was undeniable to all that the death of the rani marked the end of the Indian rebellion.

Sir Hugh Rose wrote to the Duke of Cambridge after Lakshmibai’s death, and described her as “remarkable in her bravery, cleverness and perseverance … the most dangerous of all the rebel leaders,” and called her “a sort of Indian Joan of Arc.” Colonel Mason wrote in his History of the Indian Mutiny that “whatever her faults in British eyes may have been, her countrymen will ever remember that she was driven by ill-treatment into rebellion, and that she lived and died for her country.”

From wielding lethal bows to commanding troops, the female soldiers of the Central Asian steppe were formidable foes.
vikings

From California’s mythic warrior queen to the swole women of Sparta to female hunters in ancient Peru.
kickass women

2:40
Want to see fewer ads? Become a Member.
From Around the Web
Atlas Obscura Trips
Delhi and Rajasthan: Colors of India
View This Trip
Thanks for sharing!