Did Khutulun and Other Warrior Women Actually Fight in the Mongol Army? - Atlas Obscura
Want to see fewer ads? Become a Member. 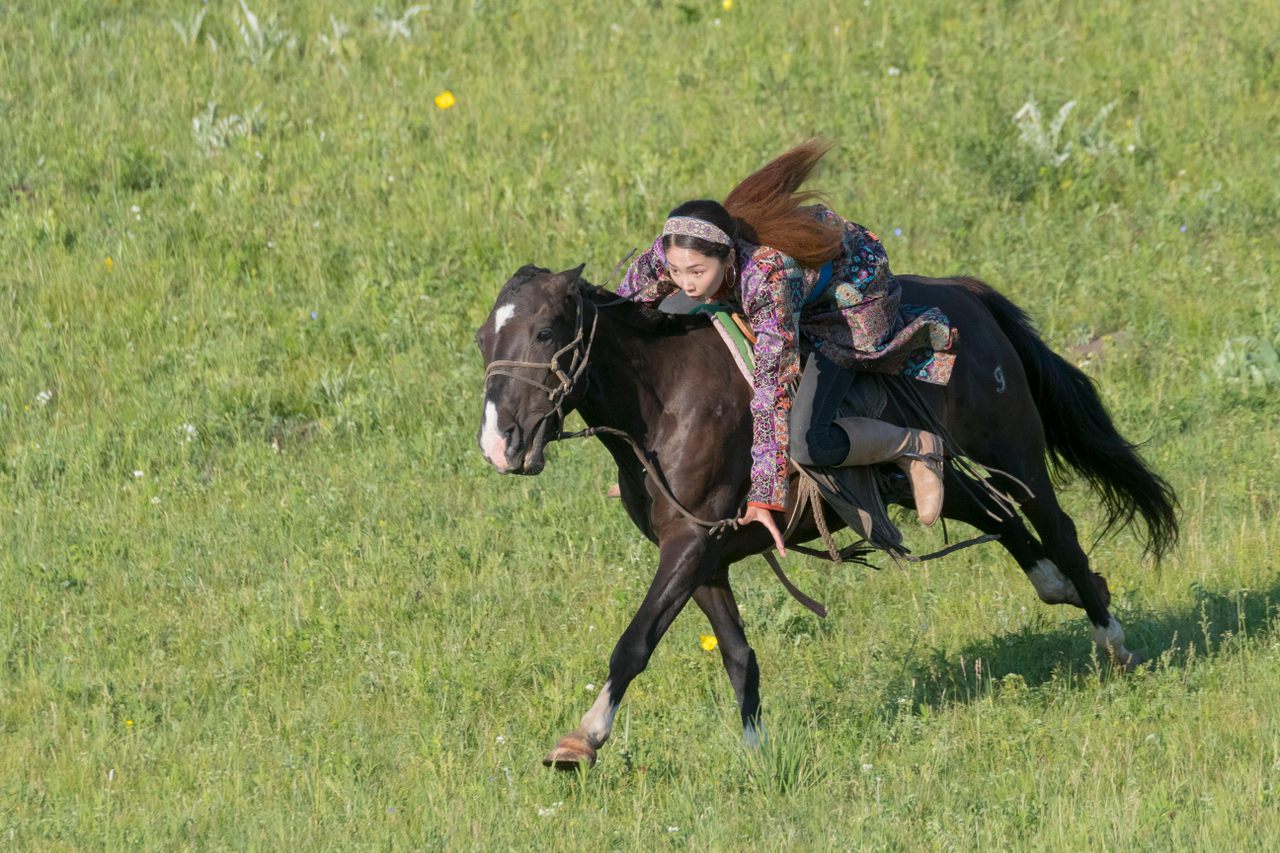 A chilly night settles across the grassy knolls of the Mongolian steppe. Then, all at once, the thunder of galloping horses pierces the quiet. Screams erupt as the cavalry charges Kublai Khan’s unsuspecting forces. Khutulun’s horse rears, desperate to join the fray. But Khutulun holds the mare back—not yet. Even before Khutulun was born in 1260, her father, Kaidu, hated Kublai Khan. In their eyes, Kublai was a traitor shunning Mongolian traditions while adopting Chinese ones. But, if this raid goes according to plan, Khutulun and her father could deal a crucial blow. “Now, Khutulun!” Kaidu bellows. Kicking her horse into action, Khutulun flies at the enemy. Deftly as a hawk, she narrows in on her prey, the camp’s commander. She looses a bone-tipped arrow and it sails through the commander’s shoulder. Khutulun hoists his bleeding body onto her saddle and races back to her father’s side. Unceremoniously, she drops the enemy at Kaidu’s feet. “And this she did many a time,” wrote the globe-trotting Marco Polo, who spun Khutulun’s feats far and wide.

The great-great-granddaughter of Chinggis (aka Genghis) Khan, Khutulun, by all accounts, was a badass. Living in the late 13th century, she was her father Kaidu’s best warrior. A starry-eyed Polo wrote she was “so strong and brave that in all her father’s realm there was no man who could outdo her in feats of strength.” Persian chronicler Rashid al-Din agreed, writing that she “frequently [took] part in campaigns and perform[ed] acts of heroism.” But she wasn’t the only female warrior of the Eurasian steppe. Mongol women warriors “exist, but they’re not commonplace,” says Mongol military historian Timothy May of the University of North Georgia. But just how commonplace they were depends on who you ask. While some scholars believe women warriors were right there conquering the world alongside Chinggis, others doubt whether contemporary references to Mongol warrior women are little more than literary embellishments.

Despite conflicting opinions, most scholars agree that to be a Mongol, you needed to know two things: how to ride and how to shoot. As May puts it, “without your horse, you were dead.” And in Mongolia, you started learning young. Toddlers learned how to ride almost before they could walk. By seven years old, children were shooting arrows from the backs of horses, racing as jockeys, and, if necessary, riding into battle. “You’re looking at a seven-year-old soldier. It doesn’t matter what gender that child is,” says Columbia University PhD candidate Sally Greenland.

Under Chinggis Khan, the Mongols forged the largest contiguous land empire ever known. According to some estimates, it stretched a mind-boggling twelve million square miles across Asia, from modern-day Poland to South Korea. The Mongols’ success had everything to do with their riding and archery skills. As one Chinese chronicler put it, “they took possession of the world through this advantage of bow and horse.” It’s also the reason why female warriors could be just as deadly as their male counterparts, says May.

On a horse, women are just as fast as men; and armed with a bow, they could be just as deadly. Made from sinew and horn, the Mongol bow was the sniper rifle of medieval Asia. A warrior wielding this bow could easily skewer an enemy more than 350 yards away—outshooting the contemporary English longbow by 100 yards. Yes, you had to be strong to use the Mongol bow. But, with this bow, skill trumped might every time. When the Mongols rained down a black cloud of arrows on their enemy, it didn’t matter whether a man or woman released the killing shot.

In the early days of the Eurasian steppe, knowing how to use a bow and ride a horse could be the difference between survival or death. Wolves, enemy tribes, and other dangers lurked everywhere. “You’re pretty much out on the steppe by yourself [so] the men had to learn how to do the women’s jobs and the women had to learn how to do the men’s job,” says May. While men traditionally protected the camp and women cared for the tribe’s herds, everyone had to be ready to pick up the slack, especially if an enemy tribe decided to raid your own. “If you’re living in a group of 20 people and another 20 people ride over the hill and they want what you have, whether that be water or sheep or you name it, anything, it would be silly to have ten of [your] people just sitting on the ground,” says Greenland.

In medieval Mongolia, nearly every activity, from races to wrestling matches, doubled as military training—perhaps the most important being the communal hunt or nerge. “Women were hugely involved in setting up the hunts,” says Greenland. Everyone, young and old, male and female, participated. As the sun rose across the hilly grasslands of the steppe, hunters rode off in search of game. When they found an unfortunate deer or boar, the group would encircle the animal, tightening and tightening their formation until someone dealt the panicked animal a killing blow.

Mongol soldiers used the same tactic in battle, encircling enemies with lethal efficiency. The hunt taught warriors how to remain calm in the face of a desperate enemy, and was a chance for everyone, men and women, to prove their mettle, says Greenland. In the nerge, “women had a chance to be heroes, and in being heroes, women were then very able to be perceived as warriors.”

Before the late 12th century, tribes scattered across the steppe often fought each other, so every warrior mattered. If an enemy tribe decided to raid your camp, everyone, men and women, took up their bows and battle axes to defend their home. But later on, as Chinggis Khan united the steppe and embarked on his campaign of world domination, his army grew and individual roles became more specialized. By and large, men became soldiers while women ran Chinggis Khan’s growing empire. Women warriors still fought at times, but they essentially became a reserve force. “When the battle is being hard-pressed against the Mongols, they bring in additional troops that tend to be women,” says May. But overall you see fewer female warriors in these latter days of the empire, says Greenland.

As Chinggis’s army grew, it also became increasingly “composite,” says Greenland. He bolstered his forces with captured enemies, forcing them to do the most dangerous jobs of war like carrying battering rams to the city gates. He adopted other cultures’ military tactics, such as recruiting Chinese engineers to build trebuchets. But unlike the Mongols, these other cultures didn’t allow women to fight. “The cultures that the Mongols invaded around them, that then they subsumed within their own war machine, those cultures were male-dominated and that I think is why we see less frontline women [warriors],” says Greenland. But this didn’t stop all women from taking up arms and riding into the fray of a battle.

Sometimes women would inherit troops and military titles from dead husbands and fathers. These instances, though, are rare, says Bettine Birge, a scholar of Chinese history from the University of Southern California. “From my perspective, you see women exerting a lot of political power but not necessarily themselves being warriors individually except for these isolated cases.” However, even in the centuries following Chinggis Khan, a handful of women commanded and fought alongside their troops. In the early 13th century, Alaqa Beki, Chinggis Khan’s daughter, inherited troops from her father and had “several thousand women serving her. Whenever they go campaigning, they behead and kill,” the Chinese chronicler Zhao Hong wrote. In the 1280s, as Khutulun is busy leading armies in eastern Asia, Shazhi, who was ethnically Chinese but fought for the Mongol Empire, galloped into battles alongside her 10,000 troops earning the Mongol Empire’s highest military and civilian position. Towards the end of the 13th century, two other Chinese women, Shejie and Shigu, even took up arms against each other in the stead of a dead father and husband.

As the numbers of women warriors dwindled following Chinggis Khan’s rise to power in the early 13th century, Khutulun becomes unusual. She’s “held up as a Joan of Arc type character,” says Greenland. Living in the late 13th century, Khutulun was four generations removed from her famous empire-building grandfather Chinggis. Though other warrior women like Shazhi and Shejie are mentioned in historical sources, Khutulun’s story becomes the most widely circulated and leans into literary tropes of the time, says Bruno De Nicola of the University of London. “Marco Polo is trying to impress Europe so he’s not trying to tell a story of a factual Asia,” says De Nicola. He believes there’s likely “a bit of fantasy” in Khutulun’s story, especially when it comes to her ability to defeat any would-be husbands in a wrestling match.

As a military scholar, May, however, doesn’t question Khutulun “was a great wrestler” and capable warrior. “The fact that she leads warriors for years, that suggests that she had not only great leadership skills but she was effective using weapons,” says May. Her story is also corroborated in Rashid al-Din’s Persian chronicle, a fact which convinces Birge Khutulun was a living, breathing warrior—one you’d be foolhardy to mess with. “Finding her both in Marco Polo and Rashid al-Din, the Persian historian, is quite telling,” says Birge. “I don’t think you’d find anybody denying that” she was a real warrior.

As with everything when it comes to the Mongols, parsing out fact from speculation, or even pure fiction, is a near-impossible task. The Mongols themselves left behind only one primary source. Every other source comes from outsiders, usually their enemies. But scholars increasingly believe Mongol warrior women were there, racing across the hilly grasslands of the Eurasian steppe armed with a drawn bow, their arrows ready to fly at any unsuspecting enemy.

The Mysterious Mushroom That Only Grows in Burn Scars

From Italy’s fortress-seizing countess to Angola’s battle-hardened Queen Njinga, these women didn’t back down from a fight.
vikings

From California’s mythic warrior queen to the swole women of Sparta to female hunters in ancient Peru.
war history

She trained a regiment of women and led armies—with a baby in tow.
restaurants