Why It's So Hard to Study the Toxic Dust Blowing From Earth's Youngest Desert - Atlas Obscura
Want to see fewer ads? Become a Member. 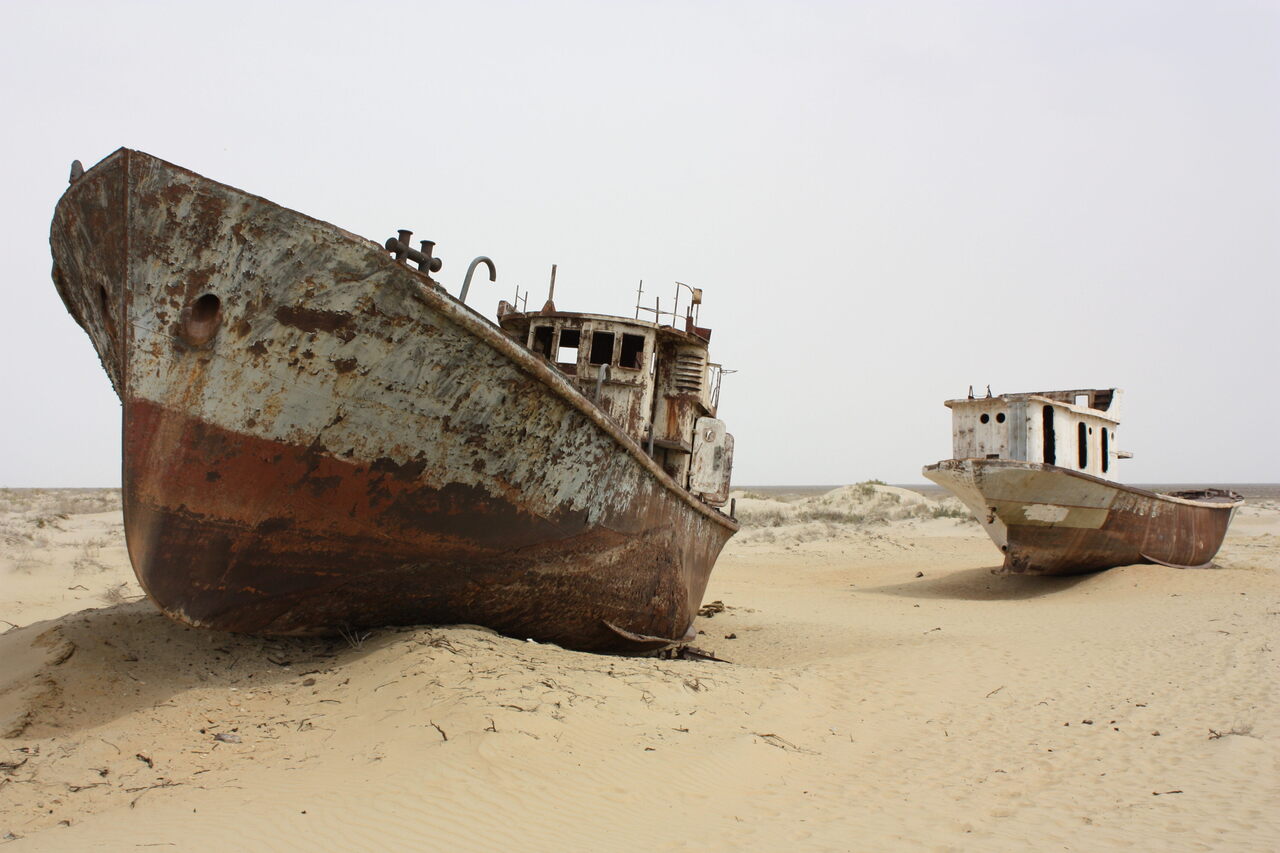 Two fishing vessels nestled in the sands near the former seaport city of Moynaq, Uzbekistan. Arian Zwegers/CC BY 2.0
In This Story
Place

Rusting ships sit in a desert where a sea used to be.
Destination Guide

Along the border between Uzbekistan and Kazakhstan, a fleet of rusted ships sits trapped. This was once the world’s fourth largest inland body of water, but today it’s more dry than wet—a barren, salt-scoured wasteland. What was once known as the Aral Sea is now the Aralkum Desert, or Aral Sands. It’s currently the world’s youngest desert, and acts as a key engine for Central Asian dust storms.

The Aral was once fed by the Amu Darya and Syr Darya rivers, and sustained both a thriving economy and rich ecosystem. Around 1960, the rivers were diverted by the former Soviet Union to feed irrigation networks for cotton production. Over the following six decades, the sea underwent a process never before seen on Earth. Waters retreated from the southern basin, concentrating the sea’s salt. Agricultural runoff brought in both herbicides and pesticides, poisoning the lakebed. Eventually, an empty, salty, toxic desert was all that remained.

“This is the perfect source for dust storms,” says Ralph Kahn, a senior research scientist at the NASA Goddard Space Flight Center, via email. More than 100 million tons of salt dust is blown out of the Aralkum and across Asia each year, creating a serious public health issue across a vast area.

Dust storms in the Aralkum are almost weekly occurrences and can last for days. For those who reside nearby, food and water sources can become contaminated after just one of these storms. Karakalpakstan, an autonomous republic within Uzbekistan, experiences abnormally high rates of tuberculosis, anemia, cancers, liver ailments, birth and genetic defects—all likely in some way caused or exacerbated by the dust. And traces of that same dust have been found as far away as Greenland and Norway.

To understand dust storms, scientists have long relied on remote sensing technology—satellites that can actually see the full scope of such storms and observe their spread. But information obtained via remote sensing only goes so far, and it must be combined with fieldwork in order to ensure findings are correctly interpreted. This is commonly referred to as “ground truth,” explains Thomas Gill*, who studies wind and geology at the University of Texas at El Paso. Ground truth provides critical context for calibrating and correlating large-scale data sets obtained from satellites and provides researchers with details that can’t be observed from space. And according to Gill, it’s a lack of ground truth-type knowledge that is preventing a fuller understanding of Aralkum’s dust storms. “To the best of my knowledge, we don’t have a good set of data of what the conditions are actually like there on the ground to cross-check, double-check, and confirm what the satellite is telling us,” Gill says.

This is largely due to the inhospitable and toxic environment of the Aralkum itself, a reality that is already decades-old. Gill recalls a story from his time researching Owens Dry Lake in Central California. It was around 1990 or ‘91, and Gill was accompanied by a group of then-Soviet scientists interested in the Aral Sea, which was still in the process of drying out. When Gill asked the team why they weren’t conducting fieldwork at the Aral Sea, they responded: “Are you crazy? No way! It’s too remote and dangerous there, you can’t really collect any data, and it’s so treacherous if you go there you could die!” The situation has only worsened since then, and according to Kahn, very few surface data stations exist on the ground in Central Asia.

In the face of such obstacles, researchers must continue to rely heavily on satellite data. But capturing an Aralkum dust storm from space, Gill explains, is like trying to take a picture of a polar bear in a snowstorm. When dust storms rage elsewhere on Earth—like in the Sahara Desert—they eventually blow out over the dark ocean, making them easy to see. But in the landlocked Aralkum, the contrast between the surface and airborne dust is minimal. Plus, clouds often get in the way. Satellites also struggle with quantifying the amount of dust in dust storms, or providing a sense of their contents. “It is not easy to derive the optical properties of non-spherical particles theoretically,” says Kahn, “and it is also difficult to collect adequate samples.” The result is an incomplete understanding of a major ecological and public health problem.

Filling in that understanding, experts say, will require a combination of old and new technologies, to supplement satellites and their limitations. Drones have enormous potential—they’re hard to control in dust storms, but they’re getting better and more robust, says Gill. There are also hybrid systems that bring together a range of data sources. Gill also cites the growing field of chemical sensing, using detectors that can acquire the chemical signature of dust particles in the field. “The Aralkum can be seen as the world’s newest desert,” he says, “and maybe there are some real unusual things going on there, due to the fact that it’s so extreme, so new, so weird, and so unusual.”

*Correction: An earlier version of this story mistakenly reversed the first and last names of one of the individuals we quoted. His name is Thomas Gill, not Gill Thomas. Additionally, Ralph Kahn’s surname was misspelled on second reference. The story has since been updated to address those errors.

14 of the World's Most Charming Libraries

The explanation behind a "drastic," bone-chilling, mysterious weather event in the Upper Midwest.
List

6 Unique Places to Visit in Uzbekistan

From palatial tombs to desert ghost towns, these are the places Atlas Obscura users most want to visit.
Video • PinDrop

3:07
Want to see fewer ads? Become a Member.
From Around the Web
Atlas Obscura Trips
Silk Road Cities of Central Asia
View This Trip
Thanks for sharing!