How a Black-Feathered Dino Inspired a Series of Nerdy Cocktails - Gastro Obscura
Want to see fewer ads? Become a Member. 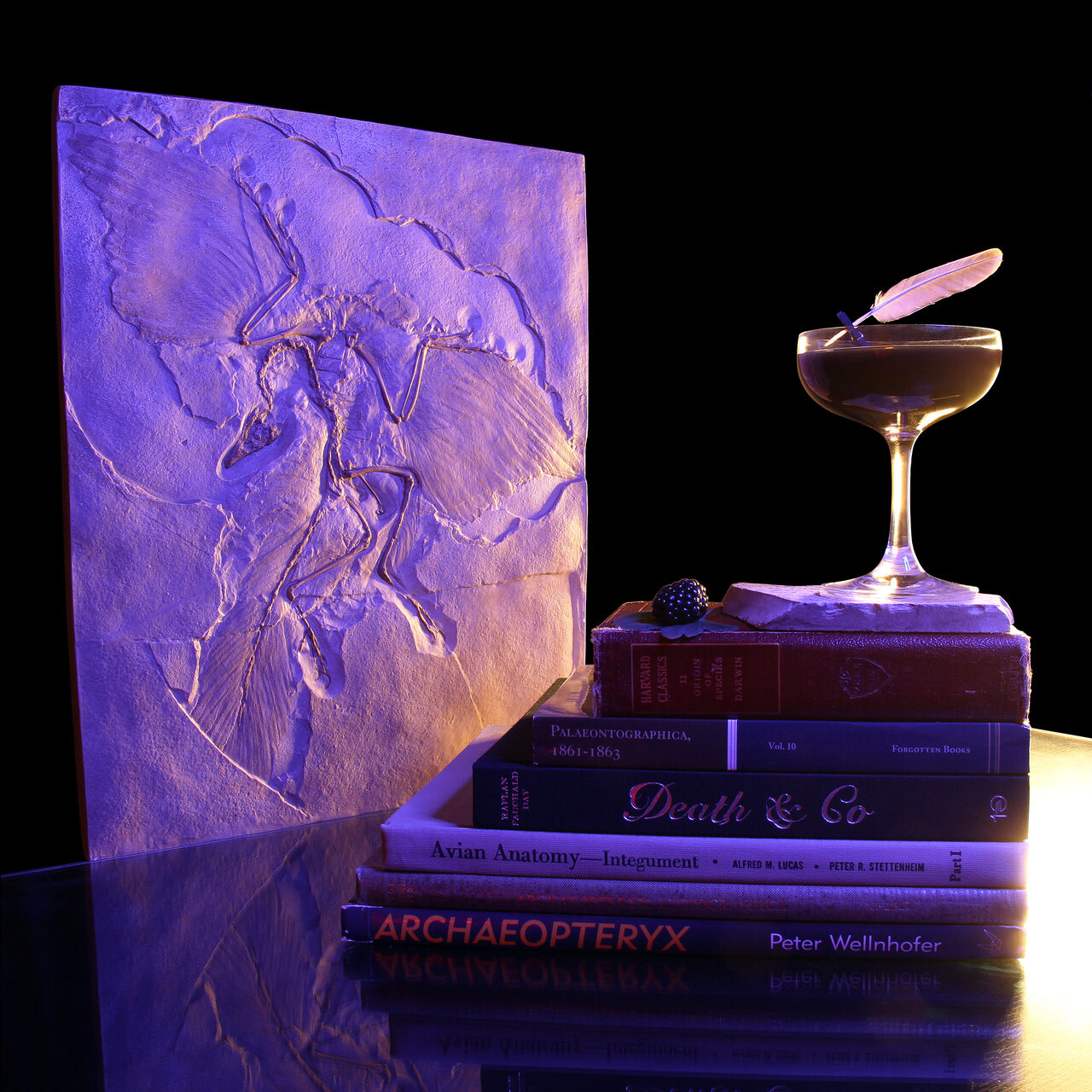 The Archaeopteryx cocktail, which Carney concocted the day his paper was published, is pictured here with a replica of the Berlin specimen. Courtesy Ryan Carney
In This Story
Place

When life gives you lemons, this tropical fruit makes 'em taste like lemonade.

At 3:00 a.m. on September 30th, Ryan Carney, a paleontologist and epidemiologist at the University of South Florida, was in a celebratory mood. It was the 159th anniversary of the first paper published on feathers from Archaeopteryx, a Jurassic-era dinosaur. When paleontologists first unearthed an Archaeopteryx in 1861, Charles Darwin’s The Origin of Species was just two years old. The fossil ended up pushing forward evolutionary theory at the time, showing that a bird-like dinosaur was flitting about millions of years before the existence of T. rex.

More than a century and a half later, Carney’s new paper had just debuted in the journal Scientific Reports. It identified a fossil feather as a primary covert—an external wing feather—of Archaeopteryx, and detailed how Carney’s team had detected small organelles indicating traces of melanin in the fossil, suggesting the feather had originally been a matte black.

Carney celebrated by spending the wee hours of the morning with old friends on Zoom—such is a social life during the coronavirus pandemic—and the conversation turned to mixology. Though he doesn’t have any professional background in mixology, Carney has mixed up craft drinks since graduate school. And as the conversation turned, so too did the gears in his head. Carney got working again that very night. This time, on something to drink.

Carney’s paleontological work involves using 3-D software to better understand what ancient creatures looked like and how they may have moved. Archaeopteryx has been his main research subject for the last eight years, and the ancient bird has fascinated him for much of his life. To honor Archaeopteryx’s probable jet-black hue, he carefully combined melanin-rich squid ink with blackberry soda, Jägermeister (a nod to the fossil feather’s German origins), lime juice, and stone fruit syrup, a tongue-in-cheek reference to the limestone block in which the much-researched fossil was found.

After trying his tasty take on the Archaeopteryx, Carney was thirsty to create more cocktails. The recipes came fast. “I felt like a mad cocktail scientist, nailing down the recipes and the connections with the research. All the creativity that’s involved—that’s the stuff that I am really into,” says Carney. “It’s like a challenge, or a problem.” Each ingredient had to relate in some way to his field of study.

In a matter of days, Carney created a dozen drinks, assembling an alcoholic record of nearly 300 million years. One of his concoctions is a bright green mimosa, garnished with a gingko leaf. Gingko trees, often described as ‘living fossils,’ have grown on Earth as far back as 270 million years ago. The leaf floats in splendid floral combination with bright green Chartreuse liqueur, whose color comes from the chlorophyll in its 130 plant-based ingredients. There’s the hot pink Yi qi martini, with dragon fruit and lychee, a nod to the dinosaur with bat wings that confounds paleontologists with its sub-par flight ability. Carney also mixed up the amber-yellow Lucy in the Skyy With Dulcificum, named for Lucy, the 3.2 million-year-old Australopithecus hominid found in Ethiopia. It includes the Ethiopian honey wine tej, lemon juice, flavor-tripping miracle berries that make sour taste sweet, and Skyy vodka. And then, of course, there’s the deeply dark Archaeopteryx.

Carney has dubbed this body of work ‘paleomixology.’ “What I wanted to do with these drinks is have them represent the different sub-disciplines within paleontology,” Carney says. “So of course with Archaeopteryx, we have dinosaur paleontology, but the Lucy, for example, is paleoanthropology. And the gingko mimosa is paleobotany. So it’s not just dino-centric.”

His hope is to perhaps one day produce a cookbook of paleo-drinks, to showcase the wacky ways in which paleontologists have ferreted out the history of our planet in a more-easily consumable medium than your typical textbook. “Given the fact that there are a dozen drinks already, it’d be really neat to turn it into some sort of a book,” he says. “There are no cookbooks that really deal in this science.” He envisions a pairing of knowledge and drinks, where each recipe comes along with the history of the fossil that inspired it.

In the meantime, the drinks offer tribute to the different characters, human and otherwise, that defined the planet’s evolutionary timeline. Carney isn’t done whipping up drinks yet, either, as he feels an obligation to expand the infant field of paleomixology. Not that that’s a tough task for Carney, who finds this interdisciplinary alcoholic work a great way to blow off steam. After all, he’s also an epidemiologist, currently building digital tools to track outbreaks of diseases such as COVID-19.

For Carney, diving into dino-themed drinks feels like both pleasant distraction and a creative outlet. “It touches on a lot of different facets of my passions, and so being able to mix them all together through mixology is really satisfying,” he says. “And it’s also something that’s satisfying to drink.”

Mix all ingredients together in a coupe glass, leaving the cephalopod ink for last. Stir in the ink slowly, and garnish with a clean feather clipped to the glass.

(Carney also offers a simpler version of this drink, which he calls Urvogel, or ‘first bird.’ “Simply Jäger in a blackberry Izze over ice with a lime wedge,” he says.)

Lucy in the Skyy with Dulcificum

Shake with ice, and strain into a martini glass.

The third episode of TED’s Far Flung podcast was 66 million years in the making.
Video • Wonder From Home

A smoky doorway in Dakar leads to one of the city’s great communal eating experiences.
Napa, California

One man handcrafts "the best sake made outside of Japan" in a tiny desert town on Route 66.
Want to see fewer ads? Become a Member.
From Around the Web
Related