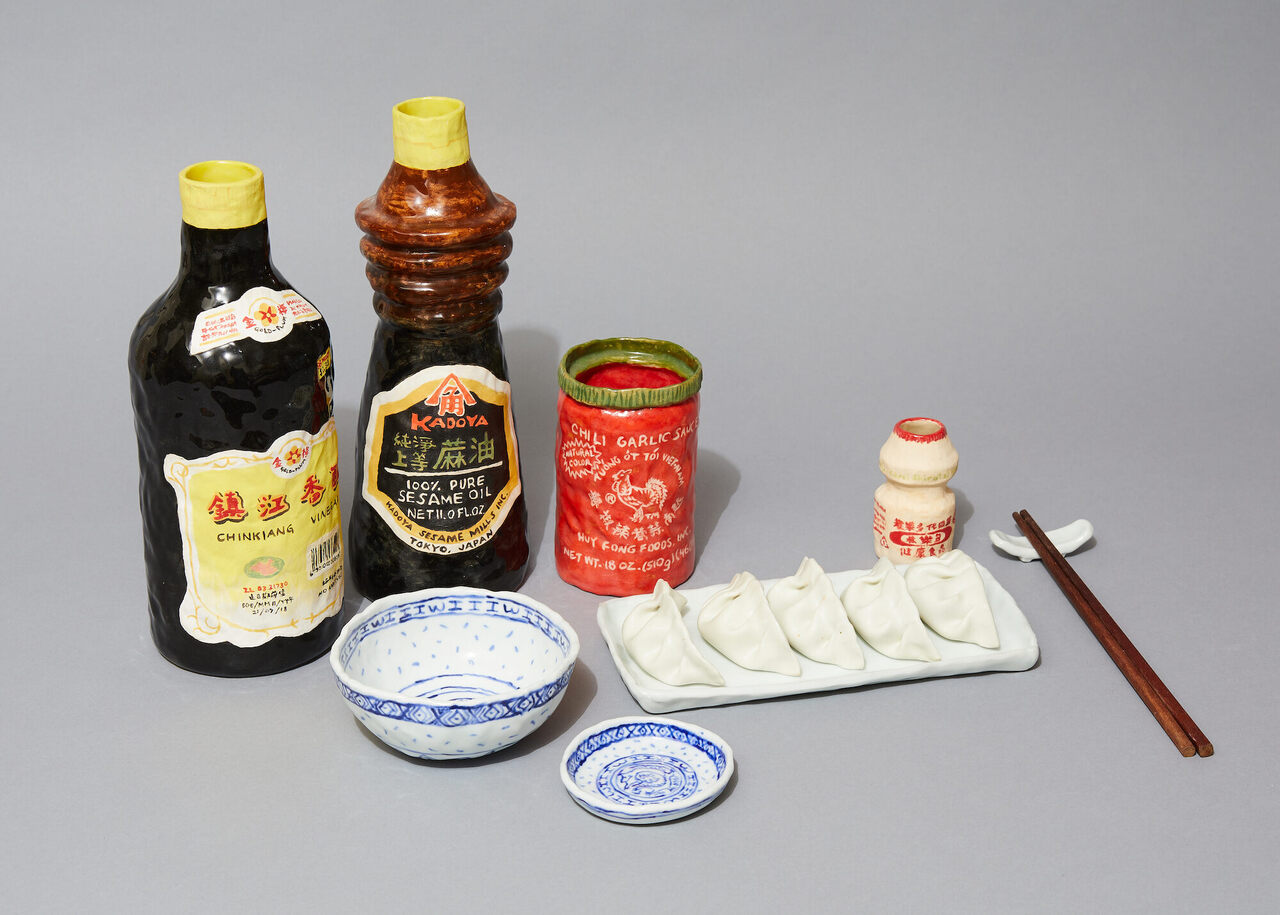 This entire 'meal' is made of clay. "The most important dipping sauce is not soy sauce, but black vinegar,” Shih says. All photos courtesy Stephanie Shih

Isolated in her Brooklyn apartment since March, Stephanie H. Shih has folded dozens upon dozens of dumplings. “I find it soothing,” she says. “I can do it without thinking, so it’s almost like meditation.” But Shih’s dumplings aren’t made of dough—they’re made of clay, and the results are delicate and porcelain-white.

In the past two years, Shih has made more than 1,000 ceramic dumplings, as well as many other replicas of Asian foodstuffs, from jars of chili oil to boxed tea drinks, each hand-crafted and hand-painted. Her work is a visual excavation of the Asian-American pantry, a space steeped in nostalgia and shaped by the experience of diaspora.

“I want to make groceries that feel iconic and are immediately recognizable to people within the community,” Shih says. “Because we have a limited number of brands to choose from—it’s just what was imported—a lot of us have the same memories. I think the pull is so strong for people in the diaspora because these objects really do remind them of home.”

Shih is first-generation Taiwanese-American, but her ceramics speak to the multitude of cultures and culinary traditions within the Asian-American diaspora. She has sculpted cans of Spam, Morinaga caramel candies, Indomie and Chapagetti instant noodle packets, and Yakult—the Japanese probiotic drink that also appeared in the film To All the Boys I’ve Loved Before.

The visual power of these everyday items is clear from Shih’s Instagram account. Scrolling through the feed can feel like successfully navigating an Asian grocery store: I find myself searching for signs of home, much like I do at the helm of a shopping cart in Mitsuwa Marketplace or H Mart. Shih’s ceramics prompt a familiar pang of comfort: Food is one of the most evocative vehicles of identity expression.

“This has gotten me to think about what it means to not really have a physical homeland,” Shih says. “We don’t feel at home in Asia—China, Korea, Japan, Taiwan, wherever—and we do feel at home in America, yet we’re still othered here, especially now in a time that has brought out underlying xenophobia. The community is our homeland, in a way.”

Shih initially began folding ceramic dumplings not as a statement about the complexities of the immigrant experience, but as a personal way to connect her art with her heritage. When she posted images of the results, she received suggestions that she make dumplings that appear dipped in soy sauce or packaged Chinese takeout containers (originally a Western invention to hold oysters). “And a lot of the comments were from white folks,” she says. “They didn’t mean it maliciously, but it did feel like it was a joke, like this work was a novelty.”

Shih’s subsequent piece, a bottle of Gold Plum Chinkiang Vinegar, slyly reclaimed the narrative. “I wanted to give a nod to everyone who actually knows the most important dipping sauce is not soy sauce, but black vinegar,” she says. “And that’s how the whole grocery project started. The more excited the community was to see these objects, the more that drove me to think about diasporic identity.”

Shih often polls her followers to help her decide which food items to create. She asks them what brand of rice they grew up eating, or which oyster sauce is their ride-or-die household staple. The discourse often reflects shared experiences of roaming grocery-store aisles. “For some products, all the answers coalesced around one iconic brand—Kadoya, for sesame oil, Lee Kum Kee for oyster sauce,” Shih says. “But for soy sauce, I got so many answers. There wasn’t really one clear winner.”

The process can also jog one’s memory. Some Asian Americans might recognize the way a product looks but forget its name, or vice-versa. “I can read a bit of Chinese, but I certainly can’t read everything on a soy sauce bottle, so I often think this is the bottle I grew up with, but I’m not sure,” Shih says. “Doing these polls is almost like asking a stranger what my own childhood memory was. It’s sort of a homecoming.” As Michelle Zauner wrote in a 2018 essay for The New Yorker, about shopping in H Mart, “Am I even Korean anymore if there’s no one left in my life to call and ask which brand of seaweed we used to buy?”

Currently, the American Museum of Ceramic Art is showing several of Shih’s grocery store simulacra in a group show on Chinese American ceramics. (The museum is closed due to the coronavirus pandemic, but the exhibition is viewable online.) She is also preparing for a solo exhibition, which will feature 30 soy sauce bottles and 450 dumplings. In the meantime, she continues to take commissions, and has faithfully reproduced such diverse goods as Betty Crocker Fudge Brownie Mix, a can of Goya pink beans, and a bottle of Dr. Brown’s Cel-Ray soda.

“I’ve realized that even people who aren’t in the Asian-American diaspora appreciate the sentiment behind this work,” Shih says. “They want to tap into that feeling. So that’s been really meaningful for me. Even though I think of my work as very much ‘for us, by us,’ people outside the community are really relating to it, too.”

A Fake-Food Maker on the Art of Creating Inedible Meals

For 60 years, this Japanese craftsman has been making silicone dinners that look good enough to eat.
art

They sat on top of a fridge for decades.
art

The Architect Baking Bread Along the Border Wall

Filthy infrastructure has long been a site of artistry and civic pride.
Video

All the size of your thumb.
Read more
Thanks for sharing!