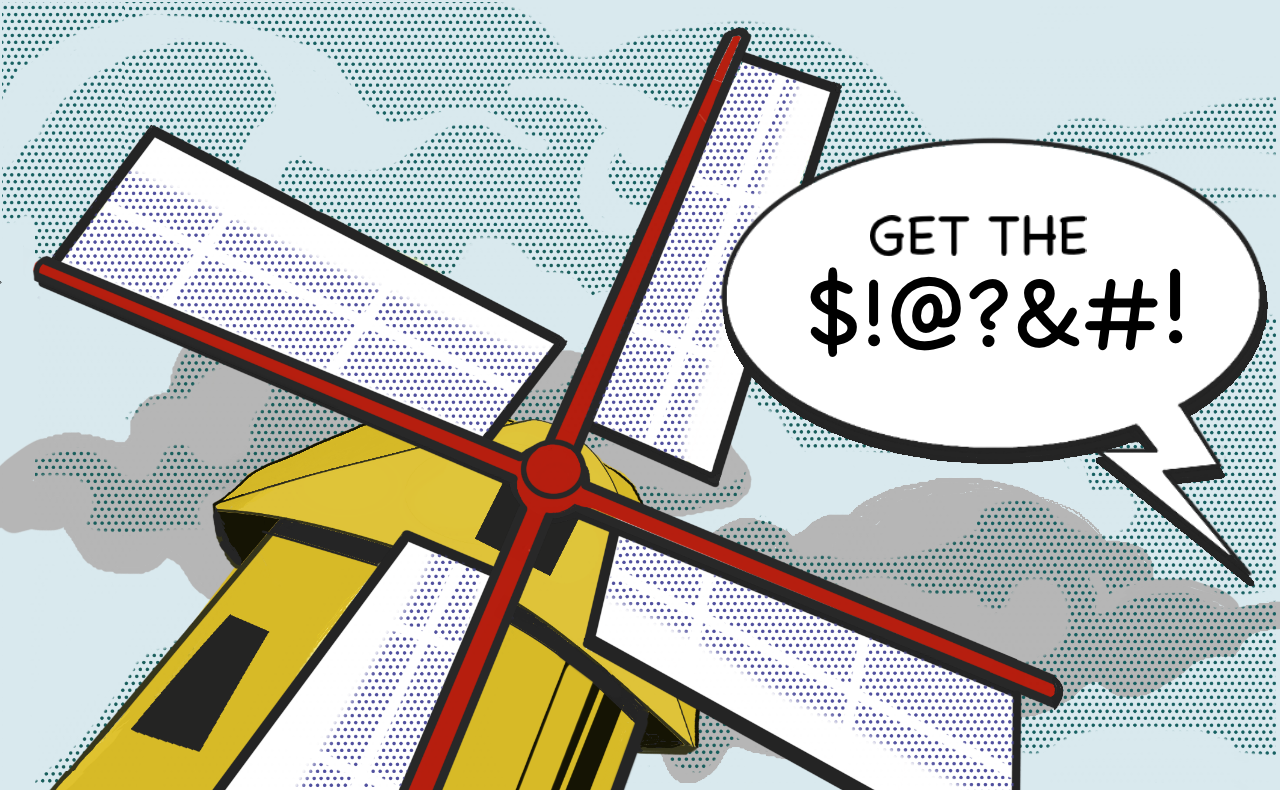 Some people are surprised, even offended, by the Dutch tendency to include illnesses among their curses. All Illustrations: Tobes Studio for Atlas Obscura
In This Story
Destination Guide

Twanna Hines, who grew up in rural Illinois, moved to the Netherlands to pursue a graduate degree at the University of Amsterdam in 2000. Not totally used to the stream of bicycles and trams in the streets of Amsterdam, she wandered into a bike lane and got a mouthful from a passing cyclist. “And my Dutch roommate shouted back, in the Dutch translation, ‘Get cancer, man!’” she remembers. “And I was like, ‘What the hell? That doesn’t make any sense, why would you tell someone to get cancer?’”

This was not some bizarrely creative insult that her roommate came up with. The Netherlands, in fact, is home to a shockingly extensive list of swear words, and the ones you might use to yell at an errant pedestrian are largely medical in nature. You can tell someone you think they’re suffering from cholera, smallpox, or tuberculosis, you can tell them to “Typhoid off.” It is a truly strange quirk of the Dutch language, one that can be off-putting or offensive to those not used to it, and even some who are. Especially today.

“Even ‘Get the corona’ is in use already,” says Ewoud Sanders, a journalist and author who writes about language for NRC Handelsblad, one of the most important Dutch newspapers.

In general, cultures tend to form their profanity around concepts that they fear. In puritanical America and Japan, sexual terms are common. In Quebec, long ruled by the Catholic Church, it’s religious terminology. In the Netherlands, it’s illnesses, at least for some use cases.

The Dutch people I spoke with drew a line between different types of swearing. One kind is the general angry exclamation, what you might yell if you stub your toe. Those are often actually English words, like the ones that refer to excrement or intercourse. The other type is the more interesting one: what you say in anger to another person, or an object or situation that has enraged you in some way. And those are absolutely dominated by medical terminology.

The basic form of this type of swearing is to tell someone to “Get cancer,” with variations for a range of ailments and infections. From this foundation, one can build spectacular and often totally meaningless phrases. One method is also used in Quebecois French: Just list all the bad words you can think of, one after another. So you could say, “Get cancer-typhoid-smallpox,” and that is both more creative and more aggressive than the simple “Get cancer.”

You can also add other modifiers to these diseases to strengthen them. In Rotterdam, says Sanders, you might say, “Get the cancer that goes all the way over the Maas River,” which indicates a very large tumor indeed. That regional variation would be incomprehensible to someone from, say, Amsterdam. Or you could spice things up with animals. “Get the pig cholera!” you could scream at someone who bumped into you and knocked your stroopwafel to the ground. “If you ask 10 Dutch people, they would all have their own palette of the words they use,” says Dick Smakman, a linguist at Leiden University.

There is a limit to exactly which illnesses make any sense as profanity, though it’s a fluid repertoire. If you pick an illness that has never been used in the Netherlands in this way, you might get some quizzical looks. In general, mild illnesses, non-fatal annoyances, these don’t really show up in the dictionary of Dutch swears.

The most profane illnesses are, largely, major, plague-type conditions, ones that have swept through the Netherlands (and most other places) and wiped out huge segments of the population. Many are now sort of archaic, perhaps having been eradicated in the country itself. The newer (or more newly known) ones all share a certain mass-death element: AIDS, cancer, coronavirus. Another category that shows up is medicalized insults directed at one’s mental abilities, some of which are today considered archaic or offensive.

“The Dutch people are very straightforward and blunt, we have a reputation of this, and that’s also in the cursing,” says Sanders. But for those who aren’t Dutch, some of this can seem wildly inappropriate. “You’re talking about a culture that celebrates Santa with slaves,” says Hines. “So there’s a certain level of what might seem like outright racism or homophobia or a lack of general graciousness to people who are not like you.” The Netherlands is more than three-quarters Dutch, and the Dutch are, like people in most European countries, grappling with how to speak to people who don’t look or act like them, but who are now part of their nation.

Sometimes in the Netherlands this is portrayed as bluntness or honesty, or a rejection of political correctness. Those are thin, short-lived arguments, and curses do fall out of use. Sanders said that some of them are restricted to kids—perhaps like the way American kids use the word “gay” until they grow up and realize they shouldn’t.

By far the most common of the Dutch medical curses is “cancer,” or kanker, which in the Netherlands, as in many other places, is among the most common causes of death. In practice, it is a pretty mild swear word, and a versatile one. You can refer to your kanker shoes, which are worn out or uncomfortable. Kankeren, the verb, means “to complain.” You can attach it to basically any other swear word: kanker hoer, or “cancer whore,” is a popular one. You can also say, “You suffer from cancer coronavirus” these days. “It doesn’t make any sense whatsoever, but it makes ‘Get the corona’ stronger,” says Sanders.

Most of these swears are fairly disconnected in use from the actual diseases they reference. Smakman had to really think about some of the examples I’d found. He knew and had heard them used as swear words, but hadn’t made the connection to the illness until I mentioned them. Klerelijer, for example, means “cholera-sufferer,” but the “cholera” part of the word is a little mangled and bastardized from the original. In fact, klere literally translates as “clothes,” which is even more confusing. Sanders says he thinks “corona” will eventually end up as krone, or something like that.

The basic question of why the Dutch use such a strange selection of words has no conclusive answer. “We’re a densely populated country, and there’s a tradition of being very neat and tidy,” says Sanders. In researching his book on this form of Dutch profanity, he uncovered versions of this illness-based cussing reaching back to the 1910s. At the time, it was sometimes very long and sing-songy, often rhyming. But the roots of the practice seem to lie somewhere in the Dutch character, or at least the stereotype of it.

It’s hard to rank countries by germophobia or cleanliness. There are plenty of accounts of the “military” cleanliness of Dutch households. One study suggests that the Dutch dominance in the European dairy industry, and its demand for hygiene, is connected with a Dutch love of cleanliness. On the other hand, the Dutch also showed up in a survey indicating they wash their hands after going to the bathroom less frequently than residents of any other European country, though that might just be classic Dutch honesty skewing the results. Even Dutch Americans, to honor their Dutch heritage, literally scrub streets before a tulip festival, though that seems to be like more of a guess based on stereotypes of cleanliness than something that’s actually done in the Netherlands.

“I think every epidemic or pandemic that came through the Netherlands brought new curses,” says Sanders. “It’s just our biggest fear.” Smakman says the same thing. “I think absolutely we have germophobia, most people I know have that,” he says. “If Dutch people go to Sweden, we feel at home. But I lived in England, and the moment you cross over to England, cleanliness is much lower. Even if you go to a pub, you think, ‘This is not clean.’” Given that, it makes some sense that the worst thing you could wish on someone is to have an illness—historically connected to dirtiness, uncontrollable, and very un-Dutch.

You can learn a lot from slang.
kickass women

Is it possible to take the misogyny and bigotry out of cursing?
plague

This isn't the first time they've come in handy during a pandemic.
Video