How Homes in Bali Are Designed for Harmony—and to Keep Demons at Bay - Atlas Obscura
Want to see fewer ads? Become a Member. 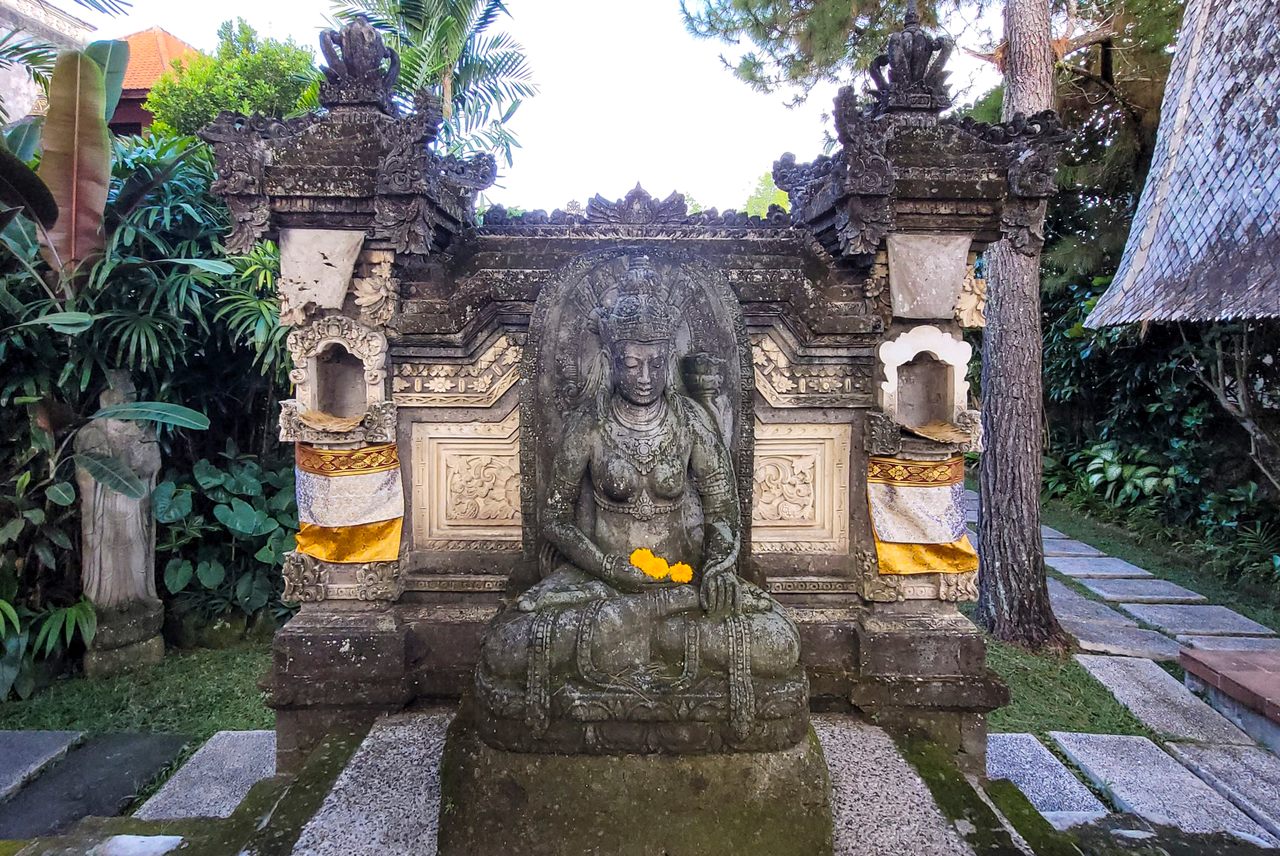 An aling-aling is a half-wall opposite a gate that can keep spirits at bay. Ronan O'Connell

Each evening before he goes to bed, I Wayan Gama completes a simple ritual to protect his family as they sleep. The artist walks through the tidy grounds of his family’s compound in Keliki, a jungle-draped village in Bali, Indonesia, and locks the metal doors of the stone gateway that is the sole entrance and exit. He does this not to deter criminals, but to block something less visible but just as potentially harmful.

This Hindu-majority island in the world’s most populous Muslim nation is inhabited, it is said, by spirits that can infest a home and rain misfortune on its occupants. Unless, that is, a compound is built according to ancient design rules that intercept them, Gama explains.

Bali’s most famous devil is Rangda, queen of the witches, who is engaged in an eternal battle with Barong, a benevolent spirit honored by the island’s famous and colorful barong dances. While some Balinese people fear specific demons or spirits, Gama is more concerned with the invisible, toxic influence they represent. Keeping this energy from flowing into a home involves everything from the size, position, layout, and orientation of buildings; to the presence of shrines, offerings, and artwork; to the distinctive walls and gates that surround them.

Gama’s house is built according to a few Balinese design principles, one of which is known as asta kosala kosali, he says. It is related to feng shui, the Chinese system that organizes interior and exterior spaces to create harmony between humans and their surroundings. Gama says every home in Keliki is built in adherence to asta kosala kosali, which is oriented to the cardinal directions and dictates how each structure within a home compound should be used.

Many Balinese people believe humans and their environment are part of one cosmic consciousness, he says, so a precise balance in the design of a home maintains a balance between positive and negative forces. “If we don’t disturb the others,” he says, “then the others won’t disturb us.”

Another design feature that keeps negative energy at bay are the multiple barriers around traditional Balinese homes to block the spirits believed to inhabit the island’s jungles, rivers, graveyards, and crossroads, according to I Kadek Merta Wijaya, a lecturer in the architecture department at Bali’s Warmadewa University. Collectively, these design elements are called pelinggih penunggun coral. Though this is an ancient concept, it has remained popular, with many new homes in Bali incorporating it, Wijaya says.

The first protective layer built into these homes attempts to confuse demons, the next to pacify them, and the last to obstruct them, he says. A demon approaching a Balinese home will first encounter stone or brick perimeter walls, close to six feet tall, called tembok penyengker. They create the impression of a fortress. A tenacious spirit might locate the sole, narrow entrance to these compounds, called an angkul-angkul, but in front of this gate they’ll find a gift.

Woven coconut-leaf bowls, called canang sari, are filled with fresh flower petals, and are often placed next to a small Hindu shrine. Should the demon be unpacified by the offering and persist to breach the compound, they’ll need to ascend a small staircase and pass through the angkul-angkul. If this gate is open, Wijaya says, the spirit will collide with a final obstacle, an aling-aling, a half-wall placed several feet back from the gateway.

Bali’s demons can only move in straight lines, so the aling-aling is impenetrable. Embellished by intricately carved Hindu deities and motifs, these barriers can also be found in Balinese guesthouses, hotels, restaurants, and temples. Most tourists to Bali have to walk around them at some point, usually without recognizing their cosmic role.

Most, also, wouldn’t understand the spiritual principles that determine the orientation of coastal buildings across Bali. The island is ringed by resorts, hotels, and villas positioned to maximize ocean views. Observant travelers might notice that most local homes actually turn away from those same attractive vistas.

In Balinese lore, demons inhabit the underworld or kelod, in the seaward direction, so many Balinese people instead face their traditional homes toward kaja, or the island’s volcanoes, where their ancestors reside. The urge to pacify spirits extends to active measures, in the form of ritual offerings and performances, such as barong dances or calonarang dramas.

The balance between Bali’s positive and negative spiritual forces is more than dichotomy of good and evil, says Kaja McGowan, an art historian at Cornell University. “The deeper underlying philosophical assumption regarding negative spirits, whether in the home or anywhere else for that matter, is that the universe and all its contents are made up of one force,” says McGowan, who has spent many years studying Balinese history and culture. “This living force, sakti, takes many forms, from human beings to volcanoes to invisible spiritual beings. Since all beings are essentially made from the same substance, none can be essentially good or bad, and moral judgements are relative to the circumstances of the actions.”

So what are considered Balinese demons are not necessarily malevolent—and gods not wholly benevolent. Rather than being terrified of demons, McGowan says, Balinese people respect the threat they represent. They are particularly wary when outside their homes at night, or near certain types of locations, crossroads and graveyards in particular. “The term for these places is called tenget, containing great supernatural power,” McGowan says. “You will often see offerings placed in small shrines at these locations.”

Should the shadowy entities that lurk in these sites then stalk a Balinese person, their goal is to get home, where design principles can protect them, Gama says—not like a rampart, but rather as a kind of landscape that guides and channels those spiritual forces. Outside of a temple, he adds, there is no more secure place than a traditional Balinese home.

Puzzle Monday: Living With the Dead in Madagascar