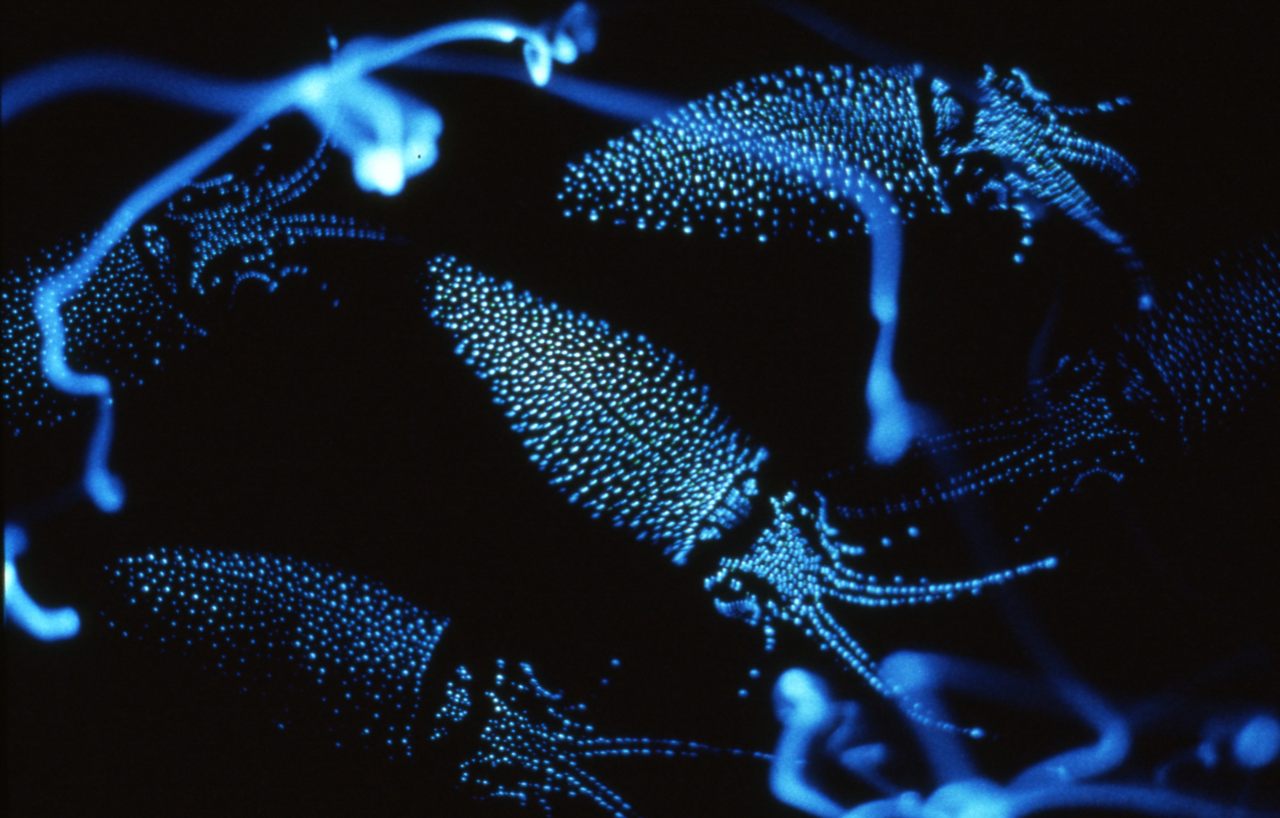 Bioluminescent firefly squid. Courtesy of the Hotaruika Museum
In This Story
Place

The Firefly Squid of Toyama Bay

Every year around April and early May, the waters of Toyama Bay, a fishing port in central Japan, glow an otherworldly blue. Though the dazzling phosphorescent display resembles the celestial constellations of the night sky, its source comes from the depths of the oceans. Watasenia scintillans, also known as firefly squid, or hotaru ika in Japanese, emit a mesmerizing light courtesy of a network of thousands of photophores situated all over their 3-inch bodies. While most sea creatures, like the Hawaiian bobtail squid, derive their radiance from symbiotic bacteria colonies, these tiny cephalopods are a rare species that generates its own light.

For the rest of the year and the rest of the world, these enigmatic ocean fireflies dwell far from human sight at a depth of 600 to 1200 meters, a place in the ocean that marine biologists refer to as the twilight zone. During this brief window, however, millions swim up the canyon-like floor of Toyama Bay to go out in a blaze of glory. Over the course of a frenzied three months, they mate, lay their eggs, then almost immediately start to die.

“There is little artificial light on the ocean [at Toyama Bay] from midnight to early morning, so the blue light of firefly squid appears even more beautiful in the darkness,” says Masaki Kobayashi, a representative from the Hotaruika Museum in Namerikawa. Every once in a while, thousands of firefly squid will beach themselves on the shore, bathing the coastline in electric blue.

While most travelers come for the light show, they stay for the food. Kousai, the museum’s onsite restaurant, serves hotaru ika in dishes ranging from pastas to sashimi. Increasingly, chefs at Japanese restaurants are highlighting firefly squid for the few short months when fishermen in Toyama Bay can catch it.

“Seasonality is regarded as one of the most important elements in Japanese cuisine,” says chef Nobuhiro Yoshida, who helms the kitchen at Kozue, a kaiseki restaurant at the Park Hyatt Tokyo. “I prefer to pair hotaru ika with spring vegetables such as bamboo shoots and wild plants from the mountains, which usually have subtle bitterness. Hotaru ika’s rich flavor and sweetness match the bitterness very well.”

For locals, Kobayashi says, the annual torrents of firefly squid herald the arrival of spring. Since 1998, the Hotaruika Museum has been leading late-night boat tours into Toyama Bay. Visitors come from all over Japan to witness the spectacle of billions of tiny lights blinking in and out as the squid attract mates, deter predators, and flash messages to one another.

Although much of Toyama Bay’s luminous catch gets scooped up by the Japanese market, chefs farther afield are seeking out the tiny squid as a sustainable delicacy. Geoffrey Lee, chef and co-owner of Jū-Ni, a Michelin-starred sushi restaurant in San Francisco, acknowledges that some diners were initially daunted by firefly squid when they first began appearing on his omakase menus.

“At first, some guests are kind of intimidated by the appearance of it, because not too many people [here] have eaten a whole squid before. So when they see this deep purple creature with legs, they think it looks like an alien,” Lee says. In the years since he began serving hotaru ika, demand has grown, both from repeat customers and curious diners who spied the dish on the restaurant’s social media.

For those in the know, the firefly squid’s body contains a highly coveted surprise. “The outside has a nice meatiness to it, but the majority of the flavor comes from the innards, which are very creamy,” Lee says. Rather than remove those rich internal organs in order to serve the firefly squid raw, Lee prefers them boiled, blanched, and served whole. “We reheat them on the grill, so it’s almost like charred calamari. We pair it with a house-made mustard miso sauce to complement the creaminess, as well as green onions or chives.”

Watasenia scintillans’ distinctive taste and texture are worth seeking out, but what makes it so special is its inherent temporality. Much like their namesake insects, firefly squid spend no more than a year on this Earth, but manage to produce something hauntingly beautiful in their short time. As Lee says, “It looks like the Northern Lights in the ocean.”

The region's first and only locally-run hatchery provides a boost for both fishers and the imperiled royal sea snail.
ships

Eating local doesn't mean what it used to.
Video • Object of Intrigue