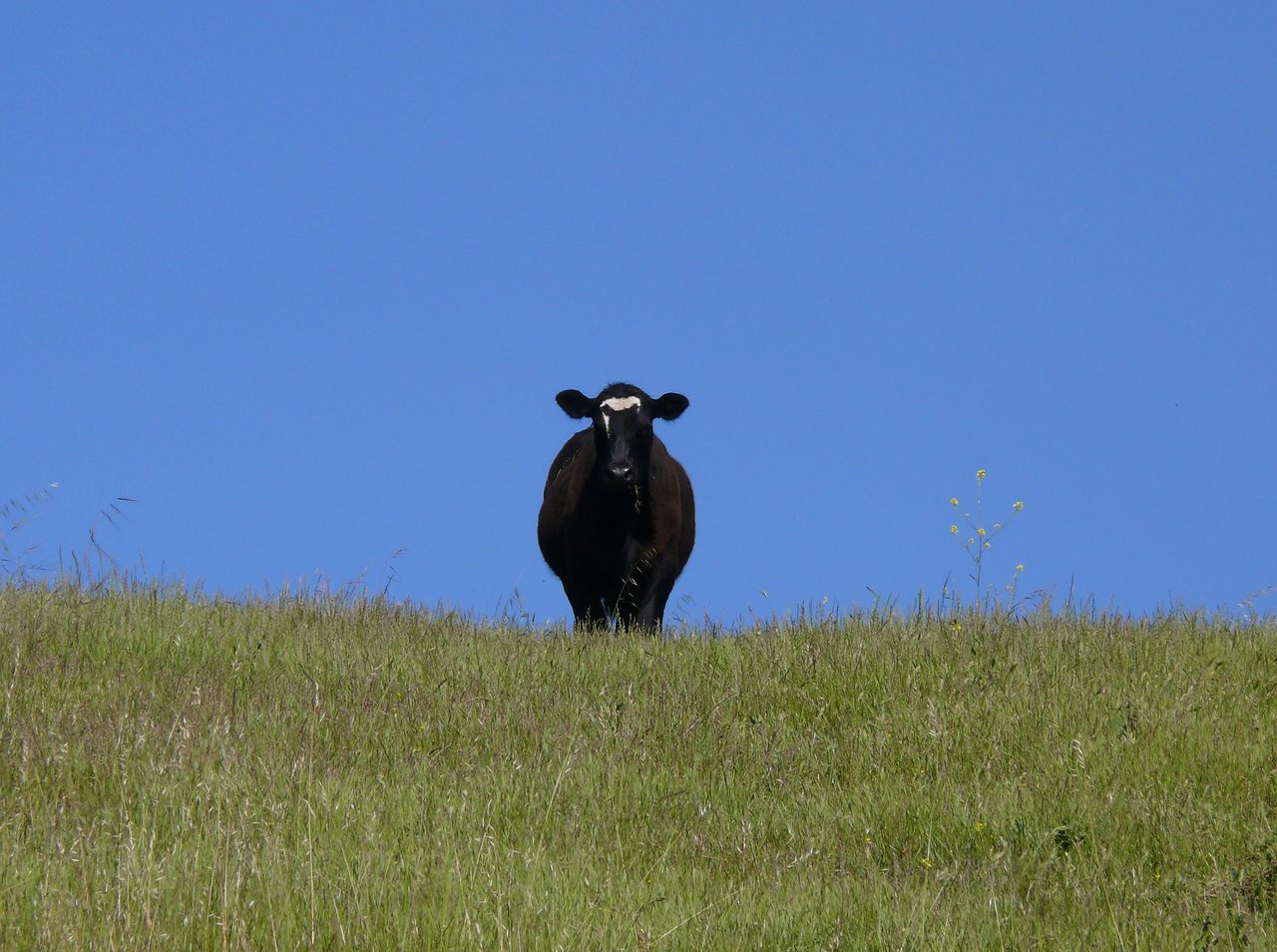 Even miles inland, cows' overgrazing can have offshore consequences. docentjoyce, CC BY 2.0/flickr
In This Story
Destination Guide

Southern California’s beaches bustle with year-round activity—tourists taking selfies, surfers waiting for the perfect wave, seagulls on the prowl for scraps. Beyond the surf, however, sand gives way to mud, and lots of it, on a narrow band of mostly empty continental shelf that stretches some 250 miles along the coast. Scavengers such as crabs and burrowing worms dominate this dull mudscape, which is often obscured by swirling sediment.

The culprit behind this wasteland? Cows, says Susan Kidwell, a paleontologist at the University of Chicago who made the surprising connection. A few years ago, Kidwell was sifting through seafloor samples from three sites near greater Los Angeles, looking for shards of fossilized shells under several inches of silt. She found pieces of older shells but, unlike the shells of burrowing clams present on the seafloor today, these fragments belonged to filter feeders such as scallops and brachiopods—an ancient group of animals sometimes called lamp shells—who filter nutrients out of the water column.

Kidwell and fellow researcher Adam Tomašových, of the Slovak Academy of Sciences, had stumbled upon a lost ecosystem. The remains of other invertebrates in the muck, including tube worms, barnacles, and colonies of tiny invertebrates called bryozoans, pointed to an entire community that once thrived on a rocky seafloor. Like the brachiopods, these creatures were also mostly absent from the mud-coated shelf today.

Kidwell and Tomašových were perplexed by the stark difference between the shelf’s past and present ecosystem. In a 2017 study, they dated nearly 200 of the fossilized brachiopod shells to reconstruct the demise of these filter-feeders. They predicted this ancient ecosystem gradually declined over thousands of years as California’s sea levels fluctuated. However, the shells told a different story. The population of brachiopods had thrived on the shelf for some 4,000 years before suddenly crashing 150 years ago. “We were completely blown away when we got the results,” Kidwell says. “They survived into the present day only to disappear.”

As the timeline took shape, the mystery of the muddy shells only deepened. Kidwell investigated the usual suspects of marine degradation—pollution, climate change, overharvesting—but the chronology wasn’t right. By the time Los Angeles was urbanizing in the late 19th century, this ecosystem was already coated in mud. In fact, when the brachiopods vanished, what we now know as Hollywood was little more than farmland.

Then the lightbulb went off for Kidwell. “The only thing it could have been was cows,” she says. According to her research, the arrival of livestock with Spanish missionaries in the 1770s represented the biggest change to Southern California’s coastal ecosystem prior to urbanization. Left to roam free, cattle and horse populations exploded like microbes across a petri dish. By the mid-19th century, the legions of livestock were compacting the soil as they overgrazed native vegetation. Coupled with a general lack of knowledge about soil conservation and Southern California’s semi-arid climate, where dry periods are punctuated by heavy rains that maximize runoff, the conditions led to what Kidwell calls a “perfect storm” for enormous amounts of sediment washing into the ocean.

A separate study of the muddy bottom of Santa Monica Bay tells a similar story. Nathan Kemnitz, a geochemist and Ph.D. candidate at the University of Southern California who was not involved in Kidwell’s project, collected core samples to understand how the rate of sediment entering the bay had fluctuated over the last 250 years. His results were in line with Kidwell’s research. “Sedimentation rates were slower in the early 1800s and then increased sometime in the late 1800s because of the increased farming and grazing,” Kemnitz says.

Surprisingly, the amount of sediment entering Santa Monica Bay remains high today despite a significant reduction in the livestock population of urban Los Angeles. “It pretty much increased when [Kidwell] predicted and then just stayed at that same elevated rate,” Kemnitz says. He believes that factors such as urban runoff and sewage discharge, which are ongoing, help to explain the higher overall rate of sedimentation.

The smothering sedimentation phenomenon is not unique to Southern California. Relatively shallow continental shelves fringe many of the world’s coasts, often extending miles offshore. Animals that attach themselves to the shelf seafloor, such as the European flat oyster, risk burial under silt. Once a staple of Europe’s North Sea, the oysters were harvested to the brink of extinction during the 19th century. So, when Lasse Sander, a physical geographer at Germany’s Alfred Wegener Institute, dated oyster shells from a collapsed reef in the German Bight, he was surprised to find the reef’s demise dated to around the year 700, long before overfishing of the North Sea’s shelf began. Like Kidwell, he turned to history to explain this anomaly. Much like California in the 19th century, early Medieval Europe was marked by environmental upheaval. An expanding human population clear-cut vast tracts of forest, which increased erosion and sent huge amounts of dirt into the North Sea, smothering the oysters.

Sander says the demise of both the North Sea oysters and the brachiopods off Southern California’s coast are examples of how environmental degradation on land is linked with the health of the ocean. “You have to connect the hinterland of a coastal system with the marine ecosystem,” he says. Similarly, Kidwell believes these two cases illustrate how far the human imprint on a landscape can spread. “This demonstrates the ability of land use to impact not only local lakes and lagoons but the open continental shelf,” she says.

Although oysters remain scarce in the North Sea, a small piece of Southern California’s earlier shelf ecosystem persists off Catalina Island, one of the Channel Islands less than 30 miles southwest of Los Angeles. Thanks to less intense grazing practices on the island, its surrounding shelf is still a lively palette of orange, pink, and yellow brachiopods and scallops. Anchored to rocky outcrops, the animals filter bits of sediment from the water, offering a clear glimpse of the lost ecosystem that once thrived all along Southern California’s coast.

The Quest to Collect the Stories of Bengalis in Harlem

Lauded for her research on gentle giants of the sea, Andrea Marshall is using her fame to find hope for our troubled oceans.
Want to see fewer ads? Become a Member.
From Around the Web
THE GASTRO OBSCURA BOOK
Taste the World!
An eye-opening journey through the history, culture, and places of the culinary world. Order Now