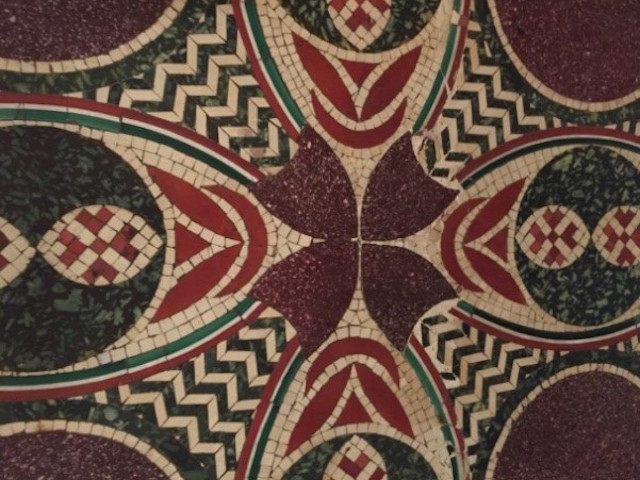 A section of the mosaic, which was 4 by 4 feet. Manhattan District Attorney

Most people wouldn’t choose to make a coffee table from art belonging to a bloodthirsty, tyrannical, sex-crazed Roman Emperor. But antiques dealer Helen Fioratti had no idea that the mosaic that sat in her living room for decades once belonged to Caligula, she told NBC News, until police showed up to take it away.

Fioratti acquired the striking piece 45 years ago, from a family of aristocrats. The mosaic, they told her, had been found in Lake Nemi, nearby the family’s home, in the 19th century. She spent thousands of dollars to buy it from them, shipped it to New York, and had it turned into a coffee table, which sat in her Upper East Side apartment for years.

In the past months, though, the Italian military police’s Art Recovery Unit and New York’s district attorney office have been working to repatriate stolen Italian art, and the mosaic caught their attention. (It’s not clear exactly how.) The piece, according to the Italian unit, came from a elaborately decorated ceremonial ship from the reign of Caligula in the first century A.D.

Caligula’s rule only lasted four short years and ended in his assassination, after which the ships were sunk in Lake Nemi. In the 1920s, they were excavated, and the mosaic flooring brought to the Ships of Nemi Museum in 1936. That museum was used as a bomb shelter in World War II, and few of the antiquities survived, making the mosaic that much more valuable.

Now, it’s being returned to Italy, along with other recently rediscovered art. Fioratti told NBC News that she had no idea that it was stolen and was sad to see it go.

Found: A House Full of Art, All Stolen

The thief claims he suffers from kleptomania.
nazis

From a Nazi code machine found at the bottom of a bay to a vintage Babe Ruth card hidden in a piano.
sundials

A tribune of the people is still celebrating his electoral victory.
art

A Ghostly Portrait of Mary, Queen of Scots, Was Hidden for Centuries