The Titanic Wreck Is a Landmark Almost No One Can See - Atlas Obscura
Want to see fewer ads? Become a Member. 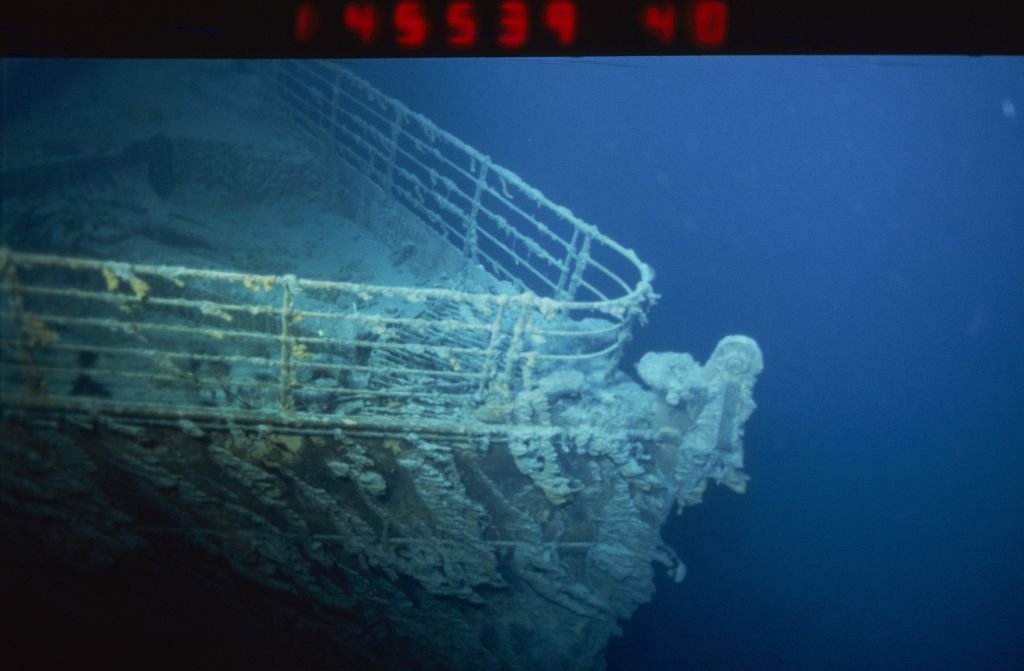 The wreck of the RMS Titanic, photographed in 1996. Xavier DESMIER/Gamma-Rapho/ Getty Images

The bride wore a flame-retardant suit—and so did the groom. In July 2001, an American couple got married in the middle of the Atlantic Ocean, thousands of feet below the surface. In the background was an international landmark every bit as familiar as the Eiffel Tower, the Taj Mahal or any other postcard-perfect wedding photo destination. David Leibowitz and Kimberley Miller wed on the bow of the Titanic shipwreck, in a submarine so small they had to crouch as they said their vows. Above the water, Captain Ron Warwick officiated via hydrophone from the operations room of a Russian research ship.

The couple had agreed to the undersea nuptials only if they could avoid a media circus, but quickly became the faces of a troubling trend: The wreck of the Titanic as landmark tourist attraction, available to gawk at to anyone with $36,000 singeing a hole in their pocket. (Leibowitz won a competition run by diving company Subsea Explorer, who then offered to finance the costs of their wedding and honeymoon.)

As opprobrium mounted, particularly from those whose relatives had died aboard the ship, a Subsea representative told the press: “What’s got to be remembered is that every time a couple gets married in church they have to walk through a graveyard to get to the altar.” Was the Titanic no more than an ordinary cemetery? The event focused attention on a predicament with no single answer: Who did the wreck belong to, what was the “right” thing to do to it, and what was the point of a landmark that almost no one could visit?

People had been wrestling with earlier forms of these questions for decades, long before the nonprofit Woods Hole Oceanographic Institution discovered the Titanic wreck in 1985. The most prominent of these earlier dreamers was Briton Douglas Woolley, who began to appear in the national press in the 1960s with increasingly harebrained schemes to find, and then resurface, the ship. One such scheme involved him going down in a deep-sea submersible, finding the ship, and then lifting it with a shoal of thousands of nylon balloons attached to its hull. The balloons would be filled with air, and then rise to the surface, dragging the craft up with them. As Walter Lord, author of Titanic history bestseller The Night Lives On, ponders, “How the balloons would be inflated 13,000 feet down wasn’t clear.”

Next, Woolley coaxed Hungarian inventors aboard his project. The newly incorporated Titanic Salvage Company would use seawater electrolysis to generate 85,000 cubic yards of hydrogen. They’d fill plastic bags with it, they announced—and presto! But this too was a wash. They had budgeted a week to generate the gas; a scholarly paper by an American chemistry professor suggested it might take closer to 10 years. The company foundered and the Hungarians returned home. (In 1980, Woolley allegedly acquired the title to the Titanic from the ship and insurance companies—his more recent attempts to assert ownership have proven unsuccessful.)

Woolley might not have raised the Titanic from the depths, but he had succeeded in winching up interest in the vessel, and whether it might ever see the light of day again. In the following decade, some eight different groups announced plans to find and explore the ship. Most were literally impossible; some were practically unfeasible. One 1979 solution involving benthos glass floats was nixed when it became clear that it would cost $238,214,265, the present day equivalent of the GDP of a small Caribbean nation.

In the early 1980s, various campaigns set out to find the ship and its supposedly diamond-filled safes. But as they came back empty-handed, newspapers grew weary of these fruitless efforts. When the Woods Hole Oceanographic Institution set sail in 1985 with the same objective, it generated barely a media ripple. Their subsequent triumph in early September made front page news: the New York Times proclaimed tentatively: “Wreckage of Titanic Reported Discovered 12,000 Feet Down.”

Within days of its discovery, the legal rights to the ship began to be disputed. Entrepreneurs read the headlines and saw dollar signs, and new plans to turn the Titanic into an attraction began to bubble up to the surface. Tony Wakefield, a salvage engineer from Stamford, Connecticut, proposed pumping Vaseline into polyester bags placed in the ship’s hull. The Vaseline would harden underwater, he said, and then become buoyant, lifting the Titanic up to the surface. This was scarcely the least fantastical of the solutions—others included injecting thousands of ping pong balls into the hull, or using levers and pulleys to crank the 52,000-ton ship out of the water. “Yet another would encase the liner in ice,” Lord writes. “Then, like an ordinary cube in a drink, the ice would rise to the surface, bringing the Titanic with it.”

Robert Ballard, the young marine geologist who had led the successful expedition, spoke out against these plans. The wreck should not be commercially exploited, he said, but instead declared an international memorial—not least because any clumsy attempt to obtain debris from the site might damage the ship irreparably, making further archeological study impossible. “To deter would-be salvagers,” the Times reported, “he has refused to divulge the ship’s exact whereabouts.”

Somehow, the coordinates got out. Ballard’s wishes were ignored altogether: in the years that followed, team after team visited the wreck, salvaging thousands of objects and leaving a trail of destruction in their wake. Panicked by the potential for devastation, Ballard urged then-chairman of the House Merchant Marine and Fisheries Committee, Congressman Walter B. Jones, Sr., to introduce the RMS Titanic Maritime Memorial Act in the United States House of Representatives. The Act would limit how many people could explore and salvage the wreck, which would remain preserved in the icy depths of the Atlantic.

Despite being signed into law by President Ronald Reagan in October 1986,* the Act proved utterly toothless. The Titanic site is outside of American waters, giving the U.S. government little jurisdiction over its rusty grave. In 1998, the Act was abandoned altogether.

In the meantime, visits to the site had continued. In 1987, Connecticut-based Titanic Ventures Inc. coupled with the French oceanographic agency IFREMER to survey and salvage the site. Among their desired booty was the bell from the crow’s nest, which had sounded out doom to so many hundreds of passengers. When pulled from the wreck, the crow’s nest collapsed altogether, causing immense damage to the site. People began to question whether it was right for people to be there at all, let alone looting what was effectively a mass grave. Survivor Eva Hart, whose father perished on the ship, decried Titanic visitors as “fortune hunters, vultures, pirates!”—yet the trips continued. A few years later, director James Cameron’s team, who were scoping out the wreck for his 1997 blockbuster, caused further accidental damage.

Gradually, researchers realized that nature, too, had refused to cooperate with the statute introduced above the surface. “The deep ocean has been steadily dismantling the once-great cruise liner,” Popular Science reported in July 2004. One forensic archaeologist described the decay as unstoppable: “The Titanic is becoming something that belongs to biology.” The hulking wreck had become a magnet for sea life, with iron-eating bacteria burrowing into its cracks and turning some 400 pounds of iron a day into fine, eggshell-delicate “rusticles”, which hung pendulously from the steel sections of the wreck and dissolved into particles at the slightest touch. Molluscs and other underwater critters chomped away at the ship, while eddies and other underwater flows have broken bits off the wreck, dispersing them back into the ocean.

A century after the Titanic sunk in 1912, over 140 people had visited the landmark many believe should have been left completely alone. Some have had government or nonprofit backing; others have simply been wealthy tourists of the sort who accompanied Leibowitz and Miller to their underwater wedding. With its centenary, the ship finally became eligible for UNESCO protection, under the 2001 UNESCO Convention on the Protection of Underwater Cultural Heritage. Then-Director General Irina Bokova announced the protection of the site, limiting the destruction, pillage, sale and dispersion of objects found among its vestiges. Human remains would be treated with new dignity, the organization announced, while exploration attempts subject to ethical and scientific scrutiny. “We do not tolerate the plundering of cultural sites on land, and the same should be true for our sunken heritage,” Bokova said, calling on divers not to dump equipment or commemorative plaques on the Titanic site.

The legal protections now in place on the Titanic wreck may have been hard won, but they’re bittersweet in their ineffectiveness. The Titanic has been protected from excavation, but it’s defenseless against biology. Scientists now believe that within just a few decades, the ship will be all but gone, begging the question of precisely what the purpose of these statutes is.

In its present location, protections or no, Titanic’s destruction seems assured. It’s likely, but not certain, that moving the ship would damage it, yet keeping it in place makes its erosion a certainty. A few days after the wreck was found in 1985, competing explorer and Texan oilman Jack Grimm announced his own plans to salvage the ship, rather than let it be absorbed by the ocean floor. “What possible harm can that do to this mass of twisted steel?” he wondered. Grimm, and many others, may have been prevented from salvaging the site for its own protection—but simply leaving it alone has doomed it to disappear.

*Correction: We originally said that Reagan signed the Act into law in 1996. That’s clearly not possible.

It may still be safe to drink.
shipwrecks

Found: Roman Shipwrecks Off the Greek Island of Naxos

Amphoras and anchors at a popular stop on east-west trade routes.
disasters

After decades of searching, the site where 400 lost their lives has been identified.
Video