What Candy Can Teach Us About the Origin of Mysterious Stone Forests - Atlas Obscura
Want to see fewer ads? Become a Member. 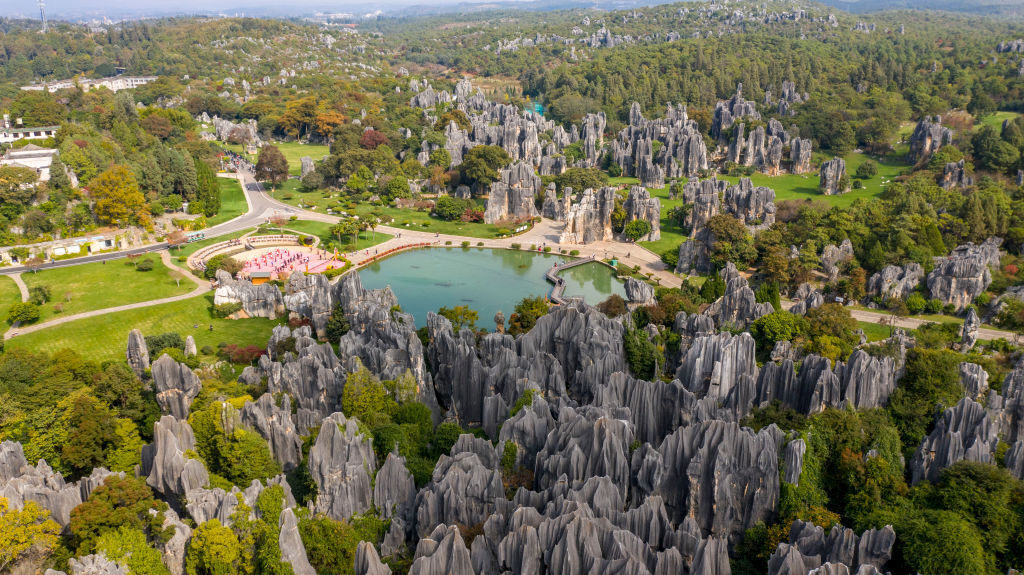 The Shilin scenic zone in Yunnan Province is a popular destination for tourists. Jiang Wenyao/Xinhua via Getty Images
In This Story
Place

After refusing to marry the son of a local chieftain, a young woman named Ashima was kidnapped by her spurned suitor and carried into the wilderness. Her true love, Ahei, saved the day by defeating the abductor in a three-day singing match, but on the ride back to their village, Ashima drowned in a flood. This, according to Chinese lore, is the origin of the iconic Shilin Stone Forest’s Ashima Stone, a monolithic rock formation that resembles a kerchiefed woman carrying a bamboo basket.

Otherworldly rock formations like this, known as “stone forests,” can also be found in Madagascar and Russia, but the process that gives some of them distinctly spiked tips, such as Ashima’s, has eluded simple explanation. “We know [the forests] generally form from the dissolution of bedrock,” says Christopher Groves, a hydrogeologist at the University of Western Kansas, “but what’s not clearly known to a high level of detail is why these different shapes happen.” A team of mathematicians and students from New York University (NYU), armed with hard candy and water, think they have a sweet, sticky answer to that nagging question.

“Everybody else in the department is doing good wholesome calculations and pen and paper work,” says Leif Ristrophhead of NYU’s Courant Institute of Mathematical Sciences, “and we do that too, but we also have a wet lab.”

It was while studying fluid dynamics in the wet lab that Ristroph’s team made a surprising discovery. “We’d been playing with hard candy for years,” he says, explaining that because it is a porous, amorphous solid, it makes for a good “mock-rock.” “What we found was that when you take a cylinder of candy and leave it in water, after an hour or so it will have dissolved itself into a super sharp spike.” With a tip measuring in at 10 microns wide—one-tenth the width of a human hair—”sharp” may be an understatement. “The grad student who’s the first author on the paper, Jinzi Mac Huang, cut himself the first time we did these experiments,” he adds, “so that got our attention.”

They came to understand that as the water surrounding the candy grows heavy with dissolved sugar and sinks to the bottom of the tank, it creates a steady flow of water from the tip to the base, which over time forms a point so fine that it can’t be seen with the naked eye, or without the assistance of food-coloring. “We liked blues and greens,” says Ristroph.

“When we saw these spikes forming so reliably in our experiments,” says Ristroph, “we realized it’s got to show up somewhere in nature.” So they crossed departmental lines, and after some geological brainstorming, Huang, who is originally from China, made the connection to the Shilin Stone Forest.

Imagine that these stone forests began as an irregular formation of porous rock at the bottom of an ancient lake or sea. As the water dissolved the stone away, it created a flow down the sides of prominent areas, like the one Ristroph and his students observed in the lab. Over millennia, the stone continued to weather to form the jagged pinnacles, and once the water receded or the land rose, they stood tall. “As far as I’m aware,” says Groves, who specializes in karst geology, “this is the first time this level of focus has been applied to stone forests.”

Ristroph imagines this accidental find may have implications beyond demystifying wondrous geological anomalies. Producing a super-sharp needle, for example, could aid in the manufacturing of micropipettes and other instruments that feature pointed, hollow ends. “We can get this to engineers who can really determine if these things can be useful or not,” says Ristroph. “No one’s ever accused math and physics types of being too useful on their own.”

Join us for a daily celebration of the world’s most wondrous, unexpected, even strange places.
volcanoes

Researchers braved storms and monstrous underwater mountains to learn why one region’s earth-shaking is so peculiar.
space exploration

It Turns Out You Can Detect an Earthquake From a Balloon

From bright red grass to stranded shipwrecks, these beaches are anything but ordinary.
Video • PinDrop

4:51
Want to see fewer ads? Become a Member.
From Around the Web
Atlas Obscura Trips
Springtime in Eastern China: Exploring the Birthplace of Tea
View This Trip
Thanks for sharing!