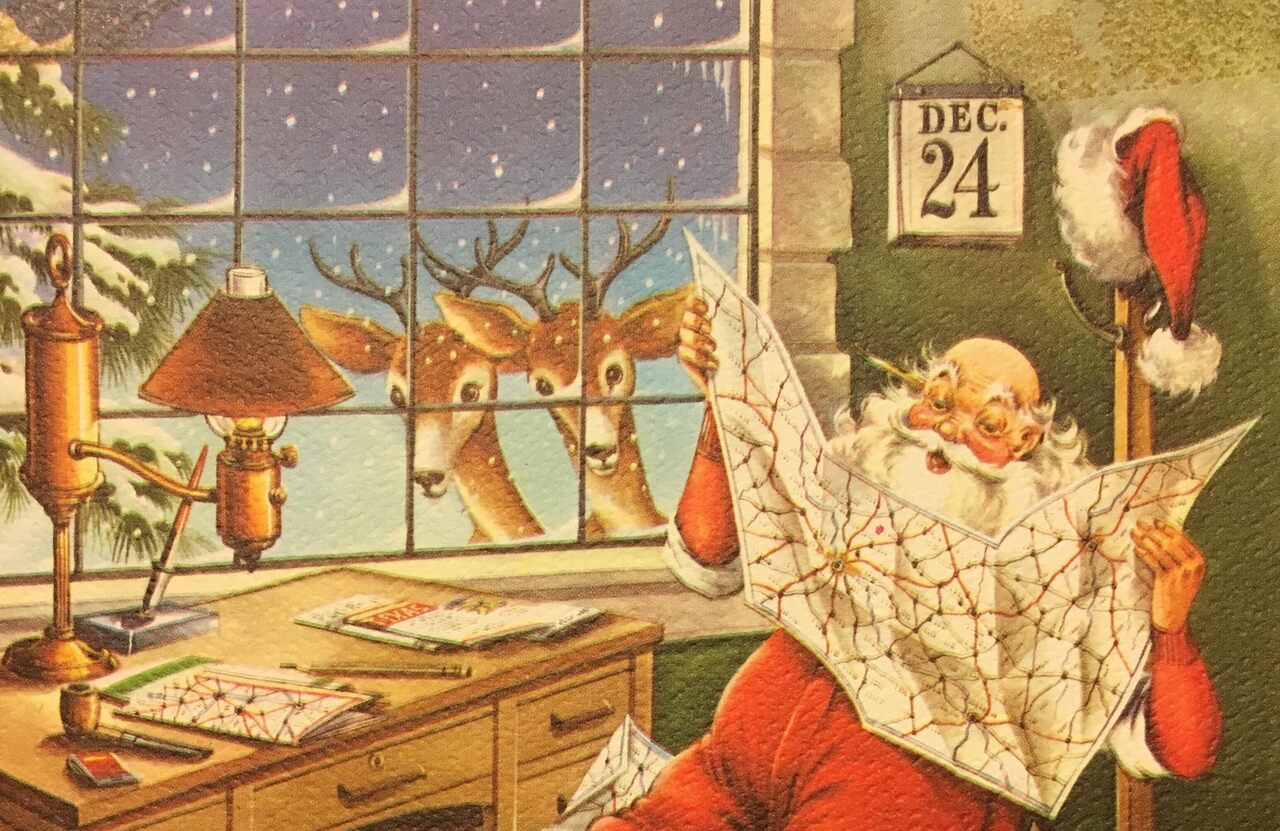 One of the last few places in Manhattan that employed a pneumatic systemic keeps it on display.

The current librarians in the New York Public Library’s maps division don’t know much about their motley stash of Christmas cards. They just inherited a trove of them—enough to fill six boxes—many of which are still unprocessed, meaning they haven’t been assigned records or detailed descriptions. Some are duplicates and about three-quarters are blank. But all of them are merry.

The cartographic season’s greetings fall under the umbrella of what they call “cartifacts”—ephemera imbued with the essence of maps. Over the years, the library has accumulated a slew of this stuff: beach balls, neckerchiefs, pencil sharpeners, and magnets. Former curators seem to have had a soft spot for the holiday cards, says Kate Cordes, the library’s assistant director of maps, local history, and genealogy. Her hunch is that most came to the library between the 1970s and ’90s. Some are addressed to former staff members, perhaps as a gesture of goodwill from colleagues or a bit of outreach from mapmakers looking to make a future sale.

Visually the cards fall into a few broad categories, such as Santa plotting his route or pictorial maps of fantastical festive places. (Greetings from Toddysboro, Wreathsville, and Giftport.) “A whole lot of them are boring,” Cordes says, including bland facsimiles or generic, ’70s-era examples featuring kids hamming it up next to maps. But some cards depict motifs that are reflections of their time. One from the ’60s shows Santa jetting off to deliver presents on a rocket, a nod to an age captivated by Sputnik, the Moon landing, and the space race. Another batch, spanning the late ’60s through the ’80s, testifies to swelling interest in globalization. In these, wreaths encircle globes, greetings come in multiple languages, and a genial handshake bridges continents.

There isn’t necessarily much to learn from studying the collection, and the current curators aren’t actively pursuing new additions. “I’m a big fan of research value, and they have modest research value,” Cordes says. Fair enough. But these cards have plenty of cheer to spread around. Atlas Obscura has a selection.

Can an Anonymous Buyer Save a German Village on Its Last Legs?

For the tiny hamlet of Alwine, one bid stands between it and ruin.
cardssanta clauspostalmap mondaychristmasholidaysmapslibraries

It's not going to fit in a scanner.
libraries

School is in session for gladiators, dead bodies, and Santas.
holiday

Lismore's festive trees are made out of glorious garbage.
holidays

3:50
Want to see fewer ads? Become a Member.
From Around the Web
Travel With Atlas Obscura
Are you a curious traveler?
Join local experts in 50+ destinations for a once-in-a-lifetime journey.
View Our Trips
Thanks for sharing!