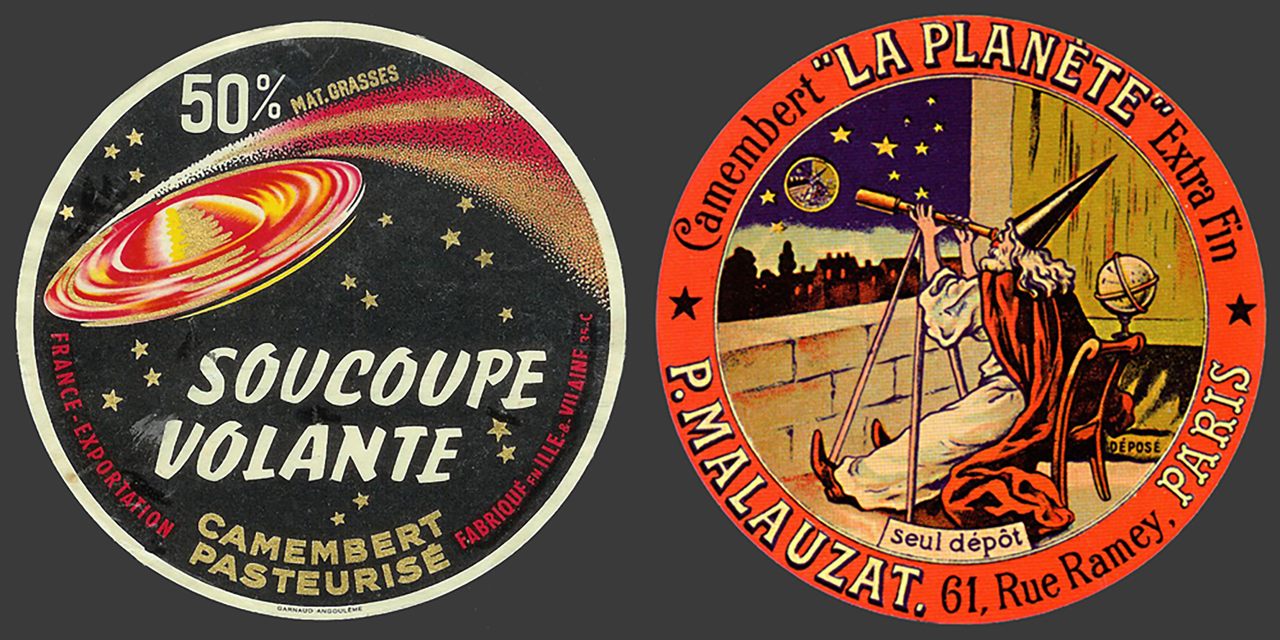 Tyrosemiophilia is a mouthful to pronounce. Breaking it down, the meaning is still murky: in ancient Greek, tyro means cheese, semio is sign or label, and philos is love. The term does not refer to savoring rich, creamy cheese. Rather, it defines a surprisingly popular hobby: collecting the cheese labels that have been affixed to French Camembert’s round wooden boxes for over 100 years.

Each label is a miniature work of art. Themes run the gamut, from animals, flowers, historical personages and events to attractive milkmaids in local costumes. Club Tyrosémiophile de France (CTF), established in 1960, holds yearly conferences where members can trade labels and share the stories behind the cheesemakers and artists who created them. Club members receive a yearly membership card sporting a special cheese label, as well as quarterly magazines on all things label-related.

The club now boasts a collection of several million labels. It recently moved its headquarters to the Camembert Museum in Vimoutiers, Normandy, and plans to digitize its collection of labels so that museum visitors can view them on a screen and print out the ones they like.

One avid collector is Serge Schéhadé, a retired stockbroker who lives in Paris. His collection began innocently enough. In the 1980s, he visited a Sunday flea market in Normandy. “I bought 10 or 15 Camembert labels,” he recalls, “only to stick them in a drawer. But somehow they called to me.” And although he had never collected anything before, he felt drawn to acquiring more.

Schéhadé specializes in historical labels, which he defines as lithographed works from before 1960 or 1970. “More modern labels that are made on printing presses include unsightly bar codes,” he says. “They lack the artistry of the lithographed models that were etched on engraving stones, with each color added one by one.” He currently has about 35,000 labels, organized into 200 albums.

While other collectors have many more labels (some have amassed more than 150,000 distinct labels, about half of the 300,000 varieties that were ever produced) Schéhadé’s personal website is still an exhaustive, meticulously organized compendium of the history of cheese labels, detailing the background of many dairies which are no longer in existence.

As the current president of CTF, Schéhadé notes that the club had over 2,000 members in the 1980s. But as members aged, the club shrank. Now there are only a few hundred members, many in their 70s. Yet Schéhadé is eager to attract younger collectors and encourages current members to bring their children and relatives to meetings, where they will be given some labels to—hopefully—get them hooked. School groups are also invited to visit the collection housed in the Camembert Museum, where staff members plan to hand out labels to the students, along with samples of cheese.

Camembert was invented in 1791, in the green pastures of Normandy in Northern France. Because of its soft, runny consistency, it was eventually packaged in little wooden boxes and affixed with the label of the dairy that produced it. But their colorful coverings came much later. The artistic cheese labels, called étiquettes in French, first showed up about 1910 and were meant to attract children, Schéhadé explains. “Back then there was no TV or internet, so the cheesemakers produced these labels, hoping to interest children in soaking the wood boxes to detach the labels and collecting them. It worked.”

“But the crowning era was World War I,” he notes. Camembert’s popularity grew thanks to the patriotism of its producers, when many dairies donated their cheese to soldiers as part of their daily rations. When the soldiers returned home, they brought with them a love of Camembert.

As long as there have been cheese labels, there have been generations of devoted French collectors. A 1975 newspaper article quotes Jean Guy, the vice-president of CTF at the time and the owner of 25,000 labels, who commented on the competitiveness among serious collectors who jealously guarded their sources in order to have the only example of a certain label.

A 1987 magazine article on “eccentric retirees” featured Bernard Clouet and his collection of 10,000 cheese labels. He confided that one of his favorite places to find them was at picnic areas along the autoroutes that span the country. It seems that after lunch breaks of bread and cheese, picnickers left behind the boxes with their labels, which Clouet said he would carefully gather while wearing gloves.

This devotion is not out of character for cheese-label lovers. “I can’t stop collecting these beautiful pictures of the past,” says Schéhadé. “It’s more than a hobby, it’s a passion.” He admits that he never told his brokerage clients or colleagues about his collection, because he worried that they wouldn’t take him seriously anymore.

When asked about his motivation, Schéhadé provides a French word that does not have a simple English translation: patrimoine. The term contains a complex web of meanings which include heritage, tradition, cultural inheritance, and the bonds formed between generations.

Since his recent retirement, Schéhadé now has the time to check eBay and other websites daily for new finds. “I like to know the stories behind the labels,” he says. The names of the artists and the histories of the dairies paint a vibrant picture of the past, although they hint at a bleaker future. “Now that 99 percent of French cheese is made industrially, using pasteurized milk, there are only a few French cheese makers, and only in Normandy, who still make Camembert by hand using raw milk,” he says.

Although he bemoans the fact that France’s youth grew up eating industrialized cheese, he has not given up hope. Reaching out to younger generations is one way he hopes to drum up interest in Camembert’s lovely labels, and he’s eager to connect with collectors in other countries. All, he says, are welcome to join CTF. “French patrimoine is precious,” he says. “But if no one takes care of it, it will disappear.”

Join us for a daily celebration of the world’s most wondrous, unexpected, even strange places.
mountains

Why Did the U.S. Government Amass More Than a Billion Pounds of Cheese?

On Marajó, the buffaloes outnumber people.
Video • Wonder From Home