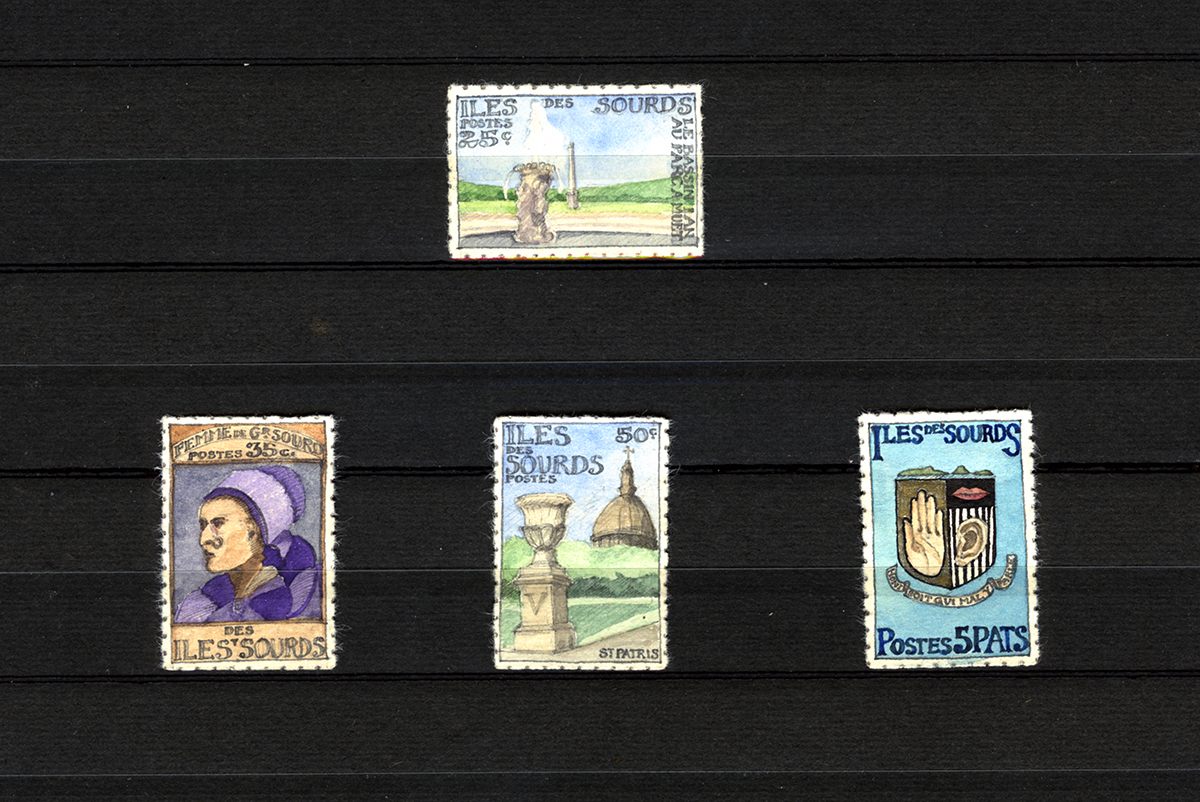 The stamps issued in the tropical archipelago of Amis and Amants show a series of arcane islands in miniature watercolors. The sea sweeps the empty beaches of Outburst of Tenderness. Palm trees wave beneath stormy skies on the isle of First Love. From the shores of Fair Weather Friend a distant volcanic peak is visible on the horizon. On the island of Hand-in-Hand, mountains slope down to neatly ploughed fields.

These are Cinderella stamps; artifacts that look like stamps but aren’t. These islands of love and friendship don’t exist. They were painted by the American artist Donald Evans, who made thousands of stamps for 42 imaginary countries over a short, bright career, before his death in a house fire in 1977 at the age of 33.

Cinderella stamps can be anything from propaganda messages or charity labels to local stamps for obscure islands and tiny towns. You can’t send a letter through the official post with a Cinderella because they have no legal value, but that’s the attraction. It means anyone can make them, and the only restriction on what you can put on them is the stamp-maker’s imagination. Donald Evans was the king of the artistamp, a form of Cinderella made as an artistic work.

Artist Ginny Lloyd has been making artistamps under the pseudonym Gina Lotta since 1975. “An artistamp is a little museum,” she says. “You create an exhibit within a sheet of stamps. There’s complete freedom in what you want the content to be. They can have a political message, commemorate events from your life, whatever you want. I make sheets of stamps for people I know who’ve died. Some artists make them to distribute their work outside of the gallery system. Others mimic real stamps as a political commentary; some have had the Secret Service visit them for counterfeiting. Artistamps subvert in a quiet way. You have to look closely to see if they’re real or not.”

As a kid Donald Evans built cities from cardboard, complete with houses and highways, churches and traffic. To make his imaginary worlds more real he wrote letters from them and made stamps to put on the envelopes. In the 1950s, between the ages of 10 and 15, he made hundreds of stamps, recording them in detail in his Catalogue of the World. He abandoned his hobby as a teenager, returning to it as an artist only once the cultural landscape had been transformed by Pop Art. (If it was okay to paint soup cans and comic strips, maybe it was okay to paint fake stamps.) Donald Evans dug out his childhood catalogues and began making stamps again.

He created countries to mark elements of his own life. Anything could be transformed into geography: a meal; a game of dominoes; a dance; a dinner party; a surname; a pair of shoes, a friendship, a love affair. His stamp issues minutely explored bird’s eggs, Chinese plates, Indonesian vegetables, alphabets, penguins, pasta, mushrooms, windmills, quilts, chairs and shells. To make his stamps look real he carved erasers to make postmarks and mounted his work on envelopes he distressed and addressed.

He kept the details of the lands he thought up deliberately and tantalizingly vague. He wanted viewers to step through these tiny doorways into worlds of their own imagination. These were vast territories, large enough to encompass all interpretations.

For other artistamp makers the form has been a way of making more political points. Unlike mass-produced official stamps, Cinderellas are hyper-local, often reflecting the personal preoccupations of the artist. Stamps traditionally commemorate the proud moments of a country, but Cinderellas can subvert that, marking the shameful or the perverse.

Artist Karl Schwesig drew faux stamps while imprisoned in 1940 at the Gurs concentration camp in southern France. He drew what he saw around him; the barbed wire, the guards; the bodies, the coffins heading for the burial ground. In the 1960s the Fluxus experimental art movement started using used stamps and mail art as a form of ‘living art’, a collaborative, anti-commercial medium that they sent out into the world instead of displaying in a gallery. Canadian conceptual artist Anna Banana, whose work satirises authority by parodying its symbols and concepts using the humble, humorous and nonsensical banana, produced a series of banana-themed stamps. Russian artist Natalie Lamanova has used stamps to explore issues of identity, ownership and control in 1990s post-Soviet Russia. American mail artist Otto David Sherman has been making stamps since the 1970s that highlight the disparity between the way nations represent themselves in official imagery and the actual actions of their rulers, depicting corrupt politicians and despots and showing first-world leaders in farcical poses; Vladimir Putin in a top hat, Donald Trump juxtaposed with a chimpanzee.

The artistamp community today is a DIY culture of makers swapping stamps through the post, mixing up drawing with image-editing software, color printing with pinking shears, internet forums with the traditional mail network. For a new generation it’s retaliation against the global with the super-local, against the mass-produced with the slow-made.

Mail art creator Vittore Baroni has said that “Artistamps rebel against the monopoly of governmental emissions, claiming the right for everyone to self-produce and issue virtual values in any possible shape, number and subject.”

The countries Donald Evans created were peaceful, their politics idealized. The Island of the Deaf is a silent paradise with a capital called Hand-Talk. The country of Stein with its capital Gertrude is a literary dictatorship with 100 percent literacy. The imperial kingdom of Caluda emerges from a native takeover as the new independent state of Katibo, the Sudanese dialect word for a black man who sets himself free. He told the Paris Review in 1975 that his stamps were a “vicarious traveling for me to a made-up world that I like better than the one I’m in. No catastrophes occur. There are no generals or battles or warplanes on my stamps. The countries are innocent, peaceful, composed.”

Ginny Lloyd sees in the artistamp an echo of a childhood fascination with unknown worlds. “The excitement I feel when I receive artistamps in the post is the same excitement I used to feel as a child when I would get packages of loose stamps for my collection. I would spend hours looking at all of these beautiful places outside of my very small town, dreaming about travel. I wanted to know more about other worlds and this was one of the ways I learned.”

The art of Donald Evans was subject to a raft of self-imposed restrictions. He only painted stamps, always in the same sizes with frequently recurring themes, in washed out colors painted with the same brush. He used this sameness, this deliberate smallness, to explore the infinite. His stamps are pieces of physical evidence sent directly from the limitless landscape of the imagination.

They look kind of fun.
stampsmailfeaturesart

Years of political unrest have halted tourism in the Malian city, so local guides are bringing Timbuktu to the world—through the mail.
art

All you need is an idea, an envelope, and a stamp.
murals

Painted during the Great Depression, they're lingering expressions of civic pride.
libraries

A new catalogue attempts to figure out what we're telling the rest of the universe about ourselves.
Video