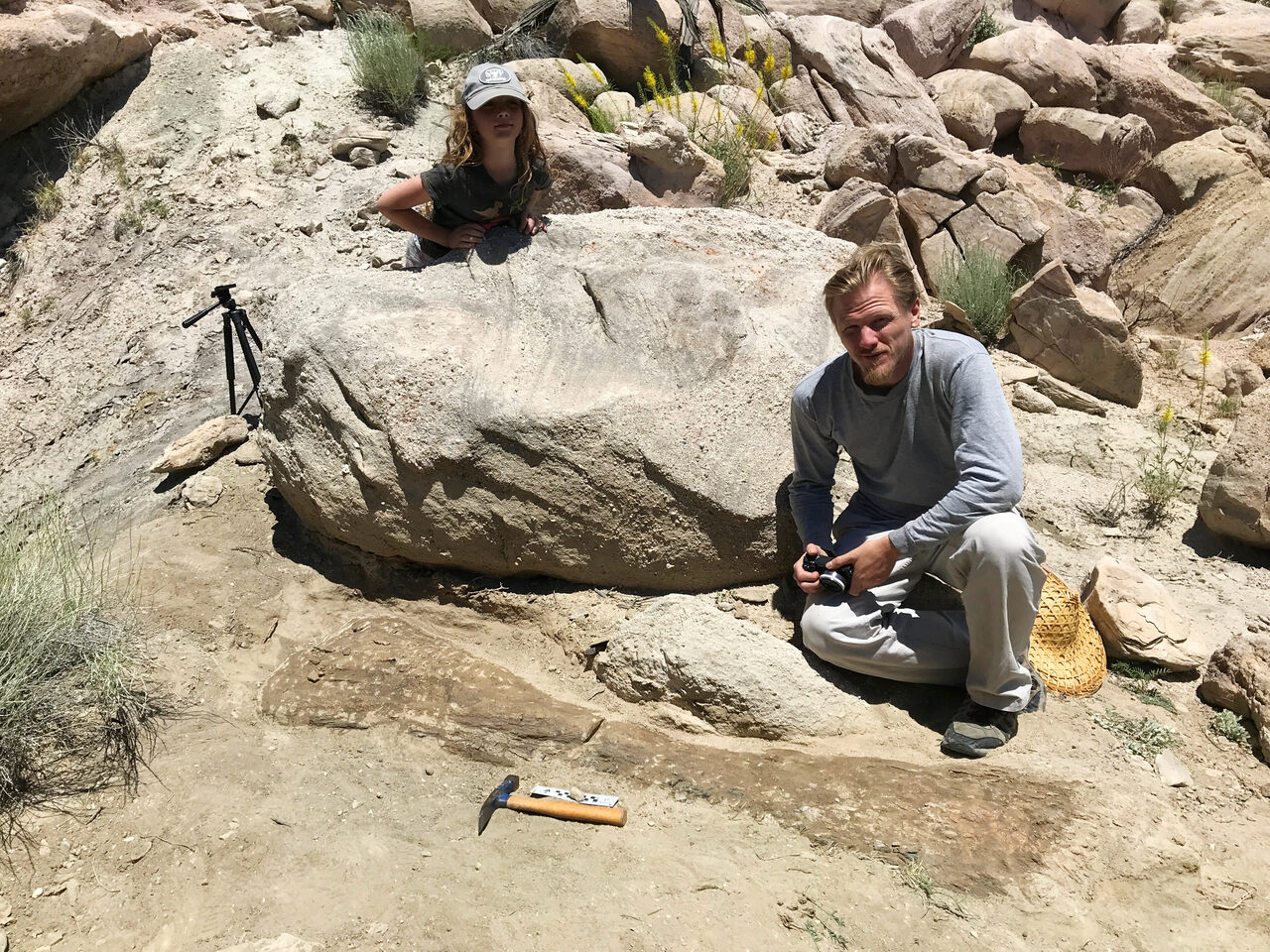 Ruby Foster and Brian Engh with the humerus in June, before it was excavated. Matt Wedel
In This Story
Destination Guide

One day last May, Brian Engh was trying to spot dinosaur bones along a rock ledge in the Morrison Formation, a famed fossil site in the western United States, when he noticed something strange at his feet. It was the faint outline of what appeared to be a limb bone, and it was more than six feet long. Engh, a paleoartist who was there to observe dinosaur fossils in the field, couldn’t believe his eyes. “It was just way too big,” he writes in an email. The bone looked bigger than any bone he’d ever seen. So Engh hollered to his colleague Matt Wedel, an anatomist and paleontologist at the Western University of Health Sciences, who was studying fossilized poop nearby. Wedel came over and knew that a bone that big could only have come from one thing: Brachiosaurus, a gigantic, rare sauropod that lived in the Late Jurassic.

Engh, Wedel, and paleontologist Thuat Tran had discovered the dinosaur’s right humerus. “It was an exciting discovery but also a daunting one,” Engh says. “In part because finding any bones from Brachiosaurus is so rare, and in part because this one was perched on the edge of a gulch.” They returned in October to excavate the fossil, hauling the 1,020-pound bone out of a remote ravine with the help of two local Clydesdale horses, Darla and Molly. The fossil will soon go on display at the Utah Field House of Natural History State Park Museum in Vernal, Utah. “I’ve been working in the Morrison Formation for 10 years, and I never anticipated we would dig up a Brachiosaurus,” says ReBecca Hunt-Foster, the park paleontologist for Dinosaur National Monument, who was involved in the excavation. “I never even thought we’d see one.”

The Morrison Formation is somewhere between 147 and 156 million years old. The vast majority of the dinosaurs excavated there come from the Morrison’s ashy upper layers, called the Brushy Basin Member. The first Brachiosaurus fossil, a partial skeleton, was discovered in 1900 in the Brushy Basin near Fruita, Colorado; no one has found a humerus since the 1950s. “It’s a rare element in a rare type of skeleton,” Foster says.

There are only 10 confirmed Brachiosaurus fossils in the world, none of which are complete. By comparison, the Morrison Formation has produced more than 200 fossils of Camarasaurus and more than 100 fossils of Diplodocus, Apatosaurus, and Brontosaurus, all of which were big, long-necked plant-eaters that lived in the same era, Foster says. “We don’t really know why that is,” says John Foster, the curator of collections at the Utah Field House and an expert on the formation. It could be that Brachiosauruses lived farther away and their bodies washed into the area, or that they occupied environments ill-suited to preserving bone. But despite their rarity, Brachiosaurus is pretty famous, for a dinosaur: It even appeared in the 1993 film Jurassic Park.

Engh’s group was focused on an older, less-studied section of the Morrison called the Salt Wash Member. Here, dinosaur bones are usually easy to spot. Over millions of years, the porous bones have soaked up heavy metals such as iron and uranium from the surrounding sandstone, turning them dark purple or brownish-red, Engh says. Paleontologists have always known the Salt Wash has much fossilized material as the Brushy Basin, but its landscape is much harder to access. “It’s much tougher terrain, an alternating series of hard sandstone benches and juniper and pinyon trees,” Foster says. The most visible fossils in the Salt Wash poke out of the exposed rock of cliff faces, which can be high-up and impossible to access for excavation. “The best you might get is a cross-section of a bone,” Foster says.

Fortunately, the Brachiosaurus humerus was on the ground, lying in what looked like loose dirt. After Engh and Wedel found it in May, they covered the bone up with some soil and brush, just in case another prospector came by and poached it. But they knew they had to remove the humerus before the winter, when freezing and thawing could splinter the bone to pieces. They returned with Foster in June, to begin excavation and figure out how to move the enormous bone.

Foster had come with his whole family: his wife, Hunt-Foster, and his kids, Ruby and Harrison. Luckily, nine-year-old Ruby had an idea. “She always wants to find a way to involve horses in everything,” Hunt-Foster says. The suggestion sounded like a joke, but it actually made sense. They didn’t have the money or the time to lift the bone out with a helicopter, and trying to lug it with people alone seemed a Sisyphian task. Foster turned to his museum’s gift shop manager, whose cousin had a pair of Clydesdale horses that love to pull heavy things.

In October, armed with all the right permits and the horses Molly and Darla, the paleontologists were ready to move the bone. “It reminded me of Oceans Eleven,” Foster says. “Everybody had their specialty. We had a rope guy. We had the horse people.” They cocooned the fossil in strips of burlap dipped in plaster of Paris, to prevent any unwanted dents, and rolled it onto a utility trailer that was hitched to Molly and Darla. The trickiest part was maneuvering the bone out of the ravine: The group had to rig a winch and pulley so that the horses could drag the bone to a stable, higher ledge. The kids on site ran back and forth between the bone and the horses to shout commands. “It was a game of telephone, telling us when to pull and when to stop,” Foster says. “It was quite the operation.”

After several hours, right as the sun began to set, Molly and Darla finally pulled the bone out of the ravine and onto flat ground. They dragged it the last half-mile in a few minutes. “It was deeply satisfying to use two very large animals to pull out a piece of a truly titanic animal,” Wedel wrote on his blog. Engh is working on a documentary about the discovery, the first part of which can be viewed here. Though the bone has yet to go on official display at the Utah Field House, visitors can see it being prepared behind a window in the lobby. For more intrepid dinosaur fans, Engh recommends going straight to Dinosaur National Monument to see heaps of fossils that are partially exposed in the rock. These dinosaurs aren’t meant to be excavated, so don’t bother bringing your Clydesdales.

Of course, they are deep underground and came from 75-ton titanosaurs.
dinosaurs

Found: Possible Traces of DNA, in a Fossilized Dino Skull

This ancient hadrosaur has some microscopic secrets.
dinosaurs

The reptilian critters may not have survived, but they made sure to sign off feet first.
Video • Wonder From Home

A high-profile T. rex sale is a reminder that paleontologists get stressed when fossils vanish into private hands.
Read more
Thanks for sharing!