We're Finally Getting a Picture of How Dangerous PPE Is for Wildlife - Atlas Obscura
Want to see fewer ads? Become a Member. 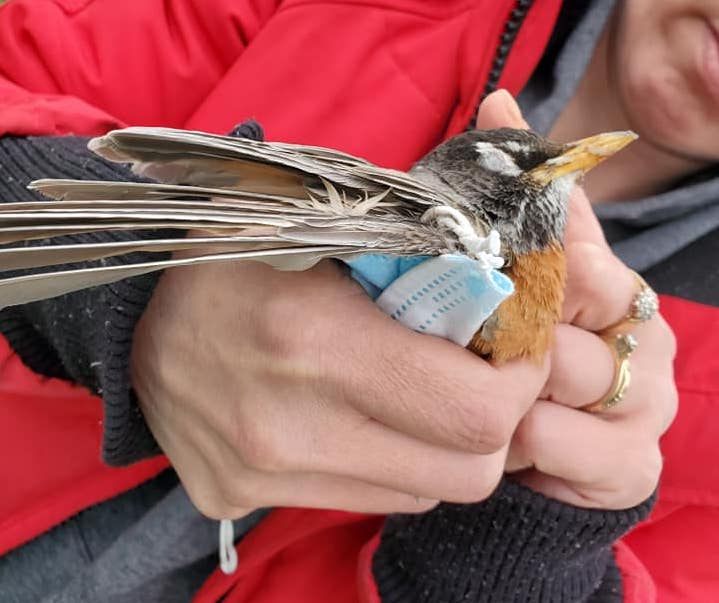 This robin was tangled in a disposable face mask. Courtesy Sandra Denisuk
In This Story
Destination Guide

The latex glove was a streaky, dirty, yellow-gray, the color of a plastic bag that somersaulted into a tree and got tangled in the branches. When citizen scientists in the Netherlands spotted it in August 2020 while collecting trash along Leiden’s Oude Vest canal, they noticed something unsettling. The glove was torn, and wedged inside a gash beneath the thumb, they saw a tail. It was fringed and a bit rufous, and belonged to a creature that swam in and never found its way out.

That unfortunate fish—a European perch, Perca fluviatilis—is one of many animals that recently found themselves at the mercy of the wave of pandemic-related disposables. Humans have now been living alongside COVID-19 for more than a year—and that means other animals have, too. For months, scientists have suspected that animals are affected by the disposable masks, plastic gloves, and other personal protective equipment (PPE) that people lost or discarded around parks, waterways, and other public spaces. Now researchers have pulled together observations from several countries to see how creatures are grappling with our castoffs.

The Ocean Conservancy, a Washington, D.C.–based environmental nonprofit, regularly hosts the International Coastal Cleanup, a blitz of trash-picking events around the world. Last July, the organization added “PPE” as a category of trash that participants could log in an app. The Ocean Conservancy followed up with a survey in early 2021, and found that 94 percent of respondents had observed PPE pollution at cleanup events the previous year. (In all, volunteers hauled in nearly 107,220 pieces of PPE—largely masks and gloves—across 70 countries.) Most of this trash was found on sand, grass, or sidewalks, but more than a third of participants reported PPE in oceans or other bodies of water. Just over half of the respondents also noted that they saw rogue pieces of PPE in their home communities every day.

Since PPE was a newly introduced category, there’s no perfect way to evaluate how these numbers compare to previous years’ findings. But the report’s authors suggest that this variety of trash would have been captured by counts in other categories, such as “Personal Hygiene” or the catchall “Other Trash.” (That’s the umbrella that covered it until the middle of 2020, too.) The authors pinpoint PPE as the reason that personal hygiene–type litter was three times more prevalent in the period they measured in 2020, versus the same period over the past three years.

With ecosystems across the world more flooded with more PPE than ever before, other researchers are tracking how animals are reacting to it. A recent paper in Animal Biology, the journal of the Royal Dutch Zoological Society, offers a snapshot.

For that research, a team of scientists in the Netherlands, led by biologists Auke-Florian Hiemstra and Liselotte Rambonnet of the Naturalis Biodiversity Center and Institute of Biology at Leiden University, trawled Google, Facebook, Twitter, and Instagram for images and posts tagged with some combination of words such as “litter,” “COVID,” “face mask,” “PPE,” “entangled,” “entrapment,” “bird nest,” and more. The paper identified 28 sightings, many of which were reported by rescue centers or veterinarians. The team also maintains a website that invites anyone around the world to report sightings of animals snared in or ingesting PPE.

The team found animals relating to our pandemic garbage in several ways. Birds wove the trash into their nests: Common coots in the Netherlands incorporated a face mask and a latex glove, a product that also padded the digs of some sparrows in Warsaw, Poland. More troublingly, other animals confused the detritus with dinner. In September, a Magellanic penguin in Brazil was found to have eaten a face mask. The next month, someone from Malaysia described a long-tailed macaque chewing on one. Still other creatures got stuck. A bat and a hedgehog in the Netherlands found themselves tangled in masks. In February, someone reported one wrapped around a herring gull in Canada. In March, someone in the Philippines saw one of the face coverings strangling coral.

The picture is gloomy, and it’s still incomplete. That’s partly a geographic issue. Because the pandemic has pummeled so many countries, “There must be cases everywhere around the world,” Hiemstra and Rambonnet write in an email, but the researchers only cast around for mentions in Dutch and English. “We now have found, for example, quite a lot of examples from the Netherlands, yet our country is really small,” they add. “There thus must be much more.” Since their paper came out, they’ve noticed an increase in reports through their website, and they’re confident that more documented sightings will make the global picture clearer.

The other problem is that some encounters between animals and PPE are quite difficult to observe. “It makes sense that birds are being reported—they’re conspicuous, and you have a lot of people looking at them,” says Greg Pauly, a herpetologist and codirector of the Urban Nature Research Center at the Natural History Museum of Los Angeles County, who wasn’t involved in this research. Birders keep close tabs on feathered creatures, and would likely notice if one was twisted in something. It’s much harder to account for PPE that animals might be eating. “Ingestion isn’t something you can easily see, and almost no one is looking at it,” Pauly says. In the new paper, many of the ingestion cases were domestic animals, but based on rafts of evidence about the perils of marine plastics and his own recent research into pre-pandemic plastic consumption among freshwater turtles, Pauly suspects that PPE is probably fouling up the insides of many wild animals, too.

When researchers do go looking for various kinds of plastic in animals’ guts, “We’re finding it,” Pauly says—but necropsies aren’t especially common. (The specimens that Pauly’s team studied had been in the museum collection for several years before they were sliced open.) When postmortem studies are performed, they may be conducted by veterinarians whose notes don’t usually wind up in journal articles, where other scientists can see them. To complete the picture of how much PPE is really accumulating in animals’ bodies, Pauly says vets, conservation biologists, and others should perform more necropsies, or bring the animals’ bodies to museum collections, where—if there’s room—they could be held for future study.

Though vaccinations are ramping up in many countries, the pandemic is far from over. Public health advocates recommend that humans continue wearing masks to keep each other safe. To limit the toll on wildlife, we ought to reach for reusable ones, and snip the straps of any we discard, just like we do with the plastic rings that cinch six-packs. We’re still learning about the threats PPE poses to wildlife—but in the meantime, we can all avoid making the mess worse.

It may take years—even decades—to fully understand the impact of disposable masks and gloves on the environment.
science

One in Indonesia has been carrying a rubber ring since at least 2016. Here’s how the litter might be affecting the animal’s life.
pandemic

Proof the Dutch can convert nearly anything into a place to stay the night.
List