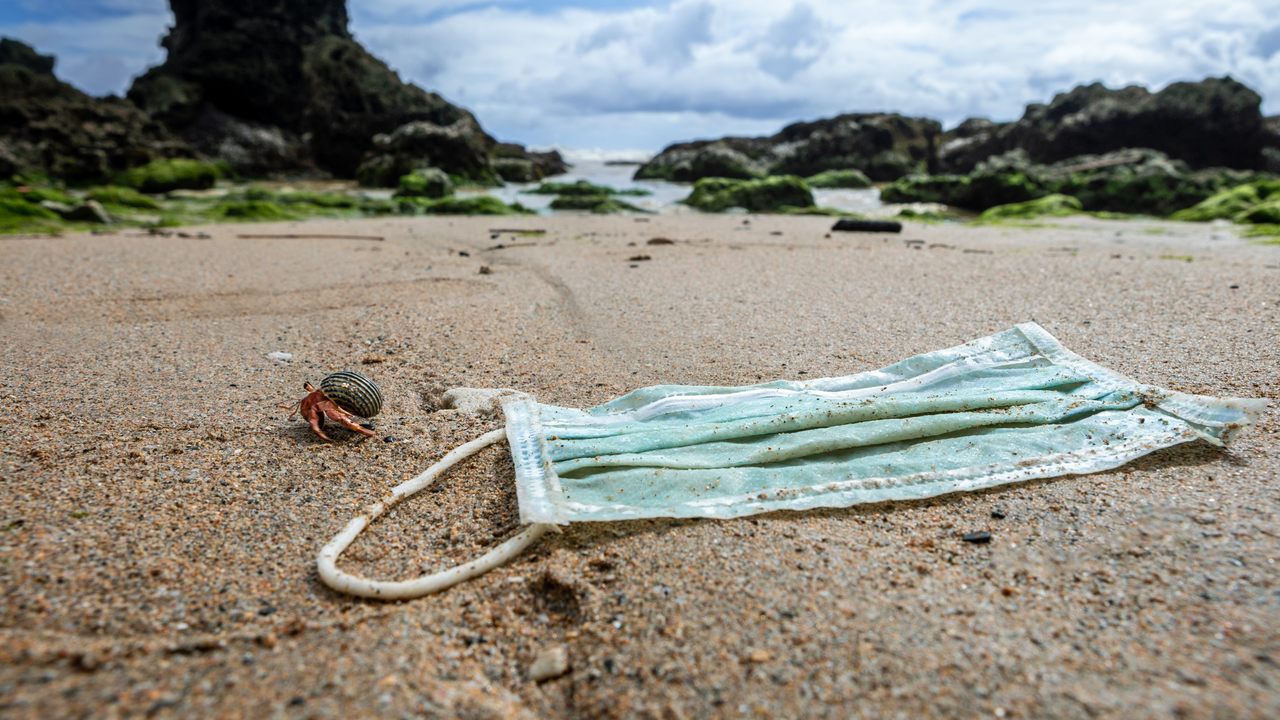 Not good at all. REC Stock Footage/Shutterstock

In October 2020, a walk through a New England park might lead you past a battalion of busy squirrels, a smattering of leaves just beginning to redden or yellow, and a trail of discarded, single-use masks. Public spaces today are littered with crumpled face coverings and tattered disposable gloves. The cast-offs look like limp, oversized confetti the morning after New Year’s. They’re leftovers of a long, agonizing affair that no one wanted to attend.

After more than six months of social-distancing protocols, millions of people continue to don personal protective equipment (PPE), including masks and gloves. There are washable varieties of both, but many people choose the convenience of disposable varieties, such as rubbery nitrile gloves and surgical masks that are often made from paper or synthetic materials such as polypropylene, a type of plastic. And though several localities are enforcing steep fines for this form of litter, many pieces of PPE can be found strewn on the ground all over the world. There—in grass, in sediment, in bodies of water—all those masks and gloves could have significant effects on wildlife, in ways that researchers don’t yet fully understand.

Bits of plastic and other synthetic materials already pose problems for ecosystems around the world. The larger castoffs ensnare corals or clog animals’ guts. The flimsy rings that corral six packs can wind up entrapping birds. The smallest fragments, known as microplastics, sail through the air, into waterways, and throughout the food web. Plastic is a human-made menace to creatures large and small. “Over the years, I’ve seen rope tangled in a buck’s antlers and even a deer getting its head trapped in one of those plastic tubs of pretzels,” says Jordan Raphael, a biologist at Fire Island National Seashore in New York.

The run on disposable masks has the potential to introduce much, much more plastic into the environment. A recent report from the University College London Plastic Waste Innovation Hub estimated that if everyone in the United Kingdom wore a single-use mask each day for a year, it would result in more than 70,000 tons of plastic waste. And as it accumulates in the environment, passersby may be resistant to clean it up, because used masks freak people out. (Ick factor aside, a person is unlikely to become infected after touching a used mask, The New York Times reported in July.) Gregory Pauly, curator of herpetology and co-director at the Urban Nature Research Center at the Natural History Museum of Los Angeles County, has noticed an increase in litter at trailheads, as well as PPE cluttering urban locations. Faced with budget cuts that have shrunk staffs, some parks have been increasingly inundated with junk that even the most civic-minded park goers may not want to retrieve. “Many outdoor enthusiasts who used to pick up litter are not doing so right now because of concerns over COVID,” Pauly says.

Anecdotally, many researchers agree that discarded PPE seems to be showing up all over the place, but it’s hard to know exactly how much is being discarded, or precisely how animals are interacting with it. “We strongly believe that the pandemic-related surge of environmental PPE litter is harming turtles,” says Adam Clause, a postdoctoral researcher at the Natural History Museum of Los Angeles County. “We just don’t have direct evidence of that yet.”

Clause is working on a multi-year collaborative study on freshwater turtles that consume human litter, including plastic. He and the rest of the team, which also includes Pauly, have already observed that plastic is terrible for turtles—and that some, unfortunately, have consumed PPE. Long before the pandemic, they found that a red-eared slider, Trachemys scripta elegans, a crimson-streaked species often sold in pet shops and then dumped in the wild, had gobbled bits of a nitrile glove. “The scientific community has also known for decades that plastic litter is often consumed by all species of sea turtles,” Clause adds. “This can lead to very harmful effects, including death.” Additional fieldwork could determine the extent of the impact, but much has been postponed or skidded to a halt. Months into the COVID-19 crisis, Clause says, many United States–based researchers are still reluctant to pursue fieldwork, because they don’t want to shoulder additional risk or pose a threat to the communities they enter.

Elsewhere, some of the fieldwork that was feasible this year is winding down for the season, which means a pause for data-gathering. “We will see next year if some of our breeding birds, such as hawks, cormorants, and egrets, are incorporating PPE into their nests when we do nesting surveys,” says Kaitlyn Parkins, senior conservation biologist at New York City Audubon. “Cormorants in particular tend to incorporate trash into their nests, so I am interested to see what we find on nest surveys next year.” Previously, Parkins has seen nests containing plastic sheeting, twine, rope, portions of Ziploc bags, and more.

Even if researchers did fan out tomorrow and start peering into nests or burrows to look for PPE, it would take a while to gather and sift through the data, Clause says: several weeks of sampling, a few more for analysis, and then at least a couple weeks or months to wrangle the results into a paper. “So you’d generally be looking at studies coming out at the beginning of next year, at the earliest,” he estimates. Pauly suspects that that useful data will come from agencies that manage stormwater runoff and organizations that hold beach cleanups, since they’ll have baseline levels of trash to compare.

Then again, there’s no need to rush things, Pauly points out: The PPE will linger in the environment for years. “It’s horrible to think about it that way, but it takes a long time to decompose,” he says. “People may be studying the impacts of PPE litter for decades.” Even so, it will be hard to prove that a particular bit of broken-down synthetic material is definitely pandemic-related, because it’s tough to follow a specific fragment through its entire life cycle.

In the meantime, humans can lessen the burden on our fellow animals by opting for reusable masks, or being cautious about how we dispose of single-use ones. “Mechanically, they create the same problem as plastic six-pack rings,” says Mason Fidino, a quantitative ecologist at Chicago’s Lincoln Park Zoo. “People should be cutting the straps before disposing.” The pandemic is sad and maddening enough without unwittingly dragging other animals into it, too.

More than a year into the pandemic, scientists are seeing the impact of disposable gloves and masks on ecosystems.
animals

Snails, Leeches, and Other Critters Are Right at Home on River Trash

Garbage doesn't belong in water, but in some of Britain's urban areas, it makes for a surprising habitat.
science

Georgina Mace helped change the way both scientists and policymakers see living things, including the most vulnerable.
Video • Wonder From Home