The Canadian Town Where Chinese Food Comes With a Side of Curling - Gastro Obscura
Want to see fewer ads? Become a Member. 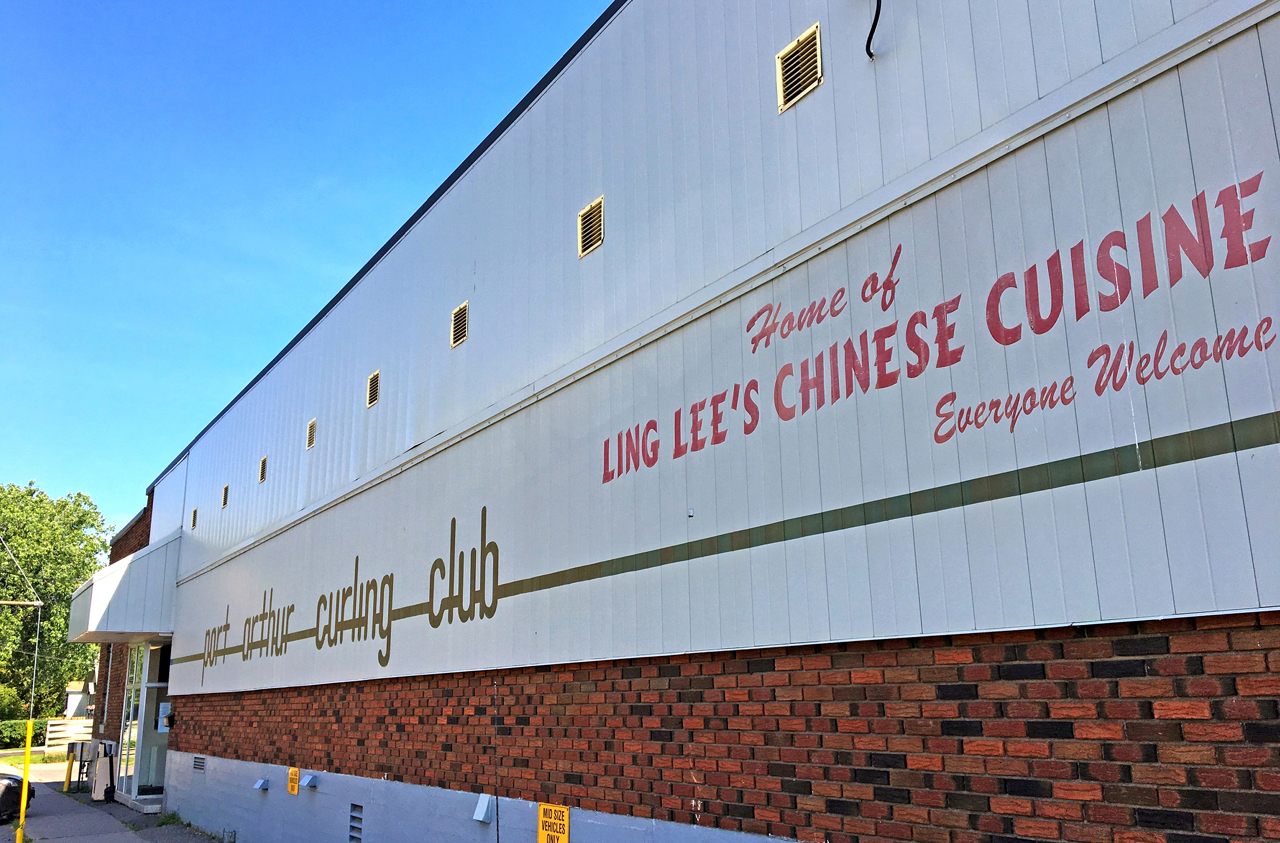 Every curling club in Thunder Bay includes a Chinese restaurant. Courtesy of Tourism Thunder Bay
In This Story
Destination Guide

This article is adapted from Chop Suey Nation: The Legion Cafe and Other Stories from Canada’s Chinese Restaurants by Ann Hui.

It was the early 1970s, and the board of directors of the Port Arthur Curling Club had a problem on their hands.

Business at the rink in Thunder Bay, Ontario, was going well. Despite competition from another curling club just a ten-minute drive away, Port Arthur had its own established group of regulars, thanks to its almost century-long history in this small city in Canada’s remote north. Plus, curling⁠—an ice sport that looks a little like lawn bowling, except that players use brooms to “sweep” a stone towards its target⁠—is arguably as central to Canadian identity as maple syrup or hockey.

One day, some of the board members stopped in at the bar at the Dragon Room, then a popular local Chinese restaurant. As usual, the place was packed—customers flocking to the dining room for the dry spareribs (“served with spice salt and lemon wedges, $1.90”) and char suee bok toy (“an authentic favorite!”).

Chinese food, by then, had become one of the most popular cuisines not only in Thunder Bay, but across North America. For many of the city’s mostly blue-collar residents, going to a “Western” restaurant didn’t make sense. They could make meatloaf or turkey sandwiches themselves at home. But Chinese restaurants were exotic⁠—never mind whether the dishes on the menu, like sweet-and-sour chicken balls or chop suey, actually originated from China. The restaurants fit with the new, more cosmopolitan worldview Canadians were beginning to develop, helped along by Nixon’s visit to China (where he famously sampled from a platter of Peking duck) and the opening of Canada’s doors to immigration from China, Europe, and other parts of the world.

Seeing the success of the Dragon Room gave the board members an idea. They approached its manager, a young man named Ling Lee, with a proposition: Would he consider taking over the restaurant at the curling club?

Lee was hardly a stranger to bold moves, his daughter, Norina Karschti, told me. At 15, her father had followed his father from Guangdong to Saskatoon, despite not knowing any English. He slowly learned the language and, a few years later, moved to Ontario on a lark. He’d been shown a photograph of a pretty young Chinese woman and was told she lived in Kenora, Ontario. So he set out looking for her. By the time he turned 19, he and the woman in the picture, May Lee, were married.

The couple settled in Thunder Bay, where he found work in Chinese restaurants. By his early thirties, Lee was managing the Dragon Room. And by the time the Port Arthur club board approached him, he was ready for a place of his own. So he said yes. In 1973, Ling Lee’s in Port Arthur Curling Club opened.

Now Karschti runs the restaurant. As she came to a pause, I asked her a question I hadn’t yet dared ask other restaurant owners. Like me, Karschti was Chinese but born in Canada. Like me, she was married to a non-Chinese husband. She too spent the majority of her time around non-Chinese Canadians. She understood what it was like to navigate between the cultures.

“Is it strange to you, selling Chinese food that you know isn’t actually Chinese?”

She paused for a moment to chuckle before continuing.

The first Chinese restaurant owners had built their businesses by improvising. Many had arrived in Canada as railway workers, or as part of the Gold Rush. They weren’t trained cooks, for the most part. And even if they wanted to cook “authentic” Chinese, most of the ingredients they needed⁠—spices, sauces, fresh produce, or seafood⁠—couldn’t yet be found in North America. Nor could they expect Chinese customers. Based on the ingredients available to them, they concocted new dishes they thought might appeal to Western audiences. They borrowed from the ideas they remembered back home, but added healthy doses of soy sauce, ketchup, and sugar to appeal to Western tastes.

As these “chop suey” dishes spread across Canada, regional specialties began to develop. There was ginger beef back in the Prairies. In Quebec, I’d found fried macaroni, stir-fried pasta with soy sauce, meat, and veggies. I’d also come across Peterborough wontons (deep-fried wonton skins, without the meat fillings), and the Northern Ontario custom of serving Chinese food with a side of toast. Then, of course, there was the island province of Newfoundland, where even egg noodles couldn’t be reliably found until relatively recently. There, chow mein is made of thin strips of green cabbage instead.

Those regional specialties, I learned, didn’t always translate from one part of the country to the next. After restaurant owner Richard Yu moved from Vancouver to Deer Lake, Newfoundland, he had to adjust his sparerib recipe. Back in Vancouver, his deep-fried, honey garlic ribs had been a hit. But when he made the same recipe in Canton, his Newfoundland restaurant, they were unimpressed. “They said, ‘Even a dog wouldn’t eat this,’” Yu says, chuckling.

It took him a while to figure out the difference: His new customers in Newfoundland were much, much older than those back in Vancouver. Newfoundland has the oldest median age in Canada. The deep-fried, crunchy ribs were hard on his new customers’ teeth. So he started braising his ribs, cooking them slowly under low heat until they were soft and tender, falling off the bone. This recipe was much more successful.

At Ling Lee’s, Karschti explains, the specialty was Bon Bon ribs⁠—a made-in-Thunder Bay invention. That dish comprised of spare-ribs coated in allspice and MSG, then deep-fried quickly and spritzed with lemon. It was one of the dishes that made her father so popular, he was eventually hired by the local cable TV station to host his own cooking show. Each week, he invited viewers into his kitchen to show them the secrets of cooking “Chinese food.”

Her father successfully became the face of chop suey cuisine in Thunder Bay. Years later, he would see the downside of that. When he decided to introduce Thunder Bay to authentic Chinese cuisine with a second restaurant, the response was lackluster.

“We tried,” Karschti said. “People just didn’t want to go for that.” Gradually, the authentic dishes dropped off the menu, and the second restaurant switched over to chop suey only.

It was nearing lunchtime, and we could hear the wok paddles banging against hot steel in the Ling Lee kitchen. The two cooks inside were busy getting the buffet ready for the lunch rush. A few regulars were already sitting at tables, watching for the lights above the buffet line to light up. Downstairs at the curling rinks, the lights came on with a sudden click. Two men in fleece vests and pants walked out onto the ice, lining up their rocks for a game.

While his dream of introducing authentic Chinese food to Thunder Bay didn’t work out, Karschti’s father left a different kind of legacy, instead. Today, all three of Thunder Bay’s curling clubs have a Chinese restaurant on the premises. And each of them has Bon Bon ribs on the menu.

From the book Chop Suey Nation: The Legion Cafe and Other Stories from Canada’s Chinese Restaurants, by Ann Hui. ©2019. Published by Douglas & McIntyre. Reprinted with permission of the publisher.

At Fletchers, cookies and bagels come with a side of food history.
food

A large immigrant community has made their cuisine popular.
gold rush

It all started with the Gold Rush.
Sponsored by Travel Nevada
Video • Wonder From Home