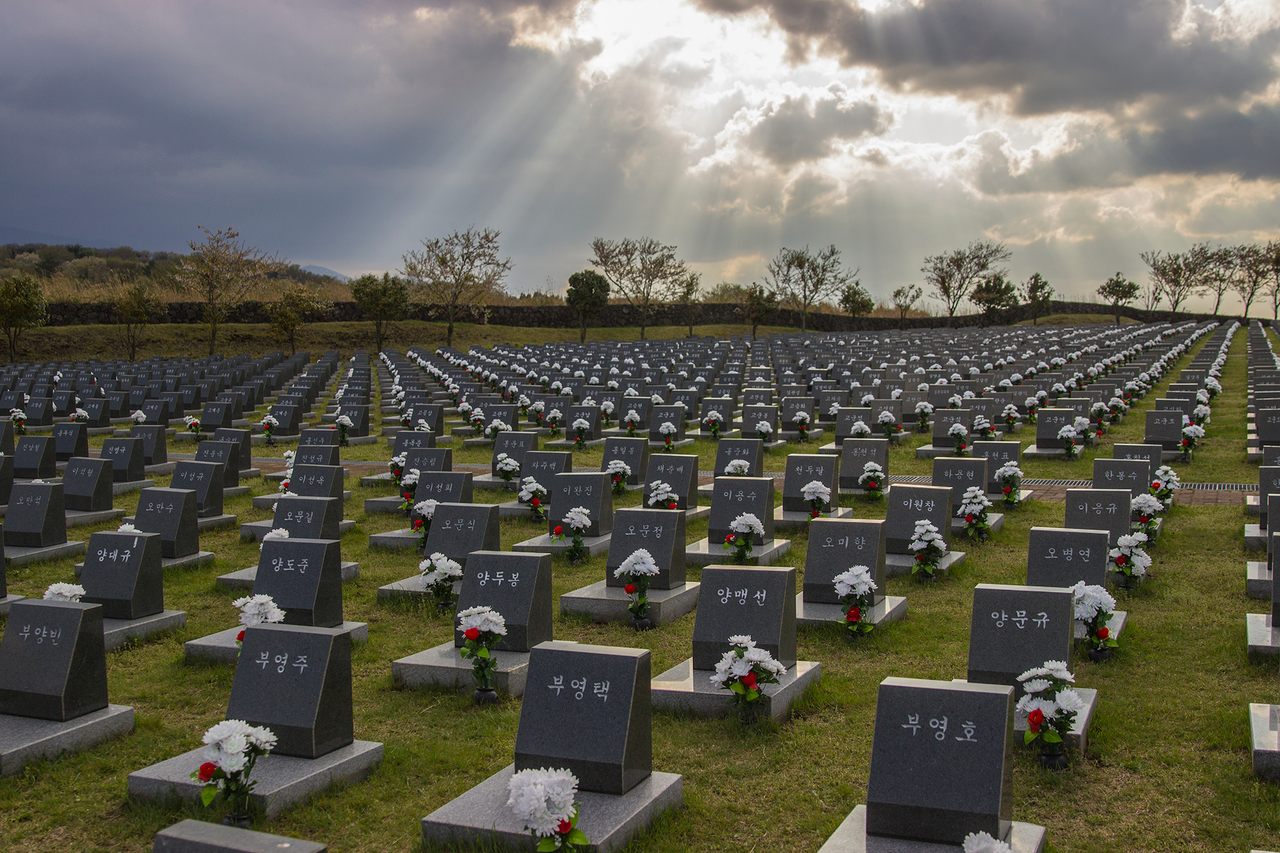 The memorial cemetery at the Jeju 4·3 Peace Park. Samuel Bergstrom
In This Story
Place

A theme park made of glass, from the gleaming books on the shelves to the crystal fish in the mirror lake.
Place

It’s perhaps no surprise that the world’s busiest air route is a nonstop to paradise. Nearly 90 flights a day leave Seoul for Jeju, a semitropical island 60 miles off the southern tip of the Korean Peninsula. With citrus groves, dramatic black-rock beaches, and waterfalls spilling into the sea, Jeju has earned the nickname “Honeymoon Island” for a reason. But many vacationers today may not remember the time when it had a very different reputation.

On April 3, 1948, an uprising pitted Jeju islanders against police, the U.S. military, and the newly formed South Korean government. In the ensuing conflict, up to 30,000 civilians lost their lives, and those who survived were branded traitors and communists. The history of the insurrection, now known as Jeju 4·3, was officially suppressed and then forgotten, before finally reappearing in the national consciousness.

There are, amid the island’s unusual theme parks and beautiful vistas, nearly 800 historical sites related to that period. Most are unmarked, untended, and virtually unknown, and one of the most significant is right where thousands of visitors arrive on the island—a mass grave under a runway of Jeju International Airport.

“As long as you land at Jeju Airport, you land on April 3rd,” says Gayoon Baek, cofounder of Jeju Dark Tours, an NGO that documents and maps these sites. As a human rights activist, she feels that telling the story of Jeju 4·3 is an important step toward resolving the island’s troubled past—especially given the current climate of reconciliation between North and South.

“People were silent for a very, very long time,” Baek says. “I think it is our responsibility to document these places.”

The events of Jeju 4·3 began, ironically enough, with a call for unity. Following the Japanese withdrawal from Korea after World War II, everything south of the 38th parallel, including Jeju Island, fell under the stewardship of the United States, while the Soviet Union maintained influence over the north.

Discouraged by the painful partition, in 1947 the left-wing South Korean Labor Party encouraged nationwide demonstrations for unification. On Jeju, the march dissolved into chaos when police opened fire on a crowd, killing six. Korean police officers then detained, questioned, and tortured Jeju citizens connected to the demonstration. According to the official report of the Truth Commission (formally known as the National Committee for Investigation of the Truth About the Jeju 4·3 Incident), the anger over these heavy-handed tactics transcended political divides, especially after a student died in custody.

On April 3, furious civilians stormed police stations across the island. According to the Truth Commission’s report, U.S. military governor Major General William F. Dean declared—without evidence—that the resulting insurrection and rebel force was led not by islanders, but by North Korean communists. He advocated a scorched-earth policy, which included the involvement of a particularly brutal right-wing paramilitary force, and within months the island was aflame.

Per the commission’s report, entire villages, including women and children, were massacred in surprise raids. More than 2,500 were forced through illegitimate military trials. Those who received a death sentence were shot en masse and buried beneath what would one day become the airport.

Scholar Jong-min Kim, who coauthored the report, states that the United States bears some responsibility for what happened. He points out the August 1948 accord under which the United States retained control over the Korean military and police until their withdrawal from the peninsula in June 1949. “U.S. culpability cannot be avoided because it took place during that time,” says Kim, who has spent decades collecting first-hand testimony from survivors.

The Jeju 4·3 insurrection and crackdown stretched through the Korean War. By 1954, a tenth of the population had died, and roughly a third had been displaced. Five rebel fighters remained at large; throughout the entire seven-year conflict their numbers had never exceeded 500.

Today many people visit Jeju to tackle all or part of the Olle hiking trail, a 262-mile trek that circumnavigates the island. Halfway along the north coast, it meanders through the tumbledown ruins of Gonul-dong, one of 109 villages that were destroyed between 1948 and 1949 alone. From there, a hiker can see the shore, the distant lighthouse, and the odd ferry on its way to the port. It was said that villages within three miles of the coast were in the military’s safe zone, but many burned anyway. Most maps make no mention of Gonul-dong, and few people today know the story behind it. Still, there’s more left of it than there is of many other lost villages, which are often nothing more than a memorial tombstone on a lonely road.

According to a 2015 analysis of Jeju 4·3’s historical remains by Professor Tae-il Kim, there are at least 154 known massacre sites scattered across the island. A few have been preserved as memorials and historical sites. In the southwest, sculptures and signboards mark the path to Seodal Mountain, where 149 detained civilians were secretly executed in 1950. A walkway follows the low curve of Seodal’s ridge, and overlooks the natural bowl beneath, where the victims died. Six years passed before the bodies were returned to their families—as little more than a jumble of mismatched bones. Their remains were interred at Baekjoilsonjiji, the “graveyard of the 100 ancestors.”

The volcanic stone of Jeju is pocked with caves and lava tubes—some of the best in the world, according to UNESCO. During Jeju 4·3, villagers used them to hide from soldiers, sometimes for weeks or even months at a time. More than a hundred people hid in Keunneolgwe Cave, for example, and their experience became the subject of the 2012 movie Jinseul. Looking for the cave today, it’s easy to understand how they managed to keep it secret. Two maps, three navigation apps, and a smattering of local advice weren’t enough to reveal it.

On the opposite side of the island, broken and rusted signs point the way to Darangshi Cave, where 11 people, including women and children, fled when their village was destroyed. The soldiers who found them lit a fire at the cave mouth, suffocating the people inside. Their bodies weren’t discovered for 44 years. Today the entrance is buried under a pile of stone and surrounded by fields.

To Baek, of Jeju Dark Tours, the sites, though so different, tell a single story. “You can go to this massacre site or that massacre site,” she says. “It’s actually the same massacre site.”

The stigma of Jeju 4·3 haunted the island for decades. The National Security Act of 1948 made it illegal to praise or support North Korea and enemies of the state, so even discussing the incident was considered a crime. Islanders swallowed their stories to avoid persecution.

Meanwhile, Jeju’s reputation began to evolve. South Korea’s dramatic economic growth in the 1970s and 1980s gave Koreans the means to travel. Jeju became a favorite honeymoon destination, and the island was reimagined through the photos in countless wedding albums.

The stories of Jeju 4·3 remained suppressed until the late 1980s. In 1988, the scholar and report author Kim, then a cub reporter for the Jeju Shinmun newspaper, began interviewing survivors and printing their stories in a series called “Jeju 4·3 Speaks.” The next year saw the foundation of the Jeju 4·3 Research Institute. When the remains of the Darangshi Cave victims were discovered in 1992, a public outcry irreparably broke the silence. This, along with an easing of North-South tensions in the late 1990s, finally led to an open discussion.

In 2000, President Kim Dae-jung commissioned an investigation, which led to the Truth Commission’s 2003 report. This, in turn, led to a blanket governmental apology for the massacres, as well as the creation of a peace park where a memorial wall bears the name, age, and village of each known victim.

On April 3, 2018, the 70th anniversary of the inciting event, President Moon Jae-in renewed the official apology and pledged to continue peeling back the secrecy on that chapter of history. An amendment to compensate the survivors is currently being considered in the National Assembly. Excavations have reopened at the airport to recover the remains of missing victims from the mass grave and return them to their families if possible.

And as Jeju islanders finally gain some measure of closure, the last chapter of the Korean War may be closing as well. With unprecedented peace talks under way between the North, South, and United States, the legacy of Jeju 4·3 could conclude, as it began, with a call for unity.

The Ultimate Guide to Bizarre Lies Your Mom Told You

Turns out mothers all over the world are telling a lot of the same outrageous fibs.
korean wargraveyardswar historymemorialscemeteriesmilitaryhistory

She's the only woman veteran honored with a monument at West Point. But where was she buried?
cemeteries

Before Arlington was a national cemetery, it was the Lee homestead, and then a tent city for occupying troops.
military history

From wielding lethal bows to commanding troops, the female soldiers of the Central Asian steppe were formidable foes.
cemeteries