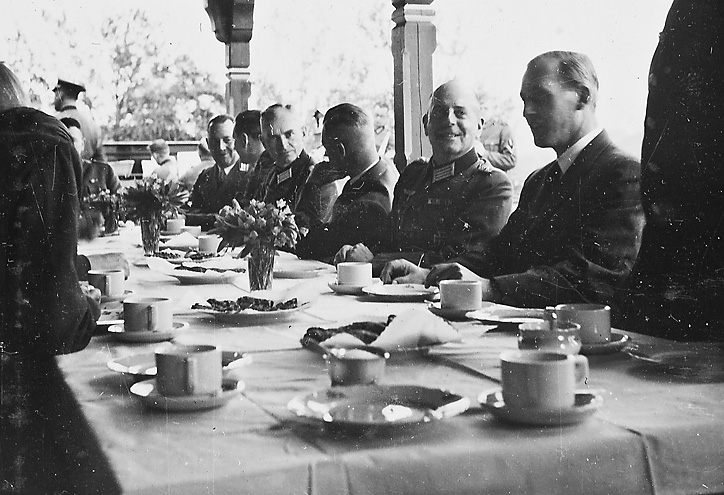 Members of the Nazi party in Norway, 1942. during a visit by the Reichskommissar Josef Terboven. Riksarkivet/ Public Domain
In This Story
Destination Guide

The modern version of your morning coffee first appeared in the 15th century, and it replaced caffeine fixes that ranged from weak, coffee-bean tea to coffee beans mixed with animal fat. For centuries, though, people who wanted to avoid caffeine jitters turned to bitter, coffee-like tangs from substitutes such as chicory. It wasn’t until 1905, in Bremen, Germany, that Ludwig Roselius, a former coffee-roaster apprentice, discovered a method for producing a tasteful, caffeine-free version of the real stuff.

Roselius’s legacy lives on in the form of waiters who carry coffee in one hand and decaf in the other. His invention occupies an odd place in the culinary landscape—rarely loved, sometimes endured, and often despised by coffee purists. But in its early years, decaf found a particularly appreciative and supportive audience: the Third Reich. As the Nazi Party assumed power, its leaders recommended decaf as a way to avoid caffeine, a poison in their eyes. More than a health campaign, decaf was part of a state policy intended to preserve a healthy Aryan population.

Like many inventions, the history of decaf coffee is a bit muddy. According to the book 100 Years of Kaffee HAG, Roselius attributed his father’s death in 1902 to drinking too much coffee, so he invented decaf to save other addicts. (It’s not a completely ridiculous idea; his father worked in the coffee industry.) But decaf may have been an accidental discovery—other accounts describe Roselius receiving a shipment of beans that arrived in a vessel flooded with seawater. Rather than toss the salted supply, Roselius and his colleagues discovered new grounds: After brewing, analyzing, and tasting the beans, they found that the coffee’s flavor was unaffected except for a salty tinge. The seawater had somehow removed the caffeine, too.

Either way, Roselius and his colleagues patented their decaffeination process in Germany in 1905. The following year, Roselius founded the company Kaffee Handels-Aktiengesellschaft, better known as Kaffee HAG, which marketed decaf as a luxury good in Germany. He’d soon sell it across Europe under the name Sanka, or “sans caféine,” and, after World War I, in the United States.

During the 1920s and 1930s, Roselius adapted his marketing to the Weimar Republic’s health and fitness crazes. “The exquisite bean coffee, Kaffee HAG, protects the heart and nerves,” reads one ad, depicting a svelte man in a rider’s outfit. Advances in science, technology, and mechanization, along with the rise of cinema, prompted the craze, as well as movements calling for a return to pre-modern health practices. Corinna Treitel, a professor of history at the Washington University in St. Louis, says that citizens who subscribed to health movements like the Lebensreform (“Life Reform”), which included ardent nationalists, desired more “natural” and “back-to-nature” lifestyles.

In addition to advocating nudism and organic farming, Treitel says, Life Reform practitioners followed pre-modern diets that swore off stimulants, which included refined sugar, high-proof alcohol, tobacco, meat, and caffeine. This philosophy influenced the public health policy of the Nazi regime. “In the 1930s, all of this is part of a Nazi health movement, which became basically part of official policy,” Uwe Spiekermann, a historian at Georg-August-Universität Göttingen, says. “So [Nazi health researchers] like Hans Schreiber, Leonardo Conti, they were backers of these crusades against alcohol, against tobacco, against coffee.”

Under the Nazi Party, the appeal of decaf (a way to avoid stimulants) became state policy meant to safeguard the idolized Aryan race. Geoffrey Cocks, author of The State of Health: Illness in Nazi Germany, says that Nazis “earnestly believed that it was their duty and their responsibility not only to protect health of individual Germans, but the health of the entire German people as a biological, racial entity.” This of course excluded Jews and other non-Aryans, as well as homosexuals and the sick.

Similarly, the Party took measures to warn the Aryan population of caffeine’s dangers. A 1941 Hitler Youth Handbook, writes Stanford science historian Robert Proctor, states that “for young people at least, caffeine was a poison ‘in every form and in every strength.’” By the end of the 1930s, he adds, decaffeinated coffee was “widely available—and strictly regulated.”

That said, it’s doubtful that Nazism had a make-or-break influence on decaf coffee’s success. Spiekermann notes that many of the government’s anti-smoking and temperance campaigns failed, and decaf’s primary selling point was its status as a luxury. Abroad, the popularity of decaffeinated coffee, as well as Sanka, which General Foods purchased in the United States in 1932, skyrocketed after the war.

Furthermore, it’s unclear whether Kaffee HAG supported the Nazi party line. Historian Gideon Reuveni writes in his book Consumer Culture and the Making of Modern Jewish Identity that Kaffee HAG advertised its decaffeinated coffee as Kosher, and Roselius declared in 1932 that: “Anyone who drinks Kaffee HAG is dear and important to us. Which political affiliation or creed he is, is for us completely irrelevant.”

But in his book Creating a Nazi Marketplace, S. Jonathan Wiesen, a professor of history at Southern Illinois University, maps the symbiotic relationship between Kaffee HAG and the Nazi regime. Citing a number of articles published by the HAG, an internal company newspaper, Wiesen writes that at the 1937 Reichsausstellung Schaffendes Volk, a festival that celebrated the accomplishments of the Nazi people, over a dozen cantinas served decaf coffee. Kaffee HAG also served Kaba, its chocolate-drink product, to 42,000 Hitler Youth members at the Nuremberg Rally in 1936. Roselius himself supported Hitler.

“This merging of profit and the public weal was commonplace before and after 1933,” Wiesen writes. “But Roselius’s and HAG’s attention to health, visual beauty, mass persuasion, and Nordic philosophy, combined with appeals to the public good, resonated especially loudly in a state devoted to economic and, above all, racial purity.”

There’s an irony to the Nazis’ promotion of decaf coffee, because Hitler and his party members were casually, unknowingly poisoning themselves. Roselius’s patented process left trace amounts of benzene, which is a “potentially toxic hydrocarbon.” (Today’s decaf undergoes a different process.) And while the Nazis regarded the buzz from a fully-caffeinated cup of joe to be ideologically verboten, Norman Ohler writes in Blitzed: Drugs in Nazi Germany that the Nazis encouraged Aryan people to snack on “meth-spiked” chocolate. The stimulant helped increase productivity, but they didn’t perceive it as poisonous.

“The recommendation was to eat between three and nine of these [chocolates],” Ohler writes, “with the indication that they were, unlike caffeine, perfectly safe.”

A gift guide from the Atlas Obscura team.
ships

The old-fashioned way is also the carbon-neutral way.
gardens

The Vietnamese Cafés Where Koi Fish Are the Stars

A horror movie proved an unlikely source of inspiration.
Video • Object of Intrigue

If the tunes of antique organs and musical marionettes don't intoxicate you, the draft beer certainly will.
Want to see fewer ads? Become a Member.
From Around the Web
THE GASTRO OBSCURA BOOK
Taste the World!
An eye-opening journey through the history, culture, and places of the culinary world. Order Now