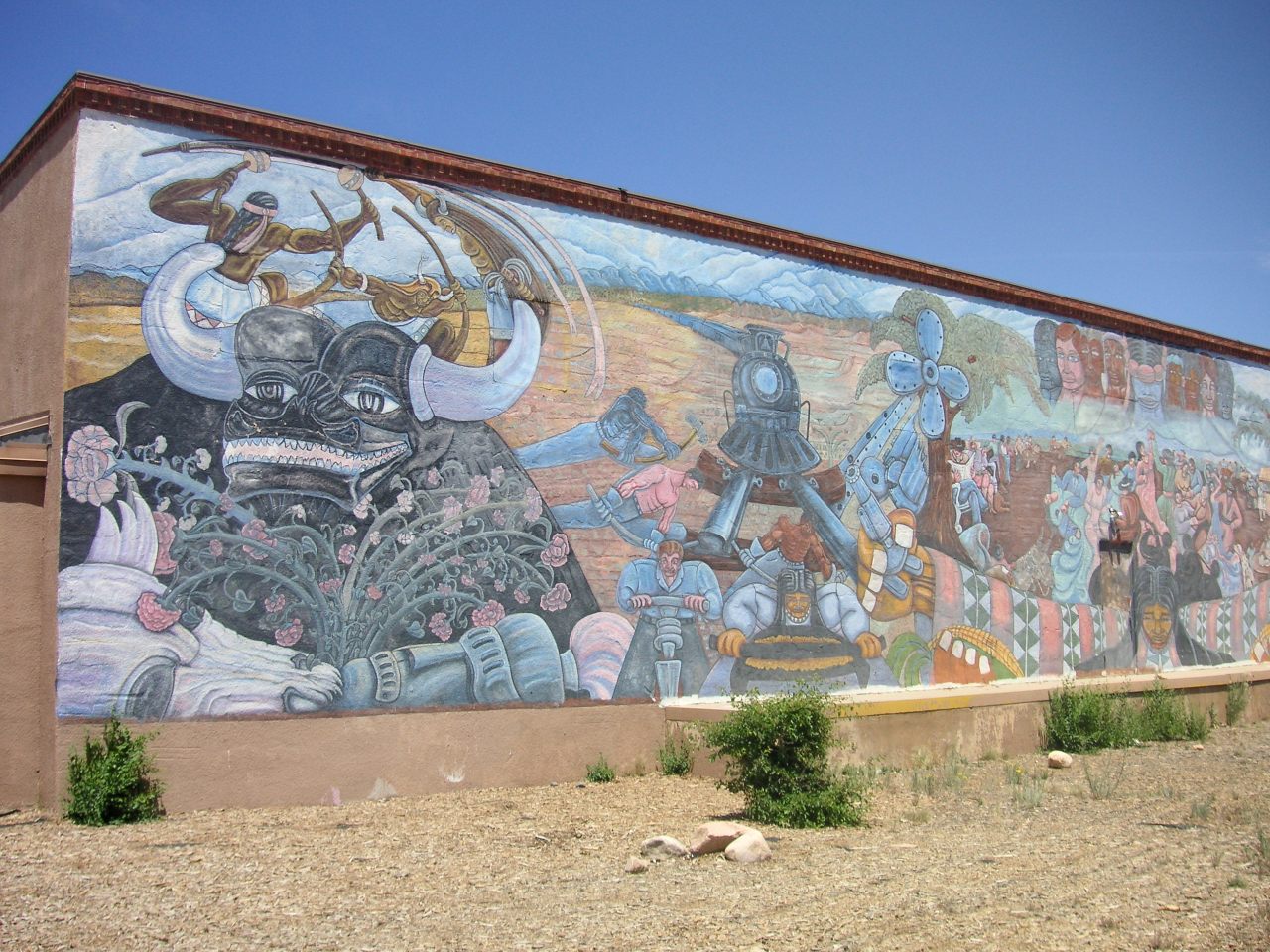 The left side of "Multi-Cultural," a collaborative mural painted in 1980. State officials approved a plan that would destroy the painting. Beatrice Murch / CC by 2.0
In This Story
Destination Guide

This year, a 40-year-old mural called “Multi-Cultural” will likely be destroyed to make way for a new branch of the New Mexico Museum of Art in Santa Fe, called Vladem Contemporary. The sprawling painting, created in 1980 by Gilberto Guzman and a diverse group of artists, depicts a corn goddess holding a microscope and flask, flanked by the Atchison, Topeka and Santa Fe Railway and the Rio Grande Gorge, writes Alicia Inez Guzmán (no relation to the artist) in Southwest Contemporary. Elsewhere in the mural, men and women dance around the Santa Fe Plaza, a bull grins above Spanish armor, and vendors sell Native American frybread. It’s currently on the corner of Montezuma Avenue and Guadalupe Street.

As local legend has it, Guzman, who is now 88 and retired, sold his van to buy paint to start working on the mural, writes Alicia Inez Guzmán. He designed the mural with a German-born artist, Zara Kriegstein, and painted it with numerous collaborators, including David Bradley, Linda Lomahaftewa, Cassandra Mains, John Sandford, Rosemary Stearns, and Frederico Vigil, who studied under Diego Rivera. By the time it was completed, the artist had embroiled himself in enough disagreements with collaborators that he did not appear at the mural’s dedication.

Lomahaftewa, who is Hopi and Choctaw, painted the grove of nopales on the right side of the mural. “I worked on a very little portion of that mural,” Lomahaftewa says, adding that Guzman wanted painters from other cultures to be involved. “But I always glance at it when I go by Guadalupe.”

“Multi-Cultural” was not Guzman’s first mural. In the 1970s, he belonged to the Chicano muralist group Los Artes Guadalupanos de Aztlan. Though several of the group’s murals have been painted over or fallen into disrepair, many are digitized in the Stanford University Library. Guzman’s own murals can still be spotted elsewhere in Santa Fe, such as the Bataan Memorial Building and the New Mexico State Library, Alicia Inez Guzmán writes.

In 2018, the Vladem Contemporary, named for a couple that donated $4 million to the $12.5 million project, stirred controversy with its modern, angular design, which will stand out among the adobe buildings in the city’s historic railyard district, according to the Albuquerque Journal. In recent years, Santa Fe, which is majority Latinx and famous for its art scene, has experienced waves of gentrification that have displaced many residents, according to the Santa Fe Reporter.

In December, the New Mexico Department of Cultural Affairs approved the final design for the Vladem, and with it, declared the mural too unstable to be restored. “No treatment is currently possible that can fully address the integrity of either the original image or the artist’s aesthetic intent,” the New Mexico Department of Cultural Affairs’ statement read, adding that the mural has been digitally photographed. Groundbreaking for the Vladem Contemporary begins this year, though it is unclear when the mural will be broken down. “I find it sad that they need to destroy a mural to create a museum,” Gregorio Luke, an expert on Mexican-American art, writes in an email. “Why can’t they keep both?”

On January 8, Guzman himself broke his silence, claiming in a statement to the Santa Fe Reporter that the Department of Cultural Affairs has “not disclosed that the muralist has an existing state contract to redo the mural.” In 1980, Guzman signed an agreement with the New Mexico Department of Finance and Administration’s Property Control Division that he would have access to the mural for “its natural life.” According to his statement, Guzman maintained the mural over the years and repainted it in 1990. In its own statement, the Department of Cultural Affairs argued that the mural has reached the end of its life, and suggested that it could live on as a digital projection inside the museum, or as digitally printed panels.

In 2016, Guzman said on his Facebook page that he planned to restore “Multi-Cultural.” But this month, he seemed to accept that its fate may be out of his hands. “I am retired,” Guzman told the Santa Fe Reporter in his statement. “Whatever happens to it, I don’t care. I did it once and twice, and I enjoyed the hell out of it.”

Exploring the Haphazard Archive of a Paris Film Legend

In Southern Spain, a destructive blaze threatened both Genalguacil's people and their beloved public art.
paintings

Can these unlikely bursts of beauty refresh Australia’s parched rural towns too?
murals

For These Young Street Artists, Amman Is a Beige Canvas

Join us for a daily celebration of the world’s most wondrous, unexpected, even strange places.
Sponsored by Discover Atlanta
Video