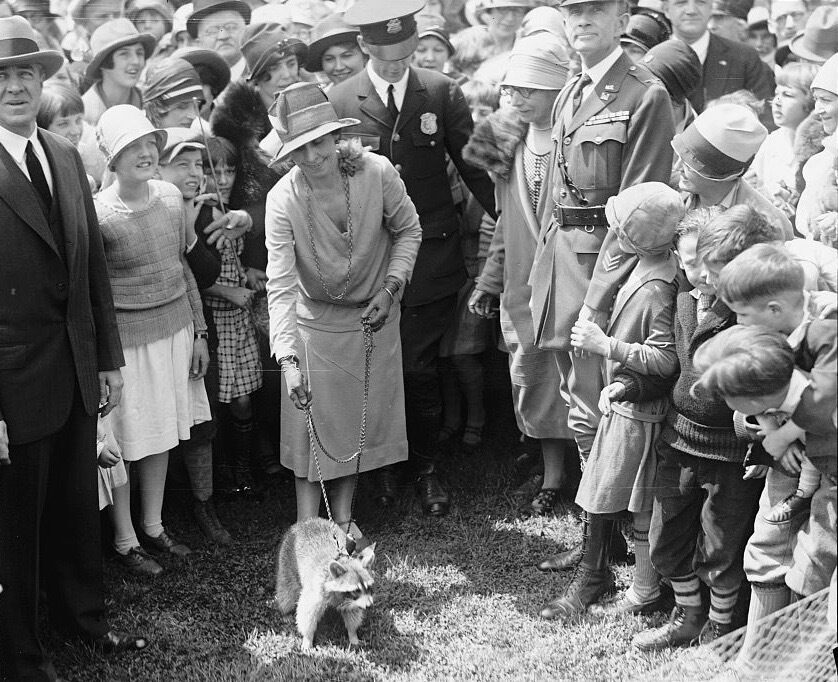 First Lady Grace Coolidge in 1926 with what was meant to be dinner. Library of Congress/LC-DIG-npcc-16730
In This Story
Destination Guide

In November of 1926, a woman from Mississippi sent President Calvin Coolidge a raccoon for Thanksgiving. An accompanying note promised that it had, in her words, a “toothsome flavor.” The story of the day, however, was not that Coolidge received a raccoon for dinner, but rather that he declined to eat it. “Coolidge Has Raccoon; Probably Won’t Eat It,” read The Boston Herald.

Indeed, countless other raccoons throughout American history did not share such a lucky fate as Coolidge’s pardoned critter. Raccoon meat is a longstanding American culinary staple that went from “slave food” to New York City markets to cookbooks across the country. The critters that once sustained entire regions have disappeared from most modern dinner tables, but not all of them.

Written documents outlining Native American diets are scant, but it’s more than apparent that the practice of eating raccoon originated with them and was later handed down to enslaved African people across the American South. Michael Twitty, James Beard Award-winning author of The Cooking Gene, points out that the word itself comes from the term aroughcun, Powhatan for “hand-scratcher,” which in the mouths of many West Africans, who have no “r” sound in their language, became the antiquated but colloquially known “coon.”

Enslaved African people throughout the American South incorporated raccoon into their daily diets to supplement the meager provisions offered on plantations. They were no strangers to small-game hunting: The raccoons of North America behave much like the grasscutters of West Africa, a similarly nocturnal bush rodent that Africans had trapped and eaten for centuries. “They were master trappers,” says Twitty. “In fact, some of the traps enslaved people used are mirror images of traps from West Africa, if not similar to traps that Native Americans used.”

Enslavers approved of the practice. “The slaves weren’t allowed to hunt during the daytime,” says Hank Shaw, author of Hunt, Gather, Cook. “So after they’d finish their workday, they were permitted to hunt in the middle of the night to get some extra protein in their diet.” By granting enslaved African people raccoon meat trapped with techniques that fused African and Native American methods, slave owners could keep their slaves well-fed without the risk of arming them. Archaeological evidence pulled from plantations between Florida and Virginia indicates that whole raccoons were often cooked in stews—an echo of West African culinary memory reverberating across the Eastern seaboard.

“It’s not a big leap to think about my ancestors—coming from a place of utilizing everything that’s edible—making contact with another group of people with a similar way of life,” says Twitty of the Native to African raccoon transmission, “and then transferring these traditions onto white Americans.”

Throughout the late 1800s, the tradition of eating raccoon saturated the national food-scape, as westward settlement across the Appalachians met the northward march of newly free Black Americans. “If you were a poor white person, you were cohabitating with an African or a native person,” says Twitty. “And if they were making raccoon for dinner, that’s what everybody was eating.”

Dr. Megan Elias, a historian and gastronomist from Boston University, writes that small game such as raccoons and squirrels simultaneously fed frontier families and supplied added income in the burgeoning fur trade. Culinary historian Sarah Wassberg Johnson writes that eating raccoons—nuisance animals apt to ravage vegetable fields—also kept crop yields robust. “With every bit of food raised needed to get through the winter, pest animals became not only fair game, but good eating, too.”

After emerging as a food of necessity, raccoon enjoyed its day in the middle-class American sun. It was sold in game markets all the way up to New York City, both alive and dead. It made its way onto restaurant menus from Maine to Louisville and into cookbooks from Colorado to Vermont. Johnson writes that hunting even became a popular nighttime social event among men who bred “coonhounds” that chased the animals into treetops to be easily shot. And by 1926, of course, raccoon was food fit for a president.

With the proliferation of factory farming through the 1900s, however, Americans reconsidered their meat preferences. Urbanites abandoned small game like raccoon, which was laced with unfavorable racial and class stigmas, in favor of cheap pork, chicken, and beef. “It belies the fact that without those measures, a lot of poor whites wouldn’t have survived,” says Twitty of the raccoon stigma. Black Americans largely deserted the critters as well. “When black folks in America moved from the country to the city, the raccoon went the way of the banjo,” says Twitty. “It’s a relic of a time we didn’t really want to associate ourselves with.”

Nonetheless, having supported entire regions of underprivileged Americans for centuries, raccoon indelibly worked its way into the American culinary psyche. Preparation instructions for raccoon carcasses appeared in multiple editions of The Joy of Cooking throughout the 1900s. Raccoon hunting itself became an icon of rural American life, if Dolly Parton lyrics mean nothing else. Shaw says the propagation of coonhounds kept the tradition of nighttime raccoon hunts alive in the Appalachian South. He adds that word-of-mouth raccoon meat markets stretched throughout the Midwest as a byproduct of trapping, where colder weather meant lusher fur. “Best kept secret around,” an 86-year-old Missourian told the Kansas City Star in 2009 over a trunk full of frozen raccoon carcasses in a thrift store parking lot.

The tradition today survives in rural, economically distressed communities, often as fund-raising events. The 93rd annual “Coon Feed” in Delafield, Wisconsin, last year served more than 300 plates of raccoon to raise money for area veterans. The 76th annual “Coon Supper” in Gillett, Arkansas this past January raised money to send a small-town student to college; the event has also become something of a bureaucratic initiation where aspiring local politicians ingratiate themselves to rural voters by eating varmint on camera. “They literally serve raccoon. And you’re supposed to eat some,” GOP Rep. Rick Crawford told Roll Call in 2014. “That’s the tradition.”

As for Coolidge, his refusal to eat raccoon earned him a family pet. For Christmas of 1926, he gave the “toothsome,” hand-scratching, would-be entree a steel-plated collar with her name engraved: Rebecca. She lived with the Coolidges for the remainder of Silent Cal’s term, taking a liking to corn muffins and, as First Lady Grace Coolidge wrote, “playing in a partly filled bathtub with a cake of soap.”

Rebecca was donated to the Rock Creek Park Zoo in 1928 to live out her days among other raccoons, though her days of presidential extravagance cursed her with a refined palette and an intolerance to wild animals. She quickly grew ill and died, though, of course, it could have been worse. She could have been a turkey.

They are being recovered from seed banks, university vaults, and museum shelves.
native americans

21 oddities that became iconic neighborhood fixtures for those in the know.
Video • Gastro Obscura

You can get anything you want at the former site of the restaurant immortalized by Arlo Guthrie.
Oakland, California

This bakery sits on the site of the Black Panther's first headquarters.
Kearney, Nebraska

Inside this magical collection, you can buy recipes cooked up by church ladies, motorcycle clubs, and clowns.
Washington, D.C.

The world's oldest soul food restaurant is also one of its best.
Want to see fewer ads? Become a Member.
From Around the Web
Travel With Atlas Obscura
Are you a curious traveler?
Join local experts in 50+ destinations for a once-in-a-lifetime journey.
View Our Trips
Thanks for sharing!