A Dinner at the End of Our World - Gastro Obscura
Want to see fewer ads? Become a Member. 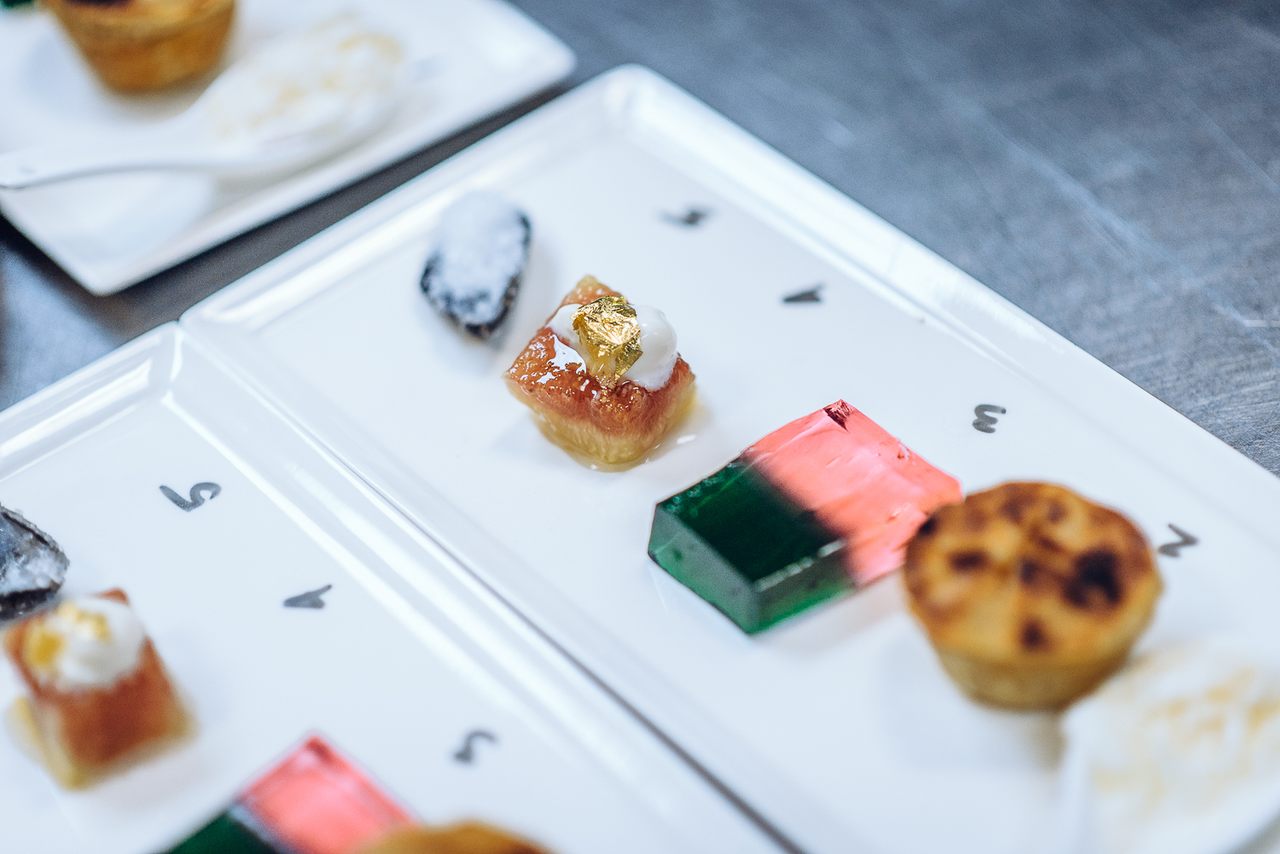 The dessert of the future might be nutrient gel. All photos by Steven Acres

On September 15, 2017, 45 participants sat down to an ocean-themed dinner in Brooklyn. But not an ocean any of us would recognize. It’s many degrees warmer and contains no fish.

The event conjured how we’ll eat in a future impacted by climate change. Author Alexandra Kleeman and artist-chef Jen Monroe invented the post-apocalyptic meal; they call the project The Next Menu. The theme came from Kleeman, who is the author of the food-fixated novel You Too Can Have A Body Like Mine. Since Kleeman had been musing on food, the ocean, and climate change, she and The Bellwether, a Brooklyn-based art-event group, brought Monroe on board to bring a futuristic, dystopian dinner party to life.

Monroe had thrown less-serious, immersive dinners before, themed around different colors. For The Next Menu, Monroe says she and Kleeman looked for foods that do well despite “acidification, rising temperatures, coral reef bleaching, over-fishing,” and more. Written musings by Kleeman—on food and the sea—accompanied each dish.

The results were unfamiliar. Moss-green spirulina ice cubes kept diners’ drinks cool. Spirulina is super-nutritious microalgae that grows quickly, perfect for a food-scarce world. A soup of mussels and seaweed came with a lump of shrimp paste and encouragement to stir it in. This was intended to be a hopeful dish, symbolizing shrimp farms in small ponds that might be a vibrant future food source.

The ponds would be oxygenated by seaweed and filtered by mussels, “so as an ecosystem, it’s pretty clean and yields three different food sources,” Monroe explains. She says the soup was good, too. Other dishes included seaweed and octopus, which flourish in our changing oceans.

The meal culminated with five desserts. While that might seem like a lot for a dystopian dinner, each symbolized a different possible outcome for our future food.

An elegant jellyfish-buttermilk sorbet is in our best possible future. We adapt to our new world and make delicious food from odder ingredients. Or our food system collapses, resulting in apple pie made from what can grow in our backyards. Colorful nutrient gel is another option, as is a dessert of honeycomb and gold leaf, from a future where bees are extinct and good food goes to the rich.

The scariest dish is a single salty shell. According to Monroe’s vision of the future, we might end up eating no dessert at all. “In terms of likelihood, I think eventually all of these options will happen to some extent,” Monroe says.

The date for the dinner was set as 30 years from now, a time Monroe says they chose because many of us will live to see it. Also, by then, ocean ecology may be at a point of no return. Monroe hopes the dinner underlined the need to appreciate what we have, foodwise, as well the need to protect it. But instead, she says, the guests told her that the food of the future seemed delicious.

How to Put a Fake Island on the Map

Frisland never existed, but for centuries, people wanted to believe that it did.
menu mondayseafoodclimate changeoceansvisualfood

Eating local doesn't mean what it used to.
science

A researcher says her award-winning image of a swirling school of fish is also a metaphor for the oceans' health.
poison

“If you can’t gather shellfish then you’re going to starve.”
Video • PinDrop