Around the World in Things You Can't Do to Flags - Atlas Obscura
Want to see fewer ads? Become a Member. 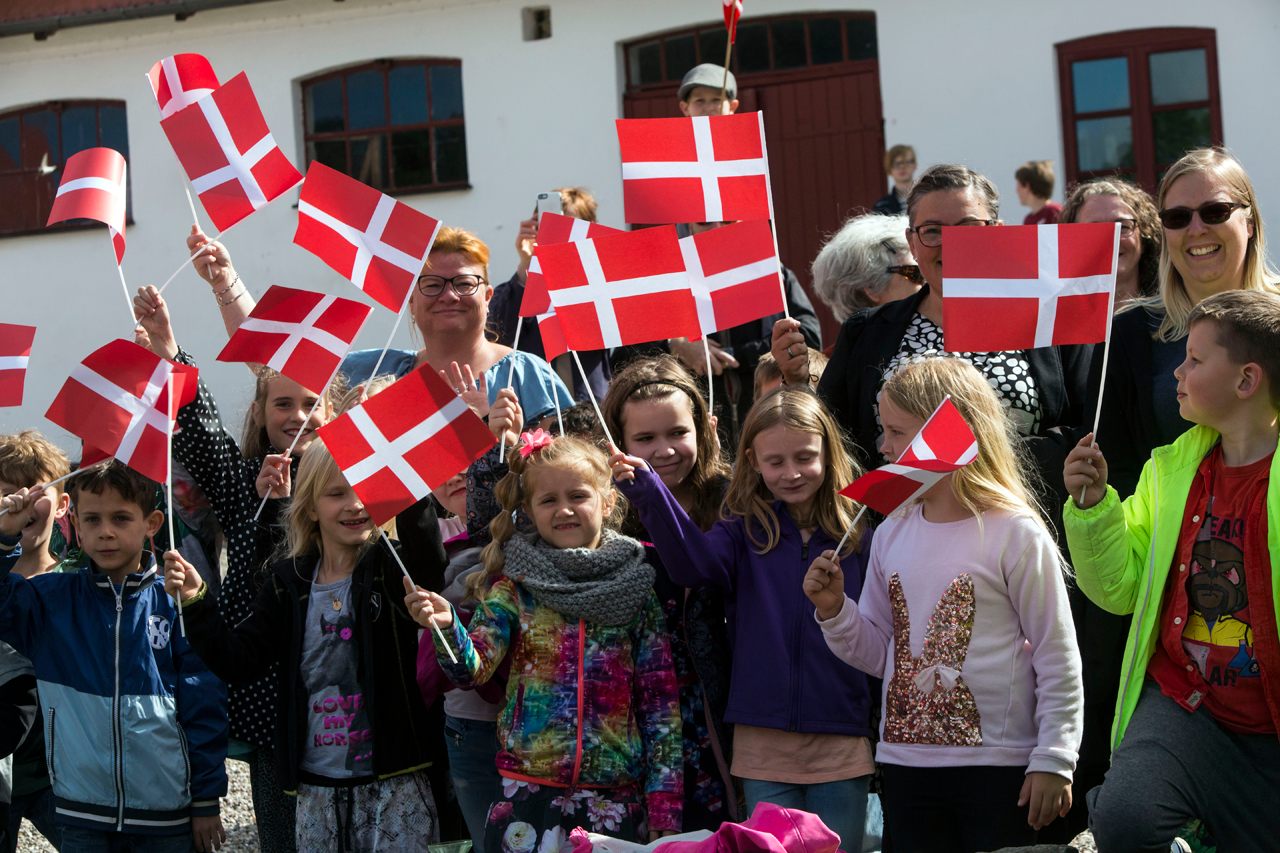 Denmark is unusual in that it has protections against desecrating any flag—except its own. Ole Jensen - Corbis/Corbis via Getty Images
In This Story
Destination Guide

A symbol used to represent something powerful or influential—a person, a sports team, a religion—also makes itself vulnerable to destruction. It isn’t easy to, say, destroy a country, but you can destroy a symbol of that country fairly easily, and there’s no symbol more identified with a nation, and thus more commonly destroyed in protest, than a national flag.

In the United States, the Supreme Court has been clear and consistent in the opinion that the desecration of the Stars and Stripes is an American right, enshrined in the First Amendment. To change this, as has been continually proposed, would be extremely difficult, requiring—from a viciously divided Congress—a two-thirds vote on a constitutional amendment, followed by ratification by at least 38 fractious states. In short, it’s not likely.

How countries treat the destruction of their national symbols varies around the world. That the United States has such strong protections for flag burning makes it rather unusual. Most other nations, including many generally perceived as progressive and permissive, have some kind of flag-desecration laws on their books. These laws are, often, a fascinating blend of the seemingly arbitrary and the desire to suppress legitimate protest.

The concept of a national flag, or even a nation in general, is not particularly old. Nations as we think of them didn’t really exist until the 17th and 18th centuries; prior to that, there were territories, kingdoms, empires, and various other polities and geographic entities, but no universally recognized concept of nationhood, with specific borders and governments and rules for communication with each other. Flags themselves are very old, of course, but until the Age of Sail they were mostly used for communication, or to identify more localized groups, such as a specific family line or military unit. As national symbols, they didn’t begin to emerge until the mid-1800s, and it was a while longer before they became a seeming requisite for statehood.

Because flags are fairly recent developments, the concept of flag burning, or flag desecration of any sort, is a fairly recent idea as well. Effigies were a much more common form of big-concept protest prior to the modern era. In the United Kingdom, it has been a tradition to burn an effigy of the Pope, or of failed Catholic plotter Guy Fawkes, for hundreds of years. Leaders embodied the state, so in the absence of other symbols of a legal territory, people burned representations of specific people.

Flags have several advantages over effigies. They’re cheaper and easier to acquire than a reasonable likeness of a human—and fairly flammable, depending on material. Flag burning really became a go-to tactic in the United States in the 1960s, during the Vietnam War, but around the world, burning a flag has long been a simple, effective means of protesting a federal government.

Governments have some stake in this, as flag burning is most obviously a form of protest against them, often conducted by persecuted minority groups as a means to raise awareness (or by irate people in another nation). Governments don’t generally want negative publicity, or people angrily pointing out their shortcomings. In that sense, banning the action is not so different from actively breaking up a protest march with tear gas or worse. “If it’s a crime to burn the flag because it’s the flag, the only reason the government is doing that is because it disagrees with the message the protester is trying to convey,” says Brian Hauss, a staff attorney at the American Civil Liberties Union who focuses on free speech issues.

There are other reasons for these laws as well. Denmark, for example, bans the burning of any flag, with one exception: the Danish flag itself. According to Danish law, burning the flag of a foreign nation is a provocation that can hurt Denmark’s status in the world community. Burning the Danish flag, though? Fire it up; some even say that burning is the accepted way to dispose of a Danish flag in Denmark, though that doesn’t specifically appear in the law.

Australia is one of the few nations, along with the United States, Canada, and Belgium, to explicitly allow flag burning. As in the United States, this hasn’t stopped legislators there from attempting to ban the protest act, or at least provide the political appearance of attempting to ban it. During the violent 2005 race riots known as the Cronulla riots, a Lebanese-Australian teenager burned an Australian flag. He was charged and prosecuted, too; not for burning a flag, but for stealing and destroying personal property. This use of other laws to prosecute acts of flag burning is a common practice: Charges may include disturbing the peace, theft, destruction of property, arson, and other crimes, in lieu of symbolic desecration.

China, on the other hand, is going hard in the other direction. In 2017, the nation passed an amendment that dramatically increases the penalties and the scope of its symbol-desecration laws. Offenders can be hit with jail terms of up to three years for acts such as mocking the national anthem by singing it in a sarcastic voice. Burning, defacing, or stomping on the national flag is covered, too.

A lot of the countries that have such laws on the books don’t usually bother with the enforcement side. France, on the other hand, actually prosecutes. In 2010, an Algerian man, furious with the extremely bad customer service he was receiving at a local government office, grabbed a Tricolore and snapped its wooden pole in half. He was forcibly restrained and fined—not for destruction of property, but for “insulting” the flag.

“Insult” is a broad brush. India prefers bonkers specificity, with laws so granular that they cover much more than actual desecration. The country legislates which side of a room a flag must be installed in, what kind of material is allowed, who can mount a flag on a vehicle (only government or military personnel, and only some of them), the order in which the Indian flag must be placed when displayed with other national flags, and the specific weight of one square foot of flag material. Violate any of these and you’re already afoul of the flag laws. Sometimes it doesn’t even take a flag at all; in 2007, a petition was filed against cricketer and national hero Sachin Tendulkar for cutting a cake that had the flag on it.

Israel is another country with an aggressive stance toward symbolic protest involving flags. The government, in 2016, dramatically raised the financial penalty for conviction. Inflation and not one but two separate new currencies make it hard to track just how much it went up, but the new penalty is a maximum fine of over $16,000 and up to three years in prison. Last year, a Palestinian protestor stomped up and down on an Israeli flag as part of a protest against the Israeli army shooting people through the Gaza fence. He is not nearly the only one to be prosecuted for flag desecration in Israel.

Those fines will hurt, but sometimes such forms of punishment are as symbolic as a flag itself. In Mexico, flag desecration is illegal, but not often prosecuted. A notable exception came in 2008, when, after a very long legal battle, famed poet Sergio Witz was found guilty of desecrating the Mexican flag—in verse. In 2002, he published “La patria entre mierda,” or “The Motherland Among the Shit.” “I clean my ass with the flag,” he wrote, along with “I dry my urine on the flag of my country,” and a couple of lines about how the flag produces nothing but nationalist vomit. Witz has later conceded that the poem is not his best work.

In any case, in 2008, a judge gave Witz a symbolic fine of 50 pesos—about $2.50—as a “warning” to those who abuse freedom of speech, according to an article in El Universal. Witz has said the fine is ridiculous, and he refuses to pay it.

For a long time, the United States was all of these places and none. Before 1989, a whopping 48 of 50 states had some type of flag-burning law on the books. But a case called Texas v. Johnson, in which a young protester was tried for burning the American flag during the 1984 Republican National Convention, settled things. In a 5–4 decision in 1989, the Supreme Court declared flag burning to be protected political speech under the First Amendment, immediately invalidating those 48 state laws.

It’s not difficult to see a pattern connecting some of the countries that are serious about their flag-desecration laws—they have governments noted for active, even aggressive, responses to dissent and protest. Take note, in case the United States ever does pass a constitutional amendment to ban flag burning.

This story originally appeared on September 12, 2019.

What It Actually Means to 'Read the Riot Act' to Someone

The saying got its start as an 18th-century British law to punish protestors.
politics

They wore pants, advocated for free love, and refused to back down.
crime

The 'Iron Lady' of Kashmir

For more than 30 years, Parveena Ahangar has looked for those who have disappeared in Indian-administered Kashmir.
crime

Inside the Deep Gun Culture of Gwalior, India

Relics of outlaws, markers of status, and enforcers of social hierarchy, firearms are woven into rural life.
Video • Wonder From Home