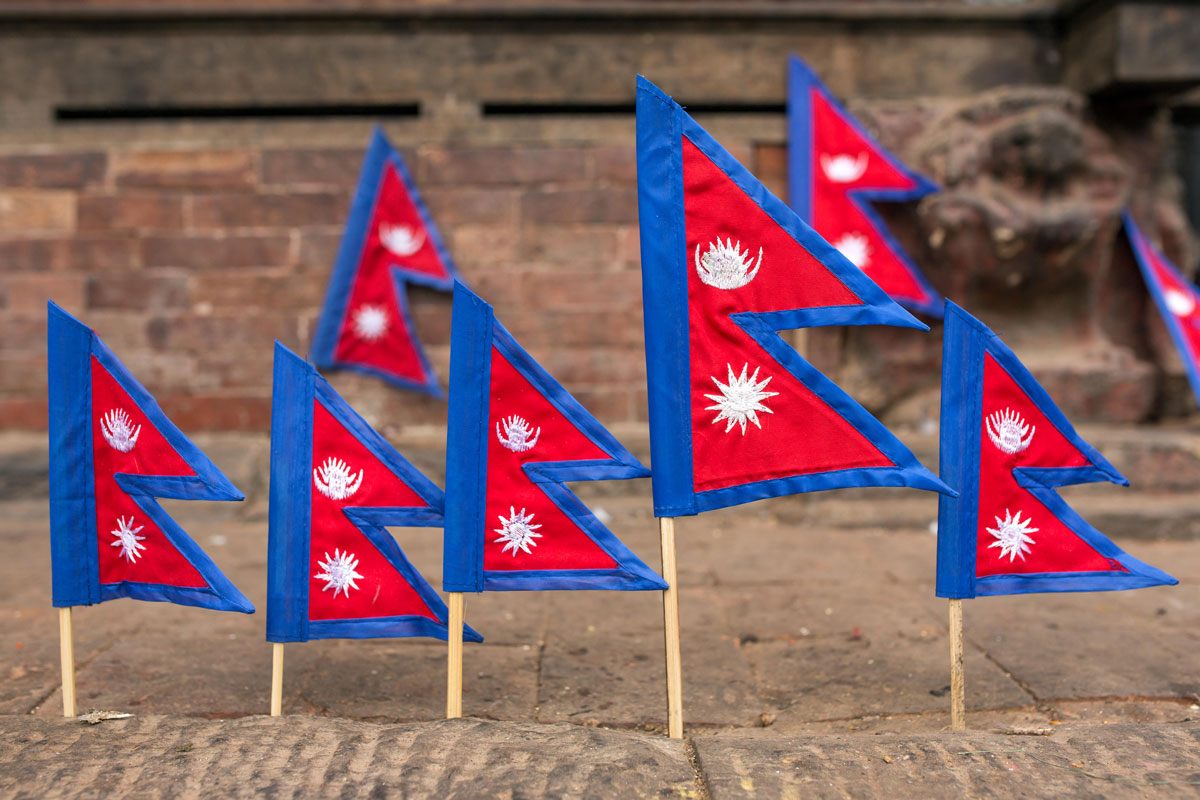 Flags for sale in Kathmandu, Nepal. Aliaksandr Mazurkevich/Alamy
In This Story
Destination Guide

A very strange thing about national flags is how similar they are. More than 75 percent of all national flags include the color red, and more than 72 percent include the color white. A whopping 30 national flags have the red, white, and blue color combination. Stripes, stars, and crosses are exceedingly common. There are no rules, no international governing bodies, that tell a country what a flag can and cannot be, and yet all flags save one are rectangles. (As all squares are rectangles, the square flags of Switzerland and Vatican City are not as unusual as they might think.) That one outlier is Nepal.*

The Nepali flag consists of two overlapping triangles, of different sizes defined with mathematical precision. It is the world’s only five-sided national flag. Other countries could do this and do not, and probably never will. So how did this happen?

National flags are a more recent creation than you might think. Prior to the 17th century, nationalism wasn’t something for most people to participate in, as travel between countries was expensive, arduous, and rare. National identity wasn’t the most important identity; you’d be more aware of a local municipality or individual lord. A king might have flown a flag, but these were more like representations of a coat of arms and tended to change when a new ruling family came to power.

Aside from the royal families, the only time one would really need to identify as part of a larger whole was in battle. Flags and banners were used to identify military units, but they were usually specific to the regiment or group of soldiers rather than the country as a whole. This all started to change during the Age of Sail, especially around the late 18th century. “It comes from trade on ships, which were moving between different places with the beginnings of globalization,” says Scot Guenter, a professor at San Jose State University, senior fellow at the Flag Research Center, and avowed vexillologist (that’s someone who studies flags).

The vast majority of national flags began to appear in the mid-1800s, along with the emergence of the nation as a concept rather than just the place one’s king ruled. This was the first time national flags were flown outside of war settings, and within a hundred years or so, flags became strangely homogenized in shape. They were simply tools to recognize a ship’s origin at a distance, and a rectangular flag is an ideal shape to catch wind and appear taut, allowing those far away to understand it.

But flags weren’t always rectangular. Pennant flags—tapering and triangular, or sometimes forked at the end, and sometimes called “pennons”— also began appearing, particularly in Asia. It was the European countries, though, that dominated the Age of Sail, sailing to the New World and creating colonies and trade routes, and their flags tended to be rectangular, so by the mid-19th century, most Asian countries had changed their flags to be rectangular as well.

The Nepali flag is currently red with a dark blue border, in the shape of two pennants. The pennants are not the same size (the upper one is smaller) and they overlap in the middle. The upper triangle includes a white stylized moon; the lower has a white sun.

“Nobody knows who exactly created it,” says Anil Pandey, the founder of the nonprofit Motherland Nepal. The history of the flag of Nepal is maddeningly vague. A reproduction of the flag in a French book from 1928 shows a very similar flag to what’s used today, except with a green border rather than blue and faces on both the sun and moon. Shortly after that, the color was changed to blue; by the time of the country’s constitution, in 1962, the flag’s colors were firmly red, white, and blue. It’s unclear how or why this change happened.

Dayaram Shrestha, a prominent academic and professor in Nepal, traced the history of the double-pennant flag back to the time of King Mandev, the last king of the Lichhavi dynasty, sometime around the year 450, but documentation is scarce. Flags, until quite recently, were changeable and not really considered important enough to describe in much detail.

Nepal was unified during the reign of the Gorkha king Prithivi Narayan Shah in the mid-1700s, and many accounts date the creation of the double-pennant, sun-and-moon flag to around this time, or to the early 1800s. But there still aren’t historical reproductions of a flag recognizable as the Nepali flag from this period; it’s likely that some version of the Nepali flag began to be standardized sometime in the 1800s, but nobody knows for sure. This is not unusual, timing-wise; the late 19th and early 20th centuries were the decades when most modern national flags became formalized.

The meanings of the sun and moon are also not known, but it’s less that the specific meaning has been lost and more that national flag symbols tend to represent different things to different people during different times—sometimes good, sometimes bad. Some suggest that the moon and sun represent the Shahs and the Ranas, the two most powerful ruling dynasties of Nepal over the last 500 years. Some say that the moon and sun represent pride and peace. Or maybe permanence; “As long as we have the sun and moon, Nepal will always be there,” says Pandey. These are all correct and also none of them are correct. “The flag of Nepal does not just mean one thing; its meaning will change over time,” says Guenter.

It has also been proposed that the double-pennant design is meant to replicate the Himalayas. Both Guenter and Pandey dismiss this.

Nepal, along with other countries in the region, including neighboring India, has always favored pennant flags over rectangular flags. “There are other forms of pennant type flags, mostly used in Hindu and Buddhist temples around Nepal,” says Biraj Bista, a former politician in Nepal. “The color of the flag is often yellow or orange and there could be ‘OM’ written in the middle of the flag.” The double-pennant is unusual but not unheard-of, and there isn’t any particular symbolism in it. It’s just two pennants.

But the specific design of the pennants is something else. Upon the writing of the country’s constitution in 1962, an entire section was dedicated to the precise mathematical proportions of the flag. People were, probably, drawing it incorrectly, at least according to the ruling power. It requires a ruler and a great deal of patience to draw correctly, but the Nepalese constitution is very clear on exactly how it should be composed.

This document also produced one minor change; prior to 1962, the sun and moon both had faces in them. Now, they don’t. Nobody knows exactly why.

The colors are also interesting. Pandey explained that the national color is red, that it might indicate bravery while the blue represents peace. Bista echoed this, saying that the red color symbolizes the “hotheadedness” (his word) of the Nepalese people, and blue for peace. But red and blue are also, by far, the most popular colors to use on a national flag. What do the red and blue colors represent on the American flag? Anything? Nothing? (Nobody knows this either.)

Theoretically, any country could at any moment decide to change its flag to something non-rectangular. But even countries with incredibly simple flags—Poland, are you serious with this—would have trouble doing that. “There’s no reason why other countries can’t do this; it’d be good for branding,” says Guenter. “But people have an attachment to the flag.” National flags are vital symbols, even if they’re ugly or boring.

The Nepalese flag would have been interesting and a bit of an outlier before the Age of Sail; there were other pennant flags, but double-pennants were rare. Now, though, the Nepalese flag is something totally different, completely unlike any other national flag. Guenter thinks the relative isolation of Nepal might have something to do with this; unlike, say, the former Soviet republics, nobody ever conquered Nepal and forced some new flag onto them, and Nepal was not really a participant in the Age of Sail. So the flag just sort of formed naturally and then stayed the way it was for a while without outside interference.

By the 1962 constitution, Nepal had never had any particular reason to change its flag, and suddenly, here was the opportunity. But there was no real reason to change it, and by this time it was clear both that national flags are an important symbol and that the Nepalese flag is unique. Pandey, as well as a few other Nepalese people I talked to, told me that the flag is a real source of pride for Nepal. “Most people feel proud to have such a unique flag,” says Bista. “Personally, I look at it as a symbol of unification in diversity we have in Nepal.” It’s something that immediately elicits a reaction, something unlike any other place on Earth.

*Correction: We originally said that all but three national flags are rectangular. The Switzerland and Vatican City flags are square-shaped. But squares are, technically, rectangles.

Explore the Unforgettable Flavors of Your Favorite Off-Brand Foods

Check out our readers' top gems from the oft-overlooked world of off-brand eats.
flags

Climate change is destroying centuries-old structures in remote Mustang. Can the buildings—and the culture—be saved?
exploration

An anthropologist’s research on water insecurity reveals how clean water can reinforce a community’s physical and spiritual health.
animals

Activists envision a bloodless future for the annual Dashain festival.
Want to see fewer ads? Become a Member.
From Around the Web
THE GASTRO OBSCURA BOOK
Taste the World!
An eye-opening journey through the history, culture, and places of the culinary world. Order Now