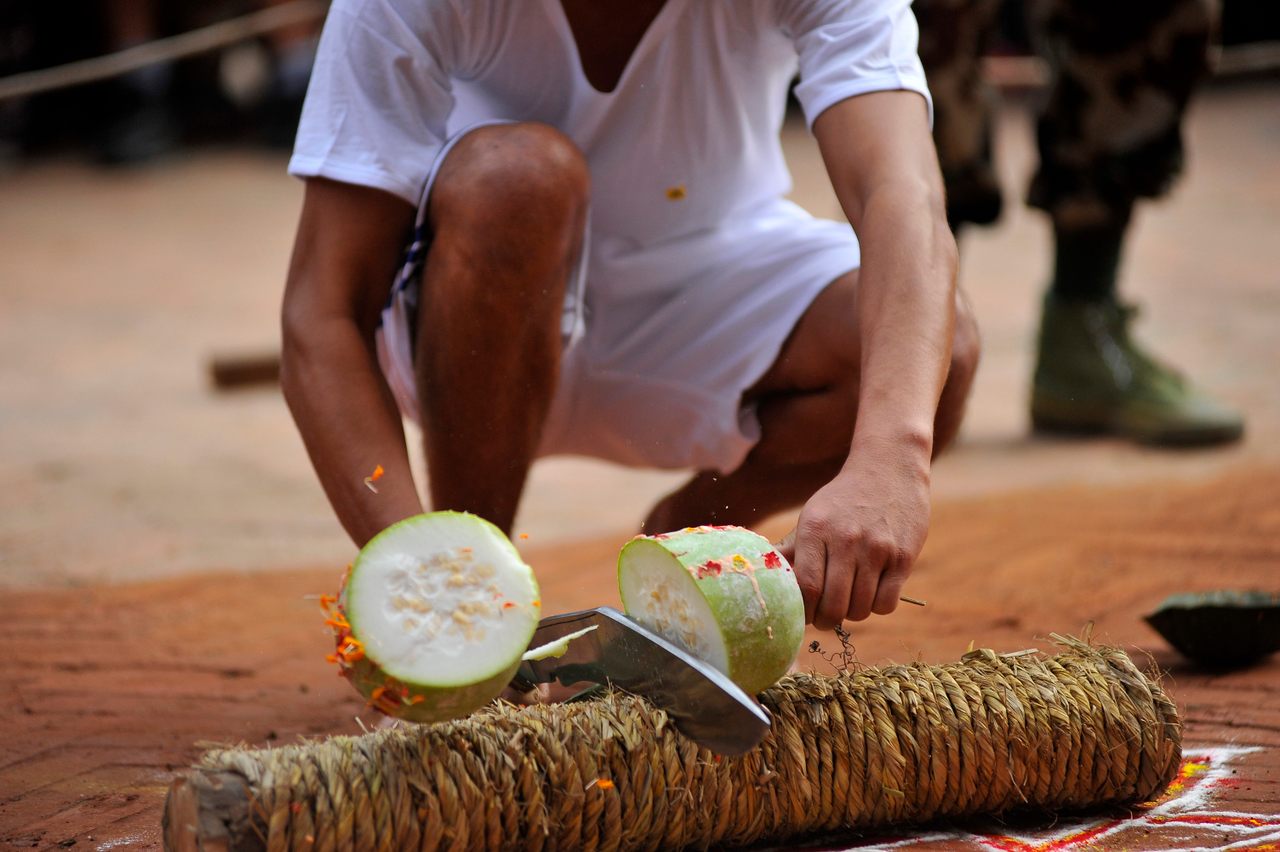 A Nepalese devotee cuts a melon on the ninth day of Dashain in Nepal. Narayan Maharjan/NurPhoto via Getty Images
In This Story
Destination Guide

When Ashok Adhikari invited me to celebrate Dashain at his family’s home in the countryside outside of Kathmandu, he had explained that it is Nepal’s “biggest festival, like Christmas is for Westerners.” On the streets, he describes holiday traditions as we pass them: oversized card games played in courtyards, towering bamboo swings used by adults as much as kids. But it is something small that catches my eye: a sliced gourd lying on the doorstep of his uncle’s house.

“That,” Adhikari explains, “was our sacrifice.”

Sacrifices are essential to Dashain, and provide the Prasad, or blessed meat, central to the festival’s main dishes. But this is also the source of growing controversy: The traditional preparation of Prasad involves the ritual sacrifice of thousands of animals across the small, mountainous nation.

Nepalis describe the spilled blood as an offering to Durga, the festival’s warrior goddess, who subsequently draws strength to overcome demons and assorted forces of darkness. While families spare cows because of their revered status in Hinduism, they herd buffaloes, sheep, chickens, ducks, and goats (known collectively as the panchhbali, or “five offerings”) that they’ve raised or purchased into temples or local courtyards. Once there, Hindu priests or family chiefs with ceremonial knives butcher them, sometimes in front of gathered crowds. But an increasing number of voices in Kathmandu is demanding another, more humane way of vanquishing demons: the sacrifice of coconuts, pumpkins, and other vegetable substitutes.

Every year during Dashain, as well as during Gadhimai, another sacrifice-based festival, which takes place every five years, animal-rights organizations distribute leaflets, plan online campaigns, and enlist local stars to encourage Nepalis to replace buffaloes with squash or coconuts. When it comes Dashain in particular, the eighth and ninth days of the 15-day festival are the most controversial.

The eighth day, known as Maha Ashtami, focuses on Kali, an incarnation of Durga whose wrath is fierce, destructive, and key to keeping the universe in motion. In the Devi Mahatmya, a sacred Hindu text, Durga fights a demon horde and is nearly overcome. Victory arrives when Kali is summoned to consume the armies of darkness whole. The animal blood, evoking fertility, is the centerpiece of an offering made in thanks for continued life, protection, and prosperity. Accordingly, the city’s men drag hundreds of buffaloes into nearby chowks, Kathmandu’s ancient courtyards, for the slaughter. This evening is known as Kal Ratri, or “Black Night.”

The next day, on Maha Navami, Nepalis celebrate another victory from the Devi Mahatmya. In the story, Durga faces off against Mahishasura, a shape-shifting demon who terrorizes the realm of the gods. The Nepali military makes its official sacrifice on this day, typically choosing a buffalo, as this was a form Mahishasura took during the battle. But other animals will do in a pinch: The defeated demons were said to hide from Durga’s wrath by (unsuccessfully) concealing themselves in the bodies of goats and birds.

Nepali activists, however, believe that animal slaughter is no way to honor the warrior goddess.

“I remember creating a scene when I was about eight and realized that a goat I used to play with was going to be killed,” says Pramada Shah, the president of animal-rights organization Animal Nepal. “What upset me even more was that the fact that the goat would be beheaded in the name of God … When I married a member of the royal family, my in-laws kindly agreed to abandon animal sacrifice and introduce the offerings of fruits and vegetables.”

While the practice of substituting vegetables has existed for years, it drew national attention after Prah and other activists organized a mass campaign in 2009. Prompted by the mass sacrifices at Gadhimai, a number of organizations united under the Stop Animal Sacrifice initiative, which demanded that celebrants “stop sacrificing animals [in the] name of God” and “celebrate Dashain without blood and meat.” For them, Durga is more than a warrior. She is also a mother, and vegetable offerings reflect the goddess’s love and care.

Still, even environmentally conscious locals make the vegetables more animal-like before the sacrifice. “Tiny sticks are inserted into the vegetable so that they resemble legs,” Basant Pokhrel, a Nepali-American who comes home for the holidays, tells me. “It makes it easier to ‘slaughter’ the vegetables.”

In families like his and Adhikari’s, the oldest parent or sibling in the room arranges the floor with ritual bowls, idols of Durga (or Kali), and knives called hasiya or aashi. They smear a red powder called abir (used in a variety of non-sacrificial Hindu rituals) in lines across the vegetable, and then sprinkle a mix of abir and rice called achetaa over everything and make offerings of water or flowers. Before the head of the family brings down the knife, everyone worships the vegetable, which often involves a moment of silence in respect or thanks.

After the ritual, the women in the family usually take the vegetable, which is now prasad, and prepare it for the following day’s feast, which celebrates Durga’s ultimate victory over the darkness. In preparation, the family’s leader takes a bowl of tika (a combination of rice, vermillion powder, and yogurt) and rubs it on their relatives’ foreheads. Everyone takes turns placing jamara sprouts behind the ears of their younger family members, money is given as a blessing, and the ceremony is complete.

For activists, this shift in the menu is actually a return to a more authentic expression of Hinduism. According to Animal Rights Nepal, in the scriptures, “nothing is mentioned of [making] animal sacrifice to appease the Gods and Goddesses, who would never approve of their own creatures being slaughtered in their name.”

And the animal-rights movement is gaining ground, with celebrities and even military leaders getting on board. Correspondingly, the number of animals sacrificed during Gadhimai and Dashain is falling. While official figures are not collected, activists such as Shah report a drop in buffalo sacrifice from 20,000 to 3,000 between the 2009 and 2014 Gadhimai celebrations. At this year’s Gadhimai, more than 100 protesters gathered, wearing masks of animals typically sacrificed at both festivals.

Though progress is steady, it is admittedly slow. More than 70,000 animals were sold for sacrifice at Dashain in 2018, reports the Nepal Livestock Traders Association. “It will be difficult to immediately stop the ancient tradition,” Mohan Krishna Sapkota of the Ministry of Culture told South China Morning Post, “but we [do not promote] such practices.”

What’s more, animal-rights activists face resistance. “People are made to believe that killing animals in a temple is a shortcut to becoming successful,” says Shah. For her, local superstitions “[stand] in the way of abolishing archaic practices such as animal sacrifice as well as witchcraft, racial discrimination, women’s suppression, and others … [Locals] feel it is better to continue the age-old traditions and be safe.”

Understandably, many livestock farmers, whose livelihoods sometimes depend on the sale of animals around the festival, oppose the activists. “It is a tradition that our fathers and grandfathers have followed and we will continue to follow this path,” says goat trader Krishna Prasad Dhangal. “We believe offering the blood to the goddess Kali will please her and bless us.”

But leaders like Shah remain confident. “We are very few campaigners, but we have a very loud voice,” she says. “We are a loud minority.” Having been loud enough to impact the menu of the country’s most sacred dinner, they’re proving that even the fight against demons can be co-opted into the wider environmental movement.

Bogs Lose Their Carbon-Chomping Powers When Roads Cut Through Them

The complex ceremonies continue, but likely without hundreds of thousands of devotees.
festivals

The Graveside Festival That Celebrates the Dead in Okinawa

Shimi, or “grave-sweeping festival,” takes place every April on the southernmost islands of Japan.
Video • PinDrop