Lockdown and the Festival Where Hindu Gods Go Into Isolation - Atlas Obscura
Want to see fewer ads? Become a Member. 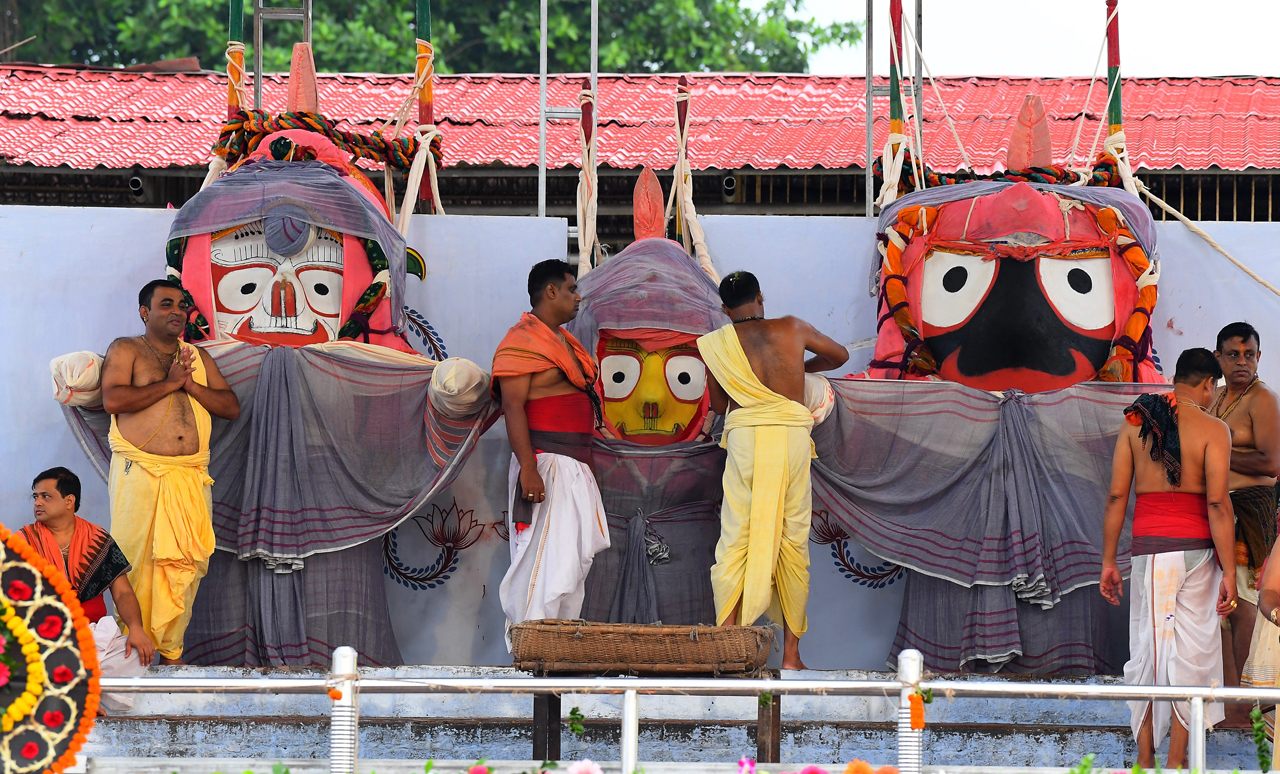 Temple attendants conduct the ritual bathing of the idols of (left to right) Balabhadra, Subhadra, and Jagannath in Puri on June 6, 2020. STR/NurPhoto via Getty Images
In This Story
Destination Guide

The permanent residents of the Shri Jagannath Temple, in the Indian coastal town of Puri in Odisha, usually have busy schedules. Every year, three idols, representing the holy siblings Lord Jagannath, Balabhadra, and Subhadra see and bless millions of Hindu pilgrims. But every June, the idols go on sick leave, a fortnight of isolation and purification before emerging again for the Rath Yatra (“cart journey”) festival, in which three 45-foot-tall chariots, one for each deity, process through the town, with an audience of hundreds of thousands (“Jagannath” is the source of the word “juggernaut”). This year, as India reels from the COVID-19 pandemic and the subsequent lockdown, most of the devotees are absent. The temple complex is quiet. Inside, however, a few priests and temple attendants are trying to ensure that the divine itinerary—illness, isolation, reemergence—is followed.

The Rath Yatra at the Shri Jagannath Temple is one of the more spectacular annual Hindu festivals, preceded by a quieter set of rituals. This year, of course, with the nature of the festival changed from public to more private, the services have changed in a way few are able to see. The rituals and traditions remain bound up with India’s caste system, which has been a source of great inequality and violence over the centuries and today, but continues to be a touchstone for the communities involved, in that it situates them in within Hindu notions of cosmic duty.

“Fifteen days before the festival the deities are in quarantine because they are unwell,” says Kirti Prakash Das Mahapatra, one of the traditional, caste-bound attendants of Lord Jagannath, also called a Daitapati.

This period, when the inner sanctum of the temple is shut, is called anasara, derived from Sanskrit word Anavasara meaning “no interval of leisure.” Worship of Lord Jagannath, lord of the universe, is thought to have its roots in tribal practices dating back to the second century, but the origins of this ritual are unknown. For the communities that nurse the deities back to health, the process is an act of cosmic hierarchy.

Mahapatra explains that 18 days before the Rath Yatra, on a full moon, the trio of idols appear in public for a holy ritual bath. After this, they are said to fall ill, and are brought to the anasara ghar, or isolation room. There, the Daitapatis are entrusted with healing the gods—in complete secrecy.

“There are usually thousands of people who attend the bathing ceremonies, but this year only a few temple attendants have come,” says Mahapatra, because many are worried about the pandemic, or thought it might mean the rituals’ suspension.

Daitapatis are on the lower rung of the ancient hierarchy of India’s complex caste system, despite their holy duties. The Indian constitution bans caste discrimation, but caste-based professions remain the backbone of temples such as Shri Jagannath.

Mahapatra, a small business owner, is among the 150 Daitapatis who annually return to the temple for anasara. They fast, avoid social engagements, and lead an austere life during this time. This year was no different for the 32-year-old, despite the lockdown.

“Jagannath is like us humans,” he says. “It is our job to cater to the unwell deities. We give them basic food, medicinal herbs and liquids, like we do to those who are ill.” That healing involves repainting the idols, among other works of maintenance. As art historians Eberhard Fischer and Dinanath Pathy note in their 2012 book In the Absence of Jagannatha, the act of repainting is an act of spiritual renewal.

Another caste, the Chitrakars, or artists, create the paintings to be worshipped in the absence of the idols—and it is the paintings and not the people that are considered pure and divine, in keeping with the general inequity and strange logic of the caste system.

A few days before the anasara, cotton cloth is glued together with tamarind paste and primed with a mixture of more paste and chalk. Paint is made with natural pigments and elephant appletree juice. In these paintings, Jagannatha is called Narayana, Balabhara goes by Ananta, and their sister Subhadra is known as Bhubaneshvari. The bejeweled sister sits in between her moustachioed brothers, and each god boasts four hands. Most prominent in each depiction is their large eyes, where the power to bless resides.

“Eyes are associated with the life of the image and the consecration is accomplished by the creation or opening of its eyes,” explains University of Copenhagen anthropologist Helle Bundgaard, who analyzed Odisha’s Chitrakar community for her 1999 book Indian Art Worlds in Contention. Historically, she found, the artists have served the temple and local kings for centuries—and serving the former continues to be a sacred duty, despite some having more lucrative opportunities for their talents. As Bundgaard explains, three factors motivate them: “Religious significance, reputation, and long-term economic interest.”

“We get together and paint day and night ahead of anasara,” explains Universe Maharana, 35, who lives near Puri in the artist-village of Raghurajpur, which has 200 Chitrakar families. “Since this is a collective process, we don’t sign the work. That’s not allowed in our community.”

The painting takes place in homes or workshops across Odisha, following ritual cleansing of the spaces. Women are allowed to prepare the surfaces, but not paint them. The chief painter can ask other male family members for help, but at the cost of hosting a feast. The compensation from the temple doesn’t cover the costs of the rituals, but the Chitrakars’ belief that painting the anasara, even a single brushstroke, guarantees entry to heaven ensures their participation every year. This year, however, few will obtain this honor, thanks to physical distancing measures.

Maharana is a successful artist outside of his sacred duties, but for many Chitrakars the temple is their only source of income. Select families are granted the right to paint temple murals, Rath Yatra carts, and anasara triptychs. The honor this bestows extends beyond the spiritual.

“Journalists and people come to take photographs of anasara paintings, and that exposure can translate to some economic gain later on,” says Bundgaard.

Once the anasara paintings are complete and mounted, the Chitrakars focus on the biggest job: the three massive carts of the Rath Yatra.

“Around 40 to 50 of us paint the rath,” says Maharana. “Each part of the cart has a name and motifs of dancing figures, animals, and birds.”

The raths are less carts than mobile temples, pushed by people and devotion, on 14 giant wheels each. After the festival, the carts are dismantled, and used as firewood for the temple kitchen and to light the funeral pyres of devoted Chitrakars.

Unlike the anasara, rath construction is a public affair. The main street leading up to the temple is choked by wood piles as temple attendants fashion the cart, watched by guards. The priests also grant families exclusive rath rights based on caste.

Despite COVID-19 concerns, some carpenters, florists, tailors, ironsmiths, and painters have worked on the rath in 2020, Maharana says. But, in a strange parallel, by ensuring that the gods emerge from their quarantine, these artists and craftspeople will be subject to their own two weeks of isolation, to much less fanfare. Maharana is not among them.

“If I participate, I won’t be able to see my family for the duration of the ritual, after which I will be quarantined in a government facility to make sure I haven’t got COVID-19,” he says. “Only those who are absolutely required will go, even the Rath Yatra may not have many people, which will be so strange and unprecedented.” Indeed it hasn’t. And it sounds like it will be strange. As of June 15, according to IndiaTV, the idols are in their period of isolation, and temple authorities are trying to craft a plan for their June 23 emergence, which may involve thousands of COVID-19 tests, and heavy machinery and elephants pulling the carts—with no crowd of devotees.

These traditions anchor the spiritual worldview of Chitrakars, Daitapatis, and other temple attendants, so they are glad that the rituals are proceeding, even if few will see them.

“The gods have to emerge out of quarantine,” Mahapatra says. The parallels between pandemic isolation and the isolation of the gods is tempting, but it only goes so far. The religious idea of quarantine remains restricted to purity and pollution, not public and personal health.

But in a bid to encourage more than 45 million Odiyas to self-isolate, the state government made the comparison between COVID-19 lockdown and anasara, according to news reports. Residents hope that there will be a joyous emergence soon.

“Jagannath is god. How can he stay in isolation forever?” says the artist Maharana. “I hope we can get out of this prolonged isolation, too.”

It's a competitive team sport.
temples

The tradition of building and preserving the sacred spaces is both art and science for the <em>sthapati</em> lineage.
monks

One of the many traditional dances at the annual Jambay Lhakhang Drup involves performers in masks—and nothing else.
Video

6:12
Want to see fewer ads? Become a Member.
From Around the Web
Atlas Obscura Trips
Delhi and Rajasthan: Colors of India
View This Trip
Thanks for sharing!