The Graveside Festival That Celebrates the Dead in Okinawa - Atlas Obscura
Want to see fewer ads? Become a Member. 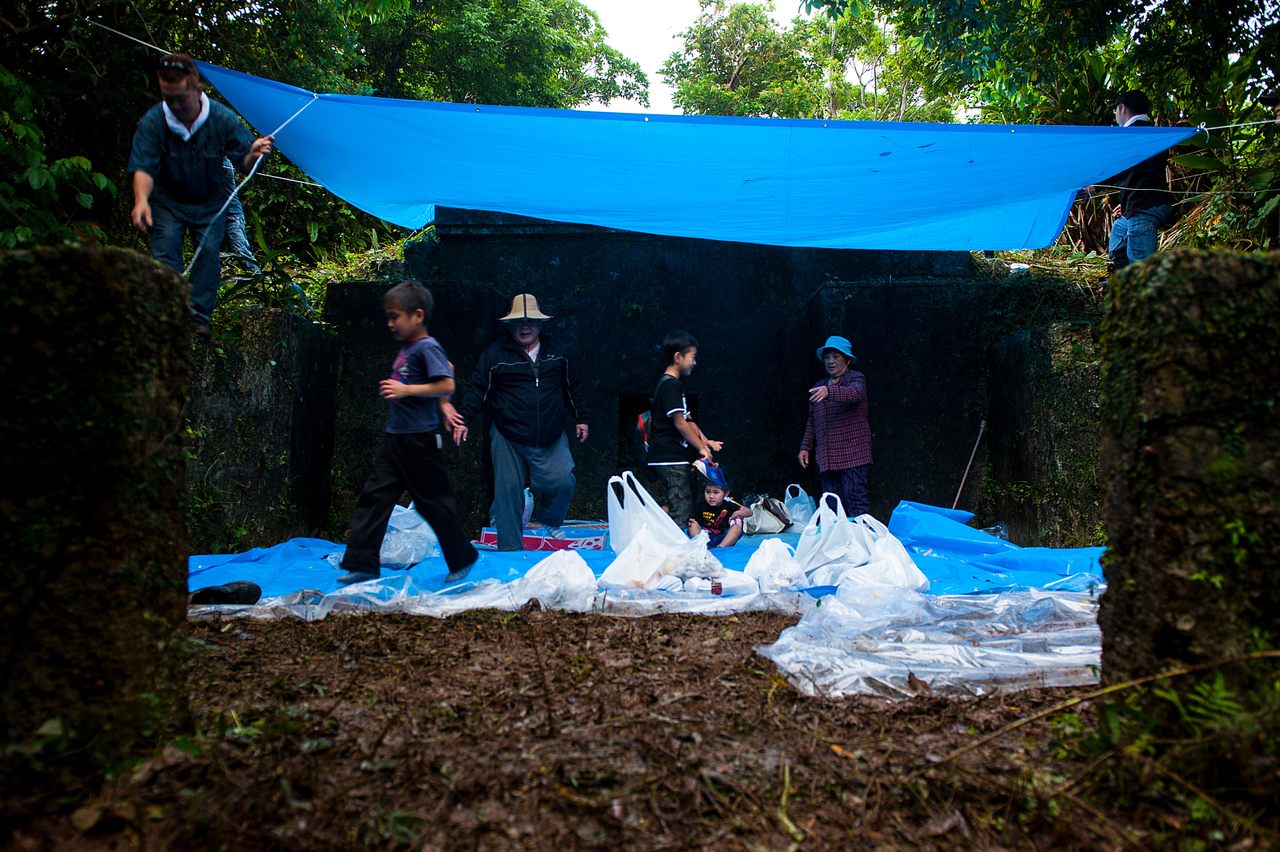 An Okinawan family prepares to pray and offer food to their ancestors for the annual Shimi celebration in 2016, at Kadena Air Base in Japan. Since before World War II, tombs have been located on what is now the base. Alamy/U.S. Air Force/Corey M. Pettis
In This Story
Destination Guide

This past April, families across Okinawa gathered as they do each spring at island cemeteries for a lively graveside party. Family members sat under canopies and on blue tarps, laid out neatly in small courtyards in front of family tombs. Children dashed around the crypts, while the adults laughed and ate elaborate meals prepared for the occasion. Even in famously festive Okinawa, the cheerful sight was striking in a space usually thought of as solemn.

But it was a party with a purpose. Known as Shimi, or Seimeisai—“grave-sweeping festival”—it is an annual event each April held across the islands in the farthest southern reaches of Japan. Locals gather at family tombs to give offerings to the spirits of their ancestors, and to celebrate with song, food, and drink. It is an Okinawan tradition that reflects the islands’ eclectic heritage: a mixture of Japanese, indigenous Ryukyuan, and Chinese cultures that form a unique custom in the region.

The practice of Shimi in Okinawa dates back centuries, to when the islands were still the independent Kingdom of the Ryukyus, according to Okinawa’s Ryūkyū Shimpō newspaper. The event bears a striking similarity to the Chinese Qingming Festival, appropriate given Okinawa’s historic trade ties with China.

Originally, Shimi was limited to the islands’ royal family. The first Shimi ceremony of the year, kujinu-shimi, still takes place annually on the island of Izena, home to one of three Ryukyuan Royal Mausoleums, according to the Okinawan Times. But the practice gradually spread through Okinawa, says Professor Masato Ishida, a philosopher at the University of Hawai’i’s Center for Okinawan Studies, in an email. “Japan’s modernization after 1868 removed the distinction between the elite class and commoners,” Ishida explains.

Observed on the Sunday closest to the 15th day of the third lunar month, April, Shimi mixes the solemn and the celebratory. Like the practice of Obon, which the rest of Japan observes in August, Shimi begins with family members gathering to sweep and wash the ancestral tomb, and provide offerings to the dead. Island fruit and alcohol, especially the distilled island spirit known as awamori, are popular choices, as are favorite dishes of the deceased. Grocery stores across Okinawa, Ishida writes, make a concession to modern life: they sell colorful pre-made hor d’oeuvres in the week leading up to Shimi. Families burn black incense and ceremonial paper money, known as uchikabi, to provide for ancestors’ well-being in the afterlife.

“The dead in Japan thirst,” writes Mark Rowe, a professor at McMaster University and expert in Japanese funerary practices. The spirits of the deceased demand rice, water, sweets, and incense, but most of all, Rowe says, they seek conversation, attention, and remembrance. In a phone interview, Rowe explains the political and cultural origins of Japan’s modern attention to the dead. As part of Japanese modernization efforts in the late 19th and early 20th centuries, he says, the nation relied on “the idea of the family as the basic unit of the state,” with the Emperor as a symbolic “father” to these patrilineal, multigenerational households.

On the religious front, Rowe cites traditional concepts of duty, family identity, and Confucian ideas of obligation to one’s parents that drive the veneration of ancestors. “Ancestors are always present,” Rowe says, noting that in many households in Japan, it is common for rooms to be adorned with photographs of one’s deceased relatives. Grave-sweeping rituals in Japan, he goes on, are more than a social expectation. The ritual serves as a “precursor” to ceremonial offerings of food and incense. “Spaces of the dead reflect the spaces of the living,” he says, and graves can serve as an extension of the home.

With respects duly paid back on Okinawa, families break out coolers of their own food and drink for a graveside celebration, with plenty of laughter and traditional island music played on the sanshin, Okinawa’s version of the three-stringed shamisen.

For one Okinawan resident, who asked to be identified by her last name, Asato, Shimi is a familiar ritual and an opportunity to reconnect with family, both living and deceased. “We gather with our extended relatives, including cousins, for a picnic at the family grave,” Ms. Asato says. In her experience, the family burns black incense next to the offerings of food. “We say to our ancestors, ‘douzo tabete kudasai’: please eat,” she explains. When the incense smoke rises, it is believed to be the ancestors partaking in the offering. “After the incense smoke is gone,” she says, “we say to our ancestors, ‘We will also eat,’ and begin our own meal at the grave.”

Tombs that are unique to Okinawa are purpose-built for this occasion. As described in the Japan Times, islanders traditionally preferred kamekobaka, or “turtleback” tombs, but many now celebrate at Haka tombs, shaped like small homes. Both styles contain the bones and ashes of the deceased, and feature courtyards at the mouth of the burial vault, specifically designed for hosting Shimi celebrations. Professor Isihida describes the courtyards as “a space of communication across many generations, including ancestors.”

Turtleback tombs originated in China, but evolved to be larger and include a courtyard when they came to Okinawa in the 16th century. The turtle-like shape has also come to represent different meanings in China and Okinawa: Turtles were a sacred symbol of ancient China, but in Okinawa, writes academic James C. Robinson, the turtleback design is thought to represent a mother’s womb.

Within the tombs rest families’ ancestral remains. In Okinawa, the body of the deceased was traditionally left in the tomb to desiccate before family members cleaned and stored the bones. In modern times, and in keeping with the default practice of cremation in the rest of Japan, Profesor Ryoko Shiotsuki of Nihonbashi Gakkan University notes that more and more Okinawans are filling family crypts with urns.

Tombs in Okinawa are far from one-size-fits-all, depending on who occupies its space. Massive communal graves can accommodate the remains of thousands of residents from a particular town or family, while large, jointly-owned tombs can be shared among close friends and their families. Smaller tombs, known as monchu, may fit the extended family on the paternal line, and are typically inherited by the eldest son. The most modest in size are only for immediate family.

In Okinawa, the Shimi festival represents the strong connection between islanders and their ancestors. While venerating the spirits of the deceased is common in Japan’s Buddhist and Shinto traditions, Okinawa’s religious history also skews towards the spiritual and animistic. Shimi “honors” ancestors in one traditional Shinto sense, Professor Ishida says, but in Okinawa “it is more about feeling and appreciating the lively presence of ancestors than worshipping them from a distance.” The islands embrace a mix of religious traditions, Ms. Asato points out. “The ancestor is the closest guardian deity,” she says.

And nobody is quite sure why.
festivals