This Ship Is Not Sinking—It's Flipping for Science - Atlas Obscura
Want to see fewer ads? Become a Member. 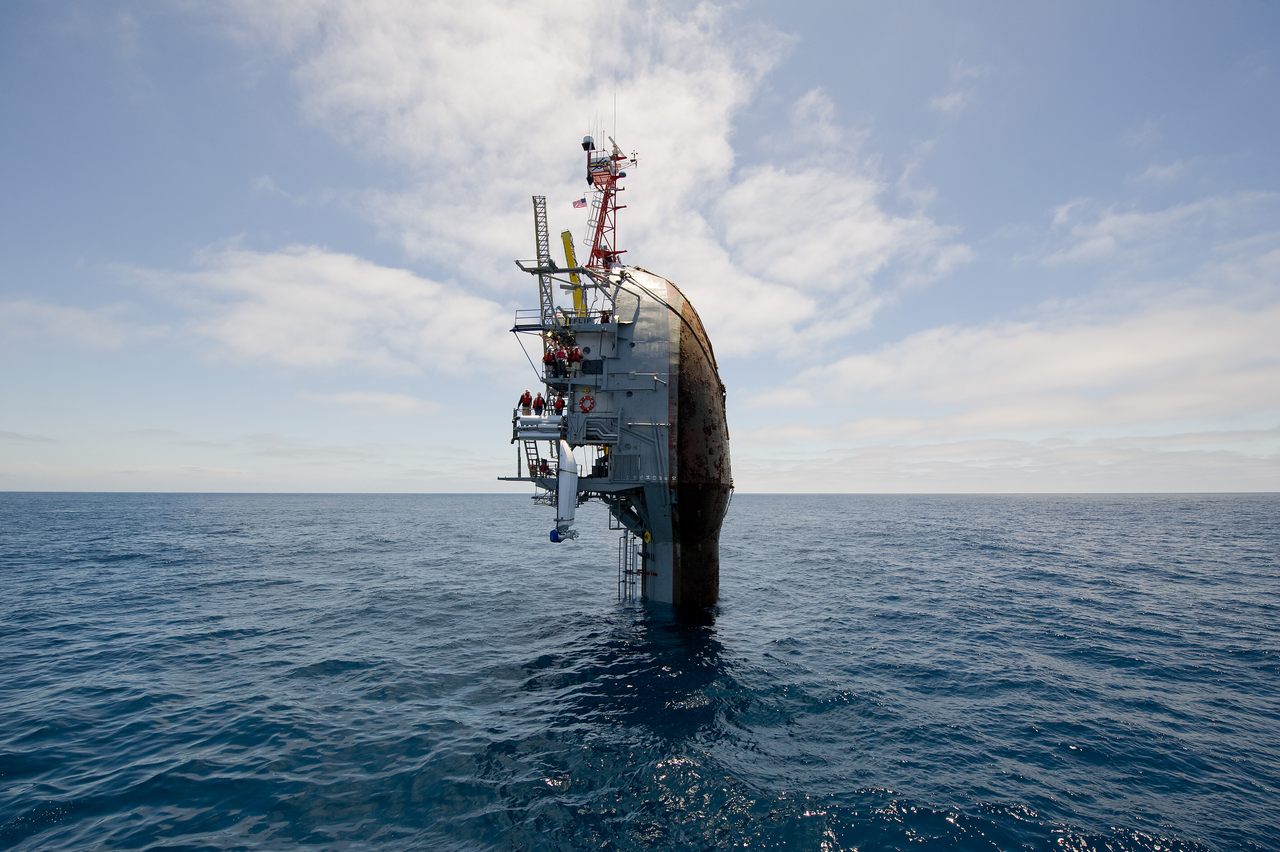 FLIP in action. Office of Naval Research/CC BY 2.0

The United States research fleet is made up of dozens of vessels, large and small, that take scientists out to sea to collect data on the ocean and climate and marine life, and most of them look like regular old boats or barges. But not the Research Platform FLIP, short for Floating Instrument Platform. It looks like the bow of a regular boat, chopped off and tacked onto end of a submarine. FLIP lives up to its name; it’s designed to do what no other boat does without sinking—flip a full 90 degrees by submerging 300 feet of its hull and leaving just 55 feet of bow above the water. The result is a quiet, stable platform for precise scientific measurements at sea.

This unusual purpose affects every part of the boat’s design, including the quirky and cramped living quarters, which must work for life in two orientations. Despite this, or perhaps because of it, FLIP is a favorite among the researchers who spend weeks aboard. “It was built in the decade that people were trying to reach the Moon and so thinking big was on everyone’s mind,” says Robert Pinkel. Pinkel is a professor emeritus at Scripps Institution of Oceanography at the University of California, San Diego, and has been using FLIP for research nearly as long as it has been in service. The platform, which is technically known as a “spar buoy,” was designed and constructed in 1962 to conduct research for the U.S. Navy on how ocean conditions affect acoustics.

The ship’s creators likely didn’t expect FLIP to be so popular. The original designs were built on the assumption that scientists would board the platform each day to do research, then return to a “mothership” at night to sleep. “Very quickly, it became clear that nobody wanted to go back at night because FLIP was not only more comfortable, but it provided a good platform for working 24 hours a day,” says Pinkel. “When things were working, you didn’t want to leave your experiment to go back to a mothership.” So bunks for 16 people were soon installed—wherever there was room—and now scientists spend weeks at a time on the platform.

FLIP isn’t exactly a ship; it doesn’t have engines of its own, so it must be towed out to sea, laying flat like a boat, before it can sit up. Researchers ride along, making do with awkward furniture arrangements until the big flip. “All of the rooms, basically, are on edge, waiting to come to life when they’re in the vertical,” says Pinkel. “The amount of useful space that you have once you’ve flipped suddenly triples.”

The flip takes about half an hour. When the platform reaches its planned research site, the long, thin spar is filled with water, and that end begins to sink, thrusting the bow high into the air. “You go from being 5 feet above the ocean to being 30 feet or 40 feet up in the course of the very last two minutes while it’s taking its Titanic dive,” says Pinkel. “A big concern is if everything isn’t stowed correctly, things will fall off shelves, and so to minimize any chance of danger, we all stand outside on the working decks and hang on out there.”

Once the ship is flipped, and the seasickness and disorientation subside, it’s time for the scientists to get to work. “FLIP would be enormously fun if you didn’t have a job to do,” says Pinkel. Instruments and computers are turned on and begin collecting data from sensors placed all over. Today the platform is used for a wide array of projects. Pinkel, for example, has focused on slow-moving waves that propagate in the interior of the ocean, below the choppy surface. Because FLIP doesn’t have engines below the water, it’s a quiet place, and its flipped configuration is stable, even in 30-foot seas. Pinkel’s colleague, John Hildebrand, has used FLIP to monitor the vocalizations of whale populations, while others listen to some of the smallest animals in the ocean—plankton. The platform can shut off its generators and run on electrical power from batteries for short periods of time so scientists can hear the faint Doppler effect of the microorganisms moving toward or away from the ship.

As research budgets shrink, and fewer people go into oceanographic research, it’s hard to say what is on the horizon for FLIP. “The future of FLIP is totally determined by the future of people in science,” says Pinkel. “FLIP has been a kind of quiet resource for the country for 50 years and it’s not so much the ship, but that the next generation of people who are willing to use it—that’s what hangs in the balance.”

No one was sure about the size of these almost-mythical wildlife events—until we got it all on camera.
science

From war to exploration to pleasure cruising, pets have often accompanied us on the oceans.
science