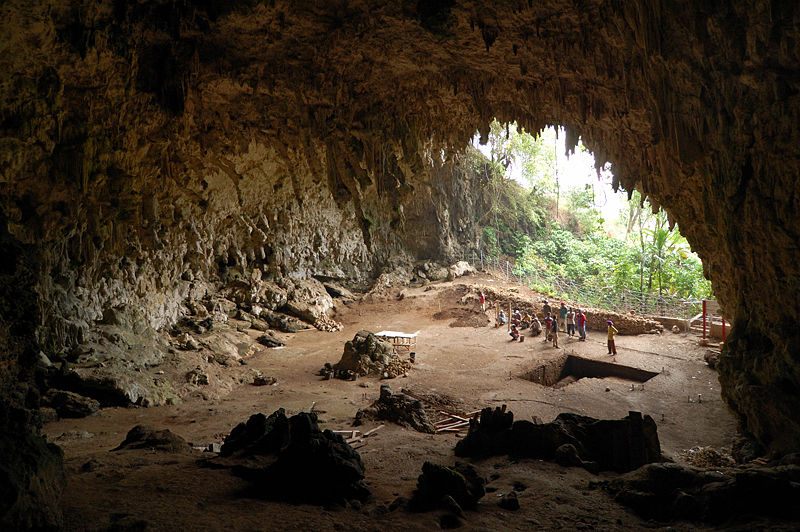 The island cave where the remains of Homo floresiensis were found. Rosino // CC BY-SA 2.0
In This Story
Place

The specimen known as LB1 caused a stir in 2003, when its tiny skeleton emerged from a cave on the Indonesian island of Flores. The little human, dubbed the “hobbit,” was from an extinct species, but the discovery (along with the remains of several other individuals) added an entirely new twig to our family tree—Homo floresiensis. Scientists have since examined everything they can about our diminutive cousin, from its potential diet to its ancestry—as a possible descendant of Homo erectus. For example, it turns out they may have lived as recently as 50,000 years ago—around the same time modern humans were arriving in Australia. The latest development is that researchers have run thousands of computer simulations to determine when—and how quickly—H. floresiensis evolved, and it turns out it happened pretty fast.

Many things on Flores grow very big and very small, an example of what is known as “Foster’s Rule,” or the “island effect.” A combination of fewer resources and the lack of natural predators on many islands mean that over time their smaller flora and fauna tend to balloon in size, while species that are larger on the mainland tend to shrink. This is offered as an explanation for why birds way taller than Big Bird once roamed New Zealand, and elephants the size of Mini Coopers meandered on some Mediterranean isles. The island of Flores hosts two of the most striking examples: the massive Komodo dragon (a giant monitor lizard), and H. floresiensis.

“Islands are special,” says Pasquale Raia, a paleontologist at the University of Naples Federico II and coauthor of the study, which was published in The Royal Society’s Biology Letters. “Morphologically and culturally speaking, evolution in other hominids was nowhere close to this.”

Raia’s team took a number of the evolutionary forces related to the island effect into consideration, and plugged them into a computer simulation, to see how quickly H. erectus might have miniaturized. Raia was surprised by the results, which suggested it could have happened in less than 10,000 years, just a few hundred generations—a sprint compared to the glacial pace often associated with evolution.

Raia says the results should be taken with appropriate caution, given how weird islands can be, evolutionarily speaking. “Island ecosystems are fragile,” he says. “Besides that, islands often stretch the limits of what we think adaptation can do.” Just ask the finches of the Galápagos, which are evolving quickly more or less all the time.

Archaeologists test how our ancestors may have used this (nearly) lost skill to navigate caves and other dark spaces.
Video • PinDrop