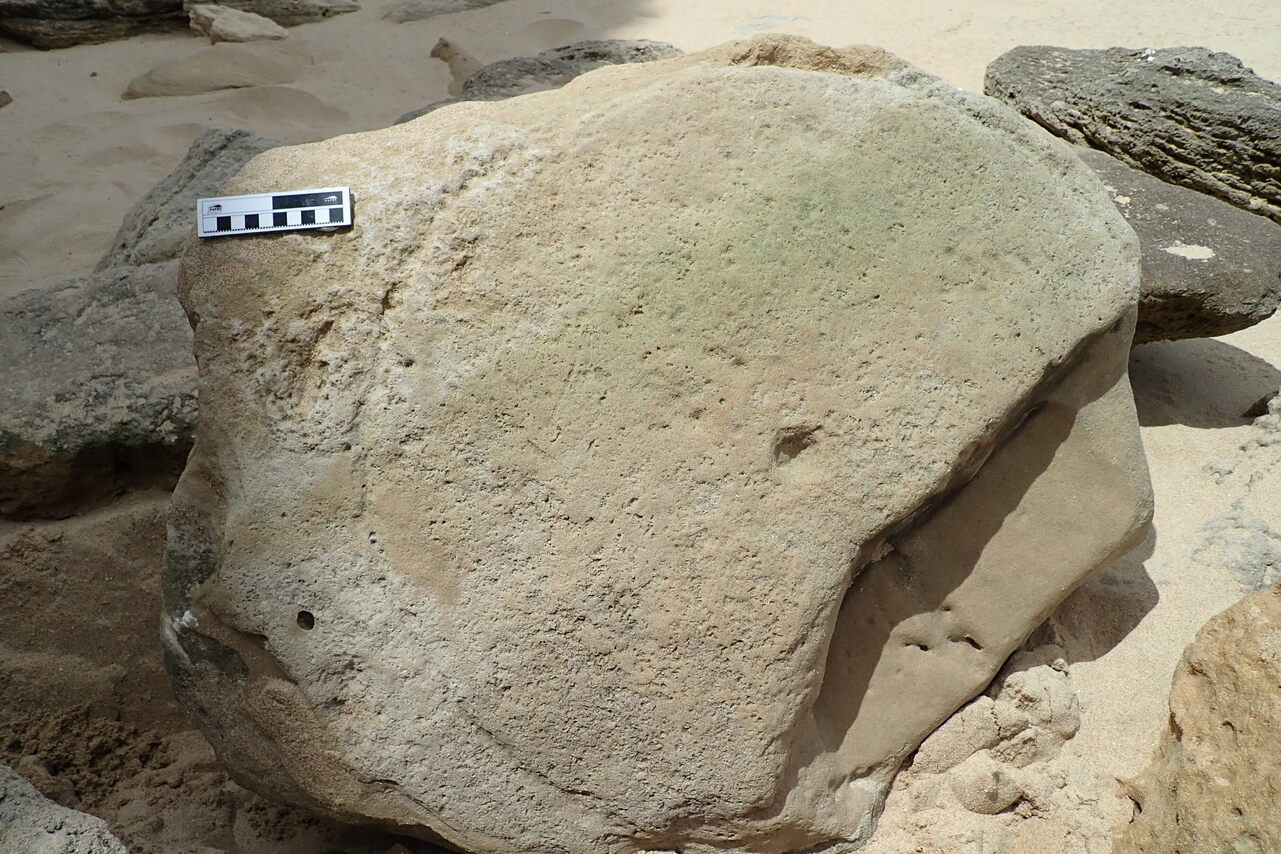 One fossil depicts a near-perfect circle in the sand, with a point in the center. Jan de Vynck
In This Story
Destination Guide

Fossils always happen by accident; there was never a mammoth that wandered out onto the steppe and died, knowing it was going to emerge from a farmer’s field some day. The same is true for trace fossils, or the remains of prints or trails or burrows that animals leave behind. Early humans, squelching wet the sand through their toes, could never have imagined we’d be counting them today.

Now, on the Cape South coast of South Africa—which is home to one of the best-documented collections of small pieces of Pleistocene art—researchers have uncovered some trace fossils that appear to be anything but accidental. These fossils seem to have been drawn intentionally by early humans, including possible sand sculptures that date to over 100,000 years ago. If their hypothesis about the finds is true, the researchers might even have stumbled upon the first known example of humans depicting animals. Everyone is thrilled—cautiously, cautiously thrilled.

“What we are describing is potentially of great importance and unprecedented,” says Charles Helm, a paleontologist at the African Centre of Coastal Palaeoscience and the lead author of a study documenting these markings, published in September in Proceedings of the Geologists’ Association. “Absolutely certainty is elusive,” he qualifies, but at least a few of the finds seem to be turning heads. “Some may be doubtful, but there are certainly also some that can only have been made by humans,” Robert G. Bednarik, a rock art expert who wrote a comprehensive survey of Africa’s Pleistocene paleoart in 2013 and was not involved with the research, wrote in an email.

The first known examples of what we think of as human art were created on permanent materials—rocks, cave walls, shells—and go back hundreds of thousands of years. But human art may have originated earlier on perishable materials, such as wood and sand, writes anatomist Gillian M. Morriss-Kay in a 2010 paper in the Journal of Anatomy. “We simply cannot know how much art was created in perishable materials and has therefore been lost to the archaeological record,” Morris-Kay writes.

Helm’s team has been thinking about perishable materials for years, as it trawls the beaches on the coast near Cape Town for ancient footprints that were made in sand and naturally preserved. The Cape South coast also teems with aeolianites, prehistoric sand dunes and formations that turned to rock as far back as 158,000 years ago. Though it seems ephemeral, in rare cases sand can actually make quite a lasting impression, especially when dry sand settles over moist sand, Helm says. His team has identified more than 140 vertebrate track sites on the Cape South coast.

But the fossils they’ve just described don’t seem like tracks, human or animal. At certain sites, Helm and his colleagues noticed recurring motifs, such as circles, cross-hatches, zigzags, and parallel lines, all made into sand that hardened into stone. These patterns all occur in other examples of paleoart, suggesting a human origin, Helm says. But simple patterns can also be caused by natural phenomena, so the researchers were careful to focus on trace fossils that displayed multiple levels of symmetry or combinations of patterns. “A hashtag pattern is hard to explain other than as a random assortment of grooves that happens to resemble examples of paleoart from the region,” Helm says, adding that there is, ultimately, no way to prove the marks are not random or natural. The researchers also noted whether the marks were found in close proximity to any other suggestively human traces, which could indicate a budding Pleistocene artist (or toddler).

With great caution and admitted uncertainty, Helm’s team has keyed in on several fossils that they believe must have been made by humans. They’ve even coined a new term for the phenomenon: an ammoglyph, which derives from the Greek ammos, meaning “sand.”

In Helm’s eyes, the smoking gun, if there is one, is a drawing made in the sand that consists of a circular groove with a depression smack-dab in the middle. The circle is nearly perfect and flanked by a pair of oval indentations that the researchers believe might have been made by prehistoric knees. They posit the circle could have been drawn with a forked stick, planted in the sand and spun around like a compass. “The traces associated with ‘markings’ are more interesting and could have a varied origin, including what they propose,” Matthew Bennett, a geologist at Bournemoth University who studies ancient hominin footprints and was not involved in the study, writes in an email. “Doodling with your spear point in the sand is a perfectly human thing to do.” In Helm’s eyes, it is their “most compelling example.”

The researchers considered other, more natural origins of the imprint, such as a frond or leaf stuck in the sand that scraped the circle out on a windy day, or that it might have been etched into the stone much more recently. But a frond would not have made such a consistent groove, and the knee-troughs suggest that the pattern was made before the sand had petrified. “I’m especially intrigued by their interpretation of knee impressions caused by kneeling,” says Anthony Martin, a trace fossil expert at Emory College, who was not involved with the study. But Martin says the possible knee prints would be much more convincing if they were attached to a trail of footprints, which is not present.

The team documented several other ammoglyphs that, while perhaps more exciting, are certainly harder to prove as having a human origin. In one sunny spot on the coast, the team noticed large, round tracks that likely belonged to an extinct buffalo. After returning to the site on an overcast day, they noticed several dark lines—barely visible in the sunlight—that form an isosceles triangle with two lines extending beyond the corners of the shape.

One interpretation is that it could be a crude representation of a long-horned buffalo, but some caution is warranted. “It was simply a matter of seeing an unusual shape beside a probable trackway of this extinct species,” Helm says. “This is by no means conclusive, just intriguing and the sort of example we hope other researchers will examine and provide insights on.” Helm acknowledges that his team is indulging in speculation. Martin says this is one of the few studies he’s seen on trace fossils (officially called ichnology) in which the researchers openly admit that what they’re seeing might be wishful thinking. “Ichnology is a discipline that is especially susceptible to pareidolia, ‘seeing’ the familiar in natural phenomena that might have nothing to do with what is there,” he says. “So my hat is off to them for [admitting] that.”

“It is hard to be definitive about these sorts of things, but they make a strong case with some excellent data and visuals,” Bednarik says, adding that he hopes future researchers offer their own critiques, whether to support or disprove Helm’s claims. In some cases the researchers have done this themselves, with one intriguing example credited to a cluster of seals—scientifically significant, but not human.

The most visually exciting and questionable trace fossil is a sand sculpture that seems to resemble a stingray. The cartilaginous fish occur frequently along the Cape South coast. The “putative stingray rock,” in Helm’s words, has an intriguing symmetrical shape, with a number of aligned grooves along what could be a spine that suggest the dorsal surface of a stingray. The rock also has a “bite” shape at the bottom, a possible indication of where a tail was once attached. “A random feature cannot be fully eliminated, no matter how improbable this may seem,” Helm says. “A stingray sculpture is, frankly, far removed from anything we expected to find, but the likeness was readily apparent. And plausibly this creature may have been of significance to our ancestors on this coastline.”

While Helm and his team await sample results that will provide a more precise age for the rocks, they continue to hunt for more artful traces in the sandstone. The day after Helm was interviewed for this story, he emailed to say that his team has stumbled upon another ammoglyph. He says he’s quite sure what it is, but he won’t say until the image is thoroughly documented. When it comes out, he’d like everyone to weigh in.

The reptilian critters may not have survived, but they made sure to sign off feet first.
turtles

Researchers have found Pleistocene-era proof of a human, mammoth, and ground sloth trundling along.
Video

9:58
Want to see fewer ads? Become a Member.
From Around the Web
Atlas Obscura Trips
Wildlife Conservation and Contemporary Culture in South Africa
View This Trip
Thanks for sharing!