The Rush for Ramps Is Threatening Millennia-Old Foodways - Gastro Obscura 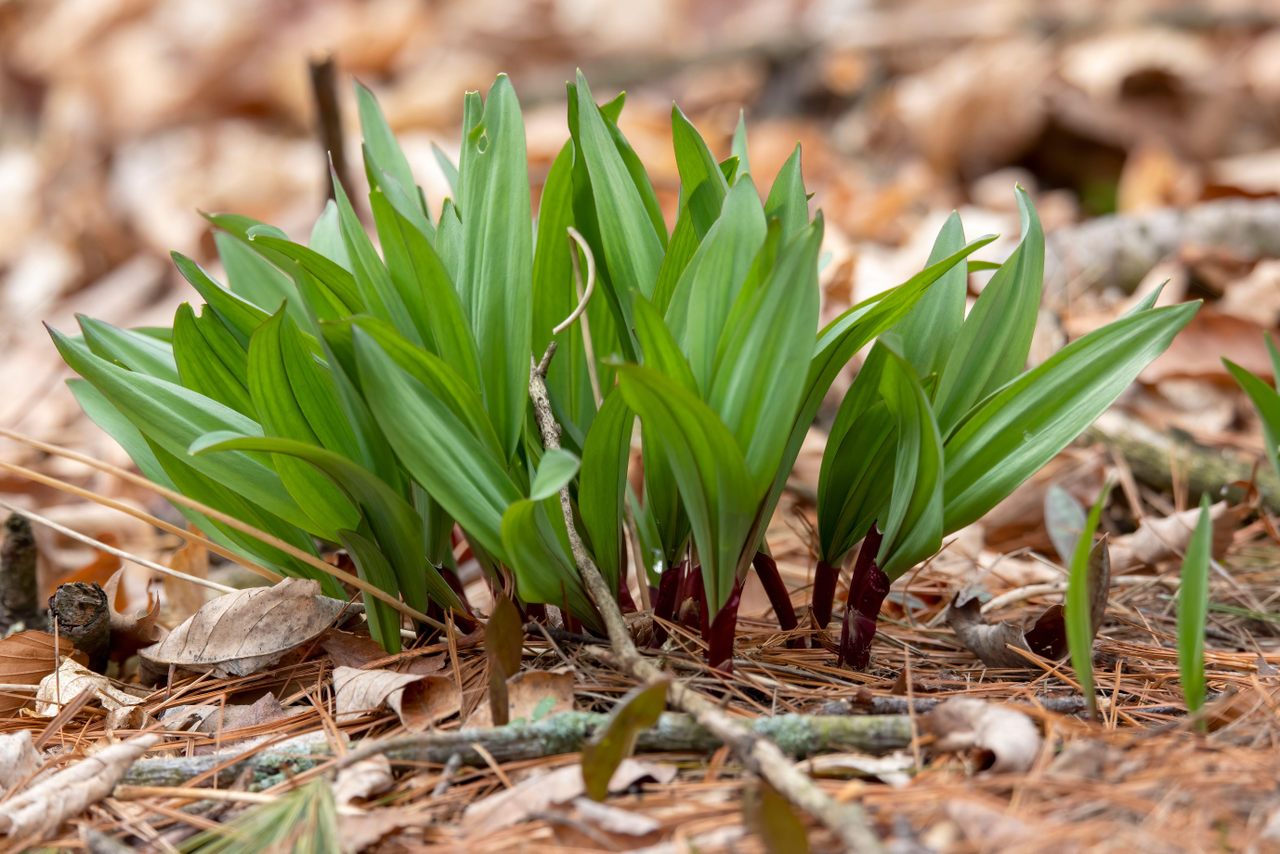 Nova Kim is on the hunt: for morel, for fiddleheads, and, these days, for wild ramps.

On dirt roads, Kim and her partner of 41 years, Les Hook, prowl the Vermont woods. The Indigenous gatherers are 78 and 77, hailing from the Osage and Abenaki nations respectively. Kim can’t walk so well anymore, so she drives. Hook rides in the passenger seat of their sea-green Prius, the needle of the speedometer hovering around 5 mph. The windows are rolled down, and their eyes comb the quiet stretches beside dirt roads.

“You’re speeding,” Hook teases Kim for driving along at a zippy 8 miles an hour.

“When you’re a collector, you develop a slow patience,” says Kim. She calls their excursions collecting, gathering, wildcrafting, hunting, but never foraging, a term she avoids.

When collecting, you have to look for what sticks out, what is out of place. You are prepared to gather whatever presents itself. Kim jerks the car to a halt so Hook can scramble out and scoop up a morel he’s spotted.

In late spring, ramps grow on Vermont slopes that are touched by the morning light, or along the bend of a road where turkeys cross. Often they grow on the oxbow of a river, like the Winooski, whose name roughly translates from Western Abenaki as “Onion Land,” according to Alexander Cotnoir, a citizen of the Nulhegan Band of the Coosuk Abenaki Nation. Ramps are in the wild onion family, which are called winos in the Western Abenaki language. The word comes from wini, which means unassured, because patches can move over time. From one year to the next, they don’t always come up in the exact same location. Where they do come up, the leaves fold open and emit the faint smell of onion if you scratch the surface of their light-purple stems.

Ramps are in season, and the chefs who Kim and Hook supply are buying: $4.50 for a baker’s dozen. Wild plants have become wildly popular with diners, and none more so than ramps, which have become a perennial favorite on trendy restaurant menus. But for Indigenous gatherers like Kim and Hook, ramps aren’t a new trend, but a part of the landscape that has always been their homeland.

Hook started gathering when fishing with his father; the two foods would always go together, the greens flavoring the fresh fish. For the Abenaki, as for other tribes in areas where ramps grow, the plant is a spring tonic, used for coughs and colds. Ramps are among the first greens to emerge in the spring.

The soups, stews, and pestos that they flavor have long been a welcome variety after long winters of dried meats. In the Great Smoky Mountains, the Cherokee have long held a great spring feast and ramp festival. The ramps are not just food; they are a part of ceremony, spirituality, and medicine. In 2007, Kim recalls, the National park Service prohibited the Cherokee from gathering ramps. The prohibition has since been reversed, but it was one in a series of harmful restrictions that kept Indigenous people from the land.

Like the plants, Kim’s path took her across a fair swath of the country before she made Vermont home. Growing up on a ranch in Wyoming, she hunted, fished, and trapped, but never collected plants. You never wanted to get caught doing something a Native did, says Kim.

Her parents had moved to Wyoming to escape the violence unfolding on the Osage reservation, which sits on oil-rich land. The wealth was shared among tribal members, but it also unleashed a slew of violence, with outsiders coming to the reservation and killing tribal members for their land rights. Kim’s grandmother was murdered by her husband. Then her father was chased out.

Kim’s parents chose Wyoming because they thought they could pass as non-Native there. They hid their identity to stay safe. “You didn’t go around and advertise that you were Native,” says Kim. Kim’s father was fired from his job at the ranch when they learned he had hired Native people to work there.

Kim started learning about plants in earnest after she met Hook. She had a series of heart attacks, and with her health deteriorating, she lost her will to live. The summer she was suicidal, she and Hook planted a garden. The garden kept her hands and mind busy thinking about creating new life, not ending it.

While Hook’s half of the garden was neat, Kim’s half was wild. “What I really grew were weeds,” she says.

“The one thing I learned from my Native tradition was don’t waste anything,” she adds. And so she figured out how to use all of it—a process that entailed poring over books and learning from Hook’s knowledge of wild plants inherited from his father.

That summer, Kim tended the garden, and Hook tended her. It was the combination of the garden and his constant attention that saved her life.

Life is both delicate and resilient. With the increased demand from restaurants and grocery stores, more people are gathering ramps, and not everyone knows how to do it sustainably. Entire patches of ramps have been ripped up with no regard for next season or the next generation.

A recent report by the Great Lakes Indian Fish and Wildlife Commission found that wild ramps, called zhigaagawanzhiig in Ojibwe, have been depleted in much of the eastern United States. Historically, the plants have grown throughout the hardwood forests of the northeastern United States and into Canada, as far south as Tennessee, and west into the Great Plains. The report finds that commercial harvesters, who dig up entire patches, are doing much of the damage, spurred on by spikes in consumer demand. Habitat loss from clearcutting and land development further threatens wild-onion populations, which could be exacerbated by competition from invasive species.

But Indigenous gatherers have always known another way.

For Kim and Hook, that means not allowing the chefs they supply to place orders for specific plants. The chefs receive what the gatherers can sustainably harvest in a given week.

“If everybody wants the same thing at the same time,” Kim says, “it puts too much pressure on the plant.”

Kim and Hook hope to spread this way of thinking among chefs and foragers—a word that Kim hates. The term dates to the 12th century, when landowners used it to describe poor vagabonds who took indiscriminately from the land, stripping it of anything and everything edible. For Kim and some other Native harvesters, the term still carries negative connotations about class and relationship to the land. The “landowner mentality” is still a problem that Kim and Hook encounter when people are unfriendly and aggressive to gatherers.

Another Abenaki gatherer, Kat Pelletier, told me that the word foraging was so violently negative that it is comparable to rape. Gathering, in contrast, is like making love: a reciprocal act. An act that can give life to both people and plants.

With the right approach, says Hook, “You can benefit almost anything you’re picking.” Pruning plants in the right place can prune them for growth. For plants whose seeds are nestled in the leaves, harvesting the plant spreads the seeds and leads to new growth. In the 70-some years that the two have been gathering wild plants, they have learned how often they can return to a site to gather, how much they can take without harming the population.

Some of it depends on the weather, or how well a particular plant is doing. Hook describes thickets of ramps exploding in parts of the woods where they’ve never grown before. But in order to benefit the plant, you have to take care of what you’re harvesting: taking only a few ramps from a patch, covering the roots so they stay intact, protecting a patch from grazing animals, educating others about how to harvest ethically. It’s a reciprocal relationship that comes with the responsibility to care for the plants.

Those are elements that too many modern gatherers are missing. When Kim and Hook encounter a place where over-harvesting has occurred, they try to educate local gatherers about ethical practices. Soon, they hope to expand those efforts by teaching from the home they recently purchased. Vermont harvesters are also discussing a certification process, although Pelletier is skeptical about the state controlling who can gather, especially if it means that Indigenous people would need to register. For now, she’s praying that no one will find the bigger sites she frequents.

“I’ve seen too many places that have been destroyed,” she says.

Still, some secret patches remain, tucked far up on the sides of scraggly hills. Out of sight, they live a life of their own.

“Plants are all magic,” says Hook. “If you get to know a plant, you love it automatically.”

For Hook and Kim, that love has lasted a lifetime.

Join us for a daily celebration of the world’s most wondrous, unexpected, even strange places.
onionsnative american cuisineforaged foodsindigenousnative americansfood

Treasured by the Tohono O’odham, saguaro fruit appear only in the Sonoran summer.
hospitals

A state-spanning network of volunteers powers the program.
food

While credit for the dish is widely shared, here’s how to choose ingredients that celebrate its Indigenous roots.
Video • Wonder From Home

Pick up a kebab and a credenza at this unique combination furniture store and café.
Waterbury, Vermont

The sweetest graveyard in the world is filled with headstones for dearly de-pinted ice cream flavors.
Genoa, Nevada