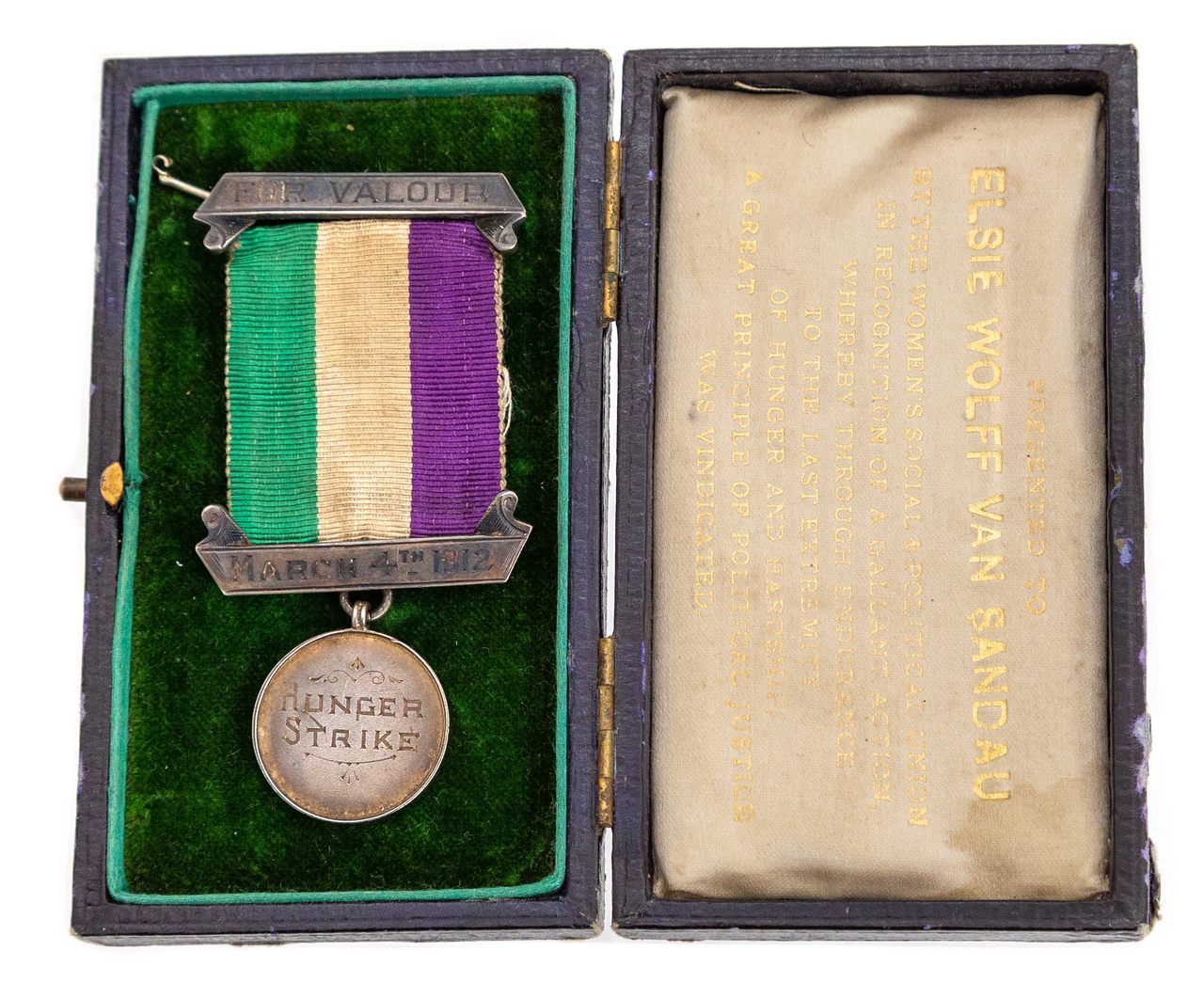 Elsie Wolff Van Sandau's medal in its original case, as it was found in the drawer. Courtesy Hansons Auctioneers

Two English sisters recently discovered a piece of British political history simply sitting in a drawer—a forgotten testament to the suffering endured by British women in their campaigns to secure the right to vote.

On March 4, 1912, the British Women’s Social and Political Union awarded Elsie Wolff Van Sandau a medal “in recognition of a gallant action whereby through endurance to the last extremity of hunger and hardship great principle of political justice was vindicated.” Wolff Van Sandau had been arrested for allegedly smashing a window in London’s Covent Garden area as part of a suffragist protest, and she subsequently undertook the hunger strike which the medal recognizes. More than 100 years later, the medal turned up in its original case inside an ordinary bureau drawer as Anne Alford and Joan Woolman were cleaning out their father’s home. On June 27, 2019, Hansons Auctioneers in Etwall, England, sold the medal for £12,500—or nearly 16,000 U.S. dollars. The price far exceeded Hansons’s estimate of £7,000-10,000.

Before the 1912 Covent Garden incident, Wolff Van Sandau had previously been arrested in November 1910 on what came to be known as Black Friday. On that day, about 300 women marched to the House of Commons to protest the failure of a merely incremental bill, which would have granted voting rights to women who owned property worth more than £10. Many of the women suffered police brutality and sexual violence from police outside the House of Commons. The suffragette Georgiana Margaret Solomon addressed an account of the day to Winston Churchill, who was then the Home Secretary, in which she wrote that the suffragettes faced a “relentless engine of physical force—the Metropolitan Police—an instrument under the control of the Government, presumably in your Department.” Solomon boldly held Churchill directly accountable, writing that the police were “the irresponsible, obedient tools of the Government,” and that blame for the violence therefore “lies upon the shoulders of those who hold this national force at their disposal.”

The British suffragist movement, however, still had a long road ahead of it from Black Friday. In 1918, some women aged 30 and over were granted the right to vote while all men 21 and over were granted suffrage. It wasn’t until 1928 that all women and men aged 21 and over finally shared voting rights in the United Kingdom—nearly a full decade after the United States had adopted the 19th Amendment. This year marks the 100th anniversary of the United States Congress passing the amendment, which officially became law the following year in 1920.

Anne Alford, a 64-year-old retired receptionist, said in a statement that she remembers seeing the medal as a teenager in the 1970s, when two great aunts were living with Alford, her sister, and her parents. Alford and Woolman’s great aunts and parents have since passed away, and the sisters don’t know how Wolff Van Sandau’s medal came into their family’s custody. “I’ve done as much research as I can about Elsie,” said Alford, “but how our family came to own the medal is something of a mystery.” She wonders if her great aunts knew Wolff Van Sandau or were themselves involved with the suffragist movement. The mystery may never be solved, but the medal will always testify to the extraordinary sacrifices of ordinary people making history all around us.

A century ago, women picketing the White House were beaten and imprisoned for demanding their right to vote.
museums

Dorothy wore the disputed blue-and-white frock when she faced down the Wicked Witch.
music

Tim Claydon collected each and every No. 1 record released between 1952 and 1992.
Video • Wonder From Home