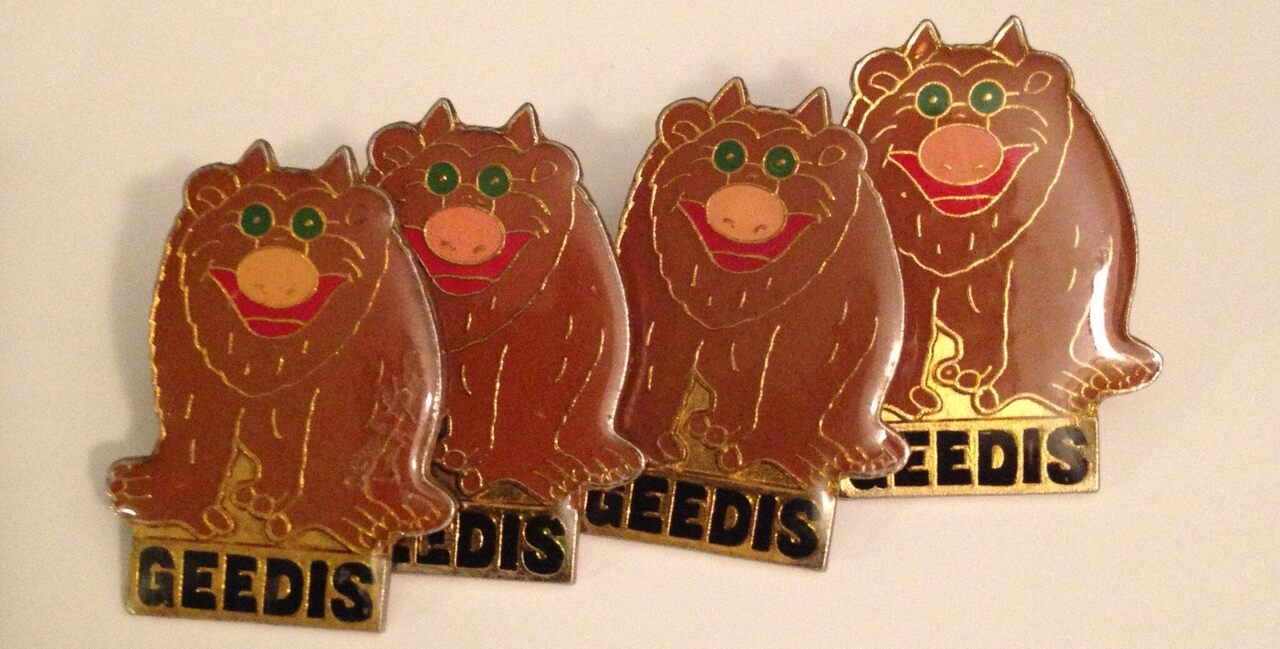 The true meaning of Geedis may be the mystery of our time. Nate Fernald/Used with Permission

As so many fantasy quests do, this one starts small, with a simple, if emphatic, question:

WHAT THE FUCK IS GEEDIS? I found this old pin. Google has no answers. Please help. I’m losing my mind. pic.twitter.com/Wf9ltPS4wD

“I was looking for a pin of the band The Jam,” explains the comedian Nate Fernald, author of the above tweet and writer for The Late Late Show with James Corden. “I came upon this eBay seller who had thousands and thousands of pins from the ’70s and ’80s, and I went down this weird rabbit hole. I bought a whole bunch of them, because they were old and weird and made me laugh.”

“I didn’t really think about it at first, but then it just kept popping in my head, like, what [is] that?” says Fernald. After turning to Google for info on the character and coming up empty, he says the mystery of Geedis became even more alluring. “The more obscure the thing became the more it made me laugh, and the more I had to own it. Then I bought it and became more obsessed with it.”

After purchasing the pin, Fernald contacted the seller to see if they knew anything more about it, but they didn’t have any information about Geedis either. He eventually found three more copies of the pin, and reached out to the sellers of each one. None of them could speak to the origins of Geedis.

Fernald turned the question over to social media, with his tweet of the Geedis pin on June 21. “Most of my friends went insane trying to figure out what it was,” he says. Nothing much came of it until he sent out a second picture of his growing Geedis collection on August 1. Finally, someone on Twitter pointed him to a picture of a sheet of stickers featuring a detailed illustration of Geedis, as well as additional characters, labeled “The Land of Ta.”

The sticker sheet, which was originally posted on the Flickr page of a pop culture collector (who Fernald says also knew nothing of its backstory), features an assortment of characters. In addition to Geedis, there is Harry, a bald, red-skinned troll holding an eagle-headed snake; Tokar, a golden robot that looks like a murderous version of C-3PO, and Iggy, some sort of dopey goblin soldier… thing.

After Fernald posted the stickers to his Facebook page, a couple of other sticker sheets that appeared to be from the same series turned up. One sheet is labeled “Women of Ta,” and features variations on the well-worn fantasy theme of absurdly-busty-female-warrior-monsters. Taken all together, the designs and character names seem to hint at some lost or forgotten fantasy franchise. “In my ideal world, I would find a VHS tape of a single episode of The Land of Ta,” says Fernald.

According to the small print on the sticker sheets, The Land of Ta stickers were created in the early 1980s by the Dennison Company, which is today known as the adhesive label company Avery-Dennison. They produced a wide variety of stickers and “seals” in the early 1980s, ranging from sheets of zoo animals to holiday-themed assortments.

Other than that, Fernald has been able to discover almost nothing about Geedis or The Land of Ta. There don’t seem to be any other products out there that use the characters, or The Land of Ta. Images of the stickers are only found in sale listings or buried in the outer corners of the internet’s image databases. Fernald theorizes that maybe The Land of Ta stickers were the beginning and end of Geedis and his (its?) life. “Nerd culture is so good at archiving,” he says. “The fact that there is so little information as there is on The Land of Ta is proof that it wasn’t a comic book, or a TV show, or even a game.”

But if Geedis and The Land of Ta never existed as anything more than a brief run of weird stickers, that brings us back to original enamel pin. “Where does the pin come from? Because I can’t find any Dennison pins anywhere,” says Fernald. In the 1980s, creating a set of custom enamel pins wasn’t quite as breezy as it is today, so it seems likely they must have been mass-produced by someone, to meet some demand. So far, there doesn’t seem to be evidence of either scenario. “That’s a lot of work to make a bootleg pin of something no one wants,” says Fernald.

The search for the truth of Geedis is far from over. Avery-Dennison has not immediately responded to either Fernald’s or Atlas Obscura’s requests for comment, but Fernald hopes he can get their attention on Twitter, with the ultimate goal of locating the artist or artists behind the stickers. Failing that, he jokes that maybe he can just start producing bootleg Geedis merchandise until someone sues him. At least then he’d have some answers to the question that started it all. Or maybe there’s an ending that’s even more like something out of an ’80s movie.

“My dream is that when all of this is said and done, this leads me to The Land of Ta.”

If you have any further information about Geedis or The Land of Ta, contact us at info@atlasobscura.com.

A melting glacier revealed the frozen hands and feet of a man who disappeared in 1987.
fantasymonstersmystery

Where to Find the World's Best Hometown Monsters

Here are 25 places to see yetis, sea monsters, Sasquatch, and other cryptids.
festivals

They're either scaring away Old Man Winter or the Ottoman Empire.
medieval

The story of Calafia reveals the surprising complexity of medieval attitudes about race.
television

The characters in the acclaimed horror drama fight both monsters and white supremacy.
Want to see fewer ads? Become a Member.
From Around the Web
Travel With Atlas Obscura
Are you a curious traveler?
Join local experts in 50+ destinations for a once-in-a-lifetime journey.
View Our Trips
Thanks for sharing!