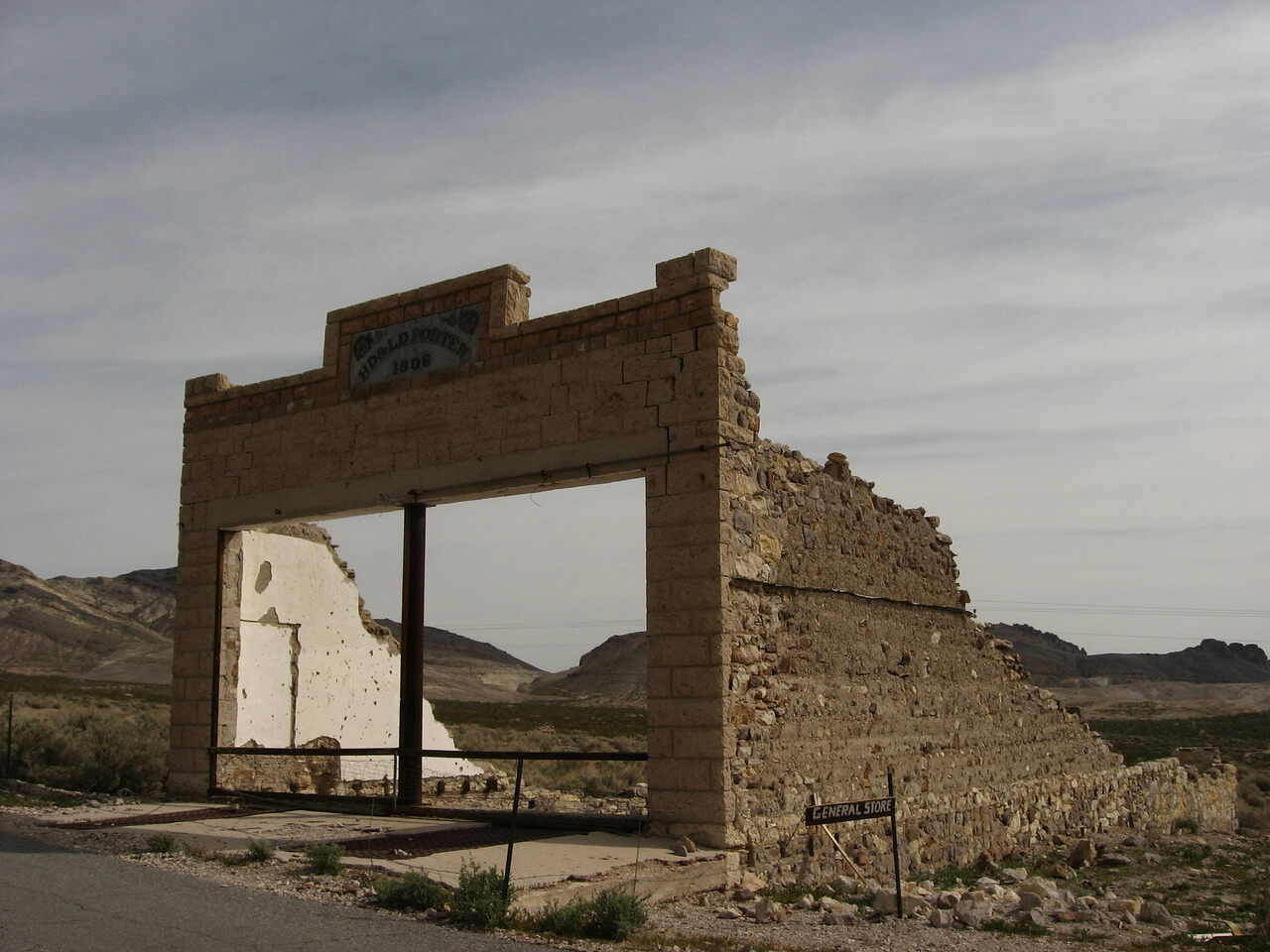 The ruins of a general store in Rhyolite, one of Nevada's better known ghost towns. Ken Lund/CC BY-SA 2.0

During the 19th century mineral rush that earned Nevada the nickname “the Silver State,” boom towns popped up left and right across the desert. Unfortunately, only a few survived. The rest were abandoned. Houses, schools, saloons, hotels, general stores, and mines were left to deteriorate amidst the tumbleweeds.

Fortunately for adventurers, many of these ghost towns have survived into the 21st century, albeit a little worse for wear. Here are six eerily empty ghost towns in Nevada awaiting your exploration.

Like many Nevada ghost towns, Belmont was a silver boom town. It was founded in 1866 and it grew fast: Within two decades it was a full-fledged town. It was the seat of Nye County, and it had a music hall and a hotel named the Cosmopolitan. But Belmont’s good fortune didn’t last. The silver mines were tapped out and the shifting prices of minerals left the town unable to keep up economically. By the early 1900s the town was already on its way to being deserted.

Perhaps because of its intense though short-lived success, Belmont’s buildings are surprisingly well preserved. The courthouse, a saloon, and a couple of mills are still standing, while portions of other buildings remain. The little ghost town hidden in the shadow of the Toquima Mountains has won some admirers. A restoration group is working on preserving the ruins while a period-authentic bed and breakfast has opened for business on what used to be Main Street. Further down the road is Dirty Dick’s Saloon, a recreation of the town’s first bar.

St. Thomas was founded by a tiny group of Mormon settlers in the 1860s who believed they were proving ground in Utah. When both the settlers and the state realized that they were in fact in Nevada, the government brought down taxes on the residents, including owed taxes from previous years. Unable to fork over the gold the state was demanding, the town was abandoned in 1871. It was inhabited off and on over the following decades, but when the Hoover Dam was built a new lake emerged from the rising waters of the Colorado River, which completely drowned St. Thomas.

Today, after rampant water consumption has drastically lowered the level of the lake, the remains of St. Thomas are beginning to surface. Building foundations and chimneys are beginning to rise above the water, reminding visitors of the town that once was.

Nelson was once the site of the scandalous Techatticup Mine. An area rich in gold, silver, copper and lead, the land was mostly settled by Civil War deserters, and was the site of one of the largest booms the state of Nevada ever encountered. Its seedy population coupled with land disputes made for many fights, many of which ended in murder. This bloodshed coupled with frequent flash flooding from El Dorado Canyon left Nelson uninhabitable before long.

What remains of Nelson lies above the flood channels, a few scattered ranch houses, the remnants of a Texaco station, and the standard weather-torn buildings and machinery. Used as the location for many photo shoots, music videos and several films, the site features one unusual spectacle of a small aircraft seemingly smashed nose-first into a dune. The plane is not a true relic, but a fabricated wreck from the 2001 crime film 3000 Miles to Graceland.

Anson Phelps Stokes was a wealthy railroad magnate who poured his money into development and infrastructure in the desert outside Austin, including this castle, the most lasting piece of his legacy. The three-story structure was commissioned by Stokes in 1896. It was modeled after an Italian tower and constructed from local granite. In its heyday, the tower was lavishly decorated; each floor had a fireplace, and the Stokes family could look out over their surrounding land from two balconies and the battlement terrace on the roof.

The Stokes reign, however, was short. The family traveled west in 1897 and spent about a month in the castle. It would be their only visit. A little less than a year later, embroiled in an embezzlement scandal and the silver mine’s decline, Stokes sold both the mine and his brand new castle. It lay abandoned for many year  until it was purchased by a distant relative in 1956. Now listed on the National Register of Historic Places, the idiosyncratic tower endures, not quite like anything else you’ll see along an American roadside.

Unionville’s story is that of so many boom towns. It grew quickly in the decade after the Civil War during a silver rush, then declined just as quickly when the mines dried up. As such, many buildings in the hamlet of Unionville appear frozen in time, unchanged since when they were abandoned in the 1870s and ’80s.

Visitors come to gaze upon the cabin Mark Twain once lived in and leave but the scant residents of Unionville (there are roughly 20) assure there is lots more to be found in the surprisingly lush valley. There is a B&B in town, and apparently fish are plentiful and neighbors are friendly.

Gold Point (also known as Lime Point and Hornsilver at different points in its history) was more successful than other mine towns, operating prolifically even through the Great Depression until World War II called for a halt on nonessential mining. After this the town was largely deserted, and would have been left for dead if not for Herb Robbins, a Las Vegas wallpaperer who visited Gold Point and fell under its spell. He and a friend each purchased homes for sale in town, later convincing others to do the same. After winning big in Vegas, Robbins was able to practically purchase all of Gold Point. He set about restoring buildings to open them to the public, all while simultaneously acting as fire chief and sheriff.

Visitors can stop by Gold Point and stay awhile. The cabins, though beaten by time on the outside, have been beautifully restored and filled with precious antiques on the inside. The sheriff will be happy to regale you with stories of its history illustrated by his 9,000 photos of local mining history. Proper “miner’s breakfasts” are provided and if you’re lucky, there might even be a gunfight while you’re in town. Staged, of course.

Remarkable points of interest across the Silver State.
Sponsored by TravelNevada
outsider art

There are strange and beautiful creations in the desert and beyond.
Sponsored by TravelNevada
atom bombs

Echoes of the hundreds of nuclear tests conducted in Nevada during the atomic age.
Sponsored by TravelNevada
nature

"Sky islands," secret caves, and naturally-grown bonsai trees are only a glimpse of what Nevada has to offer.
Sponsored by TravelNevada
Video • PinDrop

11:23
Want to see fewer ads? Become a Member.
From Around the Web
Thanks for sharing!