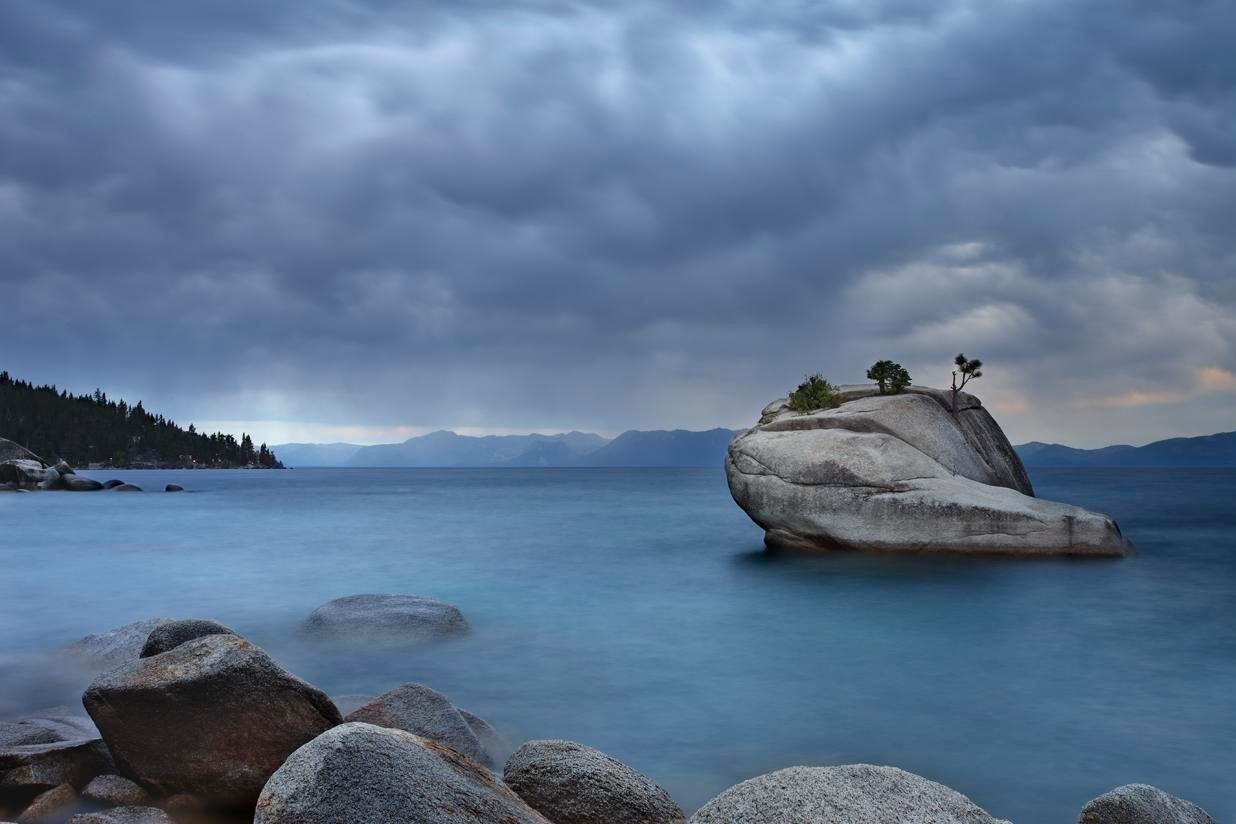 Nevada is known for its gorgeous deserts, but there’s so much more to the western state. Early explorers of the Spanish Territory were blown away by the magnificent colors of Nevada’s scenery, and wrote much about the beauty of their surroundings. Mark Twain spent a piece of the early 1860s writing in Virginia City and in Roughing It, waxed poetic on rugged canyons, silver threads of river, and lakes flaming in the desert. “At rare intervals—but very rare—there are clouds in our skies,” he wrote, “and then the setting sun would gild and flush and glorify this mighty expanse of scenery with a bewildering pomp of color that held the eye like a spell and moved the spirit like music.”

Luckily, great swathes of that “mighty expanse of scenery” look much as they did back then, and as they have for hundreds, even thousands of years.

This lake earned its name from the conical stone formations that can be seen rising from the still waters. The limestone tufa formations were exposed when a larger ancient lake receded. Today they are not only scenic, but some of them are also home to a rare breed of pelican. The surrounding waters are also teeming with fauna—they are home to the ancient Cui-ui fish and the largest species of cutthroat trout in the world, the Lahontan Cutthroat. The scenic lake is also the setting of numerous local ghost stories, from lore about drowned babies to tales of vengeful mermaids.

The Spring Valley mountain range’s elevation is so great that it is referred to as a “sky island,” where the ecosystems at different elevations vary wildly based on each climate. Each level of elevation supports a different kind of vegetation and wildlife, some of which is unique to Nevada. At the base of the mountain range, it’s mostly desert plants and scrub brush. Move a bit further upwards and it becomes gray blackbush scrub, which eventually gives way to a dense green conifer forest at the peak.

The vistas of Valley of Fire Park are just as dramatic as its name, which comes from the red sandstone formations that glow as if on fire when the sun’s setting rays hit them. But people have been admiring the beauty of Valley of Fire for a very, very long time as evidenced by the petroglyphs that dot the rocks all over the park. Some of the art dates to around A.D. 300, but it is believed the Anasazi inhabited the valley as far back as 300 B.C. In addition to these natural and archaeological wonders, the valley boasts an assortment of wildlife, including roadrunners, coyotes, jackrabbits, and desert tortoises, just to name a few.

The natural wonders of Nevada don’t only exist above ground, they’re underfoot too. Underneath Great Basin National Park you will find miles of magnificent cathedral-like chambers. These caves were discovered in the late 1880s, though there is evidence that they were previously used as a burial site for American Indian tribes. In the following decades, Lehman Caves became the setting for weddings and parties.

You can still see graffiti from these times on some of the cave walls (in the aptly named “Inscription Room”). Some of the signatures are written in charcoal, while others are carved into the stone. The caves are now protected and preserved as part of Great Basin National Park. However, even the damage to the cave represents more than a century of human interaction with the site.

You would never guess it now, but 10,000 years ago, the desert of Nevada was home to the 8,500-square-mile Lake Lahontan. Today, 90 miles east of Carson City, Sand Mountain is a modern remnant of that ancient lake. As wind blew across the empty lakebed, the sand accumulated near a basin that stopped the wind. Stretching across the Nevada desert, the giant dune is two miles long and 600 feet high, but that’s not the only unique thing about it. It’s also musical. As wind blows across the top, the sand’s movement creates an eerie, whispery hum. This rare ringing phenomenon can only happen under precise conditions: a particular sand shape, a particular humidity level, and a particular concentration of minerals.

This refuge is one of the most isolated in the contiguous United States, and as such it is home to animal populations, birds in particular, that aren’t found anywhere else. The largest group of canvasback ducks outside of Alaska nests here, and as protected areas become increasingly scarce, deer, antelope, grouse, and other animals find shelter in Ruby Valley. The territory is varied and representative of Nevada’s many environments (it’s not all desert): there are mountains, plains, lakes, marshes, and even hot springs.

The mirrored waters of a Lake Tahoe are expansive enough that there are secret wonders hidden throughout. One of them is Bonsai Rock, a boulder with four tiny trees growing from the top.  Unlike the deliberate fine tuning and precise pruning required for tended bonsai, these trees have been pruned by a the force of scarcity. They’ve defied the odds of survival by thriving on a diet eked out from their rocky, nutrient-deficient natural container.

There are strange and beautiful creations in the desert and beyond.
Sponsored by TravelNevada
abandoned

The abandoned treasures of the Silver State.
Sponsored by TravelNevada
atom bombs

Echoes of the hundreds of nuclear tests conducted in Nevada during the atomic age.
Sponsored by TravelNevada

Remarkable points of interest across the Silver State.
Sponsored by TravelNevada
Video • PinDrop

4:14
Want to see fewer ads? Become a Member.
From Around the Web
Thanks for sharing!