Why Did the U.S. Government Amass More Than a Billion Pounds of Cheese? - Gastro Obscura
Want to see fewer ads? Become a Member. 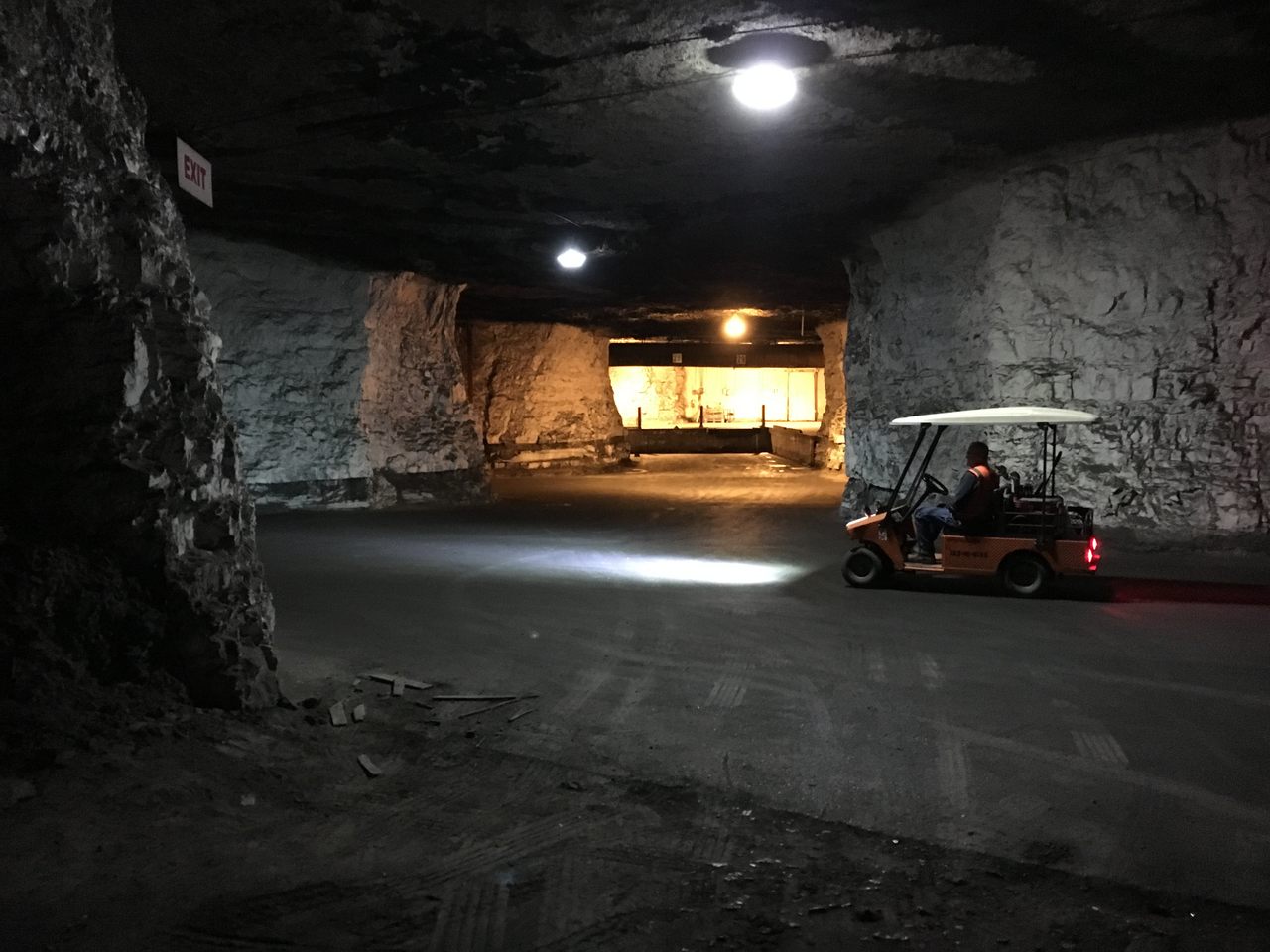 THIS ARTICLE IS ADAPTED FROM THE MAY 21, 2022, EDITION OF GASTRO OBSCURA’S FAVORITE THINGS NEWSLETTER. YOU CAN SIGN UP HERE.

The year was 1981, and President Ronald Reagan had a cheese problem. Specifically, the federal government had 560 million pounds of cheese, most of it stored in vast subterranean storage facilities. Decades of propping up the dairy industry—by buying up surplus milk and turning it into processed commodity cheese—had backfired, hard.

The Washington Post reported that the interest and storage costs for all that dairy was costing around $1 million a day. “We’ve looked and looked at ways to deal with this, but the distribution problems are incredible,” a USDA official was quoted as saying. “Probably the cheapest and most practical thing would be to dump it in the ocean.”

Instead, they decided to jettison 30 million pounds of it into welfare programs and school lunches through the Temporary Emergency Food Assistance Program. “At a time when American families are under increasing financial pressure, their Government cannot sit by and watch millions of pounds of food turn into waste,” Reagan said in a written statement. The New York Times declared that the bill would “give poor Americans a slice of the cheese surplus.”

But the surplus was growing so fast that 30 million pounds barely made a dent. By 1984, the U.S. storage facilities contained 1.2 billion pounds, or roughly five pounds of cheese for every American. “Government cheese,” as the orange blocks of commodity cheese came to be called, wasn’t exactly popular with all of its recipients.

As strange as this predicament might seem, the U.S. is far from the only country to artificially stabilize agricultural prices by stockpiling food products. China props up pork prices by buying surplus for its frozen pork reserve. When maple syrup supplies run low, Canada taps into its strategic reserve. And the European Union has a long, scandalous history of accumulating “butter mountains,” “wine lakes,” and “milk lakes”—the latter of which consisted of vast quantities of skim milk powder housed in warehouses in Germany, Belgium, and France.

So how in the world did the U.S. end up with a mountain of slowly molding cheese?

“Like so many things in American public policy, this traces to the New Deal, but actually goes even a little bit before that,” says Andrew Novaković, a professor of Agricultural Economics at Cornell University. “It dates back to a time when farmers were having a tough time in the 1920s and ‘30s and a growing feeling that the government should help.”

In the early 1900s, the growing availability of refrigerated transport allowed dairy farmers to sell their product on an unprecedented scale. To do so, however, required a serious upfront investment. “Since that requires capital, the dairy industry starts consolidating,” says Andrea Wiley, author of Re-Imagining Milk. “Basically the dairy industry is looking to expand its market and the United States Department of Agriculture (USDA) is looking to expand the agricultural economy and they become very intertwined.”

It helped that the burgeoning field of nutrition science promoted dairy products as essential for both adults and children. “The reason why the dairy industry gets such preferential treatment is its status as this uncontested food in the diet,” Wiley says. “Leading up to the Second World War, dairy was used in this very patriotic way—strengthening our bodies to fight the war.”

With the onset of wartime rationing and shortages leading into the Second World War, there were growing fears about the long-term stability of the United States’ food supply. As with any commodity, the demand for dairy fluctuates, yet the nature of dairy production makes it challenging to quickly ramp up or down production in response. Lawmakers worried that any blow to the nation’s dairy farmers could lead to drastic shortages down the line.

“In the 1940s, there was a real concern that we were going to have a hard time keeping up with providing the necessities of life,” Novaković says. “One of the efforts was to establish a program by which the government would guarantee a price on a handful of agricultural commodities to encourage production.”

In 1949, the Agricultural Act allowed a government agency to buy up dairy products to stabilize prices. Unlike corn or wheat, however, milk needed to be converted into more shelf-stable forms, specifically butter, dehydrated skim milk powder, and cheese. Since 1916, when James Lewis Kraft patented American cheese, the U.S. had the technology to create a cheese product that could last for years.

Even after the demand for dairy declined in the wake of World War II, the program functioned reasonably well for years. Then, in the 1970s, everything started to go haywire. Over the course of the decade, inflation in the U.S. skyrocketed from 5.5 percent up to 14 percent. With the economy spiraling, President Jimmy Carter promised to raise the collapsing price of milk, saying, “I’m giving dairy farmers an equal break.”

“In the late 1970s, when energy prices went crazy and there was this unbelievable period of inflation, things got a little out of control,” Novaković says. “Government agents were in uncharted territory. The net result of that was overcompensating in using this program to help out farmers, to the point where we wound up creating the most massive dairy surplus in U.S. history.”

During the 1980s, the U.S. government managed to offload its cheese stash. Nevertheless, dairy surpluses still very much exist. Demand for dairy in the U.S. has plummeted 42 percent since 1975, but that hasn’t stopped American farmers from producing more and more of it.

Over the years, the industry has found all sorts of ways to get rid of its excess supply—some more insidious than others. In the 1990s and early 2000s, even as U.S. nutritionists expressed growing concern about saturated fats and rising obesity levels, a marketing firm created and partially funded by the USDA gave millions to fast-food companies such as Taco Bell and Domino’s to push them to increase the amount of cheese on menu items by as much as eightfold. Buoyed by items like Wendy’s “dual Double Melt sandwich concept” and Taco Bell’s steak quesadilla, the organization helped boost cheese sales by more than 30 million pounds.

While the government-owned cheese hoards of the 1970s and ‘80s are largely a thing of the past, the U.S. has still never really figured out what to do with its excess dairy. In 2016, dairy farmers resorted to simply dumping 43 million gallons of milk down the drain. The same year, the USDA bought up $20 million worth of cheese to cut the glut.

And as of March 31, the U.S. still has 1.4 billion pounds of cheese in cold storage—only now it’s owned by private companies. One particularly large pile of it resides in the former limestone quarries underneath Springfield, Missouri, where Kraft Heinz keeps a considerable cache of cheese in these temperature-controlled facilities. The Dairy Farmers of America, which has been using the facility, known as the Springfield Underground, for more than 30 years, currently has 7 million pounds of raw product.

Some of this is normal inventory storage or cheese being aged. Yet part of this cheese mountain represents an enduring surplus—a very literal representation of the dairy industry’s mismatch with the realties of the market.

Argentina's El Impenetrable Opens Up New Options For Its People

How the Capones Strong-Armed Their Way Into the Dairy Business

Al and Ralph may have influenced food safety labeling and your pizza’s cheese.
mountains

On Marajó, the buffaloes outnumber people.
Video • Wonder From Home

A mother’s sweet tradition lives on with this unique memorial.
Silver Lake, Oregon

Eat like a "buckaroo" at this remote restaurant.
Williamsburg, Virginia