The Carolinas' Mysterious Great White Shark Cluster Is Not Mysterious, Not a Cluster - Atlas Obscura 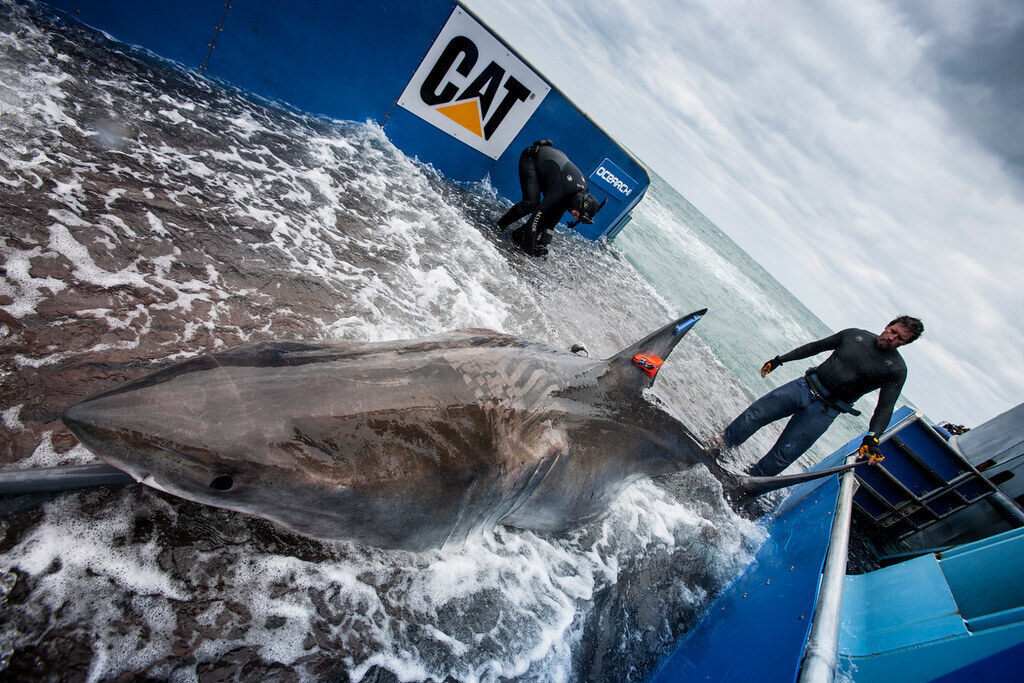 So you want to tag a great white, do you? OCEARCH/CC by 2.0
In This Story
Destination Guide

The headline seemed straight out of the opening crawl of a bad movie. “Cluster of Sharks in One Spot Off Carolinas Coast Grows More Intense, and Mysterious,” read a February 10, 2020, story in The Charlotte Observer. And satellite data seemed to back it up: eight great whites’ tracking devices pinging in waters right off the border of North and South Carolina, with no tagged sharks elsewhere along the East Coast, according to the ocean data nonprofit OCEARCH. The sharks first appeared in the area in late January, but a recent OCEARCH map had seemed to depict them aggregating more closely. “Will they be voting?” wondered Twitter user Jorg Feldstein. “Bermuda Triangle,” commented Facebook user David Clouser.

Fortunately or unfortunately, depending on your perspective, scientists say this mysterious cluster is neither mysterious nor a cluster. “It’s totally expected that the sharks would be there,” says Greg Skomal, a marine biologist at Boston University and the author of The Shark Handbook. “This is what they do.”

It’s not news that great whites love the southeastern coast of the United States. The migratory species has been observed wintering in the waters off the Carolinas and Georgia since the 1980s, Skomal says. “They’re on their normal migration, on their way back up north to cooler waters,” says Brian Dorn, the associate director of the North Carolina Aquarium at Fort Fisher. These waters between the Gulf Stream and the coast are cool and nutrient-rich, and often contain an abundance of prey. The sharks’ migration closely mirrors the migration of baitfish, and while baitfish are too small to be a worthwhile meal for the sharks, the predators that feed on them are the perfect size.

Although eight sharks are clearly visible on OCEARCH’s map, they only seem to be tightly knit because of the scale of the map, which extends from North Carolina to the Bahamas. Closer in, it’s apparent that the sharks are pretty spread out. “This is not a cluster,” Skomal says. A real cluster of sharks is called an aggregation, and one of the best-known aggregations appears off Cape Cod in the summer, including in 2019. “Cape Cod amounts to a 40-mile stretch with hundreds of sharks,” Skomal says. “When you look at the Carolinas, that’s thousands of square miles and just a handful of sharks.” In other words, if you were sitting in a boat at the heart of the cluster, “you’d be hard-pressed to see one,” he adds. Great white sharks are not known to school or socialize, and often hunt across a wide geographic area. Aggregations, when they occur, signal an abundance of of prey, such as the bountiful, blubbery pile of seals that draws them to Cape Cod.

OCEACH’s data spotlights an unexpected problem that great white shark researchers often encounter: The massive fish are actually rather difficult to track. OCEARCH tracks them with tags on their dorsal fins that send pings to satellites—but only when those fins emerge from the water. This kind of tagging works great for marine mammals, such as elephant seals, but sharks have one crucial difference: They don’t need to come up for air. “In order to ping, the tags also have to be out of the surface for several seconds, making it an even rarer occurrence. So sharks are most easily tracked when they’re feeding on species near the surface, especially air-breathing seals. “Great whites do have the unique habit of coming up from underneath seals and knocking them out of the water,” Dorn says.

Some tagged sharks go months without appearing on tracking maps, says Dorn, so most of the time scientists don’t know where they are. And by the time the data are put together, they could be somewhere else entirely; great whites can dive thousands of feet below the surface and swim at 25 miles per hour. Some of the sharks from OCEARCH’s “cluster” could be far away now.

All the challenges in interpreting satellite tagging data begins with tagging them in the first place: a very personal interaction with a very scary fish. “In order to put those tags on the sharks, you have to bait them, capture them, haul them out of the water, and drill the tags into their dorsal fin,” Skomal says, adding, perhaps unnecessarily, “These are not small animals.” It can take hours, by which point the animal is exhausted and potentially acting erratically. They’ll return to normal, but this also means that the tagging needs to take place far from shore and beach goers.

Skomal, who studies great whites when they’re off heavily touristed Cape Cod, uses acoustic tags, which send a ping whenever a shark swims within a couple hundred yards of a receiver. The system can then alert lifeguards, who can pull swimmers out of the water as a precaution. If you do venture out for a crisp February swim, Dorn says to keep an eye out for large schools of baitfish or feeding seabirds in the distance—both signs there could be a shark nearby. “If you’ve gone to the beach your entire life these animals have always been there,” he adds.

The final nail in the coffin of the “mysterious cluster” is that OCEARCH’s tracking team hasn’t been able to spot a great white off the Carolinas for the past three weeks, Skomal says. He chalks up the mysterious cluster’s recent virality as a product of the news cycle. “Sharks are always a fun story,” he says. “People can only listen to so much election coverage.”

The answer could help researchers detect bleaching events before they happen.
oceans

Scientists Tracked Truly Enormous Tuna From Way Up in the Air

Drones helped researchers keep up with fish that are longer than a person and as fast as a car.
nasa

Gaze into the depths of the ocean—from space.
science

The Ocean’s Largest Shark Has a Little Something to Say

An online video raised a strange question: Do whale sharks make sounds? And would it matter if they did?
Video • Object of Intrigue

The apex predators mean a great deal both ecologically and culturally.
Read more
Thanks for sharing!