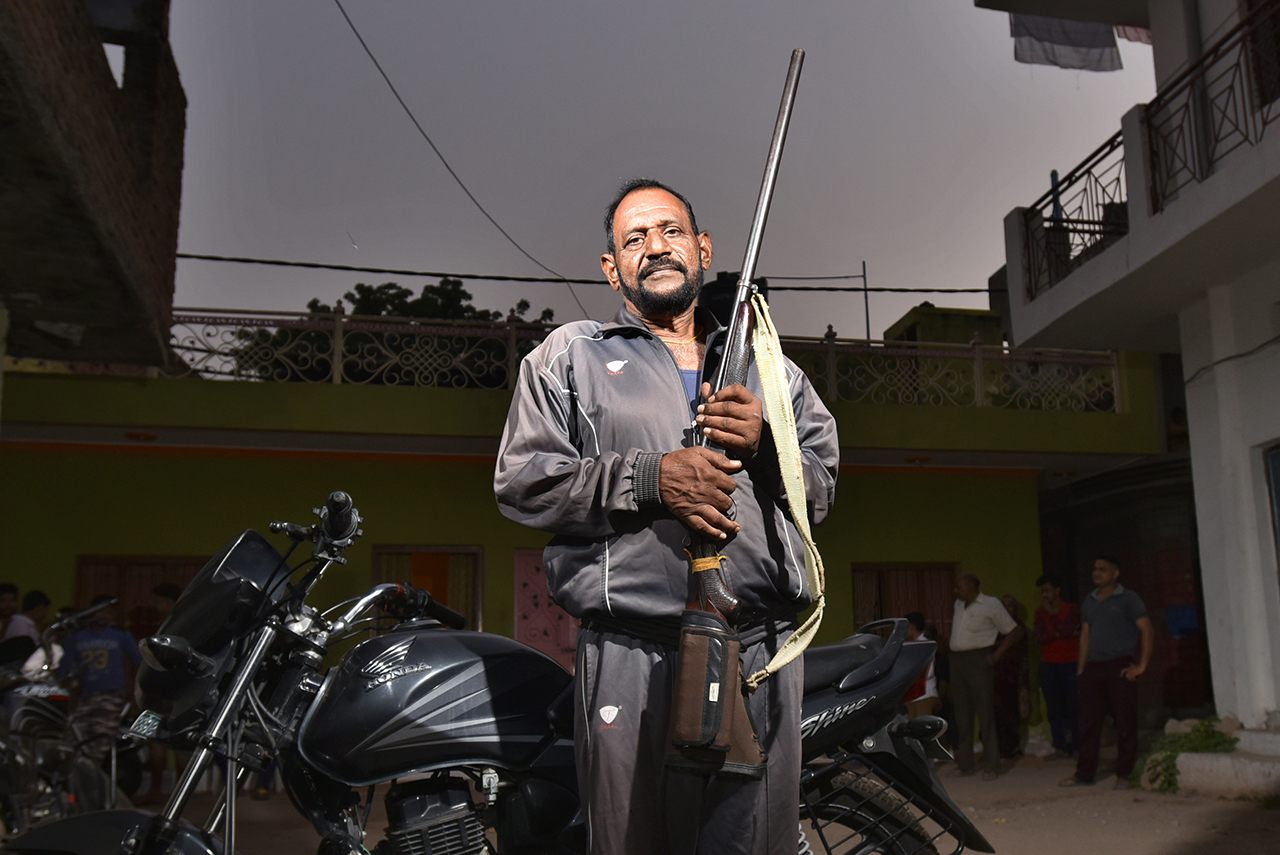 In early November 2020, as voters in the United States went to the polls in a historic election, people in another part of the world were taking part in a democratic process of their own: 16 assembly seats were on the ballot in the Gwalior-Chambal region of the central Indian state of Madhya Pradesh. For days leading up to the election, long lines slithered outside every police station. It was not for early voting. The men in these lines—and they were all men—twirled their mustaches and clutched bolt-action 315 bore rifles with pride. The Model Code of Conduct for elections had kicked in, and every licensed gun holder in the region was required to “surrender” his weapon to the nearest police station for safekeeping during the election. Gwalior-Chambal is home to the largest number of guns per capita in the country, and more than 100,000 of them were deposited with authorities across the region. Elections seem to be the only time that the region’s infamous gun culture, latent most of the year, fully surfaces in the public.

Over the years, the beehads (ravines) of Chambal have acquired a reputation for dacoity, the subcontinental term for armed banditry. According to a paper by M.Z Khan, a criminologist at the Institute of Criminology and Forensic Science in New Delhi, the heyday of the practice was in the 1970s, when dacoits—or baaghis (rebels), as they have insisted on being called—set up their own parallel law and order structures, outside of and as a direct challenge to the state. Since then, most of these dacoits have been caught or killed, or willingly surrendered in exchange for amnesty. But reputations have a way of lingering, and people remain terrified of traveling National Highway 44 through the region at night. “See, I don’t think crime in Chambal today is more than anywhere else. Crime is on the rise everywhere. It’s all in people’s perception,” says a police officer from Gwalior who wishes to remain anonymous. That may well be true, but he couldn’t deny that the people here have an obsession—unhealthy maybe, dangerous perhaps—with guns.

“Every villager has a Scorpio [a locally made 7-seater SUV], a buffalo, and a gun. They will use their Scorpio to tie their buffalo, and they’ll guard both with their gun,” says Gwalior resident Bahadur Khushwa, jokingly. More than 60 percent of gun owners in the region are rural farmers. They usually cite security concerns for gun ownership, but when probed further, most admit that guns are status symbols in a rural society where the power of a household is measured by its firepower.

“We are six people in my family, and we own six Mausers,” says Dharmendra Singh Gurjar, a resident of Behat village in Gwalior district. German arms manufacturer Mauser supplied rifles to India in the early 20th century, and the name has since become a catchall for any 315 bore rifle. The modern Indian 315 bore is actually a civilian version of the British military Lee-Enfield rifle, and is now manufactured in Indian government ordnance factories. Dharmendra says that his village is very peaceful and never sees violence of any kind. In fact, he has never used any of the six “Mausers” in his house. His brother shoots wild animals from time to time, but mostly they are just a warning to intruders: Stay away.

Gun ownership persists in the region’s urban areas as well, where it is primarily related to employment opportunities. If you own your own gun, you’re more likely to get a job as a security guard in an educational or business establishment, and can see a 50 percent increase in salary. In their time off work, these guns also surface during weddings processions, where they are fired in celebratory bursts.

Most locals view the region’s pervasive gun culture as harmless: a subject of indulgence, in part because the guns are so much more for show than they are for firing. “The average local person here is absolutely crazy, it’s true,” says Varun Raj Chaudhary, a local arms and ammunition dealer. “He’ll refuse to buy 1,000-rupee [$14] shoes for his feet. But he can’t do without a 50,000-rupee rifle on his shoulder.” Chaudhary’s gun shop, Dr. Ladha Ram Chaudhary & Sons, is one of the oldest in Gwalior. Opened in 1948 by Chaudhary’s grandfather, the shop has been in his family ever since. However, Chaudhary worries that it’s becoming harder to be a gun shop owner in India.

When the Chaudharys first went into business, there were 150 gun shops in the city. Now there are just 20. “There are so many restrictions on guns now that it’s impossible to do business,” he says. In India, it is legal to own certain types of guns with a license. These licenses are notoriously difficult to get, and involve wading through the bogs of India’s widely feared bureaucracy, and even then probably requires political intervention. “In fact, a politician here comes to power by promising to issue gun licenses for his constituents,” says Girraj Rajoriya, a local journalist from Morena.

Even with a gun license in hand, there are further requirements. For every bullet fired, the empty cartridge must be submitted to the gun shop it was bought from, and the shop then has to submit it to the police. Every month, Chaudhary sends a detailed report to his local police station citing how many weapons he sold, how many bullets were fired, and how many cartridges were returned. The police thus keep track not just of all the firearms in the district, but also all the times they were discharged—which should in theory make it easier to track guns used in the commission of a crime.

In recent years, the national government has further tightened regulations. In December 2019, it passed the Arms (Amendment) Bill, an update to the Arms Act of 1959. The new law, among other things, restricts possession of arms licenses per person (from three to one), increases the punishment for manufacturing prohibited firearms (including semi- and fully automatic guns) from 14 years to life in prison, and makes celebratory firing at weddings and religious ceremonies a criminal offense. “There was a time when we used to open the shop at 6 in the morning, and stay here until 10 pm at night. We used to have so many customers. But now, we come only at 2 pm in the afternoon, drink some tea and leave,” says Chaudhary. “What’s the point? It’s all empty. There’s no customers. Demand for guns is slowly being stifled.”

But not everyone is concerned about a possible decline in the region’s gun culture. “Guns are never about killing people. They are about creating fear,” says writer Annie Zaidi, who has written about the Chambal region. Fear is indeed a familiar emotion for people in villages here; the surfeit of weapons lurks behind every argument. “Since this area has such a bloody history, there are many long-standing rivalries here,” says the anonymous Gwalior police officer. “Someone’s grandfather cut off someone else’s arm, so there’s the possibility of someone else’s grandson coming back to avenge his grandfather. So it’s become like if that guy has six guns, I should have seven guns.” The concern then is that any escalation is bound to prove fatal.

Many of these familial and generational rivalries tend to center on India’s caste system. Caste-based discrimination is prohibited by law, but the old forms of social hierarchy are pernicious, and Chambal has a history of caste-based violence. The largest group of landowners in rural areas come from a privileged minority of what the government calls “Other Backward Classes,” an umbrella term for generally disadvantaged groups. These landowners exercise undue influence in village life, and are known to use their guns to harass other, lower castes. “That’s how it is,” says Zaidi. “Gun-heavy cultures protect societal hierarchies by keeping people in their place.”

There is also the matter of illegal, less traceable guns. Most of these are made in small local workshops and in homes, and sold at throwaway prices. Bhagwan Singh is a resident of Bhidosa village in Chambal, the same village as famed athlete Paan Singh Tomar, who turned to dacoity after a familial land dispute and was subsequently gunned down in 1981. (He was the subject of an award-winning blockbuster biopic in 2012.) “Everyone in our village has licensed guns but no one uses licensed guns for firing,” he says. “When they have to fire, they always use ‘No. 2 guns.’” In Chambal, every house is said to have at least one unlicensed “No. 2 gun.” As it gets harder to buy and use legal weapons, it is thought that No. 2 guns are proliferating unchecked, undermining the country’s gun laws and making it harder to investigate gun-based crime. In fact, according to the Small Arms Survey, some 85 percent of firearms in India are unregistered.

Toward the end of November, after the election results were released and hotly debated, and had faded into irrelevance, the police finally decided to start the laborious process of reuniting the surrendered guns with their owners. Once again, long lines slithered outside the region’s police stations. There was some grumbling that the guns had not been returned in time for Diwali, India’s biggest annual festival, marked by both fireworks and celebratory gunfire. Singh, from Bhidosa village, didn’t grumble as he waited. He was just excited to get his gun back. Like many people in the region, he is nonchalant about the area’s fascination with firearms. Violence is simply part of Chambal’s culture, in its air, in its water, in its genes, he insisted with a shrug. “If not guns, people would just kill each other with something else.”

The Chic Garments Made From WWII Escape Maps

This vibrant culture never faded away in the city's Mexican American community.
weapons

In Japan, School ‘Intruder’ Drills Are Full-Contact and Unpredictable

In response to safety concerns, teachers and staff are trained to subdue and disarm.
crime

You might be able to tell where you are by what happens if you set one ablaze.
crime

Plus Bonnie’s poetry, wanted posters, and a bloodied bandage.
Video

5:01
Want to see fewer ads? Become a Member.
From Around the Web
Atlas Obscura Trips
Delhi and Rajasthan: Colors of India
View This Trip
Thanks for sharing!